It is ironic, comical, and actually fitting that it wasn’t the Centers for Disease Control and Prevention (CDC) that “called” the end to COVID-19 in the U.S.

On Friday, mega retailers Walmart and Costco dropped their in-store mask mandates for both employees and customers who are “fully vaccinated.”

All that is required is a simple “yes” or “no” in response to a health assessment question. I think we all know what that means…

Given the size and scale of both businesses, this was a very intentional move to welcome customers back mask-free.

The ironic part is that these two companies are acting in a far more rational way – based on scientific research – than the CDC itself.

I remember back on March 29 when CDC Director Rochelle Walensky was unnecessarily pandering fear with comments about the “recurring feeling I have of impending doom” when speaking about what she believed was coming.

Those feelings weren’t based on any concrete data related to an explosion in deaths from COVID-19. In fact, COVID-19-related hospitalizations had been plummeting at that time.

Then the next day, she was back on MSNBC, stating, “Our data from the CDC today suggests that vaccinated people do not carry the virus.” I found this comment to be particularly strange because it was positioned as “new data” that the CDC obtained.

It was strange because we already had extensive data from the Phase 3 clinical trials for both the Pfizer/BioNTech and Moderna vaccines that proved this in the fourth quarter of last year.

The vaccines were proven to be highly effective back then, at very large scale, which we know to still be the case now after several months of vaccinations.

And if things couldn’t get more comical, yesterday Walensky claimed, “We now have science that has really just evolved even in the last two weeks that demonstrates that these vaccines are safe, they are effective.”

I couldn’t make this up if I tried. Somehow, this “new” CDC science resulted in updated guidance stating that those who are “fully vaccinated” no longer need to wear a mask indoors.

One of these days, the CDC will get the science right as it has left out one of the biggest and most well-understood scientific truths…

Scientific research has shown that those who have already caught the COVID-19 virus and recovered from it have built natural immunity that is as strong, if not better, than any immunity conferred by a COVID-19 vaccine.

And we’ve already scientifically proven that natural immunity lasts longer than a vaccine.

So why different rules for those who have natural immunity versus those who have had a vaccine? It’s completely irrational, highly discriminatory, and not based on scientific research at all.

Which is why it is so ironic that Walmart and Costco are the ones that understand the scientific research. That’s why they are using the honor system for employees and customers who visit their stores.

They understand that anyone who is at risk and willing to take a vaccine has likely already received the vaccine. And the rest of us have either had it or aren’t at any real risk at all.

I’m impressed that they were bold enough to make the announcement.

With more than 274 million doses administered in the U.S. already, I would argue that they could have done it much sooner.

But I know I’ll remember this as the turning point when the nation’s populace shows it has had enough of this nonsense… With people like Fauci trying to tell us that maybe, just possibly, we’ll be back to normal by next Mother’s Day.

Either way, I know where I’ll be shopping this week.

Space is now open for business…

Regular readers will be familiar with Blue Origin’s story. When we checked in on the company last month, it had just completed its 15th and final test flight. And that paves the way for the real deal…

On July 20, Blue Origin will fly its first four-person crew to space aboard the reusable rocket called New Shepard. 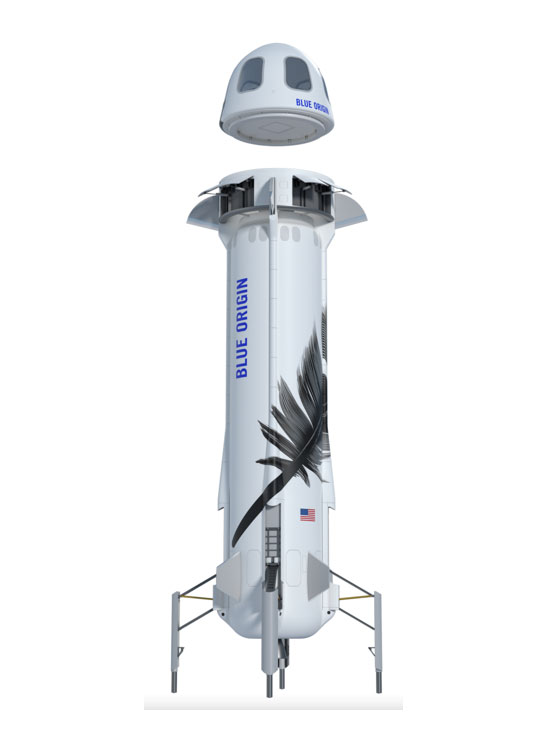 This mission comes exactly 52 years after Apollo 11 – the mission that put Neil Armstrong and Buzz Aldrin on the Moon.

The New Shepard’s crew will consist of three astronauts. As for the fourth crew member?

Blue Origin is auctioning off the seat to the general public. How exciting is that?

And even more interesting is the auction process.

Blue Origin is holding its auction in three stages. The first stage is a sealed online bidding that takes place from May 5 –19. Stage 2 then reveals the bids. Anyone who wants to stay in the running will have to exceed the highest bid. The final stage will then conclude with a live online auction on June 12.

We can expect the bidding process to gather some fanfare and command a high price. For an idea of how high the bidding might go, we can look at Space X’s upcoming Inspiration 4 mission.

Inspiration 4 is an all-civilian orbital mission taking place using Space X’s Crew Dragon Capsule. It is expected to launch around September this year.

That mission was bought out by Jared Isaacman, CEO of digital payments company Shift4 Payments. Isaacman has already donated $100 million to St. Jude Children’s Research per the bid requirements.

And Isaacman is looking to raise another $100 million on top of that. Talk about an expensive trip.

There is one big difference between Blue Origin’s upcoming flight and Inspiration 4, however.

Where Inspiration 4 will spend several days in orbit, Blue Origin will fly just above the Kármán line for four to five minutes – the altitude where space begins – and then return to Earth safely.

So it will be interesting to see how much this seat goes for. I expect it won’t exceed the $200 million that Inspiration 4 commanded. But we’ll see how the auction plays out. If I had to take a wild guess, I’d say the seat will go for somewhere between $10–15 million.

And like SpaceX, Blue Origin plans to donate the funds received from the winning bid. Blue Origin will contribute the winning bid to its nonprofit, Club for the Future. The foundation’s mission is to inspire future generations to pursue careers in science, technology, engineering, and math (STEM).

So let’s mark July 20 on our calendars. Readers can expect an update in these pages after the launch is complete.

The next generation of the internet just launched…

An important blockchain project just went live earlier this month. And it could be the future of the internet…

And the list of backers is quite impressive. It includes names like Andreessen Horowitz, Polychain Capital, and Fenbushi Capital.

As for the blockchain project, Dfinity is often referred to as Ethereum’s crazy sister. And it has steadily received new funding since its inception. This tells me that the team has been making great progress over the years.

Dfinity’s vision is to completely disrupt how the internet operates. It seeks to build out the infrastructure of a new, decentralized internet.

Right now, much of the internet we know relies on various cloud hosting providers such as Google Cloud and Amazon Web Services (AWS). And as we have seen recently, these companies can completely shut down the websites and platforms running on their servers if they want to.

Dfinity looks to change this by creating a blockchain-based global network to support software applications and data. We can think of it as a decentralized cloud-computing network. It will be the first serious alternative to centralized hosting services like Google Cloud and AWS.

This is a key building block of the next generation of the internet: Web 3.0.

As it stands, Dfinity currently maintains 48 data centers, which are running 1,300 nodes across North America, Europe, and Asia. And by the end of the year, there are plans in place for 123 data centers running 4,300 nodes.

The size and scale of the data centers is nowhere near what Google and Amazon offer today. But this is just the beginning of this new internet architecture.

It won’t change overnight, but it will grow exponentially for at least the next decade as this new infrastructure is built out.

The benefit for users is that Dfinity will be completely censorship-resistant. No centralized entity will be able to shut down sites and platforms on a whim – all while reaping massive profits in the process.

And Dfinity will deliver computing power and cloud storage capacity at a fraction of the cost of what the big tech companies offer today. It will also be “hackproof.”

As a blockchain project, Dfinity naturally has its own digital asset. Its native token is called ICP, which stands for Internet Computer Protocol.

This is one of the most exciting and anticipated projects coming out of the digital asset space. And with Dfinity looking to go after one of the largest profit centers in the world – cloud computing – we can expect to hear a lot more about this project in the months to come.

We’ll end today with an insight from the payment processor Square that highlights just how popular bitcoin has become.

Regular readers know this company well. As we have discussed before, Square has been developing its Cash App to make itself a top player in the digital assets space.

Square’s Cash App is one of the best payment applications available today. The design is clean. It’s simple to use. And it enables users to send dollars back and forth, just like top competitor Venmo. But that’s only the beginning…

Square’s Cash App also allows users to buy and sell digital assets like bitcoin. And it makes dealing with digital assets so simple that anyone can do it. The Cash App is much easier to use than many digital asset wallets out there.

And Square recently released its first-quarter earnings report. The report provided some incredible numbers on just how popular bitcoin has become on the Cash App.

What’s more, bitcoin revenue made up 70% of Square’s revenue for the entire quarter. And this resulted in the company taking home $75 million in gross profit.

This is incredible growth driven by customer demand for bitcoin and digital assets in general. And it goes to show us just how mainstream digital assets are becoming.

So the popularity of cryptocurrencies and digital assets is certainly growing. Readers can expect to hear a lot more about this trend from Brownstone Research in the months to come.

P.S. Some recent headlines have spooked the market… Investors have panicked and sold, and prices in one key area have dropped as a result. And that’s great news…

Why? Because this is a major overreaction. And it’s taking place in one of the most interesting spaces I’ve seen in decades. This unique opportunity is giving investors the chance to invest in companies early. That’s rare these days.

I don’t know how long this price window will last. But I’m sure it won’t be long before Wall Street realizes how much money has been left on the table. That’s why I’m hosting an Emergency Briefing on Wednesday, May 26, at 8 p.m. ET.

I’m going to tell you all about what these investments are… and how you can get in on this timely opportunity. I’ll even be giving away a free recommendation to attendees, no strings attached.

So please, go right here to reserve your spot. I don’t want any of my readers to miss out.