Tonight’s the night. I’m going to pull back the curtain on my system for trading “timed stocks.”

Timed stocks are stocks that go public with a “timer” attached to their share prices. That’s thanks to a government mandate. When the timer hits zero, these stocks can climb hundreds of percent in a matter of days and sometimes hours.

We are talking about a tiny universe of publicly traded stocks that can generate venture capital-like returns for everyday investors. And I mean that. Some of my readers recently booked gains of 432% in just 41 days by investing in a single timed stock.

And here’s the best part – these are small companies that very few people know about. Wall Street isn’t on their trail yet. They are too small for hedge funds to get into. And most retail investors don’t know they exist.

Yet we can buy and sell these stocks with just a few clicks in our brokerage account. It’s simple.

I spent five years crafting a proprietary system to identify and trade these timed stocks. And tonight, I’m going to reveal what “timed stocks” are, why they explode when the timer goes off, and how you can add them to your portfolio today.

In fact, I have identified four timed stocks set to hit zero within the next two months. We can expect massive gains to follow.

It’s all going down at 8 p.m. ET tonight at what we are calling the Timed Stocks Summit. Simply go right here to reserve your spot.

And now let’s get to today’s insights…

Get ready for a digital dollar…

Former Commodity Futures Trading Commission (CFTC) chairman Christopher Giancarlo just announced that he is creating a nonprofit think tank called the Digital Dollar Foundation. The purpose is to promote the idea of converting the dollar into a fully electronic currency based on blockchain technology.

This is a big announcement. Given Giancarlo’s time at the CFTC, he understands how the financial regulatory world works.

And Giancarlo believes the U.S. risks losing its competitive advantage if it doesn’t convert the dollar to a digital currency. He views this fundamentally as an infrastructure issue… something that underlies the competitiveness of the U.S. financial system.

Now that global finance is purely digital, it only makes sense to upgrade our digital infrastructure. Those who fail to do so will fall behind.

Giancarlo is especially concerned about the U.S. falling behind China, which is already working on a digital renminbi. And as I wrote late last year, I expect China to launch its digital currency this year.

The Chamber is hosting the D.C. Blockchain Summit in March. There, Giancarlo will be speaking on the topic of a digital dollar.

Now, the idea of having a digital dollar isn’t new. It’s been under discussion for years now. Some have referred to this as “FedCoin.”

And that’s because this idea is attractive to governments. A digital dollar will provide transparency.

Every transaction will be recorded on a blockchain. The government will always know how its currency is being used.

That makes illicit transactions easier to track. And it will allow governments to capture a larger percentage of tax revenue because they will have a record of every transaction. Anonymous cash-based transactions will be a thing of the past.

Obviously, all central governments would prefer this kind of a system, as it gives them more control. And just to be clear, I’m not suggesting that this is a good thing…

Here’s my prediction: China will launch a digital renminbi in 2020. If the digital currency is widely adopted, especially with trade partners, it will light a fire under the U.S. to make the transition as well.

A digital dollar won’t be far behind.

How would you like to be a “shareholder” in a National Basketball Association (NBA) player’s contract? That’s now an option.

Brooklyn Nets guard Spencer Dinwiddie just created something called an income share agreement (ISA) based on his NBA contract. Here’s how it works…

Instead of waiting three years to realize all his earnings, Dinwiddie issued a $13.5 million blockchain-based ISA, hoping to raise those funds up-front. In return, he will pay interest to investors as his checks come in.

Dinwiddie “tokenized” his contract, converting it into a security token that will trade on the DREAM Fan Shares platform. This is a platform that runs on top of the Ethereum blockchain. Its goal is to allow fans to directly invest in their favorite athletes, artists, and influencers.

We can think of ISAs like we think of bonds. They pay dividends at an agreed-on interest rate for a specific time period. Then, when the ISA matures, the issuer must repay the original investment.

The difference is that ISAs are represented by security tokens trading on a digital asset exchange.

Security tokens provide holders with certain rights and ownership interests. In the U.S., the Securities and Exchange Commission (SEC) regulates them.

I have been waiting for years to see security tokens come to life. They make perfect sense. An ISA is attractive to a professional because he or she can receive up-front liquidity on a highly secure contract. This provides immediate cash to buy a house or to invest in a business.

And ISAs have a natural pool of investors – Dinwiddie’s fans, for example – who want to support and invest in the issuer’s future. Owning the security token could also include opportunities to meet Dinwiddie himself, VIP passes, and so on.

This is going to be an exciting market.

And NBA contracts won’t be the only thing tokenized…

We will see movies, television shows, songs, art, classic cars, commercial real estate, student loans, and many other assets trading as ISAs and security tokens on the blockchain.

This is going to be a vibrant ecosystem. Tokenizing real-world assets will change investing forever.

The early stage startup that may kill privacy forever…

And we will wrap up today with words of caution…

The curious story of an early stage company called Clearview AI came across my desk recently. This is a company that started off with what sounded like good intentions… but may very well have destroyed privacy as we know it.

Hoan Ton-That, an Australian technologist, developed an AI system that allows users to snap a picture of anyone and then compare that picture to a massive online database to determine who the person is.

The idea was to help certain industries improve their security and potentially better understand consumer preferences and behaviors.

For example, suppose someone with an outstanding arrest warrant checked into a hotel. With this tool, management would be notified so the proper action could be taken.

That may sound reasonable. But the tech is being used in a much broader way.

And it starts with how Clearview AI is building its database of pictures. The company is “scraping” pictures from publicly available resources on the internet, including top social media sites.

In other words, it uses bots that are designed to capture any and all pictures they can find. There’s no discretion.

Clearview AI is also documenting where each picture comes from. When someone uses the system, Clearview AI not only identifies the person in question but also provides links to all public photos of the person. That allows users to gain access to all kinds of personal information about the person they are searching for.

And get this… Despite being founded in July 2018, Clearview AI has already amassed a database of three billion pictures with accompanying links.

To put this in perspective, the FBI has a database of only 411 million pictures. That means Clearview built a database that is more than seven times bigger than the FBI’s in just 18 months.

While the data that Clearview captured is certainly not as detailed as what the FBI has on file, it is still incredible what Clearview has done in such a short period of time. 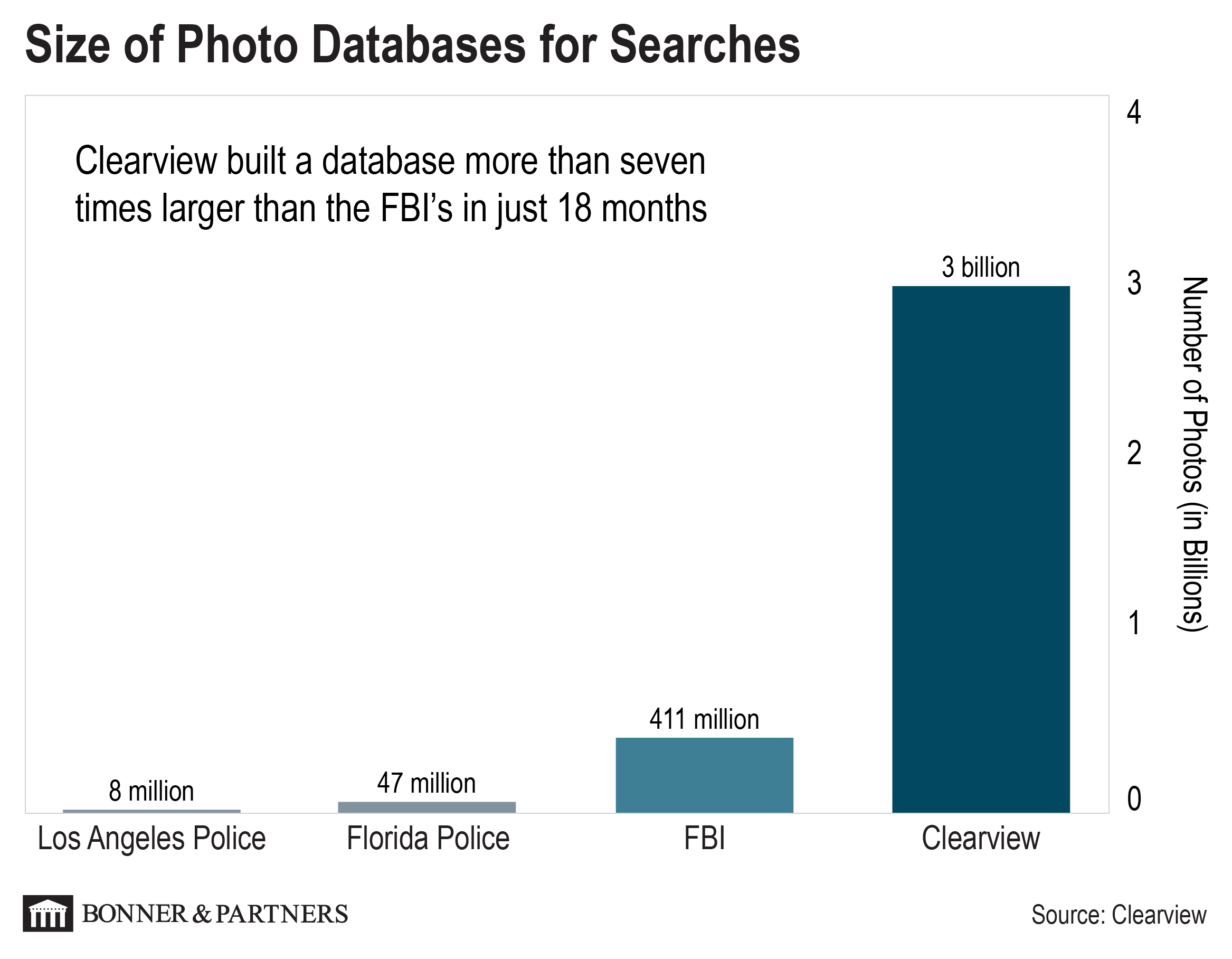 Obviously, there are severe implications here. If there’s a picture of us online, we are almost certainly in Clearview’s database. The potential for abuse is huge.

More than 600 law enforcement agencies across the U.S. have been using Clearview since last year. Apparently, these agencies don’t know how Clearview works. They just know it’s the largest picture database in the world.

But here’s a scary thought – there’s no way to confirm that Clearview’s matches are 100% accurate.

What happens when people start getting arrested just because they look like someone else who committed a crime?

Plus, this system isn’t limited to law enforcement.

Imagine stalkers having access to this tool. They could snap a picture of their targets and identify them using Clearview AI. That would allow them to track down work and home addresses. It’s frightening to think about.

So it’s not hard to envision this technology being used to empower the very people it was intended to thwart. As I’ve said before, using technology in an ethical way will be one of the greatest challenges that humanity will face in the years ahead.