Before we get to our insights today, I would like to invite you to join me for an exclusive private briefing on Wednesday, February 16, at 8 p.m. ET.

It’s been an incredibly volatile start to the new year, and I know many investors are worried. We’ve all had to stomach some paper losses in our portfolio over the last few months. And subscribers are asking… Is the bull market over? Is it time to sell?

We should all be asking ourselves these questions. But I don’t believe now is the time to sell and wait for a broad turnaround…

Though volatility is affecting the stock markets right now, I see a major catalyst on the horizon. It will accelerate one of the most influential tech megatrends we follow here in The Bleeding Edge. This is a trend that’s coming fast, and we need to be ready to profit from it.

So, on February 16, at 8 p.m. ET, I’ll share what I see coming and what we should do about it. Simply put, we’ll talk about what to buy, what to hold, and what to sell.

And I’ll also reveal my 100X plan to capitalize on the next technology megatrend. It could help investors turn every $1 into $100.

So please set aside some time to join me this Wednesday, February 16. We’ll get started at 8 p.m. ET sharp. Readers can go right here to reserve a spot.

Predicting your face based on just DNA with AI…

An Israeli startup called Corsight AI just announced plans to launch what has already become a very controversial product. It’s called “DNA to Face.” And as the name implies, it uses artificial intelligence (AI) to generate a picture of someone’s face using just a DNA sample.

And the results were remarkable.

Source: Proceedings of the National Academy of Sciences of the United States of America (PNAS)

It’s remarkable how accurate these are. What’s more, the AI also accurately predicted the person’s age based on their DNA.

This was polarizing research at the time. A large part of the scientific community was impressed with the results. The other part had a very visceral emotional response. This was the crowd that attempted to come up with very weak reasons for why the research was not accurate.

Yet now Corsight AI is bringing similar technology back to the forefront and productizing it. This is the facial recognition division of a larger AI company called Cortica.

And its goal is to provide services to law enforcement agencies. And as we saw with our discussion on Clearview AI last week, law enforcement is moving fast to adopt this kind of tech.

If police obtain DNA samples from a crime scene but have no other evidence, Corsight AI’s technology will produce an image to predict what the person involved looks like. It’s like having a sketch artist “draw” a picture of the person without any eyewitness. Then agents could run the image through a facial recognition database to find a match.

Of course, we have the same risks at play here as with Clearview AI.

Mainly, the tech isn’t 100% accurate. The generated faces are close, but they aren’t an exact match. We certainly don’t want people wrongly arrested based on these nuances.

But it’s easy to understand how technology like this might assist in finding a list of suspects that match the image. At that stage, a positive match could be determined with a simple DNA test.

That said, this tech is out in the wild now. There’s nothing any of us can do to stop that. And as we have already seen with Clearview AI, once technology like this is in the hands of law enforcement, it’s nearly impossible to remove it. It becomes too useful.

Bleeding-edge technologies like genetic sequencing and AI are now enabling applications that sounded like science fiction just five or 10 years ago. This is something that’s only going to accelerate in the coming years.

And as I said last week, our decisions around the ethical use of these technologies are critical going forward…

Sony takes aim at Microsoft in the gaming sphere…

Another major deal in the gaming industry caught my eye. Sony just moved to acquire game developer Bungie for $3.6 billion.

This is very much a shot at Microsoft…

If we remember, Microsoft owns the Xbox gaming platform. And it just struck a deal to acquire gaming giant Activision Blizzard for $68.7 billion last month.

That would be Microsoft’s largest acquisition ever. It’s clear that Microsoft is positioning itself to become the “Netflix of gaming.”

And if the deal clears antitrust concerns, Microsoft will own the Call of Duty series. Call of Duty is one of the most successful gaming franchises of all time.

Sony produces the PlayStation console, a direct competitor to the Xbox. And it likely envisioned a scenario where Microsoft would make its high-end gaming content available only on the Xbox.

So with its acquisition of Bungie, Sony is angling for some leverage by sending a not-so-subtle message: “We can play this game too.”

If Microsoft tries to make content exclusive to the Xbox, Sony is prepared to counter. After all, Sony owns some great gaming titles as well. In reality, the acquisition of Bungie is very much a defensive move to show Microsoft that it needs to play fair. Otherwise, there will be repercussions.

Plus, by acquiring Bungie, Sony will control the hit franchise Destiny. Destiny is an online game similar to Call of Duty. And the sequel, Destiny 2, is the sixth most popular game for the PlayStation 5.

We are seeing some major jockeying for position going on here. Both Sony and Microsoft want to keep the best games available on their platforms. While it’s common to have some exclusive games, that hasn’t included popular franchises like Destiny and Call of Duty – at least not yet.

Bigger picture, this rush of mergers and acquisitions (M&A) activity demonstrates just how hot the gaming industry is.

In fact, 2022 is already a record year for gaming M&A. And it’s only February. 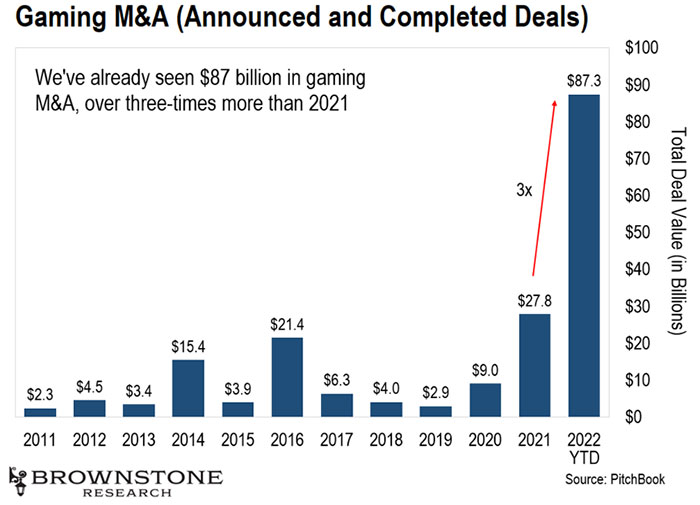 And this speaks to something that I’ve mentioned before.

Those of us farther along in our careers can often look at gaming as something that is primarily for kids… but as investors that would be a mistake. This is an incredibly high growth market, with strong investment implications.

And thanks to the pandemic, the demographics for gamers have widened significantly.

And with all this jockeying for position through M&A right now, any game developer could be an acquisition target this year. Electronic Arts, Epic Games, Roblox, Square Enix, Ubisoft, and others are attractive targets.

And this deal is a sign of things to come…

Think about this – Warner Music Group is the third-largest music label in the world. Ed Sheeran, Green Day, and Dua Lipa are just a few of the label’s top artists.

So the fact that a prominent label like Warner Music Group is building in a metaverse shows just how big this trend is.

Here’s a look at the label’s new venue in The Sandbox: 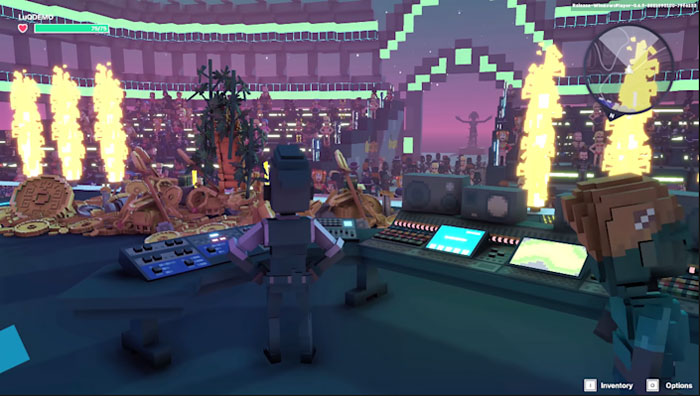 Here we can see that Warner Music Group’s concert venue is massive. In fact, it looks more like a musical theme park than a regular venue. The picture above doesn’t do it justice.

And we’ll see it put to work this year.

We can expect some of Warner Music’s biggest artists to host concerts on stage in this venue. These artists could perform using virtual avatars, as depicted in the image above. Or Warner could livestream a real show to the virtual space.

The potential here is massive.

But if Warner Music Group hosts a concert at its venue in The Sandbox, it could broadcast to millions of people at the same time. Physical seating limits become a thing of the past.

For starters, Warner Music Group’s concert revenue would likely skyrocket. It could reduce ticket prices yet sell millions of tickets rather than tens of thousands.

Plus, this would provide a new level of access to music fans around the world. Fans could beam into these virtual concerts right from the comfort of their own homes. That’s simply unprecedented.

What’s more, nosebleed seats could become a thing of the past. Through livestreaming, Warner Music Group could provide everybody with a front-row seat perspective.

And there’s another interesting dynamic at play here…

To build its concert venue in The Sandbox, Warner Music Group needed to buy the virtual land it sits on. As mentioned, land is sold in the form of non-fungible tokens (NFTs).

Well, the label bought a lot more land than it needed for the venue. Now it’s selling plots of land around the concert space to music fans who would like to have their own “home” right next to the venue.

This is exactly what famous rapper Snoop Dogg did with the plots around his virtual mansion in The Sandbox. It’s a great way to drive engagement among fans.

Metaverses are still in their very early days, but activity like this shows just how limitless their potential is. We can expect this trend to remain red-hot this year.

And we’ll continue to share the best investments in the metaverse space as they develop. To learn more about this trend, please go here for more information…