By the time we’re all reading this, we will probably have news from the Federal Reserve on interest rates.

While the expectation has been well set on a 25-basis point reduction, we’ll really be watching for any indication of the future direction of any further cuts. More on this in tomorrow’s Bleeding Edge.

But before we get to today’s insights, I just wanted to remind readers one last time about my friend and colleague Teeka Tiwari’s free cryptocurrency presentation tonight at 8 p.m. ET.

As I mentioned on Monday, one of the things I like most about Teeka’s research is the attention he gives to risk management and proper position sizing. As somebody who’s been deeply involved in cryptocurrencies for years, I know how critically important this is for investors in this space.

If you’re interested in cryptocurrencies, then I recommend you hear what Teeka has to say. Reserve your spot right here.

There was a hidden announcement in Apple’s iPhone 11 product launch last week. It wasn’t publicized… But on a screen during a presentation, Apple announced a new ultra-wideband chip called the U1. Apple deployed this chip in all the iPhone 11s.

Apple’s Presentation Revealed the U1 Chip 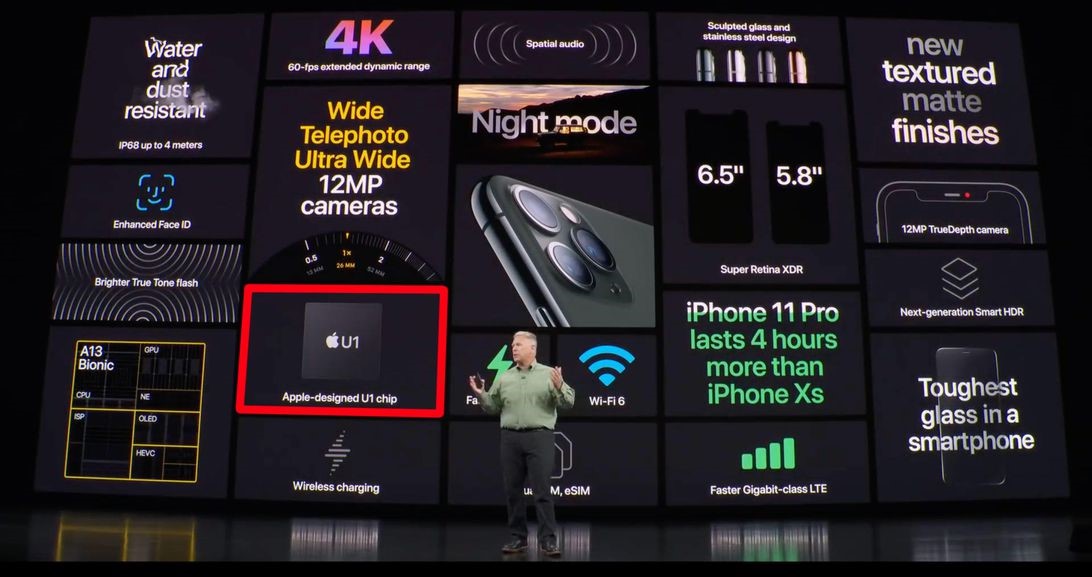 The mainstream press hardly covered it, but this has immense implications…

Ultra-wideband (UWB) is bleeding edge technology. It is designed for close-range connections between devices. It is similar to Bluetooth in this way… except much faster. One thousand times faster, in fact.

This tech will enable other devices to interact with our iPhones automatically… with no input from us. And that is going to unlock an explosion of new services for Apple. The technical capabilities of UWB give us a window into the kinds of services that Apple will target.

Imagine arriving home… Our front door automatically unlocks itself for us. The smart lock recognizes our iPhone approaching and unlocks the door. No more need for house keys. No need to take our phone out, open up an application, press on a button, and wait like we do with digital hotel keys today.

We go inside our house, and the lights turn on for us as we walk through our home. And they turn off in each room as we exit. No more need to flip the light switch.

We sit down in front of our TV… And it recognizes us. It turns on and all our preferences pop up on the screen…

Ultra-wideband tech will power a connected world that ties in nicely with many of Apple’s existing products today. And these examples just scratch the surface.

UWB was also designed with cryptography in mind, so it will be significantly more secure than technology like Bluetooth.

So I see Apple seeding its iPhone 11s with the U1 chip. It was quiet about this because it knows the iPhone 11 won’t drive upgrades. Only consumers who have iPhones older than three years old or who really like leading-edge mobile phone cameras are going to be looking at the $1,000-plus upgrade to the iPhone 11.

As we know, the 5G-enabled iPhone 12 will generate the massive refresh cycle next year.

And I expect Apple to announce a suite of compelling ultra-wideband services as part of the iPhone 12 product launch next year. That’s going to send the buzz into hyperdrive… and cause a spike in iPhone upgrades for the first time in years.

(Apple isn’t the only smartphone maker launching a 5G-enabled phone. Every major consumer electronics company on the planet is launching its own 5G devices. And every single one of these devices – they will number in the billions – will depend on an essential component to connect to 5G. I’ve spotted the company that provides that component. This is a stock that investors will want to own. More details here.)

The “unstoppable” cyberattack is live…

The cyberattackers send a text message to the mobile phone number of their target. Once received, that text message downloads software onto the phone’s SIM card, giving the attacker full control over the phone.

As we can imagine, this attack could be used for all sorts of nefarious purposes. It would be quite easy to impersonate the target and spread false information this way.

The firm believes that Simjacker has been on the loose for at least two years. It was developed by a private company that works with nation-states for espionage.

And it identified that in one country, 100–150 phone numbers are targeted every day for this attack. We don’t know which country… or who the targets are. But we can assume they are people high up in government and military.

And here’s the worst part… The target has no way to know that they’ve been hacked. There’s nothing that tips them off.

Even worse, there’s no good way to stop it. Wireless networks can try to detect and block these attacks, but they can’t stop them all.

About the only thing that we can do is create new security software that runs on SIM cards. Yet developing the software is one thing… but replacing every SIM card is another. It would take years.

That’s why top-tier cybersecurity firms make terrific investments in these uncertain times. We just closed out a great investment in cybersecurity company CyberArk for a triple-digit gain in Exponential Tech Investor.

And we have another portfolio holding that was just acquired by a large IT company for another great profit (paid-up readers can catch up here and here).

Cybersecurity technology is full of nuance and may be difficult to understand, but it is a great place to invest. Technology investors like us need to be paying close attention to this industry.

This was something we covered in these pages. And it turns out there is more to the story…

Waymo was running manned tests of its self-driving cars back in 2013. In those tests, Waymo had employees sit in the driver seat while its cars drove themselves around town.

The company told employees that they could take their hands off the wheel but they must stay alert. This was a hard rule. Employees were supposed to keep their eyes on the road at all times.

Once they trusted the car, employees focused on other things. Many were buried in their phones. Some used their laptops from the drivers’ seat. One used the time to put on makeup. And another fell asleep on the job.

This forced Waymo to cancel the experiment. Remember, this was six years ago. Autonomous driving tech was much less advanced back then. Waymo deemed these tests too dangerous without driver oversight.

That’s when it went all in on fully autonomous vehicles. This is something Tesla understands also. But the traditional carmakers haven’t realized yet.

And the fact that Waymo had people asleep at the wheel in 2013 with no accidents is telling. That shows us that fully autonomous tech had already made great progress back then. And we know the tech has advanced tremendously since…

Self-driving cars are much closer than people realize. The technology is working now. It may not be everywhere, but it is being used in more places than we might think.

I fully expect that we’ll see the rise of autonomous vehicles in 2020. This is a trend I’ll be writing about a lot more next year.

And we shouldn’t be surprised if we look over and see more and more cars around us driving themselves… It may take some time to get used to it, but it will fast become the new normal.