Well, we made it to the third quarter.

By now, we see the remarkable impact that $1.6 trillion of stimulus, compliments of the U.S. Federal Reserve, had on U.S. equity markets.

Case in point, the S&P 500 just experienced its best quarter in nearly 22 years. 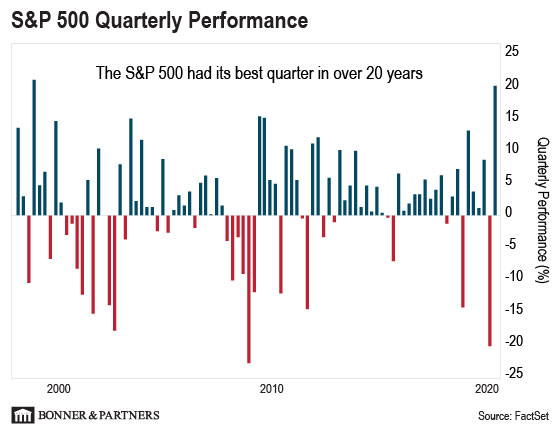 The broad equity index was up an impressive 19.9%. The last time we experienced anything near that number was the fourth quarter of 1998, which enjoyed a 20.9% surge. Of course, that was amid the multiyear technology boom. That’s when a new breed of internet companies was being built.

And readers of The Near Future Report, Exponential Tech Investor, and Early Stage Trader won’t be surprised that the Nasdaq Composite greatly outperformed all other indices at an impressive 30.6% return for the quarter.

We were well-positioned ahead of the pandemic with companies that have vital products used in wired and wireless communications networks, cloud-based software services, and biotechnology companies, which have all thrived in this environment despite the economic challenges caused by the pandemic.

No matter what happens in the fall – a continuation of travel and work restrictions, a second wave, more testing, an early vaccine – I know where we want to be invested. These companies that keep the economy functioning and enable us to stay connected when living and working remotely are precisely where we want to be.

Amazon has been taking a lot of heat for the carbon emissions put out by its massive logistics network. I suspect few consumers stop to think about it, but there is a lot of fuel required for Amazon to get our packages to us on time every day. And critics have claimed that Amazon hasn’t made any effort to reduce its carbon footprint.

And, of course, Amazon stands to benefit tremendously from any breakthroughs that come out of these investments.

With its global fleet of delivery vehicles, any clean energy advancements will have a positive impact on Amazon. Not only will Amazon reduce its carbon emissions, but it may reduce the costs of managing its delivery vehicles as well.

So this is a great initiative. I think the criticism directed at Amazon and founder Jeff Bezos on this matter is unwarranted. If critics took a few minutes to look at what Bezos has been doing, they would realize that he is already investing heavily in clean energy projects.

In fact, Bezos has invested his own money into several private companies working on technology to reduce carbon emissions. And Bezos is invested heavily in a nuclear fusion company through his Family Foundation.

And last year, Amazon cofounded an initiative that aims to be carbon-neutral by 2040. With a couple of key technological breakthroughs, which I believe will happen, I think Amazon will get there much sooner than that.

As regular readers know, nuclear fusion is a technology I have written about quite a bit in these pages. I even wrote a special report about it. Readers can access that report here.

So Bezos has already invested billions into companies that are tackling some of the world’s biggest problems. He is making amazing contributions to society. Sadly, few people recognize the value of the private capital that he has deployed because that never makes the headlines.

It was bound to happen at some point. The first artificial intelligence (AI) has been cast as an actress in a science fiction film. Her name is Erica, and she was created by Japanese scientists.

Embodied in a robotic exoskeleton, Erica is quite life-like. Here’s a picture: 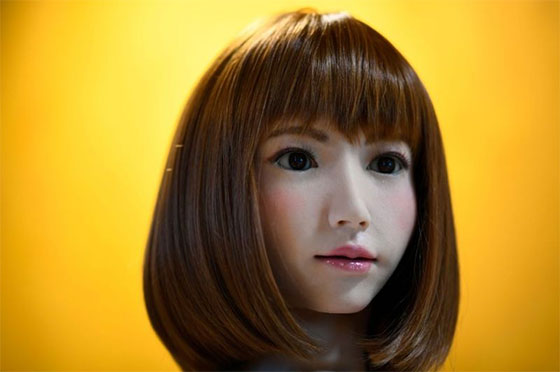 The name of the movie is b, and it’s got some strong backing. Bondit Capital Media, Happy Moon Productions, and New York’s Ten Ten Global Media are partnering to pour $70 million into the movie’s production.

And the plot is compelling. The movie is about a scientist who creates Erica out of his research geared toward perfecting human DNA. But then he discovers dangers associated with his program and must help Erica escape somehow.

So in a sense, Erica is playing itself as an AI-powered exoskeleton in the movie.

The first part of the movie was filmed in Japan last year. The rest of the filming was delayed due to COVID-19, but the team expects to finish filming in Europe by the summer of next year. So it’s still a way off, but b will be a major milestone in the film industry.

I have to warn readers – seeing Erica in action is a little creepy. It is clear that she is a robot. But the conversation is interesting because Erica was taught how to act.

While the robot was originally created to study human-robot interactions, “Erica” was trained to play this role through sessions on body language and simulating emotions.

So this is just another example of the great advancements made in AI over the last few years. AI technology is usually something that we never see. It is a software algorithm. But embodied by a robotic form, whether it is Spot the “dog” or something like Erica, we are going to see and interact with a wide range of technologies.

The rise of AI is a once-in-a-generation trend, and it will lead to some incredible opportunities for us as investors.

Yesterday, we touched on Apple’s shift away from Intel’s x86 semiconductor architecture to ARM’s design for its desktops and laptops. Today, we need to talk about what a big deal this is.

Historically, Apple has been at the mercy of Intel’s silicon roadmap. And we know that Intel has made one misstep after another in recent years, to the detriment of companies like Apple that use its chips.

But it isn’t easy to change semiconductor architecture because these processors are the “brain” of the computer. All software programs are designed to run on them.

Switching to an ARM-based design means that none of the software running on Apple computers right now will work. Think about the programs we use on our computers daily. They each will need to be partly rewritten to function properly on the ARM semiconductor architecture.

So this is a huge undertaking. Microsoft tried to make the move away from Intel in the past but couldn’t pull it off because it was too challenging to rewrite all the software. Microsoft couldn’t get its software partners to do the work.

But this move is necessary for Apple to get away from Intel’s subpar product performance.

Simply put, the ARM-based processors are more powerful and more efficient. They consume less energy and generate less heat. And that will allow Apple to develop thinner laptops that have a longer battery lifespan. I am excited to see the new product designs that Apple releases.

And Apple has a plan to make the transition as smooth as possible. The key is the App Store.

Apple’s iPhones and iPads already run on ARM-based processors. While the computer software is being rewritten, Apple will allow users to download apps from its mobile App Store on their computer. That will be the bridge.

That’s why Apple will succeed where Microsoft failed. Microsoft didn’t have the benefit of a massive app store to tide users over while it made the move.

It will take a few years for Apple to complete the process, but it will be well worth it. Not only will its desktops and laptops be better, but Apple will also be able to integrate seamless interactions among its iPhones, iPads, and computers.

That will make Apple even more “sticky” for consumers. And no doubt the company will come up with some creative ways to leverage this compatibility.

P.S. If investors are looking for exposure to Apple’s new suite of products, there’s a better way than buying Apple stock.

I’ve been preparing my readers for this new consumer electronics boom by recommending key Apple suppliers. One of them is my No. 1 5G stock of 2020. Get all the information here.