Economists were caught flat-footed again, surprised by the strong jobs numbers that came out this morning.

Some media outlets are trying their best to put a bad spin on the numbers, but that’s hard to do given that 4.8 million jobs were added in the U.S. in June, and the jobless rate dropped from 13.3% in May down to 11.1%. 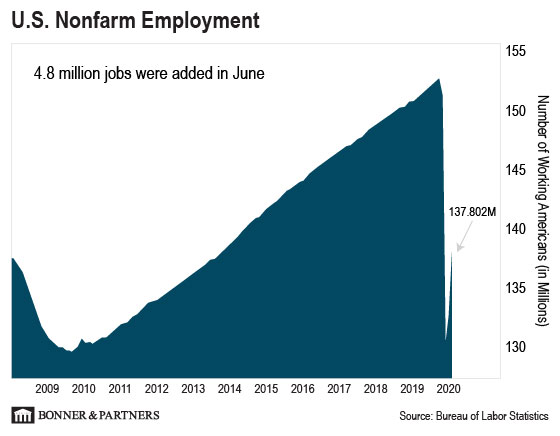 Economists aren’t going to agree with me, but I predict July’s jobless rate will drop below 10%.

The number of new applications for jobless benefits dropped by a small amount to 1.43 million last week. Continuing jobless claims increased by an equally small amount from 19.2 million to 19.3 million compared to the week before.

The labor force participation rate also increased to 61.5% compared to 60.8% in May. For a reference point, pre-pandemic levels were at 63.4%. We’ll get back there. It’s just a matter of time.

I’m not going to hold back. I’m just going to say it. This is all great news for the economy and ultimately the equity markets and investors. There are no “buts” at all.

That may sound like a way off, but it’s not that far out in the auto industry. Typically, car designs are wrapped up about three years in advance. And that’s where we are with this deal. These self-driving Mercedes will go into production in 2023.

Mercedes is the largest premium carmaker in the world. It produced about 2.3 million cars last year. This is a strong endorsement of NVIDIA’s autonomous driving technology by Mercedes. Mercedes is an automotive brand built on quality, performance, and luxury.

This is big news for the industry and a great win for NVIDIA. This multiyear deal with Mercedes will be worth billions for the company.

I remember NVIDIA back in early 2016 when I first recommended the company. It was just in the earliest stages of entering the automotive market, primarily with solutions that support “infotainment” systems in the cars. But those early efforts were the beginning of a much larger strategy for growing its business in the automotive sector.

When announcing this deal, NVIDIA’s CEO Jensen Huang tipped his hat to Tesla for the progress it has made in the industry. And Huang revealed that NVIDIA will implement a similar model whereby software updates can be pushed out to every Mercedes vehicle regularly.

To me, that’s the only way to go. Being able to update self-driving technology at any time is crucial. So I am excited about the work NVIDIA is doing in this space.

And I must report that this is even more bad news for Intel. Starting to see a trend here?

Intel tried to partner with Mercedes on self-driving technology. And Intel spent $15.3 billion to acquire Mobileye as the centerpiece of its autonomous driving ambitions. The acquisition was completed in 2018.

It’s also interesting that Intel invested in Here Global, which is a European mapping company largely owned by Audi, Daimler (Mercedes), Porsche, and BMW. Essentially, Intel was looking to “buy” favor with Daimler and others by providing capital to their jointly owned business.

What just happened with iconic car rental company Hertz is so bizarre that it could only happen in a crazy year like 2020.

The Hertz Corporation, originally known as Rent-a-Car Inc., was founded in 1918. One hundred years later, Hertz ranked 335th in Forbes’ 2018 Fortune 500 list. Talk about a staple of American business.

Well, the run is over.

Hertz saw its business start to decline with the rise of ride-sharing companies like Uber and Lyft. And to stay afloat, Hertz started racking up debt. The company’s debt burden jumped 56% from 2011 to today, hitting $17.1 billion.

Then, with the COVID-19 travel lockdown, Hertz’s business collapsed. The company declared bankruptcy and was about to go into receivership. As a result, its stock price plummeted from $20.29 per share to just $0.55. That’s right – 55 cents. The company was trading at an enterprise value of negative $1.8 billion.

The institutional lenders were getting their ducks in a row to make sure they received their portion of Hertz’s remaining assets in the bankruptcy. But then something bizarre happened…

Suddenly, shares of Hertz (HTZ) started skyrocketing. In a matter of two weeks, the stock traded back up to $5.53 per share. It was a massive 905% gain. That begs the question – who would be foolish enough to buy stock in a bankrupt company? After all, common shareholders are the first to get wiped out in a situation like this…

Well, it turns out that over 150,000 people using Robinhood’s stock trading platform were behind the move. We talked about Robinhood last week. It’s a smartphone app that allows investors – mostly millennials – to trade stocks from their phones.

Clearly, these people buying Hertz have no understanding of a company’s capital structure or the bankruptcy process. As I mentioned, common shareholders are typically wiped out in bankruptcy. They usually get nothing. The secured creditors and bondholders are paid off first.

And here’s where the story gets even loonier…

After watching its share price run up 905%, Hertz came up with a new plan. It proposed to sell $500 million in new stock shares. And why not? If it could get the Robinhood army of day traders to bite, Hertz had shot at avoiding bankruptcy

Of course, the Securities and Exchange Commission quickly stepped in and shut that idea down. It was a blatant attempt to take advantage of people who had no idea what they were doing.

So Hertz is back on the trail to bankruptcy. And it appears the Robinhood traders are wising up. The stock has fallen back down to around $1.40 per share. That means anyone who bought at the recent peak has lost 74% of his or her money.

I would bet that this is the most bizarre story we will see in the world of finance for a while. It’s hard to imagine a crazier scenario unfolding again any time soon. But who knows? We still have half of this crazy year left to go…

And it is incredible to see how much of an impact people trading stocks at home from their phones can have. Historically, the markets have been dominated by big institutions and hedge funds. But in this case, the little guys trading on their smartphones outran them for a time. That’s the power of the digital age.

And while we won’t be investing in Hertz anytime soon, I really like the idea of Bleeding Edge readers getting the upper hand over Wall Street. Normal investors can absolutely beat Wall Street by investing in great companies at attractive prices and recognizing trends before they become common knowledge.

What the newest U.S. dollar stablecoin tells us about the future of finance…

And continuing on the digital theme… We need to talk about an interesting development in the digital asset arena today.

Coinbase and Circle partnered to develop what is now the second-largest stablecoin in the industry. They call it U.S. Dollar Coin (USDC), and there’s about $1 billion parked in the stablecoin right now.

For the benefit of new readers, stablecoins are cryptocurrencies that track the value of a national fiat currency. So 1 USDC will always equal $1 – give or take a few cents.

Stablecoins have taken off this year because they are a great way for cryptocurrency traders to park money on the sidelines.

Moving from a digital asset like Bitcoin or Ethereum and back into U.S. dollars is expensive, and it takes a few days for the transaction to clear. But moving from the same digital assets into USDC is nearly free and can be done almost instantly. That’s why cryptocurrency traders love stablecoins.

But there is more to USDC than meets the eye…

To start with, Coinbase and Circle just launched USDC on a fairly new blockchain called Algorand. This is one of the most promising blockchain projects out there.

Algorand was created by famous cryptographer Silvio Micali out of MIT. Micali won a prestigious Turing Award for his work in computer science. And Micali designed Algorand to improve on the weak points of many other blockchains, including Bitcoin and Ethereum.

What’s more, Bitcoin’s blockchain can only process about four transactions per second. The system gets bogged down when there is a spike in activity.

Algorand solves this problem. Transactions over the Algorand blockchain settle in one minute or less. And it can handle millions of users at the same time. Simply put, Algorand is far more functional than Bitcoin and many other blockchains out there.

And that brings me to the partnership between Coinbase and Circle…

We know Coinbase is a giant in the digital asset space. It has become the Fidelity or T.D. Ameritrade of cryptocurrency. Coinbase’s platform makes investing in digital assets look and feel just like investing in stocks. Plus, Coinbase has all the security and insurance features that a regular brokerage house has.

Then we look at Circle. Circle is backed by financial titan Goldman Sachs. Goldman is deeply plugged into the financial system, and it has key relationships with the Federal Reserve and the U.S. Treasury.

Not only is Goldman invested heavily in Circle, but it also orchestrated Circle’s acquisition of cryptocurrency exchange Poloniex back in 2018.

What this tells us is that the power brokers of the U.S. financial system are positioning themselves for a transition to a purely digital dollar. They are quietly building out the core infrastructure and developing relationships with key players in the digital asset industry like Coinbase to get ready for the big shift.

The writing is on the wall. A move to a purely digital financial system is inevitable. Physical cash will be a thing of the past. It’s just a matter of when.

For us as tech investors, we should get familiar with digital assets and how they work. Buying USDC on Coinbase is an easy way to get started.

One day soon, we’ll likely conduct all our financial affairs with digital assets like USDC.

P.S. Blockchain technology will revolutionize our society the way the internet did more than 20 years ago. Smart investors stand to make a small fortune over the next few years.

But 99% of investors are so distracted with bitcoin and Facebook’s Libra that they are missing the bigger picture. You don’t have to be one of them.

I’ve uncovered a way to profit from the blockchain megatrend without ever downloading a digital wallet or logging onto a cryptocurrency exchange. Click here to see how.