To better understand the impact of the pandemic on consumer trends, I’ve been watching the dynamics between retail versus online commerce.

Adobe Analytics publishes research on the digital economy that helps provide some context. The data includes transactions on 80 of the top 100 online retailers and encompasses more than 1 trillion visits to retail sites. 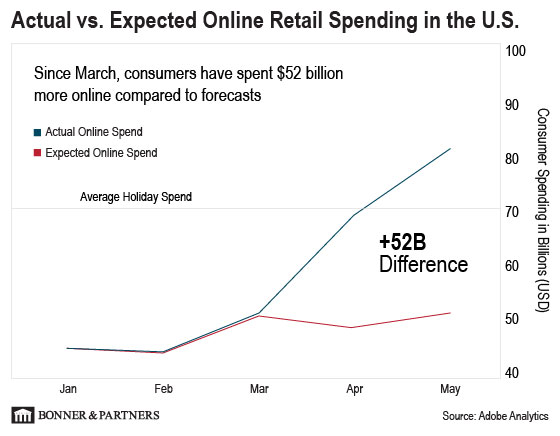 Since March, consumers spent $52 billion more online compared to forecasts. This makes sense. Most people were isolated for the last few months. What is surprising is the magnitude of the jump.

May generated $82.5 billion in online spending, which is nearly 78% higher compared to May last year. And the Memorial Day online spend was up 63% compared to last year, even though there were fewer discounts on average.

Even amid the unemployment numbers in the U.S., these kinds of numbers are far more representative of a healthy economic environment.

I’ll keep an eye on this trend. But for now, our insights…

The next blockbuster biotech IPO…

I have been tracking an early stage company called Sana Biotechnology for two years now. This a company working on engineered cell therapies, which are at the bleeding edge of biotechnology.

We know that many diseases occur when key cells in the body mutate or become damaged. Engineered cell therapies are designed to replace or repair these key cells, thus curing the underlying cause of disease.

It’s a simple idea. But the work is incredibly complex.

Engineered cell therapies must do the job of the cells they are replacing perfectly, and scientists must design them so the human body won’t reject them. We can measure the excitement around Sana by how much money the company has raised from its venture capital backers.

Last week, Sana Biotechnology raised an incredible $432.5 million in an early stage venture capital (VC) round. With this raise, Sana has pulled in over $700 million since its founding in 2018.

That is a massive amount of money for a developmental, pre-revenue company. And there’s a reason why Sana has been able to raise so much money – it is following the Juno Therapeutics playbook.

Celgene acquired Juno Therapeutics, an early stage biotech company, for $9 billion in March 2018. It was a fantastic company that was doing great work on CAR T cell therapies for cancer treatment.

Like Sana, Juno raised a huge amount of venture capital in its first two years as a private company. Then the team quickly took the company public, delivering fast gains to its VC investors.

Now the same VC firms that backed Juno are backing Sana. There’s one simple reason why.

The VCs believe Sana’s executive team is going to deliver once again.

This will likely be Sana Biotechnology’s last VC raise before going public. I wouldn’t be surprised to see the company file for an IPO (initial public offering) before the end of the year or within 12 months at the most.

That makes it a prime company to watch. With Sana, we may have an excellent investment opportunity in the near future.

There is a new No. 1 supercomputer…

Summit has been dethroned as the world’s most powerful supercomputer…

We talked about Summit back in March. That’s when it was put to work analyzing COVID-19’s protein structure. As a reminder, Summit is a U.S.-based supercomputer housed at the Oak Ridge National Laboratory in Tennessee. At the time, it was the world’s most powerful supercomputer.

But Summit has been pushed down to number two on the list. Benchmarked at 148 petaflops, Summit is now the second-fastest supercomputer in the world.

The new No. 1 is Japan’s Fugaku, which operates at 415 petaflops per second. Remember, petaflops refer to a computer’s ability to do one quadrillion calculations per second.

415 petaflops is a mind-boggling amount of computing power. Fugaku is 2.8 times faster than Summit. It’s a big jump.

And what makes Fugaku even more interesting is the fact that its semiconductors are based on ARM’s semiconductor architecture. This has major implications for the industry.

The fact that ARM’s chips are now able to power supercomputers represents a big shift in the industry. And that’s more bad news for Intel.

Apple has already announced that it is going to ditch Intel for ARM’s semiconductor architecture in its desktops and laptops going forward. That was a major vote of confidence.

Now, with ARM’s design powering the world’s top supercomputer, we can expect others in the industry to adopt its technology and move away from Intel in the process. The days of Intel’s old x86 architecture are likely numbered.

New research from one of Saturn’s moons…

We will wrap up today by going back to space. This time we are going to Titan – Saturn’s largest moon.

Titan is unique because it is the only known moon in the solar system with a dense atmosphere. In fact, its atmosphere has similarities to Earth’s.

Titan is also the only other body in our solar system to have liquid bodies on its surface. We already know that Titan has lakes, seas, and rivers of liquid in its polar regions that are mostly made up of liquid methane and ethane.

But what about Titan’s equatorial region? Researchers have identified some bright spots as dried-up lake beds. The images taken from NASA’s Cassini spacecraft are beautiful to look at. 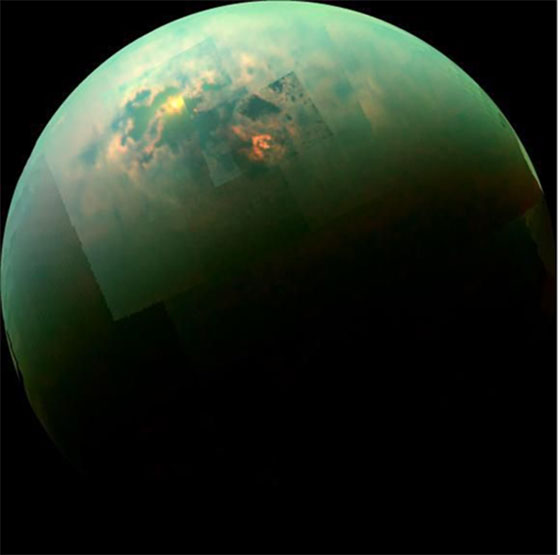 This is incredible news and also supports a longstanding theory that Titan may have a subsurface ocean of water. If this is the case, the implications are exciting.

As we know, water is the key element to sustain life on another planetary body. We can also produce rocket fuel by breaking it down into hydrogen and oxygen.

And Titan has an atmosphere that is full of nitrogen, one of the key elements of the air we breathe on Earth. Its atmosphere is rich with methane and ethane, which could serve as a potential fuel source.

As we talked about last week, we are making great progress toward our goal of putting a manned base on the Moon. And that would be a big first step toward establishing a manned presence on Mars next. Now it appears that Saturn’s Titan would be the logical choice for mankind’s third manned outpost in space.

I believe we have a pretty good chance of seeing it in our lifetimes.