How’s this for confidence?

Jeff Bezos just announced at the crack of dawn this morning that he and his brother will be taking a ride to space on the first manned flight of Blue Origin’s New Shepard spacecraft on July 20.

They will accompany the winner of an auction that is taking place right now. The unsealed online bidding is actually happening today, with the current high bid at $3,200,000.

Current participants in the online bidding have to get their final bids in by 5 p.m. ET if they want to continue on to the final round. The bidding will conclude with a live auction this Saturday, June 12.

The winner will pay for their flight, and the proceeds will go to Blue Origin’s foundation, Club for the Future. This nonprofit organization is focused on inspiring future generations to pursue careers in science, technology, engineering, and mathematics (STEM). Fantastic!

Here’s what the ride will look like from the inside of the spacecraft:

The Interior of New Shepard 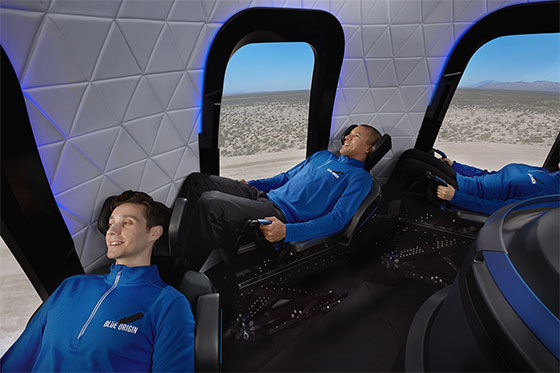 Looks pretty comfortable if you ask me… It might be a bit bumpy on the way up, though. And those windows will make for a fantastic ride.

And after 15 successful test flights, Bezos clearly has confidence that it is going to be a safe flight. That’s one way to send a clear message to the market. Blue Origin is open for business!

It has been quite a race between Blue Origin and Virgin Galactic. Virgin appeared to be ahead of Blue Origin for a couple of years. But a series of setbacks gave Blue Origin just enough time to make the final test flights in preparation for commercial operations.

Richard Branson – another billionaire and the head of Virgin Galactic – has also planned to ride on the next test flight for probably the same reasons as Jeff Bezos.

Either way, we’re months away from the availability of commercial spaceflight. And I can’t wait to find out where in the queue I am on Blue Origin’s waitlist .

The next industry Google is entering…

HCA is a company based in Nashville, TN. It operates 186 hospitals and 2,000 ambulatory sites across 21 states. And it sees nearly 32 million annual patient visits every year. To a company like Google, that represents a treasure trove of data.

The two recently struck a deal that grants Google access to HCA patient records for an undisclosed sum.

Now, I hope everybody understands my sentiment toward Google gaining access to millions of patient records. This is a company whose business model is based on data surveillance, aggregation, and monetization. I don’t expect it to change its practices when it comes to healthcare.

Google has already received public outcry over its prior partnerships with hospital systems Ascension and Mayo Clinic. Both times, Google was able to access patient identities. That’s why I have my reservations here…

The deal comes with the standard caveats that patient records will not include anything that can tie the data to the individual… But can we believe this?

Beyond the potential privacy infringements, one thing is clear: Google is serious about getting into the electronic healthcare records industry. If successful, this would be a major threat to industry incumbents Cerner and Epic.

Google is positioning itself to offer an interface or portal for individuals to access their personal records. This would potentially enable healthcare record portability.

We can all relate to the problem Google is working to solve. Each time we see a new doctor, we start fresh. This means filling out long health history forms that ask for detailed info about vaccinations, surgeries, and family health issues.

It is not only inconvenient – it’s a poor use of time. And inevitably, those of us with a history of medical procedures often forget the details of what was done and when.

This deal can be the catalyst for change that the healthcare records industry needs.

And if Google can deliver a modern, clean, and simple-to-use system that replaces legacy systems, the data giant will get a head start in providing new data services to the $3 trillion healthcare sector.

I can’t wait for healthcare record portability. I just hope Google isn’t the one to figure it out.

The future is in the code…

Business payment processor Square just gave us a glimpse of its future road map… in just a few lines of code.

In its recent release of code for Apple’s iPhone and iPad, the company references “Square Checking” and “Square Savings” accounts. This hints at a future integration of banking services with Square’s existing debit card for businesses.

And it makes sense. This news follows the release from a year ago that announced Square had received its banking charter.

The charter gives Square the ability to provide small business loans without relying on third parties. And given its unique position to know real-time cash flow and inventory via its payment services, it can make more informed decisions than legacy banks.

What’s more, Square can lean on this detailed data by using its applied machine learning to make loan decisions in a matter of seconds with a high degree of success.

And while most assumed the bank charter would simply allow Square to provide new services to businesses, this latest news shows that Square is looking to extend its offerings to retail as well.

Square has yet to launch these services. But when it does, it’ll likely be done similarly to how it launched its Venmo rival Cash App… silently.

And just recently, Square unveiled that its Cash App fueled its own first-quarter revenue of $5.1 billion, up from $1.38 billion a year ago. That highlights the opportunity retail exhibits for Square.

The success of Cash App and Square’s payment processor are indications of how the company innovates on traditional models. And with this latest news, Square looks ready to upend traditional financial services.

And the market noticed… The stock jumped 5.5% on the news. With this latest development, Square looks to continue its successful multiyear run.

I’ve spoken for a long time about the potential of incredible companies like Square… And we’re now up nearly 180% on this company in our Near Future Report portfolio. I have little doubt even bigger gains are on the way with this latest news.

And if any readers would like to join us as we invest in the best financial technology plays available, then go right here to find out more.

One of Elon Musk’s pet projects has flown under the radar until recently… The Boring Company designs the most advanced boring machines for building underground tunnels.

The focus of the company is to build the fastest and most cost-effective boring machines to date. These are literally massive mechanical machines that bore through the Earth to make a tunnel.

And like the other industries he’s entered, Musk is seeing incredible success.

The company recently completed two underground tunnels below the Las Vegas Convention Center. It took approximately one year to finish.

Typically, projects take years to complete and exceed the budgeted cost. That makes the two 0.8-mile-long underground tunnels a major success. Both were done in a fraction of the time and a fraction of the cost compared to what would be normal in the construction industry.

And the two tunnels are much more than simply holes in the ground.

They include three stations and a track to shuttle convention attendees, making the mile-long convention center less intimidating to navigate. The tunnels can reduce the 45-minute cross-campus walk down to about 90 seconds. 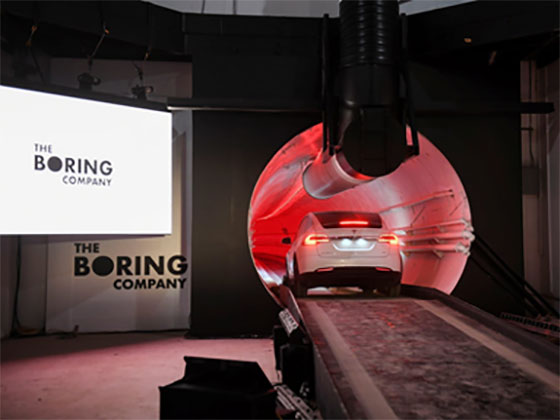 The completion of the tunnels was well-timed for Las Vegas to come back to life from COVID-19 lockdowns.

We can even expect the Consumer Electronics Show, which regularly amasses 180,000 attendees each year, to go live and in person this coming January. And with these tunnels, attendees are sure to have a better experience.

What’s more, the shuttles used to move attendees through the tunnels are Teslas.

Right now, the Teslas operating underground are Model 3 sedans and Model Y and X SUVs. This won’t always be the case. The long-term plans are for Tesla to build custom shuttles to transport more people from one end to the other.

Tesla also plans for the cars to be autonomous and not require human drivers. Right now, riders simply hop into the next available car and drive themselves.

Other plans include extending the tunnels to include the nearby airport and popular Las Vegas Strip. The series of tunnels would radically change how transportation happens in Las Vegas. It would eliminate a lot of the congestion we typically see downtown.

And even without these improvements, The Boring Company is already changing transportation as we see it. And it’s only getting started.