That was the message I saw in my internet browser around 6:45 a.m. this morning while I was working on The Bleeding Edge. 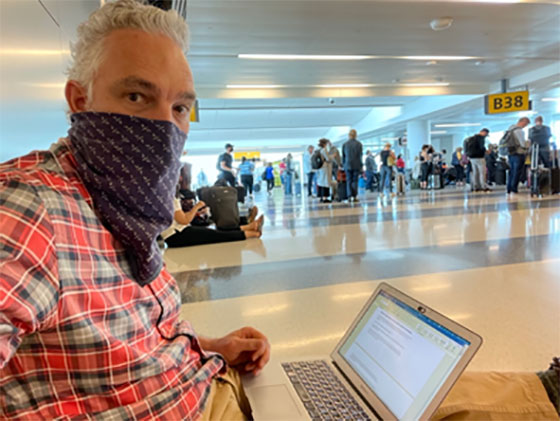 This morning, I was writing from the floor of an airport terminal near my gate. Yes, that’s how and where the work gets done… My “office” is wherever I am on any given day.

And I knew something was wrong this morning. I quickly checked a couple of major websites like The New York Times and CNN… Same error message.

I immediately knew one of the web service providers was down. This error message tells us that a specific website’s server is down. But when it happens on multiple websites, that means that some part of the “internet” is down.

And that’s exactly what happened.

Web service provider Fastly was experiencing an outage in its global network. And it’s a bit comical for reasons that I’ll explain.

Fastly is a content delivery network (CDN). It hosts a website’s content in data centers around the world close to major population centers.

Basically, it will mirror a website and have duplicates all over the place in order to provide resilience, improve download speeds, and avoid congestion.

By having a website hosted in hundreds of locations, it reduces or eliminates the risk of a website ever going completely offline (unless Google or Amazon censor websites, which we witnessed last year).

And this is why it’s a bit funny. Fastly’s network architecture, by design, is decentralized with the purpose of providing resilience. Yet this morning, its global network went down. 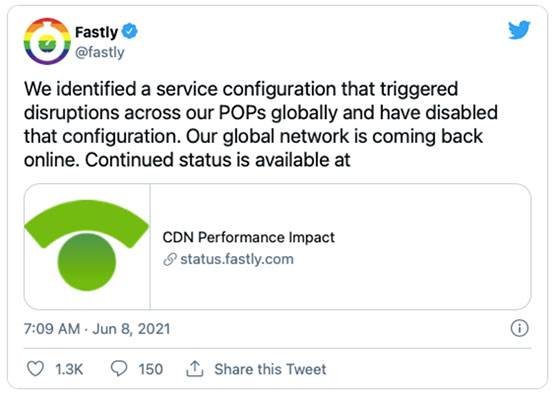 The cause? It wasn’t a cyberattack. There were no power outages. It was a “service configuration” problem that took down the whole network.

It shouldn’t happen, but it did. And this isn’t the first time, nor will it be the last.

And examples like this are the driving force behind the technological developments in the blockchain industry.

An internet that can be controlled by a small number of individuals that have the power to ban, censor, or rewrite history is not what was intended by the original architects of the World Wide Web.

In fact, it’s the opposite.

The blockchain industry has been working hard to solve these problems – to create the next generation of the internet. This has been one of my major areas of research and investment for the last eight years or so.

And I’m working on a special project that I hope to share more about with you in the very near future.

The rise of Boom Supersonic…

This is perhaps the most prominent company working on a next-generation commercial supersonic jet.

Boom’s supersonic jet will be able to reach speeds of Mach 1.7, which is about twice as fast as the commercial airliners in operation today. That means it has the potential to cut air-travel time in half.

What really caught my attention with Boom is how much smart money from the high-tech sphere is backing the company. It has an incredible list of 44 early stage investors. This includes some of the best frontier technology venture capital (VC) firms out there, as well as LinkedIn cofounder Reid Hoffman.

And here’s where it gets exciting – Boom Supersonic just inked a fantastic deal with United Airlines. Per the deal, United agreed to buy 15 of Boom’s supersonic jets for $3 billion. And it has the option to buy 35 additional jets at a later date.

Here’s a look at the design concept:

Boom is scheduled to deliver its first Overture in 2025, with flights occurring in 2026. We’re only a few years away. That’s a fast time line for what has traditionally been a slow-moving industry.

And I can’t overstate how much of a game changer this deal is. It all but guarantees Boom’s success.

As we can imagine, designing and building supersonic jets is incredibly capital intensive. It requires hundreds of millions – possibly over $1 billion – of investment just to get a working supersonic jet ready for flight.

And there’s no opportunity to generate operating revenue until the finished product is ready.

That makes investing in this kind of company a massive risk for VCs and early stage investors.

Take Aerion Supersonic – one of Boom’s primary competitors – as a case in point. Aerion Supersonic abruptly shut down a few weeks ago because it ran out of money and couldn’t raise any more capital. Its backers were tapped out, and it couldn’t find new ones.

But Aerion wasn’t backed by the kind of high-tech investors that we track in The Bleeding Edge. Instead, it was backed primarily by Boeing and the Florida government. When the funds dried up, Aerion was out of luck.

Boom Supersonic won’t meet the same fate. This purchase agreement with United Airlines signals to investors that its technology is the real deal and that there is a market for its aircraft. With this agreement in hand, Boom’s next VC-funding round will be massive – likely enough to fund development for the next couple of years.

So this is absolutely a company to watch going forward. We can expect to see Boom’s progress accelerate from here.

And those of us who travel frequently can get excited for the prospects of supersonic travel in the coming years. I for one can’t wait to be able to cut my travel from New York to London or San Francisco to Tokyo in half.

The largest VC round in the blockchain industry just happened…

Payment technology company Circle just raised a whopping $440 million in a late-stage venture funding round. This is the largest VC round in history for a blockchain company.

And this raise has significant implications for the industry…

Circle is one of the companies behind U.S. Dollar Coin (USDC). With a circulating supply of $23 billion, USDC is the second-largest U.S. dollar stablecoin on the market today. It trails only Tether (USDT), which currently maintains a supply of $62 billion.

What makes this VC round especially interesting is that there is already talk about Circle going public through a special purpose acquisition corporation (SPAC) shortly after this raise is completed.

As a reminder, a SPAC is a “blank check” company whose sole purpose is to take a private company public. The private company enters a reverse merger with the publicly traded SPAC. It’s an attractive option for private companies because it saves them the expense, time, and headache involved with a traditional initial public offering (IPO).

But in the case of Circle, the timing is telling. The company certainly doesn’t need to raise more money after this massive VC round. So why rush to go public?

The Coinbase direct listing and all the talk surrounding a U.S. central bank digital currency (CBDC) have certainly created a buzz around U.S.-dollar stablecoins.

In fact, I have speculated that the Federal Reserve may want to partner with privately issued stablecoins as part of its CBDC initiative. [To learn more about this and the coming reset of our financial system,go right here for the details.]

We talked about how Facebook’s Diem may be a candidate here. Could it be that Circle is in the mix, too?

That wouldn’t surprise me given its close ties to Goldman Sachs. We know the Federal Reserve is very comfortable working with Goldman within the confines of the legacy financial system. It would make sense for the two to extend this partnership to the realm of U.S. dollar-backed stablecoins.

But for Circle to play an increased role in the Fed’s plans for a digital dollar, it would need more transparency. And that’s exactly what going public provides.

If it does reverse merge into a SPAC, Circle will start filing its financial statements with the Securities and Exchange Commission (SEC) every quarter.

This will provide the needed transparency with regards to Circle’s financial health and the reserves used to provide backing for its U.S. dollar stablecoins.

So this is something we’ll be watching closely.

I’m going to predict that Circle will go public before the year is out. The timing makes sense, and it would be huge news for the blockchain industry. And it may indeed confirm my suspicions regarding the Fed’s plans for its CBDC.

GPT-3 could make everyone a computer programmer…

We’ll wrap up today with an exciting update on OpenAI’s GPT-3.

To bring new readers up to speed, OpenAI started as a nonprofit research institute in 2015. Then it spun out a for-profit commercial arm in 2019.

And GPT-3 is OpenAI’s prized product. This is an AI-enabled text generator that has Silicon Valley humming.

At the simplest level, GPT-3 can complete our sentences as we type. But that’s only the start…

GPT-3 has written entire technical manuals. It can write short stories on command with only a small prompt like, “Bob went to the carnival and won a stuffed animal for his daughter.”

And most recently, Microsoft Word integrated GPT-3 into its software. As users type in Word, the AI will offer to complete the sentences. This move came after Microsoft secured an exclusive license for the GPT-3 code.

And this week, Microsoft just revealed its next application for GPT-3. It’s going to help non-programmers program software. This development couldn’t come at a better time.

In the U.S. alone, there are about one million open jobs for computer programmers today that haven’t been filled. We are facing a massive shortage of coders in this country.

GPT-3 will help solve this problem. Here’s how:

Here we can see someone working with a large database. Historically, this is something that would require the user to type in command-line code to achieve the desired results.

But in this case, the user begins typing what they would like to reference using descriptive language. And GPT-3 autocompletes with software code what the person was looking for. Incredible!

This technology can empower employees without a background in coding to become computer programmers. It’s basically digital process automation for coding. This kind of automation dramatically reduces costs and improves productivity.

And it’s part of a major movement in Silicon Valley right now called “No code.”

And if we think about Microsoft’s suite of Office products, it has been the de facto standard for office productivity. That means Microsoft can roll out this coding autocomplete feature on a worldwide scale overnight.

Talk about a huge development.

This is just the beginning of the employment of this technology. And we can be sure that Google will follow quickly with something similar for its Google Workspace products.

So we will continue to watch GPT-3 developments closely. Adoption is ramping up, and I expect this product will generate significant revenue for OpenAI.

And it will also lead to some exciting new consumer applications that will prove to be extremely useful.