It’s the final call… If you haven’t yet, please RSVP to attend my Silicon Valley “Unlocked” event tonight. We are going live at 8 p.m. ET.

I’ve just returned to Silicon Valley for the first time since COVID-19 hit last spring. And I’m doing “boots on the ground” research to compile a list of tech stocks that are trading at lower valuations than when their private backers invested in them.

I call these companies “Penny IPOs” because they are the best way for normal investors to gain access to tech companies that can still bring explosive returns.

In fact, Penny IPOs are an “end-run” around the venture capitalists and private equity sharks who have distorted the IPO markets and intentionally kept the biggest gains to themselves, effectively locking out normal investors.

They are one of the few ways for everyday investors to turn the tables on the institutions that have rigged the game against them. That’s a topic we have covered extensively here in The Bleeding Edge.

Simply put, these Penny IPOs are one of the last avenues that everyday investors have to generate life-changing gains from early stage public companies.

They are the closest thing I’ve found to “turning back the clock” to a time when retail investors could actually get in on the hottest tech startups long before they changed the world.

And that’s why I’m excited to loop readers in on what I’ve uncovered in the Valley. I’ve put together a list of the best Penny IPOs out there today, and I’m ready to share it with my readers.

For those who are serious about building a portfolio of explosive tech companies, please join me tonight for Silicon Valley “Unlocked” at 8 p.m. ET.

GM is scrambling to keep up with Tesla…

We’ll start off today with an interesting move from General Motors (GM).

We don’t talk about GM very often in these pages. That’s mainly because it really isn’t a bleeding-edge company. In fact, it tends to be quite the opposite.

But GM’s autonomous driving division, Cruise, is an exception.

As we have discussed, Cruise has taken in a lot of outside investment recently. At this point, it’s not clear how much ownership GM retains. GM was unwilling to shoulder all the research and development costs, which is why it allowed so much outside capital to invest.

That said, Cruise just announced that it has secured a $5 billion line of credit from GM’s finance department. This is big money.

For context, a $500 million venture capital (VC) raise would be massive for an early stage self-driving company. Cruise is effectivity taking in 10 times that amount here.

What’s more, Cruise already has over $5 billion in cash on its balance sheet from its last VC raise. That gives it $10 billion+ to invest in developing its self-driving technology.

Part of this funding will go toward building 100 prototypes of Cruise’s first product called Origin. These are autonomous passenger shuttles with no front or back. 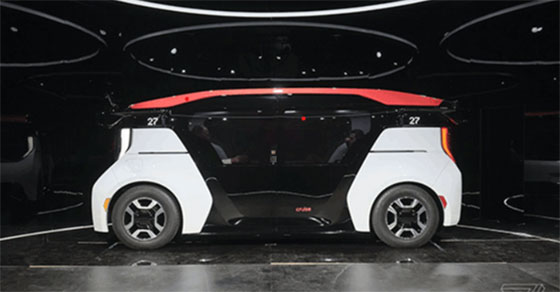 As a reminder, Cruise struck a deal with the Dubai Roads and Transport Authority (RTA) to launch a self-driving taxi service in Dubai by 2023 using these vehicles. That will be the Origin’s debut in less than two years’ time.

Clearly, Cruise has an aggressive road map to launching its self-driving technology.

Meanwhile, GM announced that it will increase its investment in electric vehicles (EVs) and self-driving technology to $35 billion by 2025. That’s a 30% increase over the company’s previous plans.

None of this is a coincidence.

GM thinks that it can leverage and scale the technology that Cruise is developing in an effort to be a major player in the EV and self-driving space.

And make no mistake about it… This is all a last-ditch effort to catch up with Tesla in the U.S. market.

Tesla is years – probably more than half a decade – ahead of the legacy carmakers like GM. GM knows this. And it knows that aggressive investment in technology is its only hope to catch up.

Regular readers already know that my bet is on Tesla and its master plan go here for more details. But the developments with Cruise are absolutely worth keeping an eye on.

And if GM’s stake in Cruise is in fact now less than 50%, it could spin itself out into a publicly traded company in the near future.

Along similar lines as Cruise, Google’s autonomous driving division, Waymo, just raised another $2.5 billion in a late-stage VC round.

The round featured an impressive cast of investors that included Andreessen Horowitz and Tiger Global Management. And here’s what really caught my eye – Google’s parent company Alphabet led the funding round.

When a company leads a VC round, that typically means that it took at least half of the funding round for itself. This implies that Alphabet just invested at least $1.25 billion into Waymo.

And for Waymo, this raise comes on the back of its $3 billion funding round last summer.

Put the two together, and Waymo is sitting on over $5 billion in capital. And just like Cruise, Waymo will use these funds to aggressively push its road map forward.

It’s clear to me that Google wants to maintain a very large majority stake in Waymo. This stands in stark contrast to GM’s approach with Cruise. We’ll see why in a moment.

Because of this, it wasn’t surprising for me to see that several senior executives at Waymo have left the company in recent months. This includes the departure of CEO John Krafcik back in April. This is telling.

Waymo’s top executives left because Google has been clearly signaling that it isn’t going to spin Waymo out into an independent company. It wants to keep the self-driving startup for itself and under tight control.

That means Waymo’s execs are going to remain under Google’s thumb. And there will be no major exit opportunity – like an IPO – for the executives to look forward to. In other words, their earnings potential is capped.

And this speaks to Google’s true ambitions.

That would give Google access to consumers even when they’re in their cars on their daily commutes. This is a window in which consumers have largely escaped Google’s data surveillance, other than GPS tracking.

With Waymo-powered cars, Google could surveil passengers, collect data, and even serve ads to passengers while they are traveling in self-driving cars.

It would immensely expand Google’s dossier on individuals. And it would provide an additional hour or more of screen time through which advertising can be served to passengers, which in turn would increase its advertising revenues.

And that’s why Google isn’t terribly concerned about Uber and Lyft. Instead, Google sees Tesla as the biggest threat to its self-driving ambitions. That’s because Tesla develops all of its technology in-house. It will never use another company’s operating system.

From Google’s perspective, Tesla is analogous to Apple in the smartphone industry. This is Android versus iOS all over again.

Google watched helplessly as Apple’s iOS platform – the operating system that powers the iPhone – carved out about a 52% market share in the United States. This severely curtails Google’s access to consumers in the smartphone market.

And Google does not want Tesla to do the same thing in the self-driving market.

So Google is investing heavily in Waymo while maintaining control over the startup in hopes of providing an automotive operating system to car manufacturers so that they can compete with Tesla. This will be a monumental battle to watch in the coming years.

China is lighting a fire under the new space race…

We’ll wrap up today with big news on the space exploration front. China is racing ahead with its plans to build a brand-new space station.

To that end, China just launched three astronauts into space with a 22-ton habitation module. They will be in orbit for three months working on the new space station.

This is the third of 11 planned missions designed to get the new space station operational. Once complete, the station will consist of scientific labs for research as well as a Hubble-class telescope.

And here’s where it gets interesting…

The idea for the NASA-led International Space Station (ISS) was conceived in 1984. The ISS is now decades old. That means the technology is way outdated. It’s why the ISS is scheduled to be decommissioned by 2024.

Obviously, China’s new space station will be built with modern tech. It will be superior and more efficient in that regard. So that raises an interesting question…

Given the competition, will NASA try to extend the life span of the ISS? After all, some in the field have said that it could survive until 2028.

Or will this light a fire under NASA to build its own new space station to replace the ISS?

Alternatively, will this prompt the U.S. to directly support the work that Axiom Space is doing to build a completely private space station that can be made available to NASA?

Whichever result we see, we can be sure that China’s success in space will be a major catalyst for the U.S. space program. It is guaranteed to drive increased investment into space tech companies and give rise to the next generation of aerospace companies.

P.S. Don’t forget to tune in at 8 p.m. ET tonight for Silicon Valley “Unlocked”! Just go right here to make sure you learn the name of my top private Penny IPO for free…