Van’s Note: Van Bryan here, Jeff’s longtime managing editor. From Jeff and all of us here at The Bleeding Edge, we wish readers a happy Memorial Day.

Since the U.S. markets are closed today, we’re sharing a special edition of The Bleeding Edge. As many readers may recall, last August Jeff visited Health Nucleus, a health care program on the bleeding edge of the precision medicine trend.

And while there, he received some shocking news – a prostate cancer diagnosis. Today, he shares an update on his progress and how Health Nucleus is helping empower people to live past 100 in good health.

“You are on the bleeding edge now… you are the science.”

It wasn’t what I was expecting to hear, but I couldn’t have imagined hearing anything better.

I had returned to Health Nucleus for my six-month checkup after discovering I had prostate cancer during what I thought would be just a very detailed, routine health checkup last August.

Last year, I traveled to La Jolla, CA, to the world’s leading center for preventative medicine and human longevity, Health Nucleus. I simply wanted to research the bleeding edge of health care.

So I thought the best way to learn was to actually go through the process myself. It was a way to see and understand the future of health care and human longevity.

It has been a humbling experience, and it wasn’t at all what I expected. I arrived last August feeling great. I was fit, energetic, and unaware of any health issues of any kind. In fact, I hadn’t felt so good in at least a decade.

It wasn’t until I sat down with Dr. David Karow, President and Chief of Radiology at Health Nucleus, after a day of testing that I discovered I wasn’t so healthy after all.

My liver fat was above 25%. My body mass index (BMI) was 34.2. I had dangerous levels of visceral fat and was likely pre-diabetic. And thanks to Dr. Karow, we discovered that I had prostate cancer.

I was shocked. After all, I thought I was too young and healthy to have cancer. Aside from exercising three to four times a week, I rarely ever ate processed foods, only consumed natural and organic foods, mostly stayed away from sugar, and slept well.

But the cancer was visible to the eye. It wasn’t up for dispute. It was a dark, ominous blob that didn’t look like it belonged.

And it set a series of difficult steps in motion…

After confirming the diagnosis through a biopsy, I put a plan in place with Dr. Karow and my physician at Health Nucleus, Dr. Mona Ezzat-Velinov.

Because we found it early, I had the opportunity to attack the cancer using my own immune system. But in order to do so, I had to make radical changes to my diet and exercise routine.

Instead of weightlifting and kettlebells, I had to make intense cardiovascular exercise the foundation of my weekly routine.

Due to my liver fat and visceral fat levels, I needed to dramatically drop my weight and reduce my visceral fat. The only way that was going to happen was through hard work, several times a week.

I chose rowing, as it uses about 86% of all muscles. And for those willing to row hard, it really burns calories.

After five months of training, I managed to row 10,000 meters in just 41 minutes and 21 seconds. For those who haven’t rowed before, I’ll just say this… It’s not easy. 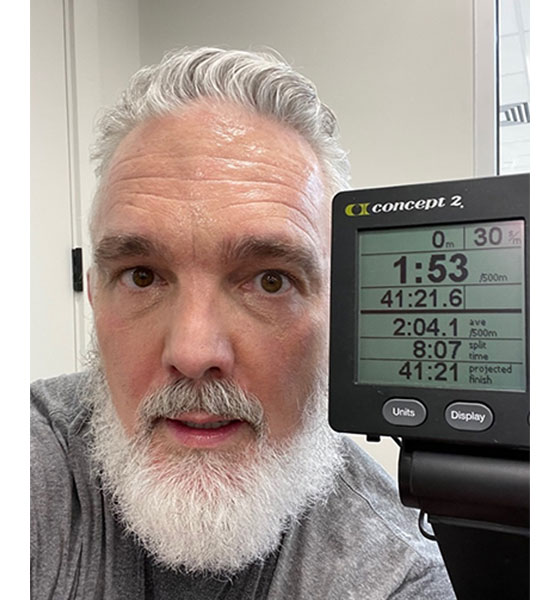 I also radically changed my diet. I stopped eating all gluten, processed sugar, dairy products, and high-glycemic foods. And for the first four months, I cut out any alcohol consumption. I also intermittently fasted every day and reduced my overall caloric intake.

I felt great after six months of really hard work and sacrifice. But the truth was that I had been procrastinating my return visit to Health Nucleus. And if it wasn’t for the persistence of Dr. Ezzat-Velinov, I probably wouldn’t have returned in February.

I was scared what the tests would show. I knew my lab results would show a dramatic improvement, and that my liver fat and visceral fat had dropped, but I had no idea about the cancer.

And the most devastating thought that I had was… After all this sacrifice, what if there was no positive impact on the cancer? In other words, it may have been all for nothing.

Fortunately, that wasn’t the case.

Great News From the Health Nucleus

I sat down with Dr. Karow and Dr. Ezzat-Velinov after completing my tests. Dr. Karow said, “I have good news and more good news.” That was a good way to start.

My numbers were fantastic. I dropped my liver fat from above 25% to just 5.2%. They told me they had never seen anyone do that so quickly.

My BMI had dropped to a healthy level at 29.7. And I had dropped 4.28 liters of abdominal fat and 45 pounds of weight from my peak.

But the incredible news was that the tumor had not grown and, most importantly, the MR imaging biomarker of tumor aggressiveness had actually improved. By making these lifestyle changes, I had actually started the process of reversing the cancer.

When Dr. Karow showed the images to me and explained what had happened, I broke down and cried.

It wasn’t that I was scared of death. I had just been worried that the cancer would have grown and required more aggressive treatment, which would have unwanted, lifelong consequences.

The results were precisely the motivation that I needed to keep fighting it and potentially reverse the cancer entirely.

That’s why “I am the science” right now. We’re trying to prove that with the right lifestyle, nutrition, and exercise, we can empower our bodies to do something remarkable… and ultimately live past 100 in good health.

I continue to focus on further reducing my visceral fat and liver fat, and we’re working on improving my gut microbiome. These things are critical to having a strong immune system. And I’m now supplementing my routine with regular infrared sauna therapy.

The second six months have been much easier than the first six. My body has adjusted, and the truth is that I feel like I’m in my twenties again. And my mental acuity feels sharper than ever before.

And unlike this February, I can’t wait to return for my next visit in August. I plan on returning every six months until I have this thing beat. That way, we can make adjustments along the way and show evidence of the impact that my changes are having on reversing the cancer.

If I made this much progress in the first six months, I know that I can do so much more.

I’ve met and heard from many Bleeding Edge readers who have already gone to Health Nucleus.

It’s incredible and motivating to me that so many have taken advantage of this amazing facility, its science, and, of course, the fantastic team there that makes it all happen and stays on the bleeding edge of health and human longevity.