Well, at least one of the two parties got a good deal.

Over the weekend there was some exciting M&A (mergers and acquisitions) activity in high tech. Now a household name, Zoom Video Communications announced that it is acquiring Five9 for an impressive $14.7 billion.

Five9 specializes in software that enables call centers to allow their employees and contractors to work from anywhere. Like Zoom, it enables working from home, and it developed a product that empowers companies with call centers to do exactly that.

The deal is impressive considering the valuation. $14.7 billion represents an enterprise value-to-2021-sales (EV/Sales) ratio of almost 27. From my perspective, that’s a ridiculous price to be paying for Five9 at its current gross margins and growth rate.

Zoom clearly is looking to diversify its own sources of revenues, and obviously offset what is inevitable. After all, most of us will be returning to the office on a regular basis, and the regularity of using Zoom will likely decline materially.

We have to look at the deal itself. It turns out that Zoom’s offer is an all-stock deal. This makes sense for two reasons. Zoom only has about $4.7 billion in cash right now. An all-cash offer would be impossible. It could certainly raise some debt, but it chose to go with the even cheaper option, which is to use its own overpriced stock.

Even after this morning’s pullback, Zoom is still trading for about an EV/Sales of 25. Last fall I predicted that Zoom would drop precipitously from its ridiculous valuations. And that’s what happened. By mid-May, the stock had collapsed by almost 50%.

And it still has room to fall. The company has headwinds now that the pandemic has subsided, and growth is nothing like it used to be. This is why Zoom was smart to make it an all-stock deal even if it overpaid on valuation.

Zoom will fall at least another 40% from current levels before it’s trading at a more reasonable, but still aggressive, valuation. We can imagine how Five9 shareholders might feel when their newly held stock in Zoom Video Communications that they received from the buyout is suddenly worth about half of what it was.

Now we know who will get the better deal.

We will start today with a not so boring topic involving none other than the Boring Company… And news involving its new project near our home office in South Florida.

Readers might remember the last time we touched on Elon Musk’s Boring Company. The company designed the most advanced digging machines available for building underground tunnels. And it has already finished two underground tunnels below the Las Vegas Convention Center in June of this year.

Elon’s Boring Company broke tradition by completing the project in about a year while also staying on budget. It was accomplished at a cost of tens-of-millions… What would normally cost hundreds-of-millions in the traditional construction industry.

It was a leap forward for the tunnel-making industry and a great addition for the convention center – reducing the 45-minute cross-campus walk to approximately two minutes.

And now the latest news has Elon focused on South Florida.

He recently put forth a proposal to make a tunnel from Miami to Fort Lauderdale. And he told the Miami mayor he could do it for about $30 million – about $1 million per mile.

This is a fraction of the previous proposal, which came in at $1 billion. In fact, even if Musk blew his budget by 4x, his proposal would still be 88% cheaper.

This would be a welcomed project for South Florida.

Anyone who has made the drive from Fort Lauderdale to Miami knows just how terrible an endeavor it is in terms of time and traffic. This would ease traffic congestion for the area and likely bring more visitors to both areas.

And Elon Musk is operating on a vision with the Boring Company just like he did with Tesla and SpaceX. He continually delivers on projects that radically disrupt existing legacy industries.

He uses each iteration to demonstrate that progress is being made, even when outsiders see that a rocket ship blew up. By demonstrating the positive momentum, Musk is always able to raise additional capital to keep building. This has been the key to Tesla and SpaceX, and he’ll do it again with the Boring Company.

In the case of Miami-Ft. Lauderdale, it will be a great addition to the area for a fraction of the cost. And no doubt it will be attractive to the tech companies abandoning Silicon Valley in favor of places like Texas and South Florida.

Incumbent construction companies will almost certainly be lobbying against the proposal, but Miami announced companies have 45 days to submit a competing bid, so we will see if any other offers arrive soon. Otherwise, the Boring Company will likely break ground on this project soon after this window closes.

It will be very exciting to see the Boring Company’s technology be used to create its first inter-city project… A radical upgrade to transportation infrastructure is long overdue.

Yandex, the largest technology company in Russia, just announced a strategic partnership with food delivery service Grubhub. The two plan to deliver meals via autonomous robots to students on 250 college campuses across the U.S.

Yandex is not a company we have previously mentioned in The Bleeding Edge. In a general sense, it can be considered Russia’s version of Google. It has emulated the $1.7 trillion technology company in several ways and is the fifth largest search engine in the world.

And similar to Waymo, Google’s self-driving division, Yandex has also been working on its own self-driving technology.

Yandex’s self-driving unit originated via a joint venture with Uber. In September last year, it was spun out so Yandex can double down on the self-driving tech. Since then, we recently learned it has already collected about seven million miles of fully autonomous driving data.

This is exciting news. Since the company is located in Russia, we did not know how far along it was with its technology. We now know its Level 5, fully autonomous driving technology is about three years off. That actually means the company is very close.

And it’s what makes its newest partnership with Grubhub so smart. Yandex can focus on a smaller, simpler task using its self-driving technology in geofenced, largely pedestrian areas like college campuses. That way, it can improve the technology and also offer a commercial service.

It is much easier to deploy autonomous delivery robots in a campus environment than to roll out self-driving cars in an urban environment. College students are a perfect demographic for a service like this. They don’t think twice about ordering online and taking delivery from a robot.

Let’s take a quick look at the delivery robot. Rain, shine, or snow – it can get its job done. 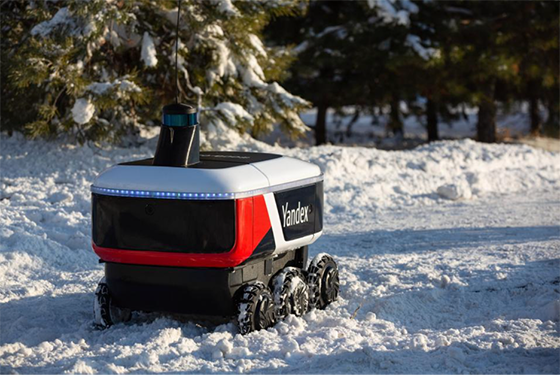 We’re seeing more and more examples of the acceleration of this kind of technology throughout the country.

Delivery robots might not be a trend many of us experience in our everyday lives – yet. But it is clear hotspots are popping up across the country.

This tells us that we can expect to see this trend accelerate in 2022 as delivery robots migrate from these hotspots to a nationwide presence.

And delivery robots are just one piece of the self-driving trend. If any readers want to know how to invest in this space right now, then please go here for my latest recommendations.

This driverless technology is not the future…

Our last story of the day touches on a driverless ride-hailing startup called Halo. It just announced a seemingly autonomous driving service that will launch in Las Vegas later this year.

What caught my eye in this announcement was that the service will still use human drivers even though no one will be in the front seat – so these vehicles won’t be truly self-driving.

The service works similarly to how the military operates drones. Pilots steer drones using a satellite link and various monitors, which let them fly drones anywhere in the world.

Halo’s drivers will operate in a control center with three screens and a steering wheel. Drivers will have all the controls in front of them and drive like they’re in the car.

Here’s how the controls look:

Now, taking the driver out of a car is significant. But this technology defeats the purpose of autonomous vehicles. It doesn’t lower the cost of transporting somebody from point A to point B.

And since drivers are the main reason for 94% of all accidents, the solution is not necessarily a safer alternative.

However, we should note here that this technology is only made possible because of 5G technology. This kind of technology will only work with the lower latency 5G offers. It is what allows somebody remote to operate the vehicle in real-time and respond with minimal delay.

Halo likely chose Las Vegas thanks to its flat terrain. This allows the 5G signal to be delivered with minimal interference while creating a well-defined geofenced area to operate within.

And the company likely chose to go this route because it will be easier for it to get its technology approved by regulators than fully self-driving vehicles.

But I want to be clear here… This is not the future of driverless technology.

It won’t significantly lessen the likelihood of accidents… And it won’t lower costs. So we’ll continue watching companies like Tesla that are working on true autonomous vehicles.

Yet while I don’t see a bright future for Halo’s approach, I do see a use for it in the logistics and distribution business.

Self-driving semitrailers will benefit from this kind of remote driving model. When semitrailers arrive near their destination, I can see where having a human driver take over to dock the truck in the correct bay might make sense. This could be done from a centralized location staffed with highly experienced drivers that can manage a fleet of trucks at the same time.

Most importantly, this application does demonstrate the possibilities of 5G technology. And I expect we’ll see more and more of these applications as we start to hit Phase Three of the 5G rollout, which is happening right now…

P.S. For years, many of us have watched Wall Street reap all the profits… While Main Street merely ekes by. But I’ve just discovered something that could rewrite this script…

It’s a “glitch” in the stock markets. An anomaly that could have helped investors double their money – or more – as many as 17,000 times, according to my research.

And on July 28 at 8 p.m. ET, I’m going to tell everyone about it… As well as give out the name of my top “glitch” stock you can invest in right away.

I’ll also have an important announcement to share with you…

But to find out the full story on this stock market “glitch,” you’ve got to be there. So please go right here to put your name down and claim your free spot to attend my Outlier Investments Summit.

It’s going to be a night to remember…