When a promising early-stage company goes public, it can create historic opportunities for early investors to collect outsized gains.

Back in 1997, Amazon was nowhere near the web retail powerhouse it is today… And there were many who doubted e-commerce would truly take off at all.

We must remember how the early, heady days of the internet made stars of companies like eToys, Pets.com, and so many more… only to bring them crashing down as the dot-com bubble burst in the early 2000s.

We know now that Amazon didn’t go the way of these early failures. And its success would transform the entire retail space for years to come. 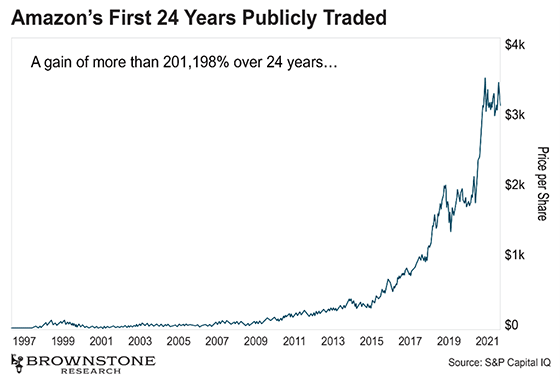 What’s more, any retail investor could have reaped huge gains from an early investment in Amazon.

It was a different era…

But a lot has changed since Amazon went public all those years ago.

Now we see many private companies going public at valuations that simply make no sense. And retail investors no longer have the chance to get in when the price is right. That’s certainly the story with some of the most infamous, recent initial public offerings (IPOs)…

Companies like Amazon used to go public BEFORE they experienced massive growth.

But today’s private companies are no longer doing that…

They’re choosing to stay private longer — and only going public when they’re much larger.

And if we look at the current landscape for IPOs, we’ll see that most companies going public now would guarantee considerable losses.

Simply put, their earliest stages of growth have already passed. Retail investors can only pick up the scraps.

Uber was the premiere IPO of 2019. It went public with an enterprise value of about $75 billion. To put it in context, it was 171 times larger than Amazon was when it IPO’d.

And guess what – practically all of the gains went to private investors.

The stock plunged about 44% in the six months following its IPO. And retail investors who climbed in after the IPO would have only realized gains of about 33%. That’s enough to turn every $1 invested into $1.33. 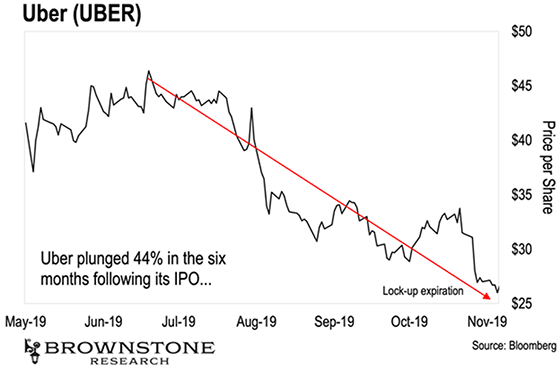 Or take the data management software company Snowflake. Last year, it held its own highly anticipated IPO at a sky-high valuation of more than $65 billion. It ended up being the largest software IPO to date.

But smart investors could see that Snowflake was nothing like Amazon in its earliest days. Snowflake has been around since 2012, building up its valuation in private capital.

By the time Snowflake went public last year, shares had begun trading at more than $240, and its valuation shot up on the initial surge of investment.

But the run-up didn’t last long. Since its IPO, Snowflake’s valuation has dipped from its all-time high of more than $105 billion back in December to about $60 billion today – a fall of more than 40%.

I could go on…

I bring up all these examples to illustrate one simple truth – investing in these overhyped IPOs would’ve meant losing your shirt.

Wall Street overhyped these stocks – and retail investors paid the price for it.

Clearly, these stocks won’t bring much value to investors with an eye toward investing in promising early stage companies. The typical IPO process has steadily morphed into an albatross that retail investors would do well to avoid…

But not in every case.

To help subscribers, I’ve prepared an Emergency Meeting where I’ll share all the details on one of the biggest tech IPO trends of the decade. At this meeting, I’ll tell you all about how one little-known investment vehicle is paving the way for even more profits in the tech sector this year.

It’s all happening Wednesday, May 26, at 8 p.m. ET. Please mark that date on your calendar… and go right here to sign up for my special event.

This is an event you won’t want to miss out on.