The digital asset markets had quite a day yesterday.

I’m sure that at least a few Bleeding Edge subscribers feel like they got punched in the stomach after bitcoin lost about 30% of its value and Ethereum lost about 40% – all within the span of just 24 hours.

For that matter, just about every cryptocurrency fell. It wasn’t pretty.

Even the largest, most well-established exchanges had trouble keeping up with the activity. Coinbase experienced some downtime. Binance paused Ethereum withdrawals. Gemini had lag times, and Kraken had connectivity issues.

The truth is, they all struggled. When everyone wants out fast, even the exchanges are in trouble.

Even with the market action over the last few days, bitcoin is still trading at $39,839. That’s still a fantastic return for those who invested late last year.

Trying to perfectly time tops in a volatile asset class is impossible to do consistently. Investors and traders might get lucky from time to time. However, they almost always miss out on gains and pay more taxes trying.

It’s much easier to consistently buy on fear-driven drops… like the one we’re seeing now. They all feel the same. Large, material drops in a market that give us that sick feeling in our stomach. They make us question whether or not we should be invested.

The same exact thing happened to us in the equity markets back in March of last year. As an analyst, I dove right in.

I double-checked my assumptions, assessed the market, re-evaluated my assumptions on the economic outlook, and I made a very unpopular decision… I removed all stop losses and got my subscribers ready to buy.

The drop was temporary. I knew it would spring back quickly after the panic dissipated, and the markets would return to normal.

And we made a fortune. We bought fantastic companies at great valuations right at the bottom. We were already well-positioned with stocks that would thrive in the tech-driven economy during the pandemic.

The digital asset and cryptocurrency markets are the definition of bleeding-edge technology – they comprise an emerging asset class. And that means even higher levels of volatility should be expected.

And with all the emerging technologies and emerging markets, it means we are still early in the game. The best gains are ahead of us.

I’m starting to get really excited.

Before we get to our insights, I’d mention there’s another asset class that has recently experienced a pullback.

But where there’s panic in the markets… I’m already seeing an amazing opportunity taking shape for early investors in one sector. In fact, our list of potential tech investments is actually growing.

And it’s all based on one of the biggest investment trends of this year.

What we’re seeing take shape is a new tech IPO boom. And right now, we have the chance to invest in the most promising early stage tech companies while their biggest growth days are still ahead.

If you’re interested in learning more… You can
sign up right here for a special event I’ve put together. It’s all happening next Wednesday, May 26, at 8 p.m. ET.

I want to make sure all my Bleeding Edge readers have the chance to reserve their seats today. So please go right here to ensure you don’t miss out on this exclusive opportunity.

Google is approaching the holy grail of quantum computing…

We’ll start off today by checking in on Google’s annual I/O developer conference, which kicked off on Tuesday this week. This conference is always worth dropping in on given Google’s size, scale, and ambition.

And this year certainly did not lack for excitement.

If we recall, Google announced that it had reached quantum supremacy back in September 2019. That was the point at which Google’s quantum computer could outperform the most powerful classical supercomputer on Earth.

Let’s break this down a little bit…

A key challenge with quantum computing today is “noise” in the system. The noise impedes the computer’s ability to produce 100% accurate answers every time.

An error-corrected, universal quantum computer can correct for any “noise” in the system. It will be able to perform calculations essentially without errors.

And a universal quantum computer can be used for any purpose. It won’t be limited to certain applications.

This is the endgame of quantum computing.

An error-corrected, universal quantum computer with one million qubits would employ an extraordinary level of computing power. There’s no doubt it would be capable of solving our world’s most difficult and complex problems.

It’s almost impossible for us to understand the implications of this. That’s especially true when we think about artificial intelligence (AI) and machine learning (ML) running on such a powerful computer. A powerful quantum computer like this would change our world in ways we couldn’t possibly predict.

And Google seems to have no doubt about its ability to get there. The company said it knows exactly how to execute its product road map by 2029.

And I believe them… All of the building blocks exist today.

So this is a very exciting development. We’re only eight years away.

And this will certainly spur a lot of investment into the entire quantum computing industry. That’s something we’ll want to watch closely.

And for my money, I think there are a few other companies that will beat Google to a universal quantum computer.

The main challengers are still private today, so not many people know about them. But they will make excellent investment targets at some point in the near future.

Google is taking aim at Zoom…

The other big announcement from Google’s I/O conference was Project Starline. This is an interesting post-pandemic technology. And I think it is highly relevant from a practical and cultural perspective after what we’ve just been through.

With Project Starline, Google paired cameras and a booth with light-field display technology to create a new medium for videoconferences. It’s designed to make it look like users are sitting right across the table from each other. 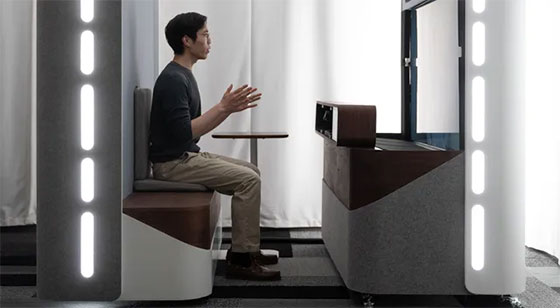 The chair is facing several cameras loaded with 3D-sensing technology and a 3D display screen. This setup enables an incredibly realistic experience, not unlike virtual reality (VR). The only difference is that no bulky goggles or headsets are needed.

This image below gives us a sense of how lifelike Project Starline interactions are: 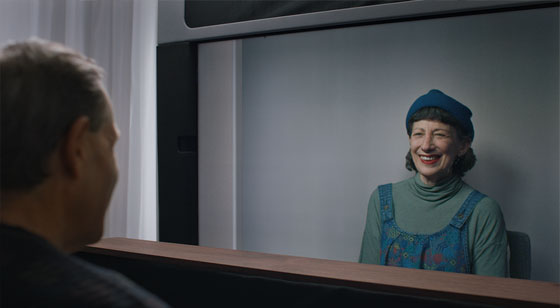 This is a marked improvement over Zoom’s technology. And it solves several key problems.

For one, Project Starline allows us to interact with a 3D image of the person we are speaking to. When the person leans forward, we can actually sense that they have moved closer to us.

And Google has designed this product with clever camera placement so the two speakers always appear to be looking at each other. In other words, the camera placements have been done in a way that allows us to actually look into someone’s eyes and for them to do the same. This isn’t possible by placing a single camera on top of our laptop or desktop using Zoom.

I think that this product could be very successful if Google does commercialize it. I can envision office complexes installing a row of these booths to enable team members to meet face-to-face with colleagues working from home or in other office locations.

I also think that this product would be well received by those who would prefer to continue working from home. Many people have reoriented their homes so that they have one or even two dedicated home office spaces. This device could fit right into a home office.

And it could help employees negotiate a more permanent work-from-home arrangement, even after COVID-19 is fully in the rearview mirror.

So Project Starline could potentially eat into Zoom’s videoconference market share in a big way. I’m a little surprised the company hasn’t proposed something like this already.

Of course, the downside is that this would greatly enhance Google’s ability to conduct behavioral surveillance on us.

And there’s no doubt Google would use this data to increase its already extensive dossier on us. It would be a major trade-off of privacy for convenience.

Checking back in on the three missions to Mars…

Back in July of last year, we talked about the three missions to Mars that launched at about the same time.

NASA launched its Perseverance mission to put both an SUV-sized rover and a drone on the surface of Mars. China sent an orbiter and rover of its own. And the United Arab Emirates (UAE) launched a satellite to orbit the Red Planet.

Well, I’m excited to say that all three missions have made it into orbit. The last mission of the three from China successfully landed its rover on the surface of Mars after a few months of orbiting the planet while figuring out where to land.

What’s interesting to me here are the different approaches taken by NASA and China.

NASA executed its landing mission immediately, putting the rover and the drone right to work collecting data. The landing location had already been predetermined.

On the other hand, China’s mission orbited Mars for a while before picking a landing location for its rover named Zhurong. Here’s what it looks like: 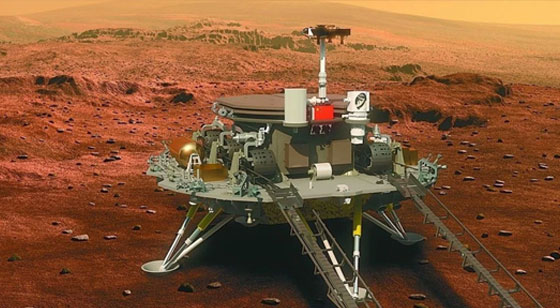 Zhurong is stripped down compared to Perseverance. It doesn’t have as many instruments, and they’re not as powerful. With one exception…

Zhurong has a very powerful ground-penetrating radar instrument. It’s an order of magnitude more powerful than what Perseverance has. This gives it the ability to see structures underground up to 100 meters deep. This is a key element of what China is focusing on.

To me, it’s clear that China’s primary goal is to search for underground reserves of water or ice. And there’s only one reason why this would be the focus – China wants to have a manned outpost on Mars. That’s only realistic if a large water source can be identified.

So it appears Elon Musk has some competition with his Mars ambitions. This is certainly something to watch in the coming months.

And this is just more evidence that the new space race is on. This race has major implications for the future of human civilization.

And it will provide us with some incredible investment opportunities along the way.

P.S. Speaking of incredible investment opportunities, we have a fantastic setup staring us in the face right now.

Thanks to recent government action, a unique and little-understood asset class has been beaten down and left for dead. And the media is working furiously to scare investors away with overtly negative headlines. They are telling people that it is “game over.”

Except they are wrong. We’re looking at a classic market overreaction – the kind that leads to big investment gains.

I want my readers to capitalize on this temporary distortion. That’s why I’m hosting an Emergency Briefing next Wednesday, May 26, at 8 p.m. ET.

I will explain in detail the situation that’s unfolding before us right now, why the mainstream is wrong about it, and what we need to do as tech-savvy investors to profit handsomely on this opportunity.

For those interested, please block off next Wednesday evening to tune in. The briefing will start at 8 p.m. ET sharp. Just go right here to reserve your spot.