I’m excited to share with readers new data and information that sheds a light on what is happening with regard to the pandemic. I’m more encouraged than ever by what I have been seeing.

Today, we’re going to have a look at the trend of deaths as a percent of those who have been hospitalized and considered a COVID-19 patient. This is effectively a COVID-19 hospitalization mortality rate. 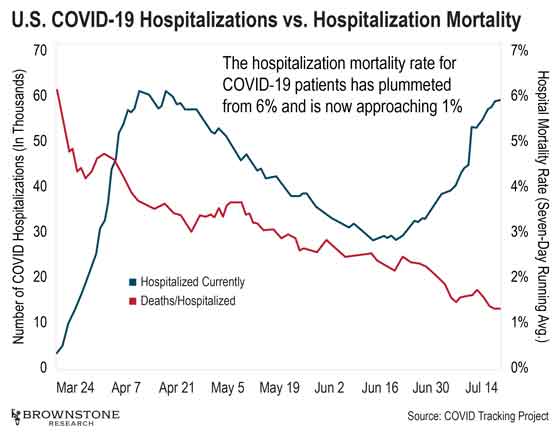 As we can see, overall COVID-19 hospitalizations are nearing the peak that we saw a few months ago in April. This is what we see broadcast by the mainstream media. But what the media leave out is the mortality rate. Let’s look at the trend. It’s remarkable.

The hospitalization mortality rate for COVID-19 patients has plummeted from 6% and is now approaching 1%. That might still sound like a lot, but we should remember that only the very worst cases of COVID-19 result in hospitalization.

And that rate is going lower. Within a few weeks, it will be below 1%. So what’s going on?

There are a few reasons. The medical community has dramatically improved its ability to treat patients with COVID-19. Not only do we now have drugs that are effective at helping treat more severe cases of COVID-19, but we also have several vaccine candidates that are being used in clinical trials across the country.

It may also be that the hospitalizations we are now seeing are milder than those that we saw back in April.

After all, we are better now at isolating and protecting the small part of the population that is genuinely at risk. And most medical facilities are now testing any patient that visits the hospital – regardless of the reason – for COVID-19.

For example, if a patient gets admitted for a broken wrist, he or she is tested for COVID-19. If that person tests positive, even without any symptoms, he or she is now considered a COVID-19 patient.

This is all very positive news in spite of the increase in new cases and overall hospitalizations.

Yesterday, we talked about a new CRISPR development from UC Berkeley’s Jennifer Doudna. Today we’re going to take a look at an even bigger development.

It is arguably even more important. It holds the key to unlocking CRISPR’s final frontier…

By researching bacterial toxins, scientists at the Broad Institute of MIT and Harvard just discovered a CRISPR enzyme that can enter mitochondria. This is a first.

All prior enzymes, including Doudna’s latest discovery, are too large to get into mitochondria. That’s made it impossible to pursue therapies to address diseases and conditions caused by faulty mitochondria.

Why is this important?

Mitochondria are the cells’ powerplant. They are inside of our every cell, and their job is to turn oxygen and nutrients into energy. And each cell is wholly dependent on the mitochondria. If they aren’t functioning properly, the cell dies. That’s when mitochondrial diseases occur.

And mitochondrial diseases can be severe. In extreme cases, damaged mitochondria can lead to heart failure, dementia, or seizures.

Up to this point, scientists have not had a tool to address mitochondrial diseases. That’s been the last frontier in genetic editing. And that’s why this breakthrough is so exciting.

The team at the Broad Institute has filed patents on what it calls a mitochondrial base editor. I’m excited to see what happens next. Will it license the tech to an existing biotechnology company? Or will it spin out a new company to focus solely on mitochondrial diseases?

Either way, we can expect this technology to develop rapidly. And it will likely lead to an incredible investment target in the near future.

The next Mars rover is tasked with a unique mission…

Last month, we talked about how NASA’s Curiosity rover has been mapping the surface of Mars for about eight years now. But Curiosity wasn’t the first mission to Mars.

NASA has been exploring the Red Planet since the 1960s, and it has sent various probes to Mars in that time. Each probe had a similar mission – analyze the planet’s atmosphere, surface, and environment.

Well, weather permitting, NASA is sending a new rover to Mars next week. This one is called Perseverance. And its mission is different. Perseverance is tasked with finding life. 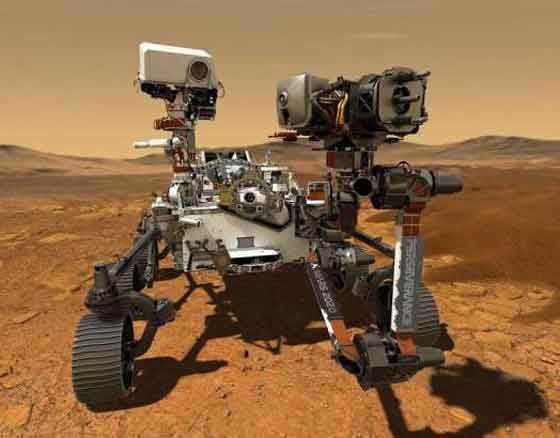 The rover will land in what is known as the Jezero Crater. This is a multibillion-year-old river delta. At one point, it was full of water. So there’s a good chance that water still exists under the surface of Mars.

The rover is equipped with sensors that can detect water or ice up to depths of 10 meters – about 33 feet – beneath the surface of Mars. These sensors can also detect life in the soil.

What’s more, the rover will carry an autonomous drone with it. The drone will be set loose to explore Mars from the air – something never before possible. In fact, this will be the first attempt at aerial flight on another planet.

That’s because the atmosphere on Mars is a fraction as thick as Earth’s. That makes it hard to fly because the aircraft can’t achieve the same lift as it can on Earth.

To solve that problem, this drone is going to be very light – just under two kilograms (four pounds). And its helicopter-like rotors will spin incredibly fast, enabling it to cover a distance of up to 300 meters per flight. 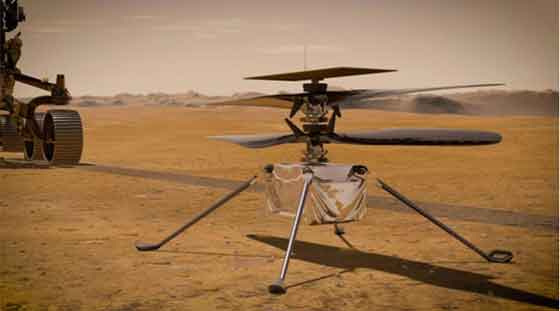 Perseverance is a great step in that direction. We stand to learn more about Mars than we ever have before.

Big news – the data is out on total venture capital (VC) funding for the first half of 2020.

As regular readers know, I am deeply plugged into what’s happening in Silicon Valley.

I am an active angel investor myself, and my research into private technology and biotechnology companies plays a big part in my investment research. It is invaluable information that helps me have an accurate window on the future.

That’s one of the places where I get my edge.

I follow the top early stage tech companies through each round of VC funding while they are still private. That way when they go public or get acquired, I already know if they will be a good investment target or not.

Considering the pandemic, we might expect VC funding to be horrendous for the first half of this year. If so, we’d be wrong. 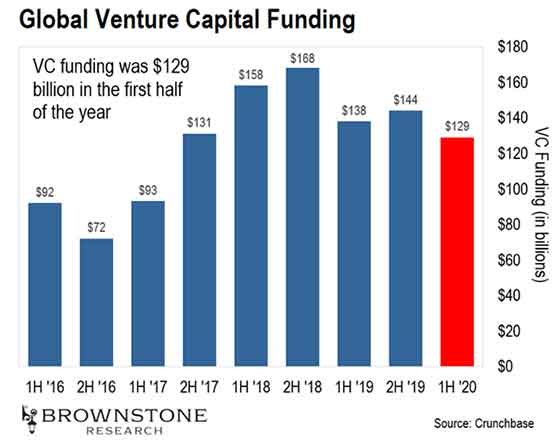 Looking ahead to 2021, I expect a much better climate for venture capital as we get past the COVID-19 pandemic and the 2020 election cycle.

We may be wondering: Why does venture capital matter to retail investors?

What few understand is that venture capital is the fuel that drives innovation. It helps create the next generation of technology and biotechnology companies that shape the world around us.

Virtually every great technology investment my subscribers have profited from was in part possible because venture capital helped these companies “get off the ground.”

That’s why I always review the data on VC funding when it comes out. As long as we continue to see these elevated levels of venture capital funding, we know the innovation engine will continue and a lot of tech companies will be lining up to go public.

It’s easy for us to get distracted or even depressed by all of the negative press, but these numbers tell a very different story.