My longtime colleague and friend Jeff Clark is hosting a very special event coming up on May 11. For those who don’t know, Jeff is an expert options trader with a 35-year career and a compelling track record…

And now he’s sharing his best way to profit in these choppy markets. He says it could double our money in as little as 44 days, so it’s certainly worth paying attention to.

To tell you about it, I recorded a short video. I’d highly encourage all my readers to check it out. 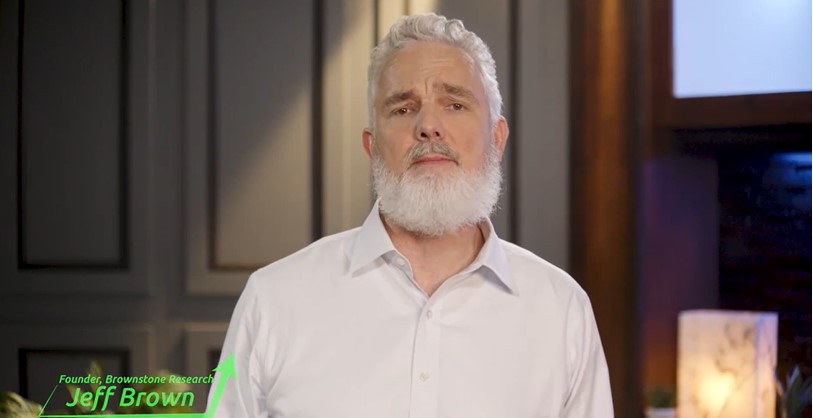 “Am I missing something?”

I am enthusiastic about AR. But a major question I have not seen addressed is how companies utilizing this eyeglass technology will account for the high percentage of people who must wear eyeglasses at all times to see with their normal vision.

Simply having an AR field superimposed on fuzzy natural vision will not be satisfying to most folks, and the alternative would seem to be carrying one’s regular glasses and constantly switching between them. Am I missing something?

Hi, Brent, and thanks for the question. And no, you’re not missing anything. This is a very relevant question.

AR technology is moving swiftly, and we’re going to see at least a few new kinds of AR eyewear announced before the end of this year.

For those who missed it, I’ve previously written about the development of AR glasses by industry leaders like Niantic, Facebook, and Apple. AR glasses will be able to overlay video, images, and data on top of the user’s actual surroundings.

Regular readers know that I believe AR glasses will be the next mass-market consumer product. And I even think they will eventually replace our smartphones. I can’t wait to see the finished product from Apple in particular.

Yet what about people who already wear glasses? Will we need to switch between our prescription lenses and AR glasses multiple times a day?

After all, around half the world’s population uses some form of vision correction, and approximately 164 million Americans wear glasses already.

The simple answer is that many AR glasses will be able to incorporate prescriptions into their lenses.

Apple has already said it would offer prescription lenses for an additional fee. And it’s not alone. Focals, a pair of AR glasses by North, already has prescription options as well.

The industry realizes this will be needed for mass adoption.

So rather than switching between multiple pairs of glasses depending on our task, we’ll be able to use our AR glasses throughout the day.

We have been tracking the progress of augmented reality (AR) company Mojo Vision for about a year now. This is a company focused on something right out of science fiction – AR-enabled contact lenses.

And Mojo Vision recently released a new prototype that gets us one step closer to these contacts becoming a reality. 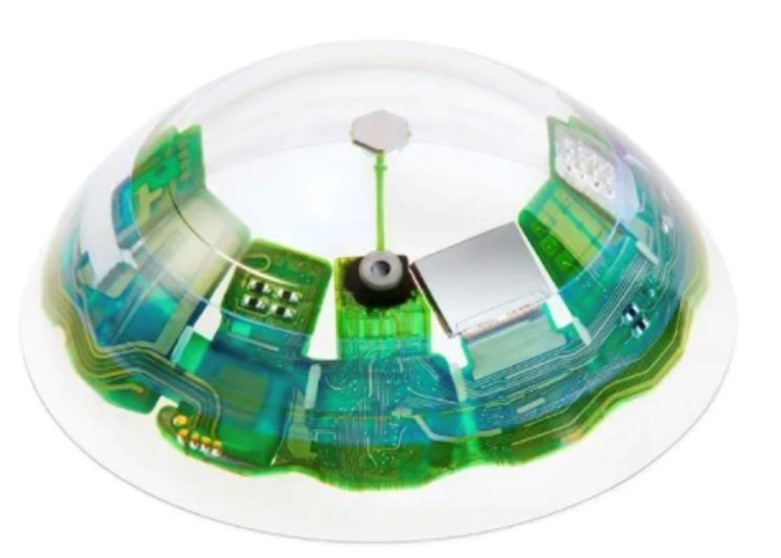 An ARM-based processor powers the lens. Its processors are extremely small and power-efficient, making them perfect for this application.

And, of course, the lens comes equipped with wireless connectivity. A small wireless radio communicates around the 5 Gigahertz (GHz) range designed for shorter-distance transmissions.

The clear benefit of Mojo Vision’s lenses is that they will be the least intrusive way to have augmented vision. We can either wear our prescription glasses over the top of the contacts – or simply add our prescription requirements to Mojo’s lenses.

The ease of not having to wear glasses, or alternate with a separate pair, will make this another attractive option. We are still a few years away from a commercial launch of AR contacts like these, but we have a lot to look forward to.

And, as always, I’ll be helping my readers profit as this technology takes hold. To learn about one of the top companies that will benefit from the AR trend, please go right here for the details.

Next, a reader wants to know more about smaller fusion reactors…

Jeff, I attempt to monitor the development of fusion reactors and their improving performance in approaching net energy gain beyond maintenance of the fusion reaction itself.

I noticed that recently a British research group has attained a new high point in time of duration of the fusion reaction using a small modified tokamak, an Australian group has made progress by tightly controlling particle collision/fusion, and TAE in California has been seeing progressively improved efficiencies using their laser constrained plasma targets.

It would appear that nuclear fusion is approaching a net energy output status on several fronts using several different approaches.

Can you comment on the progress being made to generate electrical energy via fusion and the likelihood that these physically smaller fusion reactors are approaching clean and commercial availability? Thank you.

Hello, William, and thanks for writing in. It sounds like you’re up to speed on these exciting developments.

The latest breakthrough in the U.K. was quite notable. And your sense that these developments are indicating that we’re getting close is spot on from my perspective.

As I discussed in last week’s mailbag, nuclear fusion technology is advancing at a rapid pace. This is great to see, as nuclear fusion will grant us clean, limitless, affordable energy.

Nuclear fusion involves taking two separate nuclei and combining them to form a new nucleus. This can produce an enormous amount of energy – without radioactive waste.

And as mentioned, several companies are tackling unique approaches to this tech, including making compact reactors.

Helion Energy, for example, is building nuclear reactors that can fit inside a shipping container. Each one could be loaded up on a semi and delivered to any location.

And at its destination, the reactor could simply be plugged into the local power grid to access the initial energy required to get the reaction started. After that, it would be supplying the grid with nothing but limitless clean energy.

Even better, Helion believes that it can demonstrate a reactor capable of industrial-scale power by 2024. Back in 2019, I predicted that this would happen by 2024, well before Helion had made its own projection on timing.

Another company, General Fusion, is also working on a different kind of compact reactor, but the concept is the same. It can fit in a small warehoused facility and supply as many as 100,000 homes.

We could build a decentralized network of these fusion reactors to create a more resilient power grid. And we could deploy this tech more economically at scale.

General Fusion expects its reactor to be fully functional by 2025. Once again, this isn’t a decade out… It’s nearly here.

So we are no more than a few years away from the first fusion reactors producing more energy than that required to power them.

Rest assured, I’ll continue to research and write about exciting developments in The Bleeding Edge. And I’ll be sure to let my readers know as promising investment opportunities appear on my radar.

My thoughts on Boxabl…

Hi Jeff, I got an invitation from Republic to invest in Boxabl. A minimum of $1,000. I did. Not sure if it’s something you would suggest to your subscribers.

Hi, Tom, and thanks for writing in. Boxabl is certainly a company to watch.

I first covered Boxabl back in September when it hit $1 billion in preorders for its product.

We can see it here:

Boxabl makes 375-square-foot “unfolding” houses. Each one contains a kitchen, a bathroom, a shower, a living area, and a full bed.

Even better, the house doesn’t need any special delivery equipment. It can fit on a normal flatbed trailer pulled by any vehicle. And given the small size, it can be delivered to almost any site.

Once there, the house can be assembled in a single day. That’s hard to beat.

This is a great step forward to solve our affordable housing problem. Each house costs roughly $50,000, making it a cost-effective option for many people.

This will appeal to low-income areas plagued by a lack of affordable housing options… and we could also use them for temporary housing for industrial sites.

Given the high demand for housing around the country right now, this company could be a big success in the future.

So would I recommend investing in it through Republic?

First, let me say that I cannot give personalized investment advice. So this is simply general commentary for those who’re considering this offering.

Boxabl is currently raising money through a Reg A/A+ deal, as it is a private company. It aims to raise somewhere between $3 million and $68.5 million through this offering, at a $3 billion valuation.

And it’s that last number that raises a few red flags in my mind.

Part of the real power of private investing is being able to get into companies at low valuations. For example, if we invest in a company at a $100 million valuation and it rises to a $1 billion valuation, we’ve just 10X’d our money.

That’s a pretty reasonable thing for a rapidly growing, early stage company to do, too. We’ve reported on a number of promising companies that have recently become unicorns in these pages.

But Boxabl is raising capital at a $3 billion valuation. That doesn’t mean that it’s worth $3 billion. That is what it is asking investors to invest at… This is a critically important distinction.

If a startup with limited revenue raises at a super high valuation – like $3 billion – it simply means that it has to sell less of its company to investors in exchange for the capital raised.

In this case, to achieve a 10X gain on our money at this proposed valuation, the company’s valuation would have to grow from $3 billion to $30 billion.

That’s a far bigger challenge for a new company. Toll Brothers, an established house builder, only has an $8 billion enterprise value (EV). Lennar, the largest public homebuilder in the U.S., has a $26.9 billion EV.

The reality is that investing in any private company at an egregiously high valuation – that does not actually reflect a fair valuation of the business – is a terrible investment. It’s like stacking the deck against ourselves.

It could take five or 10 years just to grow into a $3 billion valuation – at that point, any investors today would simply break even.

I don’t like it when founders set these absurd valuations. Venture capital (VC) firms would never allocate capital if founders try to ask for unreasonable valuations.

And I really don’t like it when startups try to “sell” their deals through crowdfunding regulations to retail investors that don’t understand valuation models. In my book, that’s a bad practice.

So while I’m very impressed by the product that Boxabl is building, I’d be much more interested in this deal if it were raising capital at a far lower, more appropriate valuation for where the business will be in 2022.

Thank you for asking this question. It is a good example of one of the key things to look for and understand when considering private investments.

Have a great weekend.