Over the past week, I’ve been sharing with readers about America’s last digital leap. As I’ve said, a digital leap happens when an entire industry goes from analog to digital.

In the past, these leaps have led to massive changes that affect our daily lives in a number of ways. We’ve seen services like Carvana upsetting the traditional car sales process, making it possible to buy or sell your car with the click of a button.

Or there’s been Uber and Lyft, which have turned the traditional taxi industry on its head. Airbnb has had a similar effect on the hospitality industry.

Amazon changed the retail industry… Netflix revolutionized the video rental industry with the arrival of streaming… In fact, so many industries have had digital leaps over the past couple of decades that almost every area of life has been impacted.

Except there’s one industry that’s lagged behind.

But now, thanks to the pandemic, it’s finally going digital. Like I’ve said, I believe this could be the last digital leap we see.

And that’s why I want investors to be prepared. Because in all of the digital leaps that have happened before, there have been extraordinary opportunities to profit. And this last digital leap will be no different… for those who get in position now.

There’s no time to waste. If you haven’t yet watched my America’s Last Digital Leap presentation, I encourage you to go right here for all the details… including my top pick for how to profit from this digital leap.

A surprising entrant into the augmented reality race…

There has been an unexpected development in the race to develop the first mass-market augmented reality (AR) headset. The field just became more interesting.

As a reminder, AR is a technology that overlays video, images, and data on top of the user’s actual surroundings. It overlays computer graphics on top of our real world. This can be done in a pair of glasses, windows, or smartphones and tablets

And Niantic – the company that produced the wildly successful Pokémon Go game – just hinted that it is developing its own AR glasses.

This came as a surprise to the industry. After all, Niantic is a software company known for making AR games. It has not ventured into hardware up to this point.

Here’s a look at the image that Niantic teased: 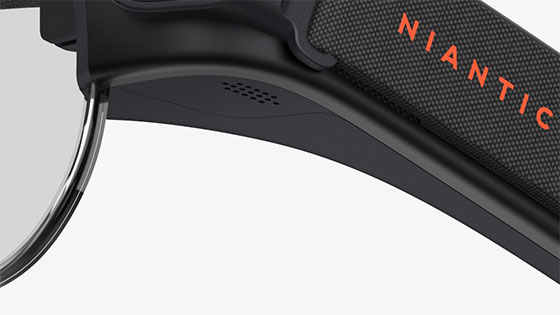 These look like a sleek pair of glasses. They will likely have great form factor. That’s important.

As we have discussed before, consumers don’t want to walk around wearing bulky goggles. To crack the code and gain mass adoption, companies need to produce AR glasses that look and feel like normal glasses.

So Niantic is on the right track. And though this surprised the industry, Niantic’s entry into AR hardware actually has great potential.

Think about this – the Pokémon Go app has been downloaded over one billion times since its release in 2016. And it has generated nearly $2 billion in revenue for Niantic in that time.

I was in Tokyo when Pokémon Go launched, and I remember how crazy people were about it. Central Park in New York was also mobbed.

In Tokyo, I saw people driving around while holding their smartphones up. They were looking for Pokémon instead of focusing on the road. And it seemed like every other person on the street was looking down at their smartphone trying to find the digital characters.

So many people were completely immersed in the game. It was fairly dangerous in that sense.

It’s easy to see how AR glasses would improve this experience tremendously. Rather than holding up a smartphone, players would be able to see Pokémon right in their field of vision as they went about their day. That would make the game more enjoyable for players and much safer for everybody.

What’s more, Niantic has since released a Harry Potter-themed AR game called Wizards Unite. And it is already testing an early release of a new AR game called Pikmin in Singapore, which is a collectibles game similar to Pokémon.

The “stickiness” of these games gives Niantic a major advantage when it comes to AR glasses. Because the games are so good, consumers would rush out to buy Niantic’s eyewear just to play them.

And here’s where it gets even more interesting…

Based on the work that I’ve seen from Niantic since 2019, the company will likely incorporate 5G wireless technology into its glasses. That could take these games to a whole new level by providing a more seamless, immersive experience.

Niantic may be on to something big here. And who knows, it may decide to access the public markets on the back of an exciting new product announcement. It’s just a matter of time.

The regulators are gunning for blockchain transactions…

The “discussion” between the blockchain industry and regulators continues to heat up. This time, we’re seeing new regulations proposed by the Financial Crimes Enforcement Network (FinCEN).

As a reminder, FinCEN is a division of the U.S. Treasury. We talked in January about how it tried to sneak in draconian new regulations targeting digital asset wallets just before Christmas. Very little time was provided for the industry to review these regulations.

FinCEN is still pushing for new regulations that would require companies providing digital asset wallets to maintain detailed financial records on the holders of any wallet with a transaction value greater than $3,000. This includes documenting what entity the funds in the wallet originally came from and where the funds were sent.

Think about what this means…

If we went out and bought a Tesla with bitcoin, the company managing our digital wallet would be required to collect all of our personal information and report it back to FinCEN as if this were a suspect transaction. But it doesn’t stop there.

Remember, the blockchain is a transparent public ledger. It documents every transaction that’s ever happened. The key is that it doesn’t include personal information with these transactions.

Well, once FinCEN has personal information pertaining to an individual wallet for a larger transaction (such as our Tesla purchase), it would be able to “see” every other transaction we’ve ever made with the same wallet.

The industry is extremely concerned. And aside from the operational expense to comply with these kinds of draconian regulations, it is a gross violation of privacy.

To illustrate why this is a big deal, think about the implications.

To draw an equivalent example, imagine if all of our U.S. dollar purchases were required to be registered to our name.

We would no longer be able to simply pay in cash for any item. We would be required to show identification. And that identification would be scanned to connect the transaction to our “account,” which would be reviewed and analyzed by the government. Does that feel right?

This is essentially what the regulations are proposing. And the implementation of a Federal Reserve-backed U.S. digital dollar would take things one step further. By definition, every transaction would be tracked and taxed.

If this small modicum of privacy is taken away, even our most sensitive purchases will become visible. And that would expose us to certain risks.

For example, imagine that we have a sensitive or embarrassing health condition that requires medication. When we buy our medicine, it will immediately be known that we have this issue. And that could potentially lead to increased insurance costs or even dropped coverage.

It’s wrong to force law-abiding, taxpaying citizens to register all their transactions with the government. Many think this is even a violation of the Fourth Amendment, which says that the government must get a warrant before conducting a search.

Fortunately, the industry is standing up in unison against these proposed regulations. Companies like Coinbase and Square have been vocally opposed. And the Electronic Frontier Foundation has called this a gross violation of privacy.

Rest assured – this is something we are also working against at the Chamber of Digital Commerce, of which I am a member. The Chamber has been very engaged. It is pushing for a healthy regulatory framework that will allow innovation in the blockchain industry to thrive in the United States.

Still, this is something we all need to be aware of. If we surrender our right to privacy, we likely won’t get it back.

Along the same lines, we’ll wrap up today with hard data that lifts the curtain on Google’s data surveillance activities with regards to mobile phones. If you use an Android-based smartphone, I encourage you to read this.

Both Apple- and Google-based smartphones “report” information back to their respective carriers. This isn’t new. There are certain data points related to telemetry and location that are important for the software and applications to function properly.

But the full extent of the information being “collected” was uncertain.

Here’s how it works. The iPhone and Android phones “check in” with Apple and Google every four and a half minutes. That’s how often the phones send data back to their respective corporate headquarters. And this happens all day, every day – even when we are sleeping and our phones are idle.

Over a 12-hour period, the iPhone sends about 52 kilobytes (KB) worth of data back to Apple. This includes telemetry (instrument data readings) and location data. 52 KB isn’t much at all – just a sliver of information.

But Android phones send about 1 megabyte (MB) worth of data back to Google over the same time period.

For comparison, 1 MB is equal to 1,000 KB. That means that Google collects about 20 times more data from its smartphones than Apple does every 12 hours.

What’s more, Google actively seeks to monetize this data. It packages it up and sells access to the highest bidder. That’s something Apple has never done; it is simply not part of Apple’s business model.

And think about the big picture here.

As I write, Google’s Android operating system holds about 84% of smartphone market share globally. That means Google is collecting massive amounts of data from the vast majority of the world’s population every single day.

It pulls information from the Chrome browser, YouTube, Google Docs, Google Messenger, the search bar, and other applications.

Of course, Google tried to deny this research report. But it couldn’t provide any specifics in its argument. The authors of this research at Trinity College called Google’s response “positively misleading.”

So what we have here is cold, hard proof – Google’s Android operating system is terribly invasive.

I’ve said this before, and I’m sure I’ll say it again… Readers who are concerned about privacy should choose the iPhone.

P.S. For those who missed it, there’s still time to watch the replay of my presentation on America’s Last Digital Leap. This will likely be the last major “digital leap” of our lifetimes, and that brings with it a massive investment opportunity.

To find out what I see coming, and my top recommendation for how to play it, you can catch the replay right here.