The purpose of my trip was to meet with individual offices of the House and Senate. I wanted to talk about the merits of blockchain technology and the policy initiatives of the Chamber of Digital Commerce. I hopefully removed some of the common areas of fear, uncertainty, and doubt on Capitol Hill.

Ultimately, we want a light regulatory touch on the industry and clarity on regulations concerning digital assets, token offerings, and taxation.

Overregulation won’t stop innovation with blockchain technology… It will just push it offshore. We would like to encourage innovation and leadership here in the U.S.

I think we made some progress last week… But we still have a ways to go. It’s still early days for blockchain. Advocacy efforts like this are hard work. They require playing the long game and take years of effort.

The industry – and consumers – is lucky to have a group like the Chamber of Digital Commerce. The Chamber works in D.C. day in and day out, advocating for a fair and reasonable environment that will allow the blockchain industry to flourish.

And those efforts will impact literally all consumers… After all, cryptocurrencies are money, and eventually, we’ll all be transacting with digital assets.

And I have to tell you, I think D.C. is the only place where people talk faster than they do in New York.

On Capitol Hill, you have short time slots to get your points across… So people talk fast to get everything in. There’s definitely no sitting down over coffee to have a lengthy discussion in Washington.

And like the numerous conferences I attend, this event in D.C. was invite-only. You won’t find these details on Bloomberg or in The Wall Street Journal. I share them exclusively with you, a reader of The Bleeding Edge.

My morning session in the Capitol Hill auditorium…

Our Congressional Blockchain Education Day started in the Congressional Auditorium. The auditorium sits beneath Capitol Hill. It is a highly secured meeting space often used for national security briefings. 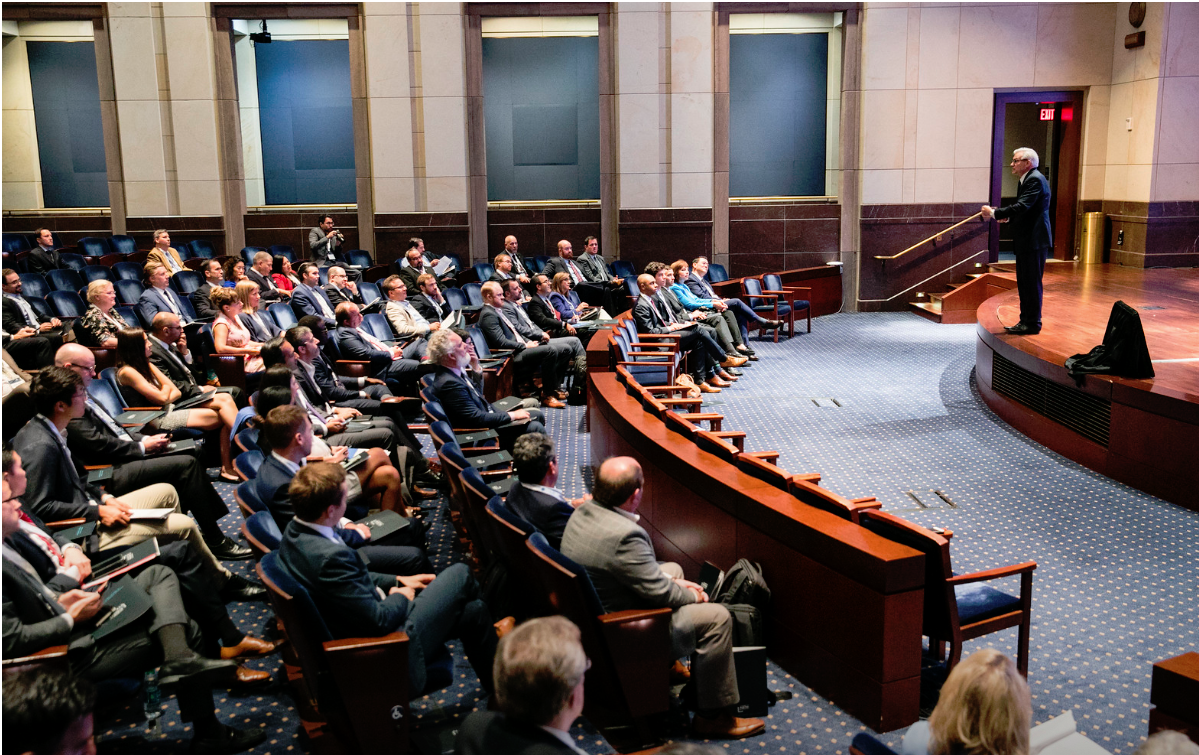 We heard from three of the four cochairs of the Congressional Blockchain Caucus. These are strong advocates for blockchain technology. And they focused on how it can be used to solve real-world problems… and drive efficiencies through outdated legacy processes.

Rep. Bill Foster (D-IL) demonstrated the most in-depth understanding of blockchain. Foster is a physicist, and therefore an outlier as a congressman. He claims to be the most technical person on Capitol Hill. He’s certainly an asset for our cause.

We also heard from Rep. David Schweikert (R-AZ) and Rep. Darren Soto (D-FL). Schweikert started his career in tech. And Soto happens to be one of the youngest members of Congress. He’s certainly from the digital-first generation. Both of these gentlemen have been great for our advocacy.

These three cochairs basically briefed us before our meetings with the offices of the House and Senate. They told us that they’ve seen a rising level of awareness of cryptocurrency and blockchain technology.

But at the same time, there is still a large gap in understanding. Some elected officials are coming around… But others just don’t get it.

With that, we adjourned, and I made my way to the tunnels that connect Capitol Hill to the Senate and House buildings. It was quite a unique experience.

The tunnels are like a miniature subway system underground. There are cars shuttling policy makers about. And you see well-known politicians walking through the tunnels left and right.

And, of course, they are highly secure. You need a special ID to travel freely. And you must walk through security scanners, just like you do at the airport.

After navigating the tunnels, I emerged inside of the House and Senate buildings, where my individual meetings were scheduled.

Meeting with the offices of the House and Senate…

My first meeting was with the office of a senator on the Financial Services Committee. Concerned with monetary policy, that office was quite aware of cryptocurrency and blockchain technology.

The office was also interested in the Facebook hearings… especially as they pertain to the digital currency Libra.

Libra is a potential threat. It’s a global reserve currency controlled by a “cabal” (my word) of corporations friendly with Facebook. It’s easy to understand why Washington is tracking Libra and Facebook with such interest.

In that meeting, my task was to separate Libra from the industry. And my emphasis was on blockchain applications unrelated to money. I talked about how digital wallets could deliver financial services… And I homed in on identity.

I explained that digital wallets could be used to verify identity… and how we can eliminate identity fraud by putting our identities on the blockchain.

Everybody knows identity theft is a huge problem right now. And frankly, it’s easy to forge ID documents. But blockchain can solve those problems instantly.

The members of the committee that I spoke to had never considered this possibility. I’m optimistic that it better informed their view on this technology.

My second meeting was with a congressional office that was not terribly interested in blockchain. The members had only a basic understanding. It just wasn’t considered a priority, so awareness levels were very low.

That’s understandable. After all, the U.S. dollar works pretty well, and it is easy to imagine that there are bigger, short-term issues to prioritize for most members of Congress.

My goal was to educate them that blockchain is about much more than just cryptocurrency. By demonstrating some of the applications of blockchain, my hope was to demonstrate the technology’s usefulness to their constituents.

So to that office, I talked about smart contracts. I explained that smart contracts are digital contracts that automatically execute whenever certain conditions are met. Then I gave them an easy example.

Buying a home today is a tedious process. It takes months to close and costs thousands of dollars in fees. That’s because you have several third parties involved to deal with things like escrow, title insurance, and title transfer.

Well, smart contracts can automate those processes and get rid of the third parties. That would speed up the process and drive down those fees.

One day, smart contracts will enable us to buy a home in 24 hours… and pay at least 80% less in transaction fees.

Specifically, I wanted to demonstrate why a state-by-state regulatory framework for smart contracts would be counterproductive and unnecessary.

One of the Chamber of Digital Commerce’s important initiatives has been to push back against new state-led legislation for smart contracts.

In fact, subscribers of The Near Future Report and Exponential Tech Investor already made very meaningful contributions to this initiative by signing an electronic petition led by the Chamber. Thank you again to those who participated and supported this effort.

In my third meeting, the congressperson’s office was not interested in blockchain at all. The opioid crisis was its top priority. It didn’t think blockchain was very relevant.

I talked to that office about how blockchain can aid supply chain management in the pharmaceutical industry. With blockchain, you could track opioids from manufacturing… to containerization… to the distribution center… to the pharmacy… and ultimately to the patient with a doctor’s prescription.

This kind of tracking from the point of manufacture to a patient can ensure that the supply chain is secure. It also allows any permissioned parties to have access to one single source of truth.

And this happens through blockchain technology. Pharmaceutical companies can then demonstrate compliance with a regulated substance like opioid-based painkillers.

That’s only possible with blockchain. I pointed that out, and I believe it sparked some interest.

After my meetings were complete, I made my way back to the tunnels… and the auditorium.

A nice reception in the Congressional Auditorium ended the day. That gave us a chance to talk about our progress… as well as our next big initiative. 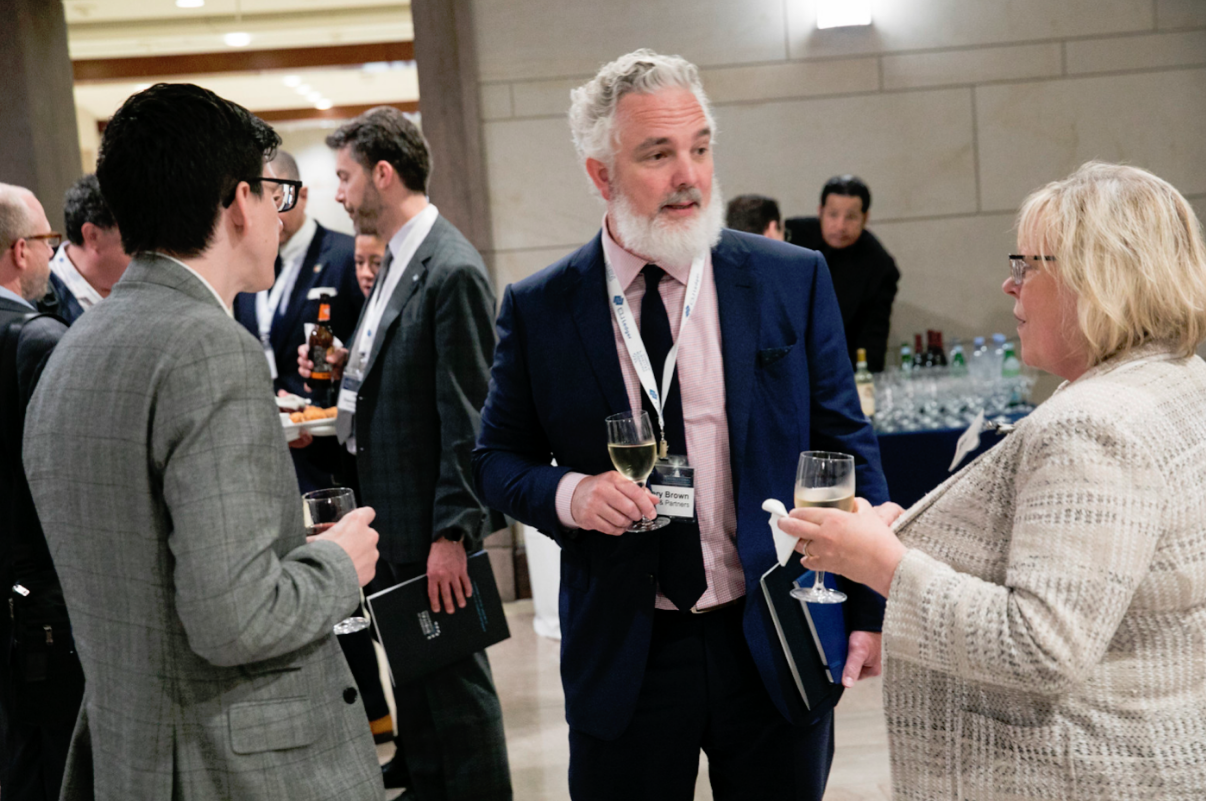 Jeff during the reception in the Congressional Auditorium

And the fourth cochair of the Congressional Blockchain Caucus, Tom Emmer (R-MN), met us at the reception.

Emmer is a real champion for using blockchain to disrupt incumbent bureaucracies and modernize the way we do things. I had the pleasure of spending some time with the congressman in D.C. earlier this year.

He talked about how we should register our IDs on the blockchain and attach everything to them. Driver’s license… passport… voter registration… hunting and fishing license… They all could be attached to a digital ID on the blockchain. It’s silly we are still issuing pieces of paper for these things.

What’s more, you could link registration for various government services to the digital ID. Think Social Security… Medicare… Medicaid… whatever the program happened to be.

In this way, we could eliminate all the fraud and corruption that encircles government services today.

So Emmer is a practical policy maker who sees the real value of blockchain. His work on the caucus has been invaluable to our cause.

P.S. And one last thing…

Last night, I hosted the Accelerated Profits Summit. It was a great event, and I’m grateful to all the readers who attended.

During the event, I revealed a proprietary trading system that can deliver venture capital-like returns to everyday investors. I’m so thrilled that my readers have a chance to take advantage of the type of investment opportunities that are usually reserved for Silicon Valley venture capitalists.

If you missed the event, don’t worry. You can watch the replay here.