The most advanced chipsets on the planet…

I was very impressed with Jeff’s presentation and The Near Future Report! I have been retired from several highly technical fields as an engineer but am not familiar with the term nanometer (nm), or 10 to the minus 9 meter. I have used the term 10 to the minus 9 Torr to define a vacuum in inches of mercury. What does… 5 nanometer (nm) manufacturing process actually mean? Are we talking about the size or speed of something?

Thanks for writing in, Floyd. It’s a great question that’s often overlooked by investors. But understanding these details informs better investment decisions. And it’s what gives us an edge over most investors.

One nanometer (nm) is one billionth of a meter. This unit is often used in atomic measurements. The diameter of a helium atom, for instance, is about 0.06 nm. It’s incredibly small. But this unit is also important for semiconductors.

Chipsets are composed of tiny transistors. Think of these like electrical switches that go on and off to perform calculations. And the distance between each transistor on a semiconductor is measured now in nanometers.

In industry terms, we refer to these as “production nodes.” The most advanced production is happening right now at a 7 nm node, and very few players are able to have access to these advanced semiconductors. Apple is one of them.

So when I wrote that Apple was planning to use 5 nm chipsets in its 5G-enabled iPhones, I referred to the next-generation semiconductor manufacturing process that comes after the 7 nm semiconductors that we are seeing this year.

As these production nodes get smaller and smaller, the power requirement for the semiconductor shrinks and the performance improves. For perspective, the 5 nm chipsets produced by semiconductor manufacturing company Taiwan Semiconductor will deliver a 20% reduction in required power and a 15% performance improvement over the 7 nm chips. They will also be 45% smaller than the 7 nm chips. That’s huge. This is why there is always an incessant race to migrate to smaller and smaller production nodes.

In a world where artificial intelligence and machine learning technologies are running at the edge of the network in mobile devices, sensors, and cars… power usage, performance, and size mean everything. These semiconductors must be small, powerful, and power-efficient.

And consider what will happen when we see commercial deployment of augmented reality (AR) glasses. Remember, these AR devices will eventually look like a normal pair of glasses. That means space is at a premium. The semiconductors have to be as small as possible.

That’s why the move to 5 nm chipsets is such an important step. The semiconductors used in Apple’s upcoming iPhone will be the most advanced on the planet.

The scale of the 5G network infrastructure…

Next up is a great question about the 5G build-out.

How do you bring 5G to rural areas? 4G needs very few towers. Not so for the upgrade. Strikes me as an expensive proposition.

Hi, Joseph. Another great question. And you’re correct. Building out a nationwide 5G network will be a large investment in the nation’s wireless network infrastructure.

5G is a different story. As much as $275 billion will be invested by U.S. wireless carriers to build out these networks. That’s more than five times the amount of the 4G investment.

But the economic impact is well worth the investment. The 5G infrastructure project will create around 3 million jobs and deliver an estimated $500 billion in GDP growth.

And you’re correct that 5G will need many more towers than 4G.

Today, there are about 200,000 cell phone towers scattered across the U.S.

Yet when the 5G network is constructed, there will be more than one million cell phone towers to support the higher speeds and new services delivered over 5G.

Wireless carriers always focus on the densest populations first and then eventually get around to addressing rural coverage with new network build-outs. It’s definitely frustrating for consumers who have to wait for the advanced services. But we can understand why the wireless carriers build out in this fashion. They need to generate revenue quickly from the expensive build-out. That revenue eventually helps fund the build-out in the more rural parts of the country.

Fortunately, President Trump has been very vocal about his desire to bring 5G to rural areas quickly. Here’s what he said during a conference in April:

As we are making great progress with 5G, we’re also focused on rural communities that do not have access to broadband at all.

But I have to say, I’ve been talking about broadband for the – for rural America – the farmers and others. They have really been – they just haven’t been treated properly. And now, what we’re doing is we’re making it a priority.

I suspect the president will keep his promise to bring 5G to rural America. To ensure that happens, I wouldn’t be surprised at all to see the administration offering some economic incentives provided by the U.S. government to the wireless carriers to ensure network coverage even in places that might not make economic sense for the wireless carriers.

This is a fairly standard public/private model around the world in developed countries to ensure that all citizens have the same access to critical services – and certainly wireless telecommunications fall under that category.

One final point. 5G-enabled phones will work on 4G networks. So even consumers who spend most of their time in rural areas can enjoy 5G speeds when they are within network coverage. When they are outside of 5G service areas, the phones will simply “fall back” onto the 4G network.

The intersection of blockchain and politics…

Thank you, Jeff, for addressing my question [last week]. In today’s world, it’s amazing to even be acknowledged, let alone see that you are actually reading, replying to, and including feedback in your letters back. Incredible stuff; it says volumes about the type of business you run.

… I believe you are in Washington, D.C.… and hopefully can get to Trump or someone who has his ear. As you know, Trump fired off a bunch of BS about crypto, Libra, and blockchain in general. As you and I know, there are only two possibilities for this type of response.

I don’t think Donald Trump is corrupt, but I think the people feeding him are corrupt or totally ignorant. Someone needs to get to Donald Trump and let him know the truth. If Mr. Trump were to understand what is at stake and how he could hold the Democrats accountable with blockchain technology and drain the swamp with crypto and blockchain, he would move 5-10% of swing voters his way with a strong government initiative to create its own crypto.…

In other words, what Mr. Trump apparently does not know is that crypto and blockchain are the fulfillment of “drain the swamp.” The biggest swamp is in finance and money, and he is backing the U.S. dollar, the absolute king of corruption with the Federal Reserve. If the U.S. does not get behind the blockchain crypto movement, the U.S. will fall behind and be left behind. Getting behind in today’s world means being checkmated in the digital race to supremacy, and Mr. Trump is too much of a competitor to lose.

Hello again, Steve. I was happy I could get to your question last week. My priority is always to my readers. I can’t always respond to each piece of feedback. But I always review all the feedback and questions.

And you’ve brought another interesting question to our mailbag. As I shared with readers on Thursday, I just returned from my trip to Washington, D.C. I met policymakers there to educate them on the merits of blockchain technology. I didn’t get the chance to meet the president, though. Perhaps next time.

But the president’s comments regarding Libra and Facebook are interesting. Here’s what he had to say: 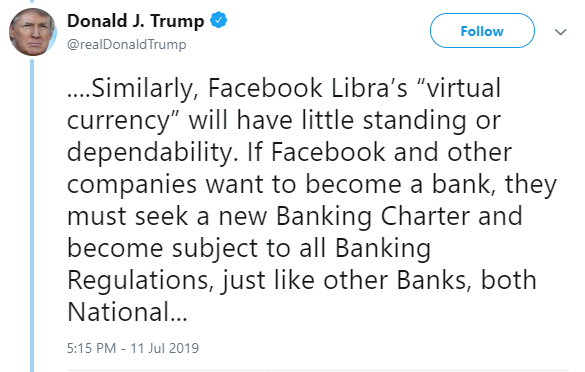 Some of us might take issue with the president’s style at times. But he’s not a stupid man, and he uses social media with purpose. To me, this was a shot across the bow to Facebook. The president is saying to Facebook, “We’re watching. Don’t think you can launch a global reserve currency and act like a central bank.” After all, while Facebook is a fantastic investment, the company itself is not known to be a good actor.

The president’s comments were intentional. It lit a fire underneath the policymakers right before the congressional hearings with Facebook got underway. The timing of the comments was calculated and intentional. And it made everybody aware that the White House is tracking these developments closely.

And I view these comments as a good thing for the industry. This one immediately raised awareness in Washington about cryptocurrencies and blockchain technology. This was pretty low on the list of priorities in D.C., but the increased awareness allowed us to have deeper discussions than we have in the past. It also raised the profile and importance of the Congressional Blockchain Caucus. And fortunately, we have four solid cochairs of the caucus that actually understand how blockchain technology can be used to make government services more efficient… among many other benefits.

And to your point, I do think that the U.S. will eventually get around to its own “e-dollar.” It is inevitable that the U.S. Treasury will migrate away from paper bills into a completely fungible digital representation of the U.S. dollar.

P.S. Before I go, I want to thank the thousands of readers who showed up for my Accelerated Profits Summit on Wednesday. I sincerely appreciate those who took the time to join me for the event.

I pulled back the curtain on the world of early stage tech… And I showed you how to get in on early stage companies alongside the top venture capital firms. I even revealed my system for reaping triple-digit profits with these trades over and over again.

If you missed it, don’t worry. I arranged a special replay. As a reader of The Bleeding Edge, you can watch it right here.