Before we get to today’s insights, I want to make sure all readers are aware of my Pre-IPO Code Event taking place tomorrow night at 8:00 p.m. ET. This event is for readers who have been looking for a way to get shares of companies before they go public – before the truly massive gains come.

As regular readers know, I have been involved in private investments for two decades now. I’m intimately familiar with the space.

But the problem is that world has always been roped off for accredited investors with a lot of money to invest. Normal investors have been locked out.

The research I will unveil tomorrow night solves that problem.

I’m going to show viewers how non-accredited investors can gain access to pre-IPO shares in some of the most exciting private companies on the planet. And that’s without the investment minimums and crippling restrictions that often come with traditional private placements.

What we are talking about here is a “revolution” of sorts for normal investors.

Finally, normal investors can get in on private companies at the ground floor – just like the venture capitalists and private equity sharks. And that means we have the opportunity to really grow our portfolio returns in the coming years.

So please join me for my Pre-IPO Code Event tomorrow night. I want every reader of The Bleeding Edge to be aware of this revolution sweeping the IPO market. We’ll get started at 8:00 p.m. ET sharp.

Yet another private U.S. company is now launching rockets into space…

Over the holidays, a U.S. startup called Astra launched a rocket 390 kilometers (km) into space. This was the company’s Rocket 3.2. 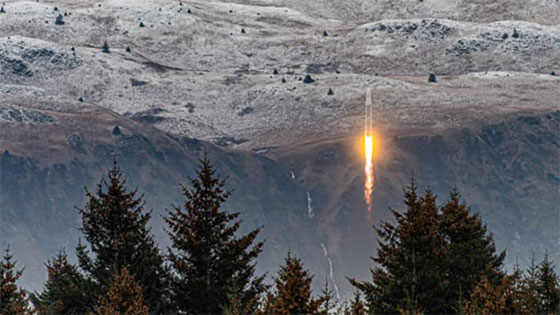 We haven’t talked about Astra before, but I have been watching this company for several years now. It is backed by Salesforce CEO Marc Benioff.

We have talked about Elon Musk’s SpaceX and Jeff Bezos’ Blue Origin in these pages before. Now we can add Benioff to the list of prominent CEOs who have been successful backers and builders of private aerospace companies. Clearly, this is a popular endeavor among billionaires.

Astra’s latest launch just barely failed to reach orbit. It came half a kilometer per second short of orbital velocity.

Still, this was a remarkable feat considering the company was just founded in 2016.

It used to take at least 10 years of development to get a launch into orbit. Given how close Astra’s Rocket 3.2 came, I believe launch 3.3 has a great chance of reaching orbit – with a payload. That launch will likely happen in the coming months.

And what’s exciting about Astra’s approach is how cheap each launch is. The company has reportedly gotten the cost down to $2.5 million per launch. That’s incredible.

At that price, mid-sized companies will finally be able to afford to launch their own satellites into orbit. Talk about a game changer…

For example, think about a mid-sized agriculture firm with tens of thousands of acres under management. It is expensive to monitor such a large swathe of land from the ground.

For $2.5 million plus the cost of a small satellite, that company could afford to utilize Astra’s launch services to put its own satellite up in space specifically to monitor crop production across its entire operation. The company wouldn’t have to share or lease any of the satellite bandwidth with or from other companies. And there are countless mid-sized firms in other industries that could benefit from their own satellites as well.

We are witnessing the demonetization of the process of launching payloads into orbit. In other words, the cost is coming down to levels where “average” organizations can afford to put their own satellites into space. And this is great for both the public and private sector.

With several companies now working to perfect their own launch services, we will have guaranteed competitive pricing. That’s great for everyone.

We will keep a close eye on Astra going forward. Let’s add this company to our early stage watchlist.

The Loop underneath Las Vegas is being expanded…

In a big win for the future of transportation, the Las Vegas City Council recently voted to expand the Loop system underneath the city.

Longtime readers will remember that the Loop was developed by the Boring Company, which was founded by Elon Musk. It is a series of transportation tunnels beneath Las Vegas.

The initial plan was to build nearly a mile-long tunnel system directly beneath the Las Vegas Convention Center to shuttle conference-goers back and forth in modified Tesla vehicles.

This expanded Loop system will connect the convention center, casinos, and resorts in the city to each other and to the Las Vegas Airport.

To make this happen, the project will pursue an interesting financing model.

The Boring Company will fund complete development of the expanded Loop tunnel system. Presumably, the city will lease the use of the tunnel system from the Boring Company or its private backers. Then the casinos and resorts will fund the construction of the transport stations where passengers enter and exit the Loop. This is a creative approach to sharing the costs.

And the Loop is a great proof of concept for the Boring Company and Musk’s vision of the future of transportation.

It will reduce traffic on the streets above. And it will be incredibly convenient for consumers – especially on hot summer days when it is painful to walk outside the airport and stand in a long taxi line to get to the city.

I’m excited to watch the Loop’s progress. And I expect we’ll see more cities start to develop their own subterranean transport systems in the coming months and years. I can’t wait to go for a ride…

The rise of a new social media player…

Just when we think the social media playing field is set, a new company rises up. And that’s exactly what’s happened over the last six months.

A company called Discord just hit the 140 million monthly active user (MAU) milestone. That puts Discord on par with where Twitter was in 2012 when it began to see explosive growth.

For the readers who haven’t heard of Discord before, it started out in 2012 as a chat-based network that was popular among gamers and people working in the blockchain space. It was mostly a niche platform.

Discord just leveraged its success into a $100 million venture capital (VC) raise. This has more than doubled the company’s valuation. It went from $3.5 billion early last year to about $7 billion following this VC round.

With this scale, Discord is becoming a major player in the social media space. It has recently expanded its tech capabilities to enable screen sharing. And it now looks and feels a lot like Slack, which was just acquired by Salesforce for $27.7 billion last month.

And like Slack, Discord now has paid tiers. That’s a tried-and-true model, and it indicates that Discord is starting to be used outside of just the gaming and blockchain communities. It’s not just a niche platform anymore.

I’m excited to see what direction Discord goes from here. I would love to see it get into videoconferencing to compete with Zoom in that space. I think there’s plenty of opportunity there.

So we’ll keep an eye on Discord. This is a great example of a disruptive company that hit on a niche and expanded to become a major player.