Something is not right…

The numbers are diverging, which is what I’ve been worried about. They are almost always in lockstep.

Below, we see a chart of the Freddie Mac U.S. Mortgage Market Survey for a 30-year fixed interest rate loan. It’s the spike at the right since early this year that has me concerned. 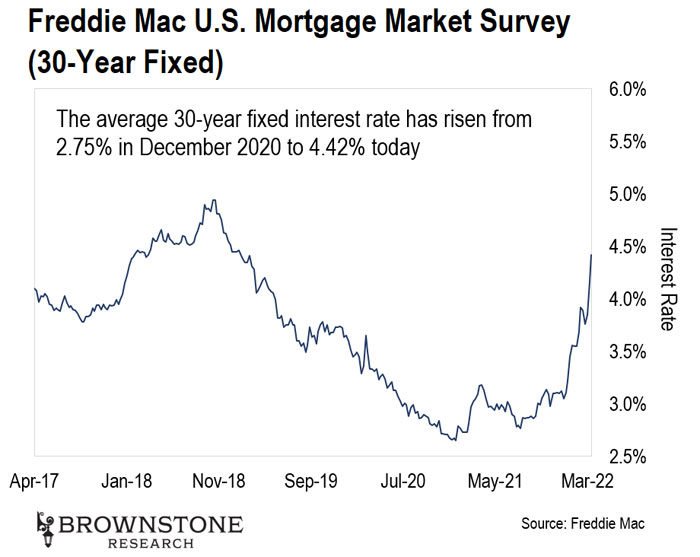 Freddie Mac – aka the Federal Home Loan Mortgage Corporation – is a publicly traded company that is known as a government-sponsored entity. Basically, Freddie Mac buys up mortgages from mortgage lenders. By doing so, it removes the risk of interest rate rises from the lenders and transfers that risk to Freddie Mac.

It’s supposed to be an independent company, but it’s not. It’s largely directed by the U.S. government to do its bidding. Because of this, it creates distortions in the mortgage market. Leading up to the financial crisis, mortgage lenders were incentivized to write the riskiest of loans – loans that they knew would likely become delinquent.

But they didn’t care, because they knew that they could package their junk loans and sell them to Freddie Mac. And that’s what they did. Of course, we know how well that ended…

Taxpayers paid the price for this irresponsible policy in the 2000s. Better yet, Wall Street barely got a slap on the wrist and finished out the decade with great fanfare – record bonuses.

Fast forward to today – the same thing is happening again. But now, the Federal Reserve is threatening (pretending) that it will aggressively raise interest rates throughout the rest of this year. Yet if it does so, it will destroy the housing market, and that wouldn’t end well either.

Which brings us to the chart above. The latest move by the Federal Reserve to raise the Fed Funds rate by a meager 25 basis points from zero really didn’t mean anything at all. But the survey gives us some insight about what the mortgage lending industry is trying to communicate to the Fed.

These average 30-year fixed interest rates have risen from around just 2.75% back in December 2020 to this latest spike at 4.42%. That’s an incredible rise in the last 15 months, and the last three months have been the most dramatic.

The lenders are essentially telling the Fed, “If you raise the Fed Funds rate any further, we’re going way above 5%, and it’s going to get very ugly.”

Housing prices are already at record highs due to the monetary policy-induced inflation. If the mortgage rates continue to spike, that makes them even less affordable because the monthly payment is simply too high.

And those who are on variable rate mortgages right now are feeling the pain. Monthly mortgage payments are increasing as well, and that means less discretionary income.

But my team and I are watching these dynamics like a hawk. I’ve never spent more time on government policy, geopolitics, and macroeconomics as I’m doing right now.

These “heavy hands” are now having an outsized impact on the markets, and we’ll need to adjust our investment and trading strategies accordingly.

With all that said, in less than a week, I’ll be hosting my State of the Tech Market strategy session.

There, I’ll address inflation… worries about rising rates… the impacts of geopolitical conflict… and the ways these forces are affecting our portfolios.

This year has begun with heightened volatility in the markets… and the rest of 2022 may remain turbulent.

That’s why I want my readers to get out in front of the opportunities this environment offers us.

In fact, there’s one specific asset that has proven to be inflation-proof… recession-proof… and even crash-proof. That’s why the wealthiest Americans have traditionally piled in…

And on April 6, at 8 p.m. ET, I’ll explain exactly how this asset class works… and why it needs to be a key part of our portfolios going forward.

If you haven’t already, please make sure to sign up to attend this event. Just go right here, and then tune in on April 6.

I’ll see you there.

Snap’s latest acquisition shows us where augmented reality is going…

We last checked in on social media company and augmented reality (AR) pioneer Snap back in June.

That was when it went all-in on AR by acquiring WaveOptics, a U.K.-based company specializing in lens technology. Snap incorporated this technology into the fourth generation of its Spectacles eyewear.

As we discussed last time, lens technology is a major point of differentiation when it comes to AR glasses. That’s why the WaveOptics acquisition was so important.

The AR pioneer acquired a brain-computer interface (BCI) company called NextMind. This is an even bigger leap into the AR space.

NextMind developed a BCI headband used for gaming. The headband uses technology similar to an electroencephalogram (EEG) to pick up brain activity. It then uses machine learning to understand the activity and translate it into action steps within a game. 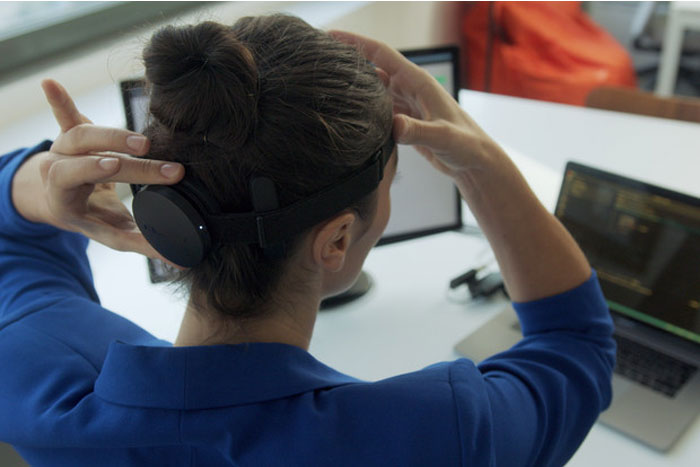 What I love about this is the fact that NextMind’s BCI tech isn’t tied to Snap’s current Spectacles product or any other first-generation AR headset. This technology represents a future generation of augmented reality. It’s what is coming down the line.

So Snap is thinking several product iterations ahead. This is something of a chess move. And when the market is ready, BCI tech for AR applications will catch on in a big way. (To learn how to get in position for the rise of AR, you can go right here.)

Imagine wearing a pair of AR glasses and being able to scroll through messages and emails with just our minds – right there in our line of sight.

In fact, anything we can do with our smartphone today, we could do just by thinking about it using BCI technology… without ever needing to raise a finger or open our mouth.

That’s why this deal is so interesting. Snap is clearly committed to being a dominant player in the AR space – both now, and years into the future. I’m very excited to see how Snap incorporates this technology into future product releases of its AR eyewear.

We talked several weeks ago about the first-ever fashion week held inside a metaverse. It turns out Nike made a huge announcement at the event. Nike revealed its strategy around non-fungible tokens (NFTs).

If we remember, Nike acquired NFT studio RTFKT back in January. The purchase price was rumored to be around $100 million.

Nike didn’t waste much time at all putting its new acquisition to work.

Nike quickly established its own virtual store inside the Roblox metaverse. It’s called Nikeland. Inside, it displays NFTs of sneakers (digital versions of sneakers) and other sporting goods for purchase right inside the metaverse.

Here’s a look at Nikeland’s exterior:

Here we can see the giant Nike swoosh floating over the building. Looks pretty neat, right?

It’s also functional. Get this – 6.7 million people from 224 countries have visited Nikeland since it opened. Amazing. A physical store would never see so much traffic.

This might seem a bit crazy… After all, why would anyone want digital versions of sneakers?

But that’s not what the acquisition was about. Nike is using the RTFKT design team to employ a “digi-fizzy” sales strategy. This is where consumers buy a digital NFT and receive the corresponding physical product in the mail.

Nike saw major dollar signs with this model… That’s what the big fashion-week announcement was about.

And by having a presence in a metaverse, it means that their reach is no longer limited to physical retail stores. Their market immediately became available to anyone who has an internet connection.

Nike hasn’t revealed sales data. But if I had to guess, I would bet that Nikeland has already sold well over $100 million in “digi-fizzy” NFTs. If I’m right about that, Nike has already recouped its investment in RTFKT in full in just a matter of months. Whatever they paid for RTFKT, they got a bargain.

This demonstrates how powerful NFTs within a metaverse can be for businesses. It’s not just about gaming – metaverses unlock incredible potential for companies in many industries.

And my readers and I will profit from the convergence of these trends. To learn how, simply go right here.

Credit Kudos is a competitor to the credit bureaus. These are the companies like Equifax, Experian, and TransUnion that track credit scores for every consumer.

No doubt Apple will use Credit Kudos to assess the creditworthiness of consumers who want to take advantage of Apple’s “buy now, pay later” financing options.

This makes perfect sense, as Apple’s higher-end products tend to be more expensive than average. Many consumers prefer to finance these products over time. Apple makes that easy.

However, Apple would not spend $150 million on Credit Kudos if it only wanted a cheap way to assess credit before offering financing options. It could always just partner with a credit bureau and pay for those services, as it’s not expensive to do so.

So I think there’s a much bigger play here.

We already know that Apple partnered with banking giant Goldman Sachs to launch its own credit cards in the U.S. It’s a beautiful product. Consumers can sign up and get approved for the card in minutes right from their iPhones.

Apple then ships a physical card… though it’s not needed. Consumers can pay for purchases right from their phones.

That was Apple’s first major move into the financial services business. The acquisition of Credit Kudos foreshadows expansion plans.

I expect Apple to launch a wider range of financial services offerings, including more traditional personal finance and banking products.

This may sound odd at first, but it’s perfectly logical.

If Apple can offer credit cards right from an iPhone or iPad, it could apply the same process to bank accounts, potentially loans, and other financial services products. Suddenly, our mobile devices become our banks, and Apple wants to be an elegant solution to our daily needs.

And that’s precisely why Apple acquired a U.K.-based company. This will keep Apple under the radar when it comes to U.S. banking regulators as it works to build out its financial services business.

So I see this as a precursor of things to come. The financial services industry is about to make a major digital leap while traditional banking institutions are quickly becoming less relevant.