But before we get to today’s questions, I’d like to tell you about a very special event happening in a few weeks…

As readers of The Bleeding Edge know, COVID-19 has ushered in a “golden age” of biotechnology.

Suddenly, the world has woken up to the potential of biotechnology.

Every venture capitalist and private equity house has realized how powerful these technologies are and how quickly biotech can move. We’re going to see an acceleration in biotech investment, early stage companies, and IPOs (initial public offerings) as a result.

Make no mistake: Some of the largest returns in the next few years will not come from cryptocurrencies, precious metals, or cannabis stocks. They will be found in biotechnology.

And there is one biotech stock that is at the top of my list. If investors only ever invest in one biotechnology company, I believe it should be this one.

Based on my analysis, I believe this company is on the verge of a major announcement, a cure for a rare genetic disease. Once that happens, the stock will soar, possibly going as high as 1,000%.

To share all the details, I’m hosting my first-ever free biotechnology master class on August 5 at 8 p.m. ET. And I’d love it if every reader of The Bleeding Edge could attend. Simply go right here to reserve your spot.

Now let’s turn to our mailbag…

Let’s start with a good question about school openings…

While children under 17 years may not be dying from COVID-19, that particular age group spreads germs and viruses. Therefore, transitions of infectious diseases cascade toward older age generations – spreading to their teachers, parents, and grandparents!

Hi, Arthur. Thanks for sending in your thoughts.

This has been a contentious topic recently. For readers who missed it, I recently wrote that I believed schools should open in the fall. Depending on where readers live, that can be as early as mid-August.

In response to that statement, I got a flood of responses from readers. Some agreed. Some disagreed… strongly. One reader even said that opening the schools would “kill millions.”

School-age children are indeed proving very resilient to COVID-19. In fact, they are more at risk of severe illness caused by influenza. But this is a common objection: Won’t the kids infect grandma? After all, the CDC reports that more than 80% of COVID-19 deaths have been in patients age 65 and older.

There’s a very simple solution to prevent this. We continue to protect the most vulnerable populations.

As I have written previously, the governors of five states (New York, Michigan, California, Pennsylvania, and New Jersey) required that nursing care facilities take in patients with COVID-19. That was an incredibly stupid policy… and criminal from my perspective. It resulted in thousands of unnecessary deaths.

The opposite should be taking place. Those who are 65 and older should be protected. Nursing care facilities should be testing their staff for temperatures daily and COVID-19 at least weekly.

Precautions can be taken, but the schools should open.

Children – especially young children – need a structured environment where they can learn and socialize. This is critical for their development. And for many children, sadly, their school-provided lunch is their best – or only – real meal of the day.

I say this as a parent. I have two young boys at home. I would do anything for them. In fact, I moved across the globe and pursued a new career just so I could ensure they had a healthy learning environment and the support that they required.

I’m sure some reading this now are parents or grandparents. And I’m sure we all want what’s best for our kids. It’s simply not healthy for children to be cooped up, away from their friends, and stuck in front of a laptop for months (or years) on end.

And I find it incredibly irresponsible for teacher unions to be demanding political action as a prerequisite for opening schools. That’s what we’re seeing with the LA teacher’s union. It is demanding defunding the police and the implementation of Medicare-for-All before the schools open.

And an official from the World Health Organization suggested that it may be “very rare” for asymptomatic carriers of COVID-19 to spread the virus. Kids are often asymptomatic.

In other words, the parents will likely be fine. And when the asymptomatic population has been factored into the actual case fatality rate, healthy people under 70 could have a survival rate as high as 99.96%. That’s better than influenza.

Perhaps readers will disagree with me on this. But I stand by my statement. The research and the numbers are real. These politics are coming at the grave expense of the health of children. It’s time to open the schools.

The end of genetic disease is getting closer…

Next up, a question about CRISPR genetic editing technology…

With this CRISPR thing, I am a little perplexed, as I am about your statement that we live longer as a result of modern medicine and pharmaceuticals. “As a reminder, CRISPR is like software programming for DNA. It allows us to ‘edit’ genetic mutations that cause many diseases. Ultimately, CRISPR will help us cure all human disease of genetic origin.”

Modern medicine and pharmaceuticals are responsible for more harm and death than virtually any known virus, disease, or pandemic. Iatrogenic death alone accounts for a large number of deaths in the U.S. alone.

Side effects of vaccines kill and maim our children and older adults at incredible rates or numbers. I can’t think of even one vaccine that actually cured anything. Even polio, which doesn’t have hardly any amount of wild polio any longer but does have a large number of incidents of the laboratory type of polio all over the world, especially after the vaccine has been given in a particular region.

Thanks for your question, Christian.

I have compared CRISPR genetic editing technology to “software programming for our DNA.” The technology can edit our DNA as if it were a software code. In essence, CRISPR can correct any “bugs” in our genetic code that lead to disease.

And yes, I’m on record saying that CRISPR has the potential to cure every disease of genetic origin.

But I have to disagree with you when you say that modern medicine has caused more deaths than virtually any disease. A cursory look through history will tell us that that’s simply not true. The Black Plague alone killed an estimated 25 million people, or about one-third of Europe’s population.

Yes, the progress of modern medicine hasn’t been perfect. Accidents and unforeseen side effects can and have caused unnecessary death. But medical technology has been an incredible net good for society.

You mentioned polio. As recently as 1981, there were an estimated 459,000 global cases of polio. Today? The disease is virtually nonexistent. We have modern medicine and vaccines to thank for that.

Now let’s consider the problem of genetic disease. There are more than 6,000 diseases caused by genetic mutations. Worse, 95% of them have no approved therapy or treatment.

To understand the scale of the problem, consider the following:

CRISPR technology has the potential to solve all these problems permanently. And we’re already getting indications that CRISPR works.

During the STAT biotech conference, we heard about safety and efficacy data from the world’s first CRISPR genetic editing human trial. The results were outstanding.

Researchers had treated two patients with CRISPR therapy – one with sickle cell disease and the other with beta thalassemia. Both of those patients have now been free from disease symptoms since the treatment.

At the time, the beta thalassemia patient had not needed a blood transfusion in nine months. This was amazing considering patients with this disease typically need blood transfusions every two to four weeks.

And the sickle cell patient had not suffered a crisis in four months.

That bears repeating. The patients were free from symptoms and blood transfusion-independent for months. That has never happened before.

And in June 2020, close to the one-year anniversary of receiving the treatment, the sickle cell patient provided an update on her progress. The treatment has alleviated “virtually all the complications of her disorder.”

The CRISPR treatment has had similar long-term success with beta thalassemia. A second patient with the disease has been treated as well. Within five months, that patient was able to stop receiving blood transfusions.

Forgive me for stating the obvious, but this is just incredible.

This wasn’t a case of just an improvement or some demonstration of efficacy; the genetic therapy was a complete cure of their fatal conditions.

Recently, readers of one of my investment research products, Early Stage Trader, locked in a gain on Akero Therapeutics (AKRO).

Here are a few subscribers who wrote in with some feedback.

Joined in March. 100 shares. Sold within minutes of your text. 57% profit for a little over four months. Sweet! However, thought it would continue to go down instead of back up. Jeff, you’re the best.

I am a subscriber to all three of your newsletters for over a year. Unfortunately, I didn’t see your sell alert in time and had to wait a couple of days to get past the major selling pressure, but I managed to sell today at $38 per share for an overall return of 90%. I am very much looking forward to future trades.

Jeff, I just completed my sell order with an 85% profit in under seven months! Thank you, Early Stage Trader!

Thanks to all of you for writing in with your experience. I’m thrilled to hear you found success with my research. This is precisely what Early Stage Trader was designed for. We establish a position in developmental-stage companies ahead of major catalysts. Then we lock in profits once those catalysts shoot our portfolio companies higher.

Akero was a company I had been tracking closely even before its IPO. And I knew that Akero was on the verge of releasing clinical trial results for its Phase 2a clinical trial of AKR-001 in NASH patients. We established a position in January.

Sure enough, the trial results were positive. The stock popped in June. We held on for a few more days and ultimately locked in gains of 87%. Some readers did even better. 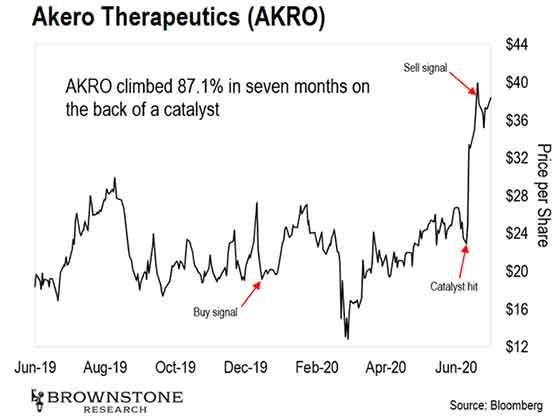 We now have more than a dozen early stage companies in our portfolio. Each of them has major catalysts in the weeks and months ahead that could shoot their share price higher. And I’m actually doing my due diligence on our next trade. I plan to release it in the next few weeks.

If any readers are interested in joining Early Stage Trader, go right here.

That’s all the time we have this week. If you’d like me to answer your questions, write to me here. I’ll do my best to get to it next week.