Yesterday, we saw new research. It indicated that the COVID-19 infection fatality rate for healthy people under 70 years old is around 0.04% – at or below the level of seasonal influenza.

I found an interesting third-party chart based on data taken from the Centers for Disease Control and Prevention (CDC). It breaks down the data by age group and week.

The values that we see in the chart below were constructed by calculating the number of deaths per 100,000 population in the U.S. A typical influenza death rate for a full year is 15.

Going off this analysis, the chart shows no statistically elevated risk for fatally contracting COVID-19 compared to influenza for those 64 years old and younger.

(Note that a zero on the chart does not mean there were zero deaths. It simply means there was less than one death per 100,000 people for that week and age group. That’s how it is statistically represented.)

As for the 65–74 age group, we saw an elevated death rate at the height of the pandemic in the U.S. It has now dropped down to only 0.002% a week – the equivalent to influenza on an annualized basis.

We should remember that the strongest argument for those who want to keep the schools closed in the fall is that the kids may be fine, but they will spread it to their parents and grandparents, who are more likely to die.

Well, going off this analysis, that is not true. Parents and most grandparents of school-age kids are 74 years old or younger.

The risk does increase above 75 years old beyond that of influenza. But as we can see, that age group had its worst elevated risk during weeks 14 through 22. That was a nine-week period early on in the outbreak when the medical community was still trying to figure out how best to treat COVID-19 patients.

The group that remains truly at risk are those 85 years or older. They are the most vulnerable population every single year for very obvious reasons.

And what did the governors of California, Massachusetts, New Jersey, New York, and Pennsylvania do?

They mandated that nursing homes take COVID-19 patients even though every single one of those states had excess hospital and ICU beds available even at the height of the pandemic.

And which states experienced the highest numbers of COVID-19 deaths at 85 years and above? California, Massachusetts, New Jersey, New York, and Pennsylvania are near the top of the list.

There is great news to extract from this analysis. It shows that trend of deaths per 100,000 population for those 85 and older has been declining since week 16. Assuming that trend continues, the fall is going to be far better than anyone thinks.

With this data available, do we still think that the logical, rational decision is to shut down the schools in the fall? Should we deny our children and grandchildren their education, well-being, and sometimes nutrition?

As my younger son often tells me… “No way!”

It turns out that Google has been quietly funding the development of smart tattoos. These are rub-on tattoos that turn the wearer’s skin into an interface for computing systems. Here’s a visual:

As we can see, these tattoos can be applied to uneven surfaces on the body, like our knuckles. They consist of conductive ink with tiny sensors. Once connected to a computing system, manipulating the tattoo’s sensors will perform specific actions.

For example, this knuckle tattoo could be interfaced with a robotic arm. Then, when the user squeezes his or her fist, it would cause the robotic arm to squeeze its “fingers” also.

In this way, humans could control robots simply by making the desired movements. No other wearables would be required other than the smart tattoos.

What I like about this is that the tattoos create a computing interface without any expensive hardware. And because they can be printed using conductive ink, they can be manufactured inexpensively. So cheap, in fact, that I can envision one-time use. Afterward, we would throw them away.

Users can apply the tattoo, perform the desired tasks, and then remove it. No upkeep required. They are almost like children’s rub-on tattoos with a bit of tech added.

That will lead to many different applications for this technology. And the fact that Google has been experimenting with this technology through an intermediary might indicate some interesting plans.

To keep the research hidden, Google has been using its faculty research awards to fund development at Saarland University in Germany – away from the public eye.

I’m excited to see what comes of this. We know Google has been working on “smart” clothing and accessories before with a strong focus on brand. Previous efforts weren’t very accessible and remained only a niche offering. This could be something different due to the low cost of manufacturing and the potential use cases.

When it comes to these smart tattoos, they could completely change how humans work with computers and robots in the future.

Why I am bullish on the global economy right now…

If we want to gauge the prospect of economic growth, we need to keep our finger on the pulse of the semiconductor industry.

After all, if demand is high today, that means those semiconductors are going into products that will be manufactured and sold in a few months’ time. And the best way to know what’s happening in the world of semiconductors is to watch Taiwan Semiconductor Manufacturing Company, or TSMC (TSM).

Many semiconductor companies don’t manufacture their own chips. They outsource that task to foundries. And TSMC is the world’s largest semiconductor foundry.

Intel is the notable exception. This “old guard” company has always made its chips in-house. But get this – Intel recently announced that it would likely outsource production of 7 nanometer (nm) chips.

The logical choice would be TSMC. Intel is now so far behind technologically, it is having to look for someone else to manufacture its semiconductors… This would be the first time in the company’s history that happened. TSMC’s share price rocketed higher on the news.

So if we want to know what’s happening in the semiconductor space, we have to watch TSMC. And the company’s second-quarter earnings release was simply incredible…

TSMC just reported that sales for the second quarter were up over 34% year-over-year. And that’s in the middle of a pandemic. How’s that for impressive?

As a result, the company raised its outlook for 2020. TSMC now expects sales to grow more than 20% this year.

And readers of The Bleeding Edge won’t be surprised to hear that TSMC is getting record orders for semiconductors used in 5G infrastructure. Robust demand for 5G semiconductors was a big part of TSMC’s increased sales outlook for the year.

This tells us that 5G infrastructure is being aggressively deployed around the world. The 5G boom is accelerating.

TSMC is also seeing increased demand for semiconductors used for high-performance computing in data centers. No surprise here either – we already know that COVID-19 has created a major increase in wireless network usage and wired network usage around the world.

The increased use of artificial intelligence (AI) and machine learning (ML) is also a big part of this high-performance computing demand.

If we listen to the mainstream press, we might assume the global economy was on the verge of collapse. These are indeed tough economic times caused by decisions regarding the pandemic. But I see reason to be optimistic…

TSMC’s outperformance is bullish for the global economy. When we see demand for semiconductors increasing, we know that demand is followed by increased economic activity.

And this is especially bullish for the tech industry… specifically, the big investment trends we follow in my research services. 5G, AI, cloud computing, and precision medicine are major beneficiaries of this explosive semiconductor demand.

The monumental rise of biotechnology…

I am on the record saying that the 2020s will be the decade of biotechnology. And I don’t mean that to be hype. It’s rooted in the data. Look at this chart: 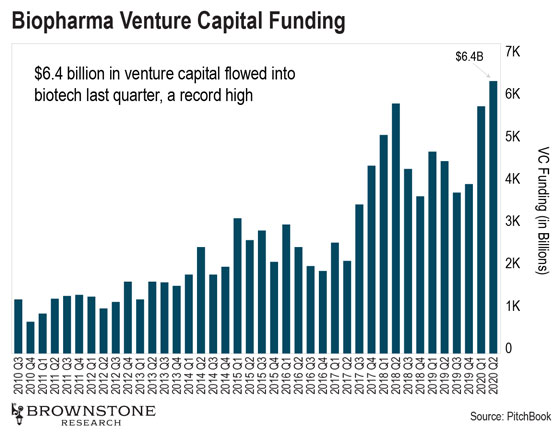 $6.4 billion in venture capital (VC) flowed into the biotech industry this past quarter. That makes Q2 2020 the industry’s single best quarter in history for VC funding.

And that’s just the start…

And if we include secondary offerings – the sale of new shares by publicly traded companies – the biotech industry raised a whopping $24 billion in Q2 2020.

That’s an incredible amount of capital flowing into the space, all while much of the global economy was forced into economic lockdowns. Biotechnology conferences, medical symposiums, and analyst events didn’t happen, and it was still a record quarter. Incredible.

And here’s the thing – this is not a bubble. This is simply a massive shift in the industry.

The early stage biotech industry is quite different than normal tech companies. It is seen as being far riskier, difficult to understand, and capital intensive. It was often a decade before a drug ever got approved. That’s because the industry was a lot more “bio” than it was “tech,” which meant it moved a slow pace.

That has changed. And we’ve seen it happen during the first six months of this year.

Today’s biotech companies employ bleeding edge technology – semiconductors, information technology, AI, robotics, and machine learning. Because of this, they can move as fast as other tech startups when they are properly funded and incentivized.

Private capital sees this, and investors are allocating more capital to the industry accordingly.

As a result, we will see wave after wave of biotech IPOs in the coming years, providing us with more great biotech investment candidates than ever before. And this will lead to all kinds of medical innovations that will benefit humankind.

But that doesn’t mean we should throw money at every biotech company that comes our way.

Any time there’s this much capital pouring into an industry, it allows a lot of companies to explore new ideas and approaches. That’s a good thing – it’s where breakthroughs come from. But it’s important to know that many of these new approaches will fail. That’s true of every industry.

As investors, we need to focus on the highest-quality teams pursuing the most promising therapeutic approaches. That’s how we get outsized returns.

And if investors are wondering which biotechnology company I recommend, there is one company that stands out to me.

This company is on the verge of releasing clinical trial data for a therapy to address one of the world’s worst inherited diseases. And based on my analysis and “boots on the ground” research, I believe the therapy will be a smashing success.

If I’m right – and I believe I am – we could see triple-digit returns in a matter of days. Even 1,000%+ returns are not out of the question as this plays out.

To get all the details, I’d encourage readers to join me next week, August 5, at 8 p.m. ET. I’ll be taking attendees to the biotechnology capital of the world: Cambridge, Massachusetts.

There, I’ll reveal what I’ve learned about this small biotech stock. Reserve your spot right here.