It has been a couple of weeks since we looked at the U.S. jobs numbers.

With the continued spike in new COVID-19 cases, it would be logical to expect that many businesses are being cautious about rehiring. After all, many states are putting more restrictions in place in hopes of slowing the spread of the virus. 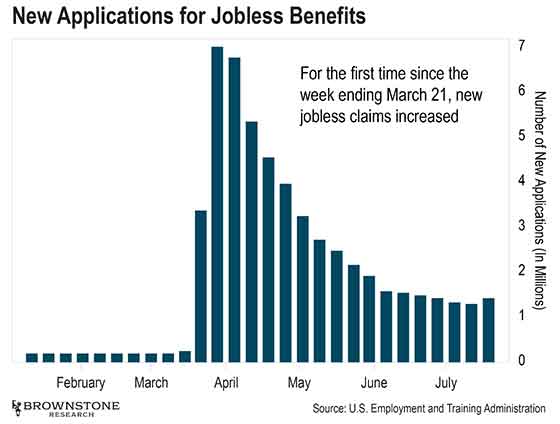 However, continuing claims, a far more important indicator at this stage, decreased from 17.3 million to 16.2 million. It is worth mentioning that the continuing claims number lags a week behind the new jobless claims.

But as long as the continuing claims number continues to drop, that indicates that more people are rejoining the workforce than are losing their jobs. That would spell a recovery in the jobs market.

As always, I’ll keep an eye on the data.

But now let’s turn to our insights.

Wall Street is betting on the “next Tesla”…

Have you ever heard of a company called Rivian Automotive?

I doubt many of us have.

Rivian is a private electric vehicle (EV) company that looks like something we would see in Silicon Valley. But it is based in Michigan. Rivian claims to be building “electric adventure vehicles.” Here’s what one of their pickup trucks looks like.

On the surface, Rivian Automotive resembles a young Tesla (TSLA). And Rivian has certainly leveraged Tesla’s soaring stock price to its own advantage.

The company just raised a whopping $2.5 billion in private capital earlier this month. That’s an incredible early stage raise that even the best private companies rarely pull off.

I know what we might be thinking. Rivian may be the “next Tesla.”

But I’m not so sure…

The top venture capital (VC) firms in Silicon Valley aren’t backing Rivian. In fact, not a single penny of that $2.5 billion raise came from a VC firm.

Instead, investment firms like T. Rowe Price, Baron Capital, BlackRock, and Fidelity led this raise. These aren’t the companies that typically back bleeding-edge early stage startups.

That’s not the case with Rivian. This company hasn’t manufactured a single commercial vehicle for sale yet. It is still a pre-product revenue company. I don’t know what valuation this last round of investors put money in at, but I’d be willing to bet it was way too high.

To me, this is mostly dumb money chasing a hot trend. These investment banks watched TSLA soar nearly 300% this year and got the itch to speculate on the “next” Tesla. After all, there is no company like Tesla… not even close.

And Tesla is ridiculously expensive at these valuations, so the market wants another next-generation car company.

But I am not at all convinced that Rivian Automotive has what it takes to achieve the same success as Tesla. Far from it.

About the only credible thing Rivian has done is ink a deal with Amazon for 100,000 electric delivery vans. Yet the delivery date for those vans isn’t set until 2030. That’s 10 years out. Why does Rivian need so long? It makes me question how solid the deal is.

So I am not optimistic about Rivian’s prospects. And neither are the top VC players in Silicon Valley. I’m sure that many of them took a look. Clearly, they passed for a reason.

This robotics breakthrough could make household robots a reality…

MIT’s Computer Science and Artificial Intelligence Lab (CSAIL) just developed a two-fingered robotic arm that can do things no robot has been able to do before. Have a look:

As we can see, the robot can grab a cable, find the plug at the end, and plug it into the corresponding device. It’s hard to understate how big of a breakthrough this is.

Fine motor skills have been the hardest thing to replicate in robotics up to this point. We have had robots that can lift and move heavy objects for years now. But those robots don’t have the dexterity necessary to handle smaller, more fragile objects. That’s why their use has been limited to factories and warehouses.

To simulate dexterity, the team at MIT embedded tiny sensors into the robot’s two “fingers.”

These sensors are powered by what’s called “GelSight” technology. This tech provides data on how an object is situated between the two fingers as well as how much force is being exerted on it. This allows the robot to change its grip as necessary in real time.

We can imagine this technology being used to enhance and improve robotic surgeries. This will start with simple stitching and suturing tasks, but eventually, robots will be able to perform more complex surgeries.

I can also imagine this tech being deployed in hyperscale data centers. Configuring these massive data centers is a tedious task that requires organizing tens of thousands of Ethernet and power cables.

It’s time-consuming, arduous work that would be well suited for these kinds of robotic arms and fingers. The robots can do manual labor 24/7, making them far more efficient than human technicians.

So I am very excited to see where this development from MIT goes. We aren’t that far away from a world in which useful robotic help is available to most homes and offices.

Competition in the analog semiconductor industry is heating up…

What’s happening in the analog semiconductor industry right now is game changing. And it starts with Analog Devices (ADI), which is one of the most impressive companies in this space. I’ll give readers the scoop in a minute, but first a little background…

Analog semiconductors are used to connect the real world with the digital world.

Analog semiconductors are used for things like measuring temperature, sound, speed, or electrical current. They are used to manage power in electrical systems. They are used in pretty much any electric device that we use throughout the day.

And right now, there’s a big push in the analog semiconductor industry to be well-positioned for the explosive market for electric vehicles and self-driving cars and trucks.

To that end, Analog Devices just announced that it is acquiring Maxim Integrated Products (MXIM), another analog semiconductor company, for $20.9 billion.

I see this as a power move. Maxim’s product portfolio is complementary to Analog’s, and it will open the company to new markets and increase the company’s overall market share.

And this comes on the back of Analog’s acquisition of Linear Technology in 2017. Analog Devices is up to something with these moves…

What we are witnessing here is a rapid consolidation in the industry, geared toward driving competition among the top companies. Analog Devices is creating a company that can go head-to-head with analog semiconductor giant Texas Instruments (TXN).

Texas Instruments has dominated the industry for decades. It has had a tremendous advantage for a long time due to its scale. Greater scale enables a lowered cost of manufacturing. And it also creates leverage in semiconductor distribution channels.

This is a step up for Analog Devices, and it will certainly change the competitive dynamics in the industry. I’ll be keeping a close eye on Analog Devices’ integration plans and product strategy.

Deals like this, however, tend to take as much as a year to gain approval. Regulators in the U.S., Europe, and China will have to sign off of the acquisition before it can be officially completed.