Editor’s note: We’ve recently been sharing some of our premium paid content with Bleeding Edge subscribers over the last couple of weeks.

And today, we’re bringing readers some of Jeff’s insights about the private investment space. While public markets have been rattled this year, private investments are far more stable… and the view ahead shows even more potential…

Investors are facing one of the most volatile stock markets in recent memory.

Investors are in a tough spot right now. Conventional safe haven assets aren’t earning yields that can beat the high rate of inflation… and the sectors that were favored in the last high-flying bull market – tech and digital assets, for example – are now too risky for many investors.

However, if we look outside of these investment classes, there is a whole group of assets insulated from the daily gyrations of the stock market today…

A Shelter From the Storm

I’ve been an active angel investor for more than 20 years.

And in times of market volatility, private markets are a shelter from the storm. They simply aren’t affected the way publicly traded companies are. For example, private companies don’t have to make bad short-term decisions in order to meet the quarterly guidance that public companies are held to.

So private investments are one of the few ways we can grow our wealth even in a market downturn.

The truth is, I love investing in private companies during market volatility. In a hot market, venture capital (VC) funds tend to throw money around at elevated valuations in order to beat each other out of an attractive deal.

But in volatile times like this, investors tend to be able to invest at even more attractive valuations in high-quality deals.

So let’s look at what we’re seeing right now…

As we might expect, the overall rate of private investment inevitably starts to moderate during periods of economic uncertainty: 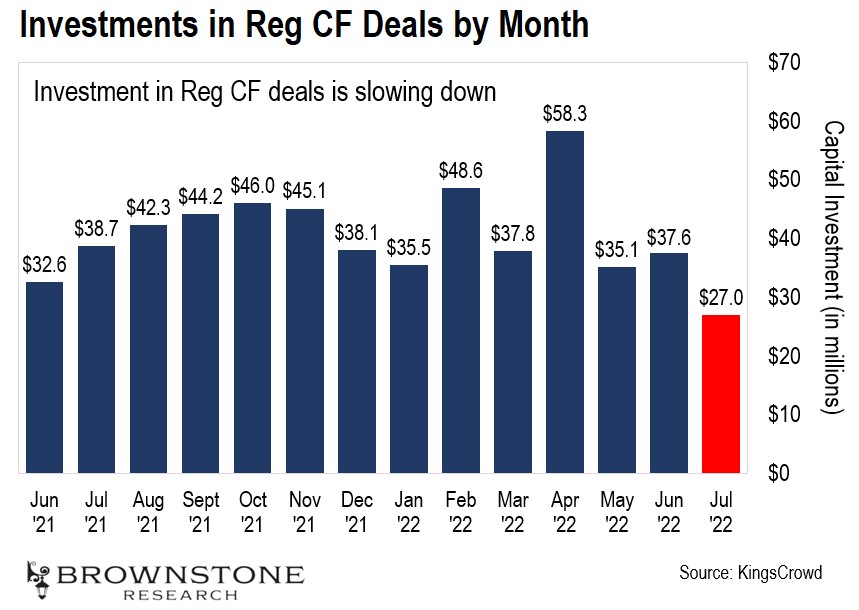 I’ve also been noticing through my own channels that VC firms have become a lot pickier with their investments in this environment. They have the capital but are allocating it more cautiously.

Let’s have a look at this remarkable chart below: 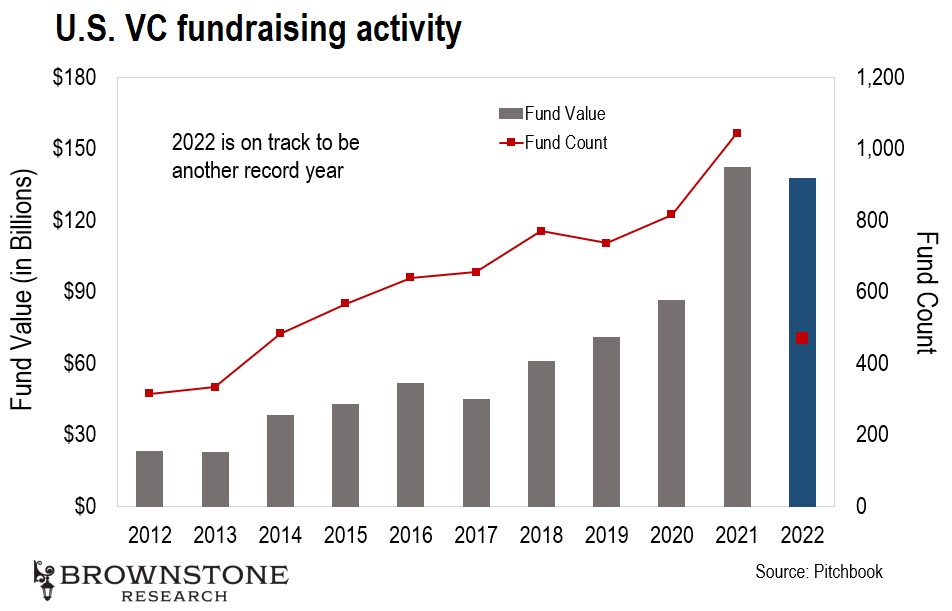 We can see that, year-to-date, U.S. venture capitalists have already raised $137.5 billion. That is almost on par for the full year of 2021, which in itself was a record year.

2022 will once again be a great year for VC fundraising and has the potential to exceed $200 billion with ease.

What this means for us as private investors is that there is a record level of “dry powder” out there, ready and waiting to fund the most exciting and promising private companies… regardless of what is happening in the economy.

This is what I love about the private markets. They are thriving despite the chaos in the public markets.

And as I look ahead, I see even more opportunities to gain exposure to the private markets over the coming year.

The Next Wave of Private Powerhouses

This environment can be difficult for early-stage companies that are low on cash and will need to raise capital again soon. It often puts the venture capitalists in a much stronger negotiating position compared to the early-stage founders and their early investors.

Fortunately, members of my private investment advisory, Day One Investor, don’t have that problem.

For the kinds of “cashed-up” private companies we invest in, these circumstances give them something of a leg-up on their competition. They can keep raising money without risking a cash crunch in the future.

They can put their head down and focus on building. Then, when the economy springs back to life, these private companies will be in a great position to grow rapidly.

Over the last eight months, I’ve recommended various private companies to my subscribers, leveraging trends like metaverses, gaming, blockchains, and NFTs. And we’ve even diversified into consumer products like a gluten-free and vegan cookie maker and a single-serving coffee company that could unseat Keurig.

My commitment to subscribers is 50 deals in five years. That means that I will deliver at least 50 “day one” recommendations over the next five years.

It’s an exciting time for early investors to get in on the next wave of private deals. And we’re only getting started…