And it’s not a chart of some tiny, highly speculative microcap company. This is a one-year chart of none other than Netflix (NFLX), one of the greatest tech stories of all time. 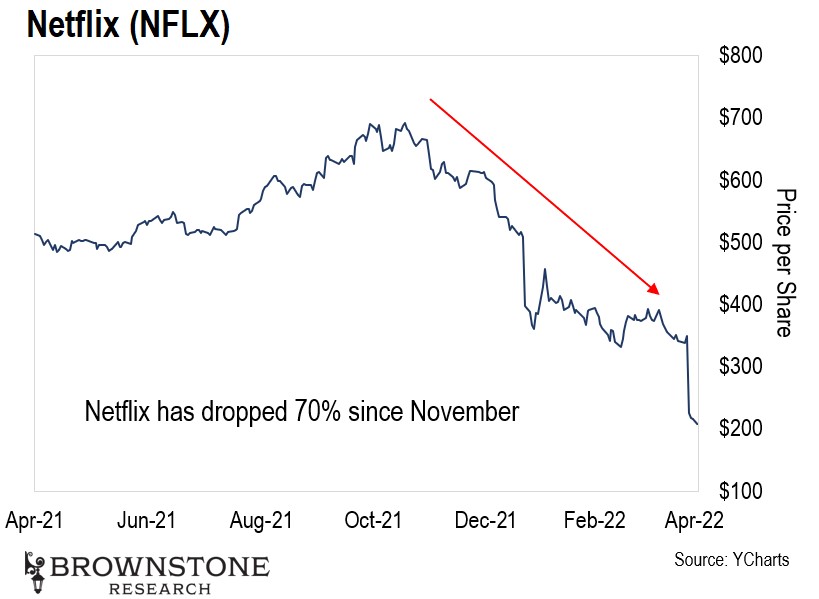 Netflix was already a giant before the pandemic, but we all know what happened next. Subscriptions jumped through the roof as we were all stuck at home with more free time on our hands.

Netflix’s stock rocketed higher by about 130% from the March 2020 pandemic lows to more than a quarter-of-a-trillion-dollar valuation.

And then, as things started to return to normal, subscriber growth started slowing down. Compounding Netflix’s growth slowdown was a shift in programming. Netflix ramped up investment into producing programming that many consider to be overtly controversial, and even unethical.

By January of this year, the proof of this started to show up in the numbers. Netflix collapsed 29% in a day after its January earnings announcement.

And here’s the funny part. Notorious hedge fund manager Bill Ackman of Pershing Square Capital Management had been amassing a 3.1 million share position in Netflix as the stock began pulling back from its highs, thinking it was a good deal.

But the problem is that the bad news wasn’t over. It got worse. And Netflix again collapsed more than 40% in a day following its April 19th earnings announcement. Ouch!

The pain was so bad that Ackman had to close out his entire position in Netflix for what is estimated to be a $435 million loss.

Can you imagine losing $435 million in a matter of months when you’re supposed to be one of the best hedge fund managers in the world charging 2% of assets a year just to make decisions like that?

When I think back to late last year, Netflix was trading at an enterprise value around 10 times annual sales.

For a high-growth software company growing revenues at 30% a year, and 80% gross margins with fantastic free cash flow generation, that would be a reasonable valuation. But that’s not Netflix.

Netflix’s future growth flattened out to single-digit, year-on-year growth with gross margins around 41%.

And because Netflix has been spending so much money on new programming, it actually had a negative free cash flow of $132 million last year. Those kinds of metrics don’t justify 10 times sales. And for that reason, Netflix is toxic. That’s why my subscribers weren’t going to find Netflix in my Near Future Report portfolio.

It reminds me of another pandemic hot stock, Zoom Video Communications (ZM), which was also a toxic stock that I predicted would collapse. Since its August 2021 high, the stock has fallen off a cliff by 75%.

There’s nothing wrong with the technology behind either of these companies, or their business models for that matter. The issue is whether or not the valuations made sense given the state of their businesses.

And that’s something that we would think a sophisticated investor like Ackman would have figured out.

SpaceX is getting serious about putting humans on Mars…

All eyes are on Elon Musk and Twitter right now. So, I wouldn’t blame us if we missed another major announcement from Musk.

But this is one we don’t want to miss. Musk’s latest announcement is out of this world and has huge implications for space exploration.

Elon Musk just announced that SpaceX plans to build 1,000 Starships over the next 10 years. This will give SpaceX the ability to send one million people to Mars by 2050. It’s getting real…

We have talked about SpaceX’s Starship several times in The Bleeding Edge.

For the sake of new readers, the Starship is the world’s first reusable all-purpose spacecraft. It’s made of stainless steel and shaped like a giant corn silo. Which makes it a bit crazy that this is the spacecraft that will power NASA’s manned mission to the Moon in 2024.

As for its measurements, the latest version of the Starship is 394 feet tall and 30 feet wide. And it’s capable of carrying over 100 metric tons into space. Here’s a visual: 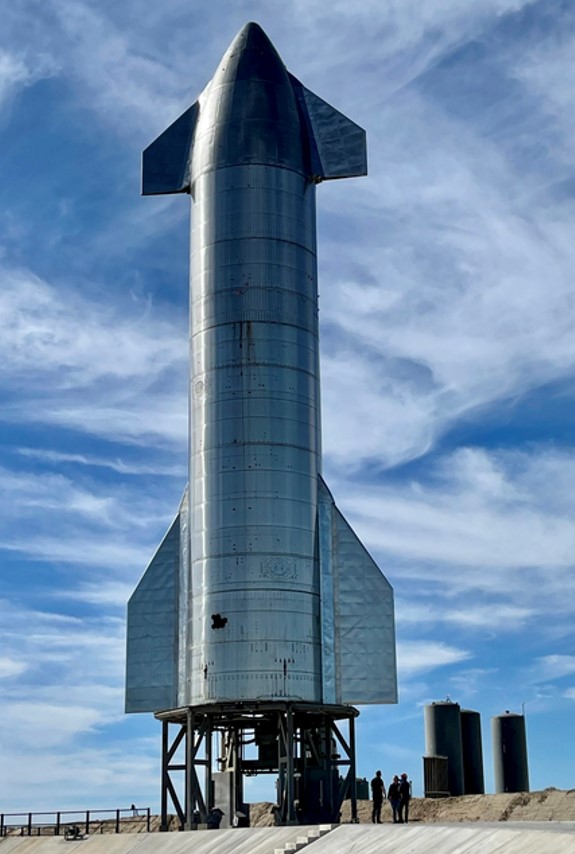 Here we can get a sense of just how massive the Starship is. This is the spacecraft that will enable humanity’s first inter-planetary colony.

Mars is rich in raw materials like oxygen, carbon dioxide, and water ice. These materials can be used to create methane, which is a great fuel propellant.

Musk’s plan is to build a fuel manufacturing facility on Mars. That will be a major priority for some of the first manned missions to the Red Planet.

Being able to make fuel on Mars will reduce the need to carry extra fuel into space in order to support return missions. By manufacturing fuel on Mars, it will enable many of the Starships to return back to Earth to be reused again, which will reduce overall costs of inhabiting Mars.

But in order to pull this off, we’ll need a lot of spacecraft. That’s why the announcement of 1,000 new Starships is so incredible.

What makes this announcement even more meaningful is that all the technology to make this happen exists today. Musk and his team at SpaceX have already built the heavy launcher, and the Starship has already had a series of successful suborbital flights.

Musk thinks that with reusability and mass production, SpaceX can ultimately get the cost of an individual ticket to Mars down to about $100,000. That’s not exactly cheap.

But it is a price point that those who are willing to make the journey could save up for. I could even envision companies sending some of their executives and employees to the Red Planet to support the expansion of their businesses. Who wouldn’t want to be part of building a multi-planetary business operation?

The bottom line is that we could very well have a manned presence on Mars within the decade. This idea would have sounded crazy 10 years ago… but not today. The technology exists. And SpaceX already has a clear plan in place to make it a reality.

Of course, there are still some major milestones that SpaceX must hit before any missions to Mars.

The company is gearing up for its first orbital launch of the Starship next month from its Boca Chica facility in Texas. That’s the next step. Presuming things go well and SpaceX has a series of successful test flights, it is theoretically possible to support a manned mission to the Moon in 2024.

After that, Mars won’t be that far behind.

Coinbase just launched the beta version of its non-fungible token (NFT) marketplace. This is a major milestone for the digital asset industry… and it has important implications for investors.

As a reminder, Coinbase is the world’s largest digital asset exchange. It now has nearly 90 million verified users on its platform.

And think about this – Coinbase has almost three times as many users as Fidelity, which is the largest traditional stock brokerage. Fidelity has just 33.2 million client accounts.

That’s why this is such a big deal. Coinbase is about to expose a lot of people to NFTs as an asset class.

That said, the NFT marketplace isn’t open to everyone yet.

Coinbase created a waiting list last fall for people interested in test-driving the beta version that just launched. 8.4 million people signed up. Of course, I was one of them.

I’ve had the chance to play around with the platform a little bit so far, and I can tell that Coinbase designed it for mass adoption. It’s not perfect yet, hence the beta release, but it doesn’t take much imagination to see it coming together.

For starters, they are embedding social media elements into the platform. Users can create a profile to display their NFT purchases. Then people will be able to “follow” and interact with each other, just like they do on other social media platforms.

This is smart. The success of Robinhood and the rise of “meme stocks (and coins)” has demonstrated that people, especially younger investors, are attracted to investment platforms with a social element to them.

In addition, Coinbase will eventually enable users to purchase NFTs directly with U.S. dollars and even credit cards. This will open the door to investors who might not have large cryptocurrency holdings, but would still like to invest and/or speculate in NFTs.

Needless to say, this is very bullish for NFTs.

At the end of 2021, there were about 2.5 million active NFT wallets. But as I just shared above, Coinbase has 90 million users on its platform. Even if a fraction of these users enters the NFT ecosystem, we could see adoption of this technology soar.

Many investors assume that the only way to generate investment returns from this trend is to buy individual NFTs. Doing so can be a lot of fun and rewarding, but it is very time consuming, risky, and requires quite a bit of specialized knowledge.

An alternative that is less risky, yet still contains fantastic upside, is to invest in the projects providing the infrastructure and services to the NFT community. It’s a classic “picks and shovels” strategy. And now is a perfect time to take a position in these projects, before Coinbase’s NFT platform goes live to the masses.

Specifically, there are three “NFT Coins” I recommend investors to take a position in. Out of respect to my paying subscribers, I won’t name them here. But if we’d like to learn the names of these three NFT investments, I’d encourage us to go right here.

The metaverse trend hasn’t slowed down…

We’ll wrap up today with an exciting development in the metaverse space.

For the sake of newer readers, a metaverse is a virtual world where we can perform many of the same activities we’d do in the real world. We can visit with friends, play games, and explore new worlds.

And what separates a metaverse from “just a video game” is the built-in economic incentives. Today, there are thriving businesses and economies in metaverses like Decentraland. There are shopping districts, casinos, and even private real estate owned and developed by individuals.

And one of the most popular metaverses out there, The Sandbox, is in the process of raising another $400 million in venture capital (VC) funding. Most impressive, this next raise will happen at a $4 billion valuation.

To put this in context, The Sandbox’s seed round happened in September 2019. It raised a measly $2.7 million to build out its metaverse.

So here we have a company that’s gone from what was likely a sub-$20 million valuation to $4 billion in less than three years. Incredible.

And get this – The Sandbox has increased in value 10X just since last summer. Most of the growth has happened since early 2021. New capital continues to flood into this space because the scale of the opportunity is simply so large.

What I like most about this is that this funding will accelerate development of The Sandbox metaverse. And that should result in increased economic activity within the metaverse itself.

The big takeaway I’d share is this: Many investors still assume that metaverse technology is a passing fad. That couldn’t be further from the truth.

Here we have a best-in-class metaverse company attracting nearly half a billion dollars in funding and sporting a valuation comparable to a small-cap public company. That simply doesn’t happen unless there is serious potential for growth.

Metaverses aren’t going away. And we are still so early.