Fear can be good.

It almost certainly kept man alive in the early times. A hungry beast appears, fear sets in, and the swift survived.

But for investors, fear is mostly bad.

We usually regret choices made from temporary fear. After all, it’s often rooted in uncertainty rather than actual knowledge or survival.

Uncertainty causes worry and can make us fumble… sometimes spectacularly.

For instance, Ronald Wayne worked at Atari with Steve Jobs and Steve Wozniak. Together, they all started Apple.

Ronald Wayne was a 10% partner… and he worried when Jobs took out a $15,000 loan for a purchase order because partners had to personally guarantee debt. Wayne didn’t like this setup.

You know where this is going.

Letting his fear guide his actions obviously cost him dearly. His 10% stake in Apple would be worth nearly $300 billion now.

Even worse, Wayne sold the original contract he and the Steve’s signed for $500. It was later auctioned for $1.6 million.

To be clear, I’m not bashing him. On the contrary, we can learn a lot from his experience…

Don’t Fall for the Trap

Recession. Inflation. War. Political tensions. Gas prices. And so on.

It’s easy to fall into the trap of anxiety and simply sell everything in an environment like this. We’ve seen the truth of that in the volatility in the markets so far this year.

And it’s in times like these that the lesson of Ronald Wayne becomes particularly relevant.

See, investors have many chances to lose. But we also have rare power – we choose when we lose. Paper losses are only realized once we choose to sell.

Many times, the most hurtful losses are the ones when we sell too soon for the wrong reasons – like panicking over bad news headlines.

Of course, sometimes the safe play is prudent. Yet often, it’s wise to accept the uncertainty and move against the crowd rushing for the exits.

And I think now is one of the latter times.

Let me show you why…

Where the Money Flows

As my regular readers know, I’ve worked for nearly a decade and a half on Wall Street.

And after finally saying goodbye, I built an advanced computer system to help me read the markets and spot where money is flowing.

It parses huge amounts of data to give me a clear look at where stocks and sectors are going.

So using my analytics, let’s examine the market’s current movements and plan without any costly, impulsive decisions.

To help us do so, we’ll use my Big Money Index (BMI), which tracks institutional investor activity. When there’s more buying than selling, the BMI turns upward, and vice versa.

And as the chart below shows, it has been on the rise.

In fact, it has hit levels not seen since growth stocks began to slide last November. Take a look: 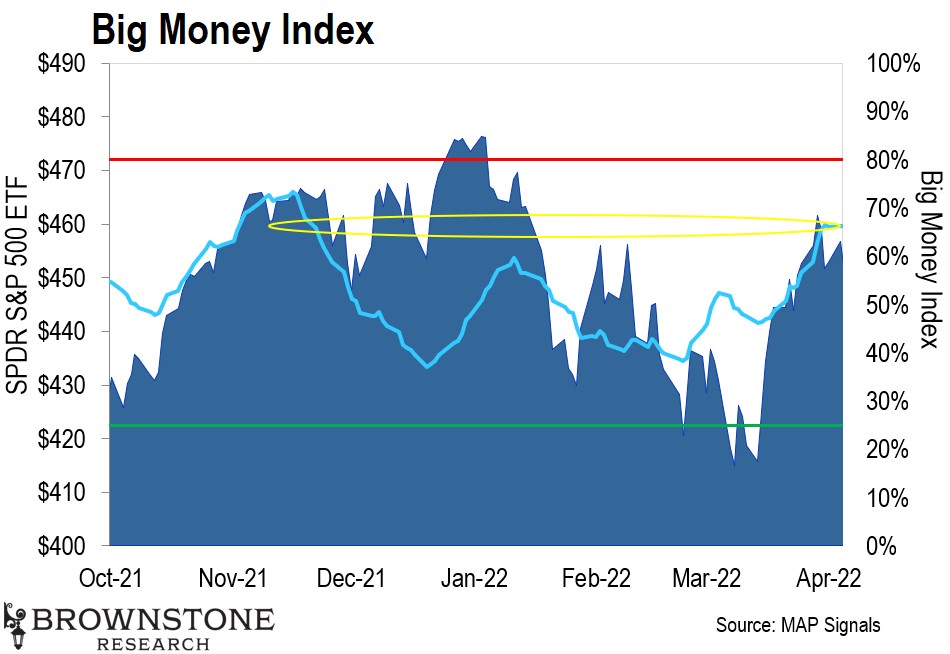 Despite the fluctuations we’ve seen in the S&P 500, institutional selling has dried up, and we’ve been on a fairly steady uptrend since March 15.

We can get a more nuanced view when looking at individual stock buy and sell signals.

Below, we see some recent selling. But it’s small compared to the big spikes of selling in months past: 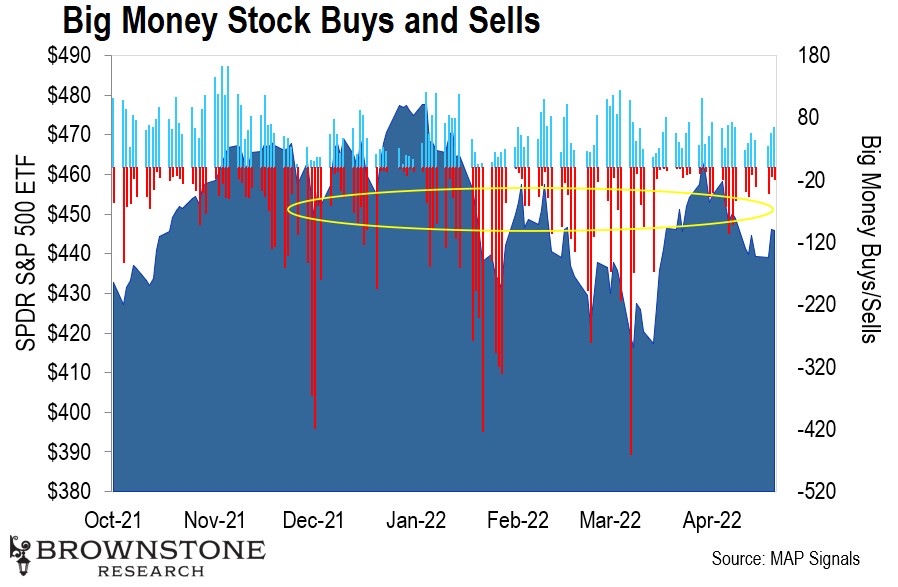 Breaking It Down by Sector

The bull markets currently driving the S&P 500 are in defensive areas, whereas sectors we often associate with growth are stuck.

This is reflected when we look at the average scores of the 6,500 stocks my system analyzes every day.

Here’s a distribution of strengths and weaknesses: 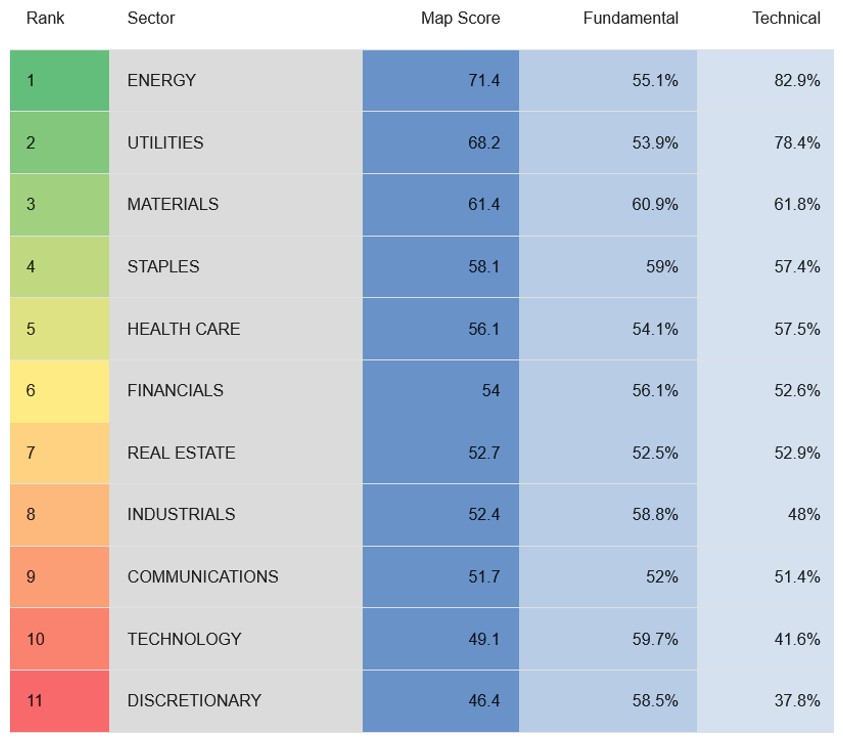 These sector scores are the averages of all stocks within a designated S&P 500 sector index.

The fundamental column represents the strength of a sector based on metrics like earnings, profits, and debt levels.

The technicals column represents the strength of the recent price action. In both cases, a higher number reflects greater strength.

And the Map Score is where my system combines those two numbers to create an overall rating.

As we can see, the technical scores in energy and utilities are sky-high right now. And their respective fundamental scores are relatively strong too.

But other sectors are even stronger fundamentally – materials, technology, and staples, to name a few.

That means there’s structural strength in the market. Despite the dour economic outlook from some quarters, stocks are still making money and posting profits.

And here’s something I really like: fundamentals are strong in technology and discretionary, which are typically growth-oriented sectors.

So while these sectors have suffered due to the recent inflation and recession fears, there’s nothing inherently wrong with them. And in time, we can expect to see a rotation back into these areas.

The Power of Superior Stocks

So in the face of all the fears out there, I’m bullish.

The market will rise again eventually. In fact, I’m invested in this exact thesis. Throughout this entire sell-off, my personal accounts have been shredded.

But I haven’t sold a single share, and I’m long on some of the tech names being left for dead.

That’s because I believe in the power of fundamentally superior stocks over the long haul.

To illustrate my point, I looked for the 50 most frequently bought stocks on my system’s “Top 20” report from 2019 to 2020. Using those stocks, I built a model portfolio.

These were the returns: 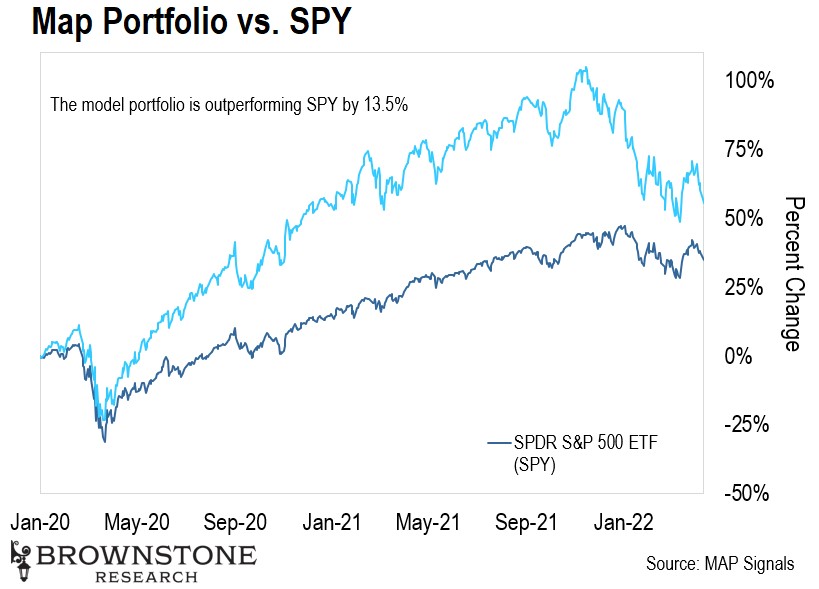 Even after the big dip that started last fall, the model portfolio is outperforming the SPDR S&P 500 ETF Trust (SPY) by about 13.5%.

This shows how basing our investment decisions on data is much stronger than ones made because of fear.

It reminds me of the quote, “Never make permanent decisions on temporary feelings.”

In the end, investors would be wise to always heed these words.

P.S. My proprietary system gives me an inside look at where markets are moving. And I use this data to help my readers find the stocks that are primed to succeed over the long term.

If you’d like to learn more about how my Outlier Investor research service works, then I’d love for you to check out this presentation here. It shows the real power of using data to find the “outlier” stocks that outperform the rest.