I wrote about the Inspiration 4z mission back in February of this year, when SpaceX announced that it would be supporting the first-ever all-civilian orbital mission. The original target was to launch the mission at the end of this year or in early 2022.

I’m excited to say that the mission is scheduled to launch this evening – months ahead of schedule. The launch window opens up at 8:02 p.m. ET for five hours. Hopefully, by the time we wake up Thursday morning, the four civilian crew members will all be safely in Earth’s orbit.

As a reminder, the mission is being sponsored by a wealthy businessman, Jared Isaacman, who is the CEO of a digital payments company called Shift4 Payments. Isaacman bought out the whole mission and will be one of the four civilians going to space and spending several days in Earth’s orbit.

Here’s a picture taken by a friend of the reused SpaceX Falcon 9 rocket with the Crew Dragon spacecraft on the top. This is at NASA’s Kennedy Space Center on Launch Complex 39A. 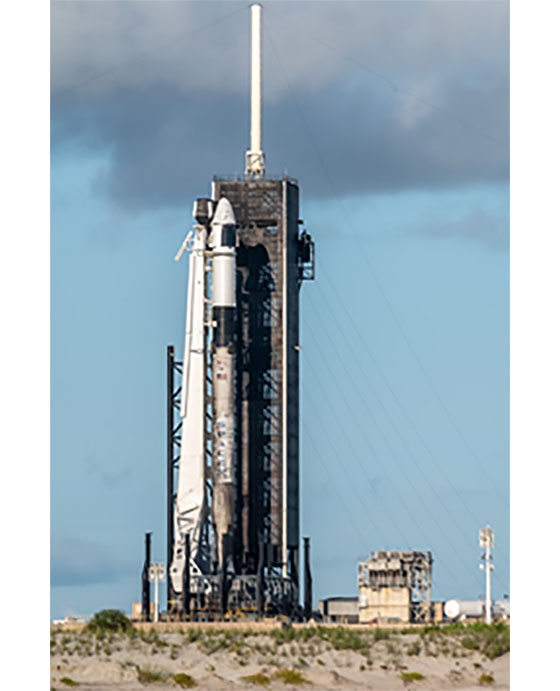 We can see the black char on the side of the Falcon 9 booster from its last use. SpaceX has pioneered the process of making boosters reusable in the aerospace industry, dramatically reducing launch costs as a result. No other company, or government, has come close to accomplishing what SpaceX has done in the last few years.

In fact, the Inspiration 4 mission would not have been possible without these developments. SpaceX has single-handedly put private spaceflight within reach for normal civilians.

And the team at SpaceX can control the entire mission from Earth. Approximately three days later, the Crew Dragon capsule and its civilian passengers will splashdown somewhere off the coast of Florida for what I hope will be a historic moment.

And this is only the beginning…

It doesn’t take much imagination to envision a company like SpaceX using smaller rockets to launch hypersonic spacecraft above the Kármán line (100 kilometers in altitude), enabling a flight from New York to Tokyo in just 30 minutes.

Not only is that possible… It’s going to happen, and we’re going to be alive to see it. And we’ll hopefully be able to enjoy it as well.

But first thing’s first. Let’s wish the Inspiration 4 crew a safe trip to orbit and return to Earth. By Saturday or Sunday, we can expect they’ll be back on Earth celebrating the trip of a lifetime.

Robotaxis are set to go global in 15 months…

We are going to start today by checking in on the $4 billion joint venture between automotive tech company Aptiv and South Korean conglomerate Hyundai. The joint company is called Motional.

As a reminder, Aptiv and Hyundai partnered up to launch an autonomous ride-hailing service. That’s how Motional was formed. And the company has been testing its robotaxis in partnership with Lyft for close to a year now.

And those tests must have gone very well. Motional just announced that its robotaxi program will expand globally through the Lyft app starting in 2023. That’s just 15 months away.

What’s more, the joint venture company just revealed its Ioniq 5 electric SUV. This is the vehicle that the robotaxi service will go live with:

What I like about this is that Motional is not trying to be all things to all people. As we can see from this image, it hasn’t tried to hide or skimp on the sensors. That likely reduces the car’s aesthetic appeal for many people, but Motional is not going after the consumer market.

Instead, Motional designed the Ioniq SUV exclusively as a robotaxi. It’s not for retail sale. Therefore the look simply doesn’t matter that much. What matters is how functional and safe the car is. And that’s why Motional went heavy on the self-driving sensors.

This is something of a break in the industry. The trend has been toward reducing sensors – both to increase visual appeal and to reduce the cost of production.

However, Motional doesn’t have to worry as much about the cost of production because it’s not competing in the consumer market. The Ioniq will generate revenue by participating in autonomous ride-hailing services. That’s its only function.

And we should note that Motional has been testing its robotaxis in Boston, Las Vegas, Los Angeles, Pittsburgh, and Singapore. These cars are on the road in these cities as we speak. And by 2023, Motional will formally launch these robotaxis over a much wider range of geographic areas.

So Motional is a company that we will be keeping a close eye on going forward. I expect progress will happen quickly and, depending on where you live, you might have access to these cars through Lyft much sooner than you might think.

I’m excited to see how quickly these Ioniq autonomous SUVs are rolled out across the country.

This is just one more proof point that self-driving cars are not five or 10 years away, as many analysts and industry “experts” have predicted. On the contrary, they are already here. And that’s only going to become more evident over the next 18 months.

Exponential growth in the blockchain industry…

MetaMask is a noncustodial digital wallet that works with the Ethereum blockchain. The term noncustodial means that MetaMask does not take control of a user’s private keys. As a result, it has no control over the funds held in the wallet. This gives users 100% control over their digital assets.

Now, in the scope of global adoption, MetaMask hitting 10 million users isn’t terribly impressive. After all, top social media platforms like Facebook have billions of monthly users. But what jumps out here is how fast MetaMask grew to hit that 10 million-user milestone.

If we go back to October of last year, MetaMask had fewer than 550,000 monthly users. That means its user base has exploded over the last 12 months. In percentage terms, the user base has grown 18,000% in that time.

And there have been two key drivers behind this extraordinary growth. They are decentralized finance (DeFi) applications and support for non-fungible tokens (NFTs).

On the DeFi front, MetaMask is a great place to securely store crypto assets that are key to the decentralized finance ecosystem. Because it’s a noncustodial wallet, MetaMask is largely impervious to hackers and cyberattacks.

As for NFT support, that should jump out at regular readers instantly. We have been chronicling the massive rise of NFTs – digital collectibles – in these pages, and the trend is showing no signs of slowing. (To learn more about how to invest in this trend, simply go right here.)

For its part, MetaMask enabled a “collectibles” section within its wallet. This gives consumers a single secure location where they can store all of their NFTs. That’s important.

After all, a key part of the NFT value proposition is exclusivity. Asset holders need to have a way to privately store their NFTs. And that’s driven much of MetaMask’s explosive growth this year.

So this is a very exciting development in the space. And I’m confident the growth is just getting started. MetaMask will ultimately cater to hundreds of millions of users as the DeFi and NFT trends continue to power ahead.

And for readers who are interested in becoming more involved in the digital asset space, I highly recommend checking out the MetaMask wallet.

Nuro is on the move…

As a reminder, Nuro is the company behind the R2 delivery vehicle. It was designed specifically for delivering groceries and smaller packages to consumers. And it has been so successful that Nuro entered into a multiyear partnership with FedEx back in the summer.

So these R2 delivery vehicles are on the road right now. FedEx is using them for what it calls “last-mile” delivery.

That means FedEx will still transport its packages on a big delivery truck. But instead of a person going door to door, the truck will stop at a central point in the neighborhood. Then the back of the truck will open, and five or six R2s will roll out of it – each loaded with packages.

And this is just the beginning for Nuro…

The company raised an impressive $500 million in its Series C venture capital raise back in March. It’s just now starting to put that money to work.

In fact, Nuro just announced that it will invest $40 million to create a new autonomous test facility. It will take over 74 acres of the Las Vegas Motor Speedway.

The plan is to construct a 125,000-square-foot facility as well as outdoor driving areas. It will be used to build out Nuro’s third generation of delivery vehicles. Presumably, this vehicle will be called the R3.

Nuro is also repurposing a portion of the track into a closed-course testing facility for its vehicles. This will create an isolated real-world testing environment to help optimize future designs. In turn, this will accelerate the deployment and adoption of Nuro’s delivery vehicles.

Nuro already has partnerships with FedEx, Kroger, CVS Pharmacy, Walmart, Chipotle, and Domino’s Pizza in place. And we can expect that list to grow as work on the third-generation vehicle picks up.

Again, this is another indication that autonomous vehicles are much closer to becoming a part of our daily lives than most people realize. And there will be some tremendous investment opportunities as the space matures.

P.S. Don’t forget about my confidential briefing next week. It’s happening on Wednesday, September 22, at 8:00 p.m. ET. And our topic that night will be the big news hidden within Apple’s latest launch.

While the media will fixate upon the glitz and glamour that surround all of Apple’s launches, my focus is much deeper. In fact, my research indicates that this launch will unlock a massive $12.3 trillion profit opportunity… for those who know where to look for it.

I can’t give away any additional details in these pages, but please tune in next week for the full scoop. Again, I’ll go live at 8:00 p.m. ET sharp on September 22. Readers can register right here to reserve their spot.