Ripple and MoneyGram team up to slay Western Union…

Ripple, for readers who don’t know, is a company that specializes in transferring and settling money over a blockchain network. It also created a digital currency (XRP) to run over its network.

Per the deal, Ripple will invest $30 million in MGI at $4.10 per share. Get this… MGI closed at $1.45 on Monday, right before this deal was announced. That means Ripple paid a 183% premium for the stock.

In return, MoneyGram will implement Ripple’s xRapid platform for transactions. And it will use Ripple’s digital currency (XRP) to send money across borders.

Fees are high because it takes days for the actual foreign exchange transfers to take place, but MoneyGram pays out customers as early as 10 minutes after the transfer. Which means that MoneyGram needs to charge extra to account for possible volatility in the foreign exchange rates.

With Ripple’s technology, MoneyGram said its fee will drop to “fractions of a penny.” And the money will get where it is going in seconds.

It is amazing to me that it has taken this long for technology to reach the money transfer business. MoneyGram was founded in 1940… and has followed largely the same business model ever since.

But that’s about to change. With Ripple, MoneyGram can eradicate fees… speed up transfers… and boost its own profit margin in the process.

And make no mistake about it. This is a shot at its top competitor, Western Union.

Western Union has four times more revenue than MoneyGram today. But that will change quickly with Ripple in the picture. MoneyGram will become 99% cheaper and faster overnight.

That will force Western Union to embrace blockchain technology as well… or close its doors.

And it won’t just be Western Union; every institution that needs to transfer funds will move toward blockchain-based methods. The cost savings and instant settlement are simply too compelling.

News is out that Apple will release two new 5G iPhones in the second half of 2020 – probably in September. This confirms what I’ve said before about Apple being last to the 5G scene.

That was also the case with 4G. Apple likes to wait for the networks to be built out across most major markets before launching a new product with new wireless technology.

So consumers who want 5G this year will have to use an Android product. Samsung and LG both have 5G Android phones hitting the market right now. For those of us who are iPhone users, we have to wait until next year.

But the fact that Apple has confirmed 5G iPhones tells us that we are entering the mass consumption window.

Over the next 24 months, consumers will be migrating to 5G phones. And remember, 4G phones will not work on 5G networks. So we’re talking about the entire market.

And that spells big gains for investors well-positioned in 5G stocks.

(I’ve been preparing readers of my large-cap tech investing service, The Near Future Report, for the rollout of 5G phones all year. If any Near Future readers missed my investment recommendations on this theme, go here. And if you’re not a subscriber, consider joining us right here.)

The last step to the perfect robot…

Robots have made big strides this year, as we have covered in these pages recently. They can pick tomatoes, deliver packages, and even sew.

Yet there is still one pain point that needs to be solved to make the “perfect” robot. Robots haven’t been able to “feel” objects. In other words, they haven’t had sensory input to give them information about the object they are dealing with.

Is the object hard or soft? Rough or slippery? Rigid or flexible? It is impossible to know without sensory input – without “feeling.”

But the answer to these questions is crucial. Sensory input determines how much force to exert when grabbing an object. Too much force, and the object will break or bend. To little force, and it will slip and fall.

This is where the biggest gains in robotics will come this year.

In fact, MIT just developed a new robotic arm that can feel objects. It does this with a rubber membrane that mimics sensory input from fingers. 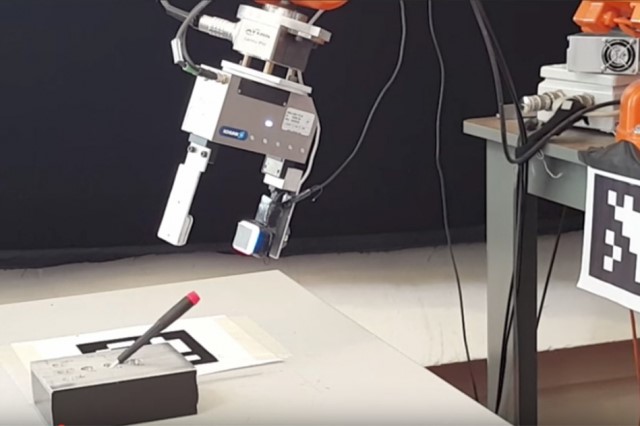 Feeding this sensory input into a deep learning network allows the robot to tell the difference between hard and soft… rough and slippery… rigid and flexible. With this information, the robot can figure out how much pressure to use when grabbing an object.

Imagine a robot picking blueberries. Or washing delicate and slippery glassware. Robots need to “feel” these things in order to know how to handle them.

This is the last step toward a robot being able to do just about anything a human can. To be able to “see” with computer vision… identify people and things… pick up objects of random shapes and sizes without breaking them… sort them… and ultimately move them where they need to go. These types of fine motor skills are some of the most difficult problems to solve in robotics.

And because robots can work 24/7, there are so many applications for them: agriculture… industrial work… even tasks like dishwashing in the hospitality industry. Robots will do it all once they can move and manipulate objects as well as humans can.