The energy and energy storage industries are deeply interesting to me. They are also an intense area of frustration for me.

The world has the technology to affect a rapid shift towards clean and limitless energy, but it hasn’t made the change.

The ridiculous show that the 2021 United Nations Climate Change Conference – COP26 – is putting on right now in Glasgow is a stark reminder of the lack of concrete action that has been taken to address such a critically important issue.

I’ve seen more press coverage on the irony of all the private jets and the U.S. president’s record-setting motorcade of internal combustion engine vehicles than I have seen anything of substance.

And it appears that the most popular way to virtue signal is by talking about the urgent necessity to convert all vehicles to electric vehicles. Yet if we’re filling our electric vehicles with electricity produced by dirty carbon, what’s the point?

Of course, this would be great for those companies that manufacture electric vehicles, as well as for battery manufacturers. But it won’t do much for the environment. After all, the most critical problem to solve is where the electricity comes from. How is it produced? That’s what I’m most interested in.

Bill Gates himself has been a big fan of next-generation nuclear fission technology, which is far safer than anything that has been deployed before. But this comes with the illogical political narrative of being “dirty.” Thorium reactors, which also show great promise, sit in the same camp as well.

As I was catching up this weekend on the spectacle, it reminded me to check in on the U.S. Energy Information Administration (EIA) to see what has happened with U.S. electric power generation in 2021.

I was surprised about what I found… I think you will be too.

Put simply, this is a terrible development – one that is in exactly the wrong direction. Of all carbon-based fuels, coal emits the most carbon dioxide per unit of energy.

The current U.S. policies to say “no” to gas pipelines and “no” to the drilling of natural gas have resulted in natural gas prices rocketing more than 110% this year. This has resulted in power generation companies to migrate part of the power production to lower costs of energy inputs like coal.

While natural gas isn’t perfect, and I’d prefer something 100% renewable, I’d choose natural gas over coal any day. It is far cleaner to burn.

And until we figure out how to produce enough clean energy to fuel our baseload power requirements, we are going to need carbon-based power sources for years to come.

I can’t help but think about how much opportunity has been wasted this year. Trillions of dollars have been printed as stimulus money, devaluing the dollar, and causing systemic inflation that has a negative impact on everyone… And it’s all based on terrible policy decisions that were not based on scientific research as a response to the pandemic.

Sadly, none of them worked either. More people have died with COVID-19 in 2021 than in 2020, and as we know, nothing stopped the spread of the aerosolized virus.

What if… just what if… a small portion of those trillions of dollars of stimulus would have been invested in breakthrough energy technologies like nuclear fusion (the power of the sun), some forms of which do not create any radioactive waste? 100% clean, emission-free, radioactive-waste free, limitless power. These reactions produce more energy than what is required to maintain them.

That sounds like a much better way to build a clean energy infrastructure than burning more coal.

The latest big-ticket release of NFTs has hit, and it’s signaling a project that is far from complete.

NFTs are digital assets that are cryptographically secured and authenticated on a blockchain. It is a topic I’ve been covering regularly at Brownstone Research. A popular use for these NFTs is in the form of digital art.

That is where “Mekas” come in.

Mekas were designed by two European designers who came up with the idea during a multi-month trip to Asia. It is why you can see some similarities between the Mekas and Japanese anime.

Here’s one of the Mekas in the collection.

Each one has various Japanese-inspired items like a hat or samurai sword. And they appear in a mix of colors and designs. No two are the same.

In total, 8,888 Mekas were created. The number was not random. In Japan, the number eight is considered very lucky. Eight turned on its side can look like infinity, which represents prosperity and longevity.

The collection had a lot of hype ahead of time and required users to enter a lottery system to be eligible for minting. Users registered 172,000 wallets via Twitter and Discord. And the winners were able to mint a Meka for 0.2 ether (ETH), or roughly $700 (plus the cost of the transaction).

Immediately following the mint, the floor price for Mekas jumped to more than 6 ETH, which was a bit more than $20,000 at the time. And now, we are witnessing some Mekas fetching six-figure amounts. From the standpoint of sales volume, Mekas were a massive success.

The NFT digital art collection is currently within the top 10 of all-time sales volume for Ethereum-based NFTs at $145 million.

And as crazy as it seems, the artwork hooks users with a potential “MekaVerse.” The name is a play on the metaverse. As we’ve recently written, the metaverse is a shared virtual land you can enter and interact with others.

We’re going to be able to interact with each other, work, play, entertain, and game inside of metaverses in the very near future. And even if this might not seem interesting to us, as investors this is definitely a trend that we want to be well-informed about.

With the MekaVerse, the project hints at users bringing their Mekas into the metaverse. It will be a new way to project wealth and status. We’ve gotten a glimpse of that with celebrities displaying NFTs on their Twitter avatars.

The team also expects to release more NFTs later. These NFTs can equip a Meka with new traits or items.

This is a very interesting project to watch evolve over the coming months. With such intense interest and large sales figures attached to the project, we can be sure the NFT community will have a lot of excitement around future developments.

And to make sure you don’t miss any of my research on the NFT space, you can go right here to watch my recent presentation.

A virtual reality headset you can travel with…

The gaming headset is not like most we see. Typically, when we imagine gaming devices like this, the headsets are huge and require a mess of wires plugged into your PC.

The Vive Flow, on the other hand, is not as bulky as others in the market, and it looks more like a pair of ski goggles than a VR headset. 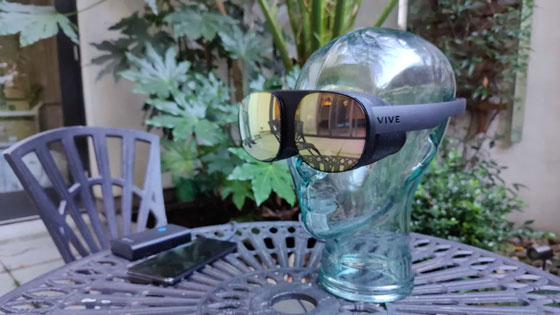 To help keep the design simple, the headset connects with a smartphone. This allows the headset to use the computational power from the phone, rather than having a larger headset to support all of the extra semiconductors that would be required.

It is also lightweight, as there is no battery in the headset. This does mean it needs to be plugged in.

While this might seem odd for a “portable” device, users wouldn’t be walking around town as they wear these. This is virtual reality, not augmented reality. Therefore, there is no visibility of the natural surroundings. Users would likely be seated and near an outlet when using this headset.

Another important aspect here is that these goggles are not for high-power VR gaming. That still requires a full VR headset plugged into a powerful computer. This was an important design decision in order to keep the Vive Flow headset light and portable.

And HTC’s thesis here is there will be market demand for a lighter-weight VR headset, one that comes in at less than 200 grams. Our typical sunglasses weigh around 50-75 grams.

I am curious to see how this thesis works out in the consumer market. It has a good price point at $500.

There are several applications like meditation apps or simple games that may be well-received with a comfortable headset like this. So there may be a large segment of the consumer electronics market that finds this kind of VR enjoyable and a nice escape from the real word.

Some readers may recognize the name. Foxconn is Apple’s largest contract manufacturer. It also makes a range of products like laptops, rice cookers, e-readers, gaming consoles, and other electronics. The company has enjoyed great success, as seen by its nearly $100 billion market cap.

Now Foxconn is looking to compete with automotive manufacturers with its release of SUV, bus, and sedan electric vehicles.

These are not small cars or niche products. These are popular vehicles we see on roads each day. 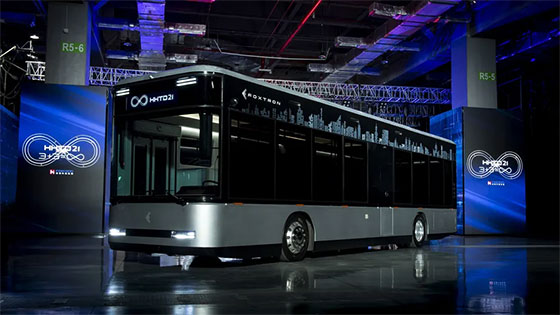 What is interesting here is the obvious – Foxconn is not an automotive company.

It has never manufactured internal combustion vehicles or engines. And what this announcement shows is how similar an EV is to our computing devices. They all have semiconductors, circuitry, and batteries in them.

Without the complexities and expertise to work with internal combustion engines and so many more moving parts, Foxconn is in a unique position to become a serious player in the EV race.

And the timing of its announcement is no coincidence…

Last month, Foxconn acquired a factory in the U.S. formerly owned by Lordstown Motors. The startup ran out of cash, and Foxconn stepped in. And it is now planning to build EVs for two U.S.-based automotive companies.

It is a major strategic move for a company like Foxconn and will bring in a wave of new revenue.

And what is clear here is that the auto industry is not moving fast enough. It is years behind the great work Tesla is doing. A new entrant like this makes the incumbent carmakers’ lack of innovation even more noticeable.

And with Apple being Foxconn’s No. 1 manufacturer for its consumer products, I can’t help but wonder… Is there a bigger play here? I think there might be. Go here now for the details.

P.S. If you’ve ever wanted to invest in private companies, you won’t want to miss this announcement.

As I shared in Friday’s mailbag, I’m finally ready to help my readers make investments on “day one” – when we can achieve the highest gains. I know this personally. I’ve invested in more than 250 private deals, some of which have achieved returns in the thousands of percent.

That’s why I’ll be hosting my Day One Summit on November 17 at 8 p.m. ET. There, I’ll share why I’m finally making this move now and how anyone can get started.

This opportunity is open to anyone, not just accredited investors.

So please go right here and RSVP to attend this event. This is how to achieve truly transformational wealth. And I know that this will be the start of great things to come for those who tune in.