Note From Jeff Brown: In The Bleeding Edge, we focus on the latest developments in technology. But today, we’re bringing some insights from a new voice on a topic many readers have expressed interest in… cryptocurrencies. Especially as bitcoin has hit new highs – crossing the $48,000 threshold just this week – this space has been drawing more and more attention from investors.

Below, Jason Bodner, an expert financial analyst, shares his own unique perspective on how investors can gain exposure to this trend… all without owning a single unit of crypto.

Jason originally honed his skills on Wall Street, where he routinely traded more than $1 billion worth of stock for his clients… often in one day. But more importantly, his time there gave him a keen eye for how to spot what he calls outlier investment opportunities… including his take on crypto. He even crafted his own proprietary stock-picking system, which he uses to help investors outperform the markets.

I’ve followed Jason’s work for the last three years, and I’ve peeked under the hood. I’ve been very impressed. He shares my mission to “level the playing field” for regular investors. He also knows how retail investors are often kept from the best opportunities to profit… and he’s determined to balance the scales.

Everyone makes mistakes. But what you learn from your mistakes is what counts most.

Some are bigger than others, of course. For instance, take this doozy from Warren Buffett…

In 1993, Buffett bought Dexter Shoes. He thought he saw a competitive advantage that wasn’t going anywhere… But Dexter was worthless just eight years later. It cost shareholders $3.5 billion, and Buffett later admitted it was the worst deal he’s ever made.

Can you imagine making a $3.5 billion mistake?

If you ask any crypto enthusiast, I may have made a Buffett-sized mistake by not buying bitcoin. Bulls have predicted that a single bitcoin could one day be worth as much as a million dollars. By that logic, I’d be missing out huge by not taking a position in bitcoin, even now…

But I’m learning from my previous bitcoin mistake (more on that below).

And thankfully, I’ve discovered how to catch a ride on the crypto boat without needing to buy any cryptocurrency whatsoever…

Stocks have always been my favorite investment. They’re what built my fortune and what continues to build my subscribers’ wealth. I understand them inside and out.

And the results speak for themselves. As of this writing, my subscribers enjoy an open win rate of 91% and an average unrealized gain of 126%, all on stock holdings. That beats the market handily over the past three years since I started recommending these stocks to a small group of people.

All that said, even I couldn’t resist the crypto mania of 2017. I took two tiny positions in bitcoin and Litecoin – altogether only $100 – just to see how it worked. Of course, I bought near the top… and I soon watched my positions crater 90% into the crypto winter.

Fast forward to today, and crypto once again looks moon-bound. Bitcoin recently traded as high as $48,000 on news that Tesla bought $1.5 billion worth.

My wife even said to me, “You still think it’s worthless? Elon Musk apparently doesn’t! You still don’t want to invest in it?”

I told her then what I’ll tell you right now…

I don’t like to invest in what I don’t understand. If you do, you aren’t investing. You’re speculating. When I speculate, I wager small amounts – like my $100 crypto investment.

But when I understand something, that’s a different story.

If I know a company has huge sales and earnings growth and big-time profits… and if I have reason to believe it’s fetching support from the biggest institutions on Wall Street… the odds of success are measurable.

And not only measurable – I can tilt them in my favor.

Because of this, my 2017 position in bitcoin wasn’t really an investment. It helped me realize that until bitcoin had widespread adoption and corporate support, it would just whip around wildly because no one really knows what it’s worth.

Of course, things are different today…

But as it turns out, you can get exposure to crypto by simply buying some of the best stocks in the market. And you know they’re great because the big institutions are buying them with both hands…

The Power of Big Money

As I’ve shown you before, the core of my investment strategy is all about finding where the biggest institutions and hedge funds of Wall Street – what I call the big money – are placing their bets. I spent 20 years and hundreds of thousands of dollars building a system that does just that.

Thanks to this system, I don’t need to pay nearly $50,000 per bitcoin to profit.

Instead, the big money points me to the best stocks that take advantage of this huge trend while still running profitable businesses.

And my research right now shows that digital payment companies – think PayPal – are the best stocks to own to profit from the cryptocurrency space.

Digital payments are already massive and will continue to be in the future. But now an undeniable catalyst is drawing even more attention to the space from enterprising investors.

These companies are forging ahead with secure, digital payments for our increasingly online world. All the while, cash’s popularity is falling off a cliff.

A simple example illustrates this…

Back in October, PayPal announced that it would allow users to hold bitcoin, ether, Bitcoin Cash and Litecoin in their accounts. Just a month later, a survey showed 17% of PayPal’s customers were already using the service to buy or sell cryptocurrency.

PayPal has more than 300 million users. 17% of that suggests 51 million PayPal users have started holding some cryptocurrency.

PayPal’s massive network also enables potentially much wider adoption of crypto. And to top it all off, PayPal takes a cut of every transaction. That’s good for its business.

But here’s the thing…

Big money has known PayPal had this potential for a long time. Check out the chart below… 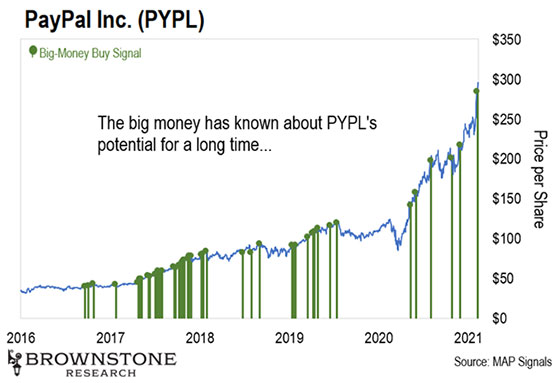 Each green bar shows when my system flagged unusually large buy volume in PayPal stock. This indicator is what tells me the big money is pouring in and that I should get behind them. Since my system first flagged PayPal in 2016, the stock is up 616%.

And that’s far from the only example. Just look at Square…

Square makes credit card-reading hardware for small businesses. And similar to PayPal, it takes a small cut of each transaction that takes place on its services.

Last year, Square itself said it bought 4,709 bitcoins, paying a total of $50 million. It already allowed its customers to transact in bitcoin via its Cash App.

And big money knew about Square long ago, too… 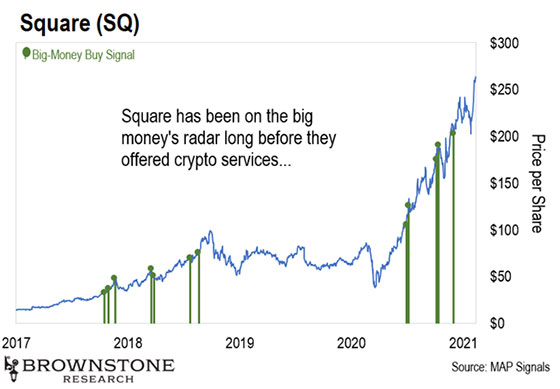 Big money was buying shares of SQ all the way back in 2017. Since my system first flagged it, the stock is up 714%.

(Full disclosure: I own shares of TSLA, PYPL, and SQ, but I don’t recommend buying them today at their current prices.)

Seeing PayPal and Square embrace cryptocurrency is huge. Both are immensely successful companies with big profits. And they illustrate the power of following the big money buying…

As I said at the beginning, there’s more than one way to get exposure to the growing crypto trend. I do it by owning well-run companies, backed by big money, that have taken the plunge into crypto for me.

Tesla, PayPal, and Square are just three examples of successful companies doing this right now. But in a broader sense, they are pushing digital payments forward and ensuring their importance in the future.

I expect many more companies to follow. And I will always be on the lookout for opportunities like this in outlier stocks with phenomenal businesses.

And if you don’t want to miss the boat of the digital payments revolution but aren’t comfortable buying crypto itself, you might consider following in my footsteps and looking at alternative ways to gain exposure to this trend.

One option is an ETF like the ETFMG Prime Mobile Payments ETF (IPAY). It offers broad exposure to companies specializing in the digital payments landscape and will likely do well as this megatrend continues to take shape.