On May 12, Elon Musk sent a tweet that shocked the crypto markets… 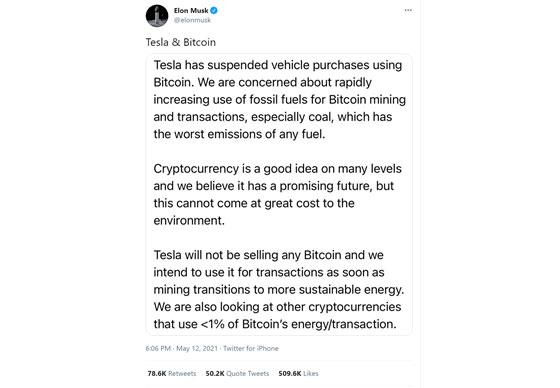 What followed was a crypto reckoning. Bitcoin and many other cryptocurrencies took a wicked tumble. Bitcoin fell 50% from its highs, and more than $1 trillion in wealth was wiped from the market in a week.

Here’s the strange part, though…

This came just months after Musk all but assured a bright crypto future for his business. Tesla, Musk’s electric vehicle company, disclosed a $1.5 billion allocation to bitcoin on the company’s balance sheet. But perhaps even more important, he also said Tesla would accept bitcoin as payment for their cars.

Well that was like gas on a fire for bitcoin’s price. From that announcement, bitcoin rocketed 71% higher to a peak price of nearly $65,000. Tesla’s initial $1.5 billion stake was suddenly worth over $2.5 billion. Pretty convenient!

But then came this tweet. And Bitcoin, which had already weakened, fell all the way back down to where TSLA first bought it… Then even lower.

So, you might look at this and ask – why on earth would Musk deliberately jeopardize his own company’s balance sheet?

Yes, bitcoin uses quite a bit of energy. And the debate over that energy use has picked up in recent months.

But is this really enough for Musk to suddenly flip-flop on bitcoin… And purposely tank his own holdings?

I just don’t think so.

I think there’s something bigger going on that few people are talking about. In my view, it could point to an investment trend that’s just getting started… And has a huge long-term runway.

The best part is, you don’t need crypto know-how to profit from this trend… The companies powering it trade on the stock market.

In today’s essay, I’ll share what this exciting trend is, and why it could become a winning investment over the next 4-8 years.

But first, let’s answer the big question… Why did Elon really send that tweet?

Full disclosure: I’m a shareholder of TSLA in personal or managed accounts. Because of that, I have a pretty strong understanding of how their business works.

Regular readers know that I live my research life in data. It’s important for me to know where a company’s revenues come from, if they are growing, and if they are profitable.

Don’t get me wrong, here. I’m bullish on TSLA, just like Jeff Brown is.

But there’s a reason some smart people bet against the company. (Michael Burry of The Big Short fame, for example, is reportedly short about $530 million worth of TSLA.)

The truth is, the company has a heavy reliance on federal environmental tax credits to keep it in the green.

Because Tesla’s cars are electric, they exceed emissions and fuel economy standards by a wider margin than any traditional automaker. That earns Tesla lots of federal tax credits, as incentives for producing electric vehicles and solar roof tiles.

It earns these tax credits by selling its green-energy products. And because its products are so popular, it earns a lot of these credits and can then sell excess credits to other automakers who need them.

Tesla earned $518 million from selling those credits last quarter alone. And that’s up 46% from the same time last year.

It made up 7% of its overall revenues. That may not sound like much, but the credits alone make up more than 4 times that quarter’s net profit of $104 million. And Tesla projects it will earn $1 billion from these tax credits a year from now.

Clearly, these tax credits are important to Tesla’s bottom line. Much more important than, say, $1.5 billion worth of bitcoin. Without them, its quarterly earnings reports can’t and won’t look nearly as good.

Now, you’re probably wondering: What does this have to do with Musk’s recent about-face on bitcoin? Here’s my theory…

Unless you’re a die-hard bitcoin fan, you might think bitcoin is a waste of energy. That’s because mining bitcoin requires a lot of power.

Think of it this way: To mine bitcoin, miners use racks of graphics processing units (GPUs) to increase their overall computing power. The more they grind away, wired up to electrical sources, the more bitcoin they earn doing so.

That activity consumes an annualized 145 terawatt-hours of energy per year. For perspective, that’s equal to 0.65% of the world’s total energy consumption.

And, like most of our electricity, these miners are powered by coal-fired power plants and other fossil fuels.

With that in mind, isn’t it possible that Tesla’s involvement in bitcoin attracted criticism from the very government which grants Tesla its environmental tax credits?

If public perception is that Tesla supports fossil-fuel burning from bitcoin mining, that calls their green emissions into question.

Let’s be real, neither Tesla nor Musk will admit this. I can only speculate now, but picture this…

Let’s say Tesla and the feds came to some agreement…

Tesla can keep both its tax credits and its bitcoin holdings as long as it no longer accepts it as payment. Why? Because legitimizing bitcoin as acceptable currency, encourages further bitcoin mining. That means more energy consumption.

If you think of it that way, I believe that’s why Musk tweeted what he did.

While that’s not good news for bitcoin fans, it is great news for investors in another market opportunity: ESG companies.

With President Biden committed to getting the U.S. on track towards using mainly renewable energy, companies with a “green” edge are rocketing higher.

ESG stands for “environmental, social, and governance.” Basically, companies get scored on these three factors. The higher the score, the more environmentally friendly and sustainable a company is perceived.

ESG companies have been some of the hottest investments of the past year. Since the pandemic tanked stocks last year, the Vanguard ESG US Stock ETF (ESGV) – a basket of high-ranking ESG companies – has skyrocketed 90% higher.

But ESGs aren’t the only environmentally friendly companies getting a big boost right now. Renewable energy-focused companies have done even better.

The Invesco Solar ETF (TAN) is an ETF focused solely on solar and renewable energy (a good chunk of Tesla’s business). And it’s returned 247% since the pandemic bottom.

Now, if you’re not sold on my idea for why Tesla made its shocking move with bitcoin, consider this…

As of Thursday May 27, Tesla was added to one of the Vanguard ESG US Stock ETF (ESGV). This places it in investors’ portfolios alongside other ESG companies.

Clearly, it is in Tesla’s best interest to prove it meets ESG standards.

Look, no one can say for sure why Tesla decided to stop accepting bitcoin as payment. But to me, it makes sense that the reason is tied to the company’s ESG and renewable energy ambitions.

And that’s great news for renewable energy stocks and high-ranking ESG companies. Personally, I’m not yet sold on bitcoin, so I’m not really concerned with what this all means for it.

The reason is, I’ve spent my career diving deep into stocks and understanding them like the back of my hand.

So no matter where the crypto market goes next, or what Elon Musk tweets, my subscribers will take comfort in the fact they’re sitting in the best outlier companies out there. And many of them are set to take advantage of this trend.

P.S. As a matter of fact, one of the biggest renewable energy winners in the market is in the Outlier Investor portfolio. It’s up 346% since my recommendation.

I’m always on the hunt for other stocks in the space with similar potential. And the best part is, I use a proprietary stock-picking system that shows me where the best opportunities are.

I recently showed off this system with your editor Jeff Brown. Jeff was so impressed with what he saw, he invited me to join Brownstone Research.

Watch my presentation here, and learn how you can use my system to turbocharge your stock portfolio…