The nucleic acid testing (NAT) technologies that use polymerase chain reaction (PCR) tests have been getting some attention again. This is the most common kind of test used for detection of COVID-19.

And this caught my eye… The World Health Organization (WHO) published a notice on January 20 concerning the interpretation of PCR results, cautioning those who use PCR tests.

This is a surprise. The Centers for Disease Control (CDC), the Food and Drug Administration (FDA), and the broader medical community have incorrectly used the PCR tests as if they were a diagnostic tool that can provide a simple “positive” or “negative” as a result. Ironically, that’s not what the test was designed for.

The WHO’s announcement noted, “The cycle threshold (Ct) needed to detect virus is inversely proportional to the patient’s viral load.” This is accurate.

It went on to state, “As disease prevalence decreases, the risk of false positive increases.” Very true.

And it was surprisingly candid in stating, “Most PCR assays are indicated as an aid for diagnosis.” In other words, they’re not intended to provide definitive positive or negative diagnoses.

The cycle threshold setting is at the center of what I consider to be an epic scandal. It is why we have seen a very high percentage of false positives.

If the sensitivity is set too high, it can pick up fragments of a dead virus. In other words, it’s not something that causes symptoms or is infectious. In the U.S., cycle thresholds are set at 40. And in Europe they’re between 40 and 45.

Michael Mina, an epidemiologist at the Harvard T.H. Chan School of Public Health, offered his own insight into the very high sensitivity and corresponding low viral loads. He stated, “It’s really irresponsible, I think, to forgo the recognition that this is a quantitative issue.” He went on to say, “We’re using that for clinical diagnostics, for public health, for policy decision-making.”

Juliet Morrison, a virologist at the University of California-Riverside, believes that even setting the cycle threshold to 35 is too sensitive. She went on to say, “I’m shocked that people would think that 40 could represent a positive.”

And it’s not just them.

When interviewed on this topic, even Dr. Anthony Fauci stated, “If you perform the test at a cycle threshold of 35 or more, the chances of it being replication-confident [accurate] are miniscule. You almost never can culture the virus [detect a true positive result] from a 37 threshold cycle… even 36.”

What’s the right cycle threshold setting that would identify a live virus capable of spreading? Mina believes that number is 30 or less. Morrison says somewhere between 30 and 35.

Yet throughout this entire pandemic, the industry has been using 40. This has resulted in anywhere between 60% and 90% false positives.

This is why we have an epidemic of cases rather than people who are actually symptomatic and capable of spreading COVID-19. Cycle threshold settings of 40 will identify viral fragments from months ago.

In other words, you already had it but didn’t know it. It doesn’t mean you’re infectious, but you are testing positive.

The case numbers are almost meaningless as a result. And the mortality numbers, for the same exact reasons, are also grossly overstated.

It really makes me sick to my stomach thinking about all of the lives that have been destroyed due to the economic lockdowns and the lifelong harm to school-aged children caused by so many terrible policy decisions. And so many of these decisions are based on inaccurate data.

But I have a solution. I know a way to address the media-induced fear and panic around COVID-19 cases.

Simply set the cycle threshold to a scientifically proven setting of 30. That would identify viral loads with the possibility of replicating. That way, we can identify those who should quarantine and those who can live freely.

And we’d have a radically different and more accurate view of the pandemic that could shape solid policies meant to deal with its effects.

One of the biggest developments in the blockchain industry last year was something called decentralized finance. DeFi for short.

We can think of DeFi as blockchain technology’s answer to traditional finance. It is about providing liquidity to the digital asset space, matching buyers and sellers, offering borrowing and lending services, and enabling leverage and derivative instruments.

But there is one key difference.

No entity or group of entities has centralized control in the DeFi space. In other words, the companies building out this infrastructure have no control over the transactions that happen. That’s the “decentralized” part.

In this way, it is the exact opposite of Wall Street, where each firm has complete control over every financial transaction.

ShapeShift started out in 2014 as one of the single most valuable utilities in the blockchain industry. It was a beautiful service that allowed users to exchange one cryptocurrency for another nearly instantly.

It was a beautiful service that did not require anyone to provide personal information or set up an account. And this model made ShapeShift massively successful… at first.

That changed in 2018 when the Securities and Exchange Commission (SEC) got involved.

This destroyed the convenience of using ShapeShift. No longer could consumers show up, swap out one cryptocurrency for another, and go about their day. Now there was a timely process involved. And most of its customers stopped coming back because of it.

Some readers may wonder why having to create an account would be such a big deal. But it all has to do with the blockchain ethos.

Blockchain technology is designed to enable unfettered peer-to-peer commerce. In other words, consumers should not have to rely on a financial institution to custody their money and facilitate their transactions.

So when ShapeShift implemented KYC, it became no different than a legacy financial institution. And that’s the exact opposite of what its customers wanted.

Fortunately, the rise of DeFi will allow ShapeShift to return to its roots this year.

Going forward, ShapeShift will simply connect customers with decentralized digital asset exchanges. This will allow it to get out of centralized trading and ultimately drop the account and KYC requirements.

Except this time, ShapeShift won’t hold the cryptocurrencies itself. It will facilitate the customer’s desired transaction on a decentralized exchange. In a sense, it will be the “bridge” between customers and exchanges.

From the customer’s perspective, the process will work exactly like it did prior to 2018. The only difference is that ShapeShift will never touch the assets this time. That will make it exempt from KYC regulatory requirements.

To me, this is a major sign of things to come. The blockchain industry is gradually shifting away from centralized to decentralized applications.

So we’ll keep a close eye on the DeFi space this year. I expect to see some major developments as 2021 progresses.

The other product announcement that caught my eye at CES…

Today, we have to talk about a product announcement from Panasonic that also jumped out at me.

Panasonic is a company that has struggled in recent years to produce a consumer electronics hit for the mass market. I’m not sure if this one will get them over the hump, but I am excited about the advanced prototype of virtual reality (VR) glasses that the company just unveiled. 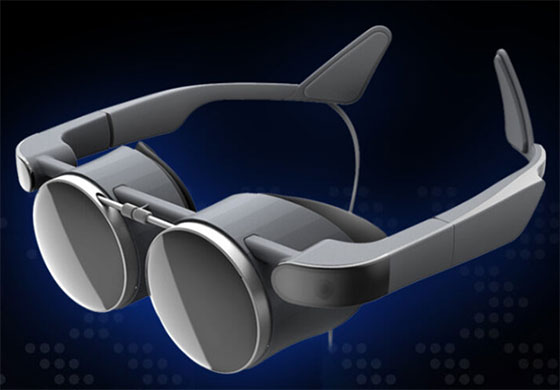 This is an interesting take on VR. Instead of the big bulky headset that we are accustomed to, these glasses have a sleek form factor.

Clearly, Panasonic envisions this as a portable form of VR. We can see the cable coming out of the back – that is what will tether the goggles to a device. That could be desktop computer, a laptop, or even a 5G-enabled smartphone. 5G will allow for VR on the go.

As for the specifics, the goggles use micro-OLED panels for each lens. They provide ultra-high-definition video quality. And we can see that there is a cup around each eye to block external light. These remind me of the old arctic sunglasses.

Finally, there are cameras embedded around the temples. That’s the small, faint circle we just barely make out in the image. These will be used for depth perception, safety, and potentially even for augmented reality applications. They’ll be perfect for alerting the wearer when he or she is about to walk into a wall or object. And they will also enable users to see in front of them when they need to.

I think this is a great design. And it matches the trend we are seeing with these consumer electronics headsets getting smaller and more portable.

So I’m excited to see where Panasonic goes with this. We’ll keep an eye out for more developments later this year.

It is time to do some research on UFOs…

We are going to wrap up today with unidentified flying objects (UFOs). This will be fun.

Tucked away in the COVID-19 omnibus bill was a provision that declassified all the Central Intelligence Agency’s (CIA) documents pertaining to UFOs.

That’s right. Thanks to the COVID-19 relief bill, we can now research UFOs all we want. How does that make sense?

Perhaps Congress thought we needed something to do now that we are spending more time at home. Or maybe that’s just how ridiculous the legislative process in Washington is.

Whatever the case, it turns out the CIA has a massive archive of information on UFOs. And a gentleman by the name of John Greenwald Jr. created a site called the Black Vault to make it easy for us to view these reports.

Apparently, Greenwald has been working on this since he was 15 years old. He has filed more than 10,000 Freedom of Information Act (FOIA) requests to obtain all these UFO documents for his site.

Greenwald said it was a royal pain to get the information. And he had to scan in each document by hand. The CIA provided the reports in a very outdated format.

What’s amazing here is that some of these reports go back to the 1980s. I haven’t had the time to go through any of them myself. But for those interested, there is a seemingly endless amount of documentation to dig through.

This declassification comes ahead of the U.S. government’s official UFO report, which will be released later this year. And of course, that has generated renewed interest in UFOs. This is a topic that even came up on the radio show I did with Glenn Beck last week.

I’m very intrigued to see what we can learn from all these old documents. For readers who are interested in digging in, there is now an incredible amount of endless information available to you.

And if any readers do decide to read through some of these UFO documents and find something interesting, I would love to hear about it. Please share your insights with me via email here.