Not to worry. Those aren’t my words… But they are the words of thousands of gainfully employed U.S. workers.

In fact, the number of people voluntarily quitting their jobs is now at a multi-decade high. 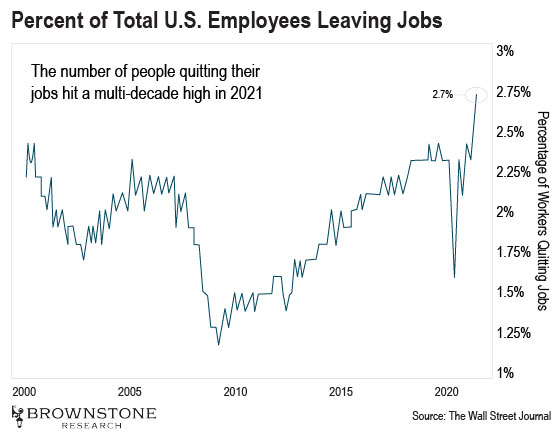 We might think that after more than a year of ridiculous economic lockdowns, restrictions, and meaningless demands placed upon us, we’d all be ready to get back at it.

And while that’s true for the majority of the population, the number of people who simply don’t want to return to what used to be their “normal” work environment has skyrocketed.

U.S. companies are struggling to get employees to come back to work. Stimulus spending and employment benefits have grossly impacted motivations. Often, take-home income increases by staying at home and remaining unemployed rather than going back to work.

This challenge for the labor market is compounded by those who are simply refusing to come back to the office.

The main driver is those who desire to stay home and maintain the flexibility with their schedule that they enjoyed during the pandemic. They simply don’t want to give that up, but they do want to keep all of their compensation and benefits.

I’ve seen this dynamic myself. In speaking with so many of my friends and colleagues in the tech industry, the hardest challenge right now is getting employees to come back to the office.

There is a rebellion of sorts from employees that simply don’t want to do it. And this is leading to a wave of resignations.

And for many, it is a condition of new employment. For the next 12 months, I see somewhat of a reckoning in the employment market.

Many will push hard for remote work, but it will likely come at a cost in the form of reduced compensation and upward mobility.

And those who do return to the office will hold the advantage.

It will take the longest to sort this balance out in the tech industry, as this is where the largest glut of job openings exists. That means that the employees have more bargaining power at the moment. Elsewhere, this problem will be solved more quickly.

And once the stimulus checks and benefits come to a halt, the employment imbalance will snap back in no time. And that means that the kinds of supply chain bottlenecks that we are witnessing everywhere will be released.

In the end, “how” and “from where” we work is a deeply personal issue. There are always pros and cons.

And there is always the elusive search for a great work/life balance. I certainly haven’t found it, and I gave up trying to a very long time ago.

But I do wish those who are searching for it well. There will be trade-offs. But for those with reasonable expectations, I know it’s possible.

The biggest funding round in blockchain history…

Crypto startup Solana just raised an impressive $314 million in a funding round led by Andreessen Horowitz – one of Silicon Valley’s top venture capital (VC) firms. This is the largest funding round in the history of the blockchain industry.

To be precise, Solana raised exactly $314,159,265.359. That was intentional. The reason? That is the number you get when you multiply the mathematical constant Pi (π) times $100 million. Pretty clever.

And think about this – investors did not receive equity in Solana as part of this raise. Instead, they received Solana’s digital asset, the SOL token.

To me, this speaks volumes about the excitement surrounding Solana right now. With no equity ownership in the project, investors are betting heavily on the SOL token gaining mass adoption.

As for the project itself, it’s easy to see why investors are so excited about it. Solana is designed for high-speed, low-cost transactions. That’s something the Bitcoin blockchain struggles with.

In fact, Solana can settle transactions in a second or less. For comparison, it takes bitcoin transactions at least 10 minutes to settle – and often longer.

But Solana wasn’t made to compete with Bitcoin. It was built to run smart contracts and decentralized finance (DeFi) applications.

Smart contracts are agreements that automatically execute once the agreed-on parameters are met. They don’t require a trustee or any other third party to settle.

And DeFi applications seek to bring traditional finance functions to the blockchain. These are functions like banking, lending, insurance, and asset exchanges.

The difference here is that putting these applications on the blockchain cuts out third-party institutions. This reduces costs and the potential for corruption while making financial services available to a much wider customer base.

Solana isn’t designed to compete with Bitcoin, but I expect it will be a strong competitor to Ethereum.

Of course, Ethereum is the world’s second-largest blockchain project, and it’s the largest project focused on smart contracts and decentralized applications. So Solana has a way to go.

Yet here’s the potential X factor…

Solana is built on a coding language that isn’t exclusive to the blockchain industry. That means a wide range of skilled developers currently working in other industries could easily jump in and begin coding for Solana. It doesn’t require coders to learn how to do something new from scratch.

Ethereum, on the other hand, runs on a coding language that isn’t used outside of the blockchain industry. That means its pool of potential developers is smaller, which could limit how much support it receives.

So Solana is absolutely a project to watch going forward.

And with this massive raise, Solana has all the money it needs to commercialize its blockchain and help establish its network effect. With the right moves, I could easily see this quickly becoming one of the top blockchain projects on the planet.

And if you’re looking for a way to profit as our financial systems adapt to these kinds of new technologies, then go right here to view my recent presentation.

Package deliveries in 90 minutes or less…

I’m not kidding. The program will explore the potential of using commercial rockets to deliver supplies and materials to any location on Earth in 90 minutes or less. 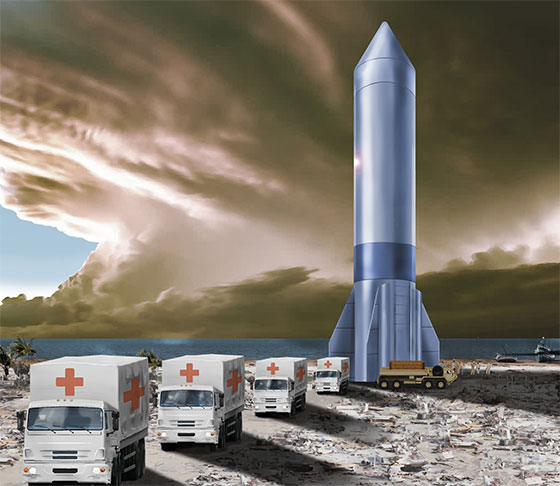 This is something that would not have been possible a decade or so ago. But with all the progress companies like SpaceX, Relativity Space, Astra, and others have made on rocket technology, delivering packages by rocket is now entirely realistic.

In fact, with the reusable boosters that have been developed, it makes perfect sense.

The U.S. Air Force is budgeting nearly $50 million next year for this program. And it seeks to develop a system for shipping 30–100 tons of cargo via rocket.

The good news is that there are plenty of rockets that can handle this payload capacity. The technology is readily available today. Companies like SpaceX could start facilitating deliveries before the year is out.

So I absolutely see this rocket cargo program coming to fruition. And that got me thinking…

Once the U.S. Air Force proves that supplies can be delivered via rocket, there’s no reason why this can’t expand to the private sector. Logistics providers like DHL, FedEx, and UPS could easily contract with rocket companies to offer premium, 90-minute deliveries for high-value packages.

Of course, the cost would be in the six-figure range. So this isn’t something that would be widely used.

But I can envision a scenario where large companies and governments would occasionally want to pay extra for the immediate delivery of high-value goods.

And as always, the costs would come down with adoption and volume.

So this is a fun story to watch. We typically think only of space travel or launching satellites into orbit when we think of rockets.

But commercial air travel halfway around the world and logistics anywhere on the planet are two other applications that will be realized in the near future.

Facebook just announced that it is going to launch its own smartwatch product. In typical Facebook style, this is a copycat move.

The social media giant is eyeing Apple’s success. And Facebook doesn’t want Apple to become even more powerful than it already is. It sees Apple as a threat to its long-term business.

After all, Apple sold a whopping 34 million Apple Watches last year, making it the most profitable watch in history. Facebook sees this demand and wants a piece of it.

And Facebook’s watch will be similar to the Apple Watch. The key difference is that it will come with a detachable display. This display will have a camera on the front and the back of it.

One camera will enable video calling, while the other will allow users to take pictures and videos that can be immediately uploaded to Facebook’s suite of applications – including Facebook, Instagram, and WhatsApp. 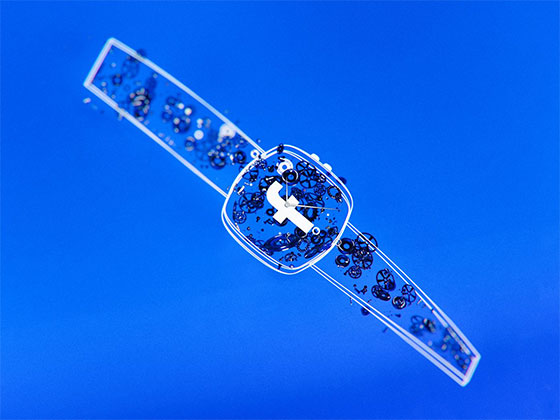 But I think this product launch is a mistake. Here’s why…

Facebook already has a successful virtual reality (VR) product under the Oculus brand. And it has been working aggressively on a pair of augmented reality (AR) glasses.

To me, AR and VR are two areas that present massive opportunities in the consumer market (AR more so than VR). In fact, I think AR eyewear could eventually replace the smartphone entirely. That’s a market opportunity worth $70 billion+ a year.

On the other hand, Facebook’s watch won’t do anything that a smartphone doesn’t already do. It won’t confer any additional benefits. The only difference is that it will sit on the wrist. That’s it.

I don’t think it’s differentiated enough for Facebook to spend resources on, and it will likely be a distraction.

The only application that might make sense is if a Facebook watch were wirelessly connected with Facebook’s AR eyewear. The movement of the wrist could potentially be used as a control mechanism for the user interface in the AR glasses.

That said, this feels like an unnecessary amount of technology when voice, fingers, and potentially blinks of the eye could be used more seamlessly as control mechanisms.

So my prediction is that Facebook’s smartwatch won’t be very successful. Apple has already carved that out and made it eminently useful and fun.

I would advise the company to focus on its AR glasses. That’s where the big opportunity is.

P.S. As regular readers know, I have an ax to grind regarding the initial public offering (IPO) market.

It used to be that the world’s best tech companies went public early, allowing normal investors to buy shares of exciting startups on public exchanges. Amazon is the best example of this.

And those who took a chance on Amazon’s IPO got incredibly rich. But the sad fact is that this isn’t remotely possible today. Average retail investors have been locked out of the best tech companies.

Fortunately, I have a solution. I just had to go back to Silicon Valley to discover it.

I have been working ferociously behind the scenes to build a list of the best small- and micro-cap tech stocks that are currently trading at a lower valuation than when their VC backers invested in them.

I’m at the point now where I almost have “the List” ready to share with Brownstone Research subscribers… and I’ll reveal it on Wednesday, June 23, at 8 p.m. ET.

For readers who would like to learn more about “the List” and what I have discovered poking around Silicon Valley for the first time in over a year, please RSVP to attend this event – Silicon Valley “Unlocked” – next week.

Given how timely this information is, I encourage everyone interested to act on this quickly. Just go right here to reserve your spot.