That’s what it cost the winning bidder to get the first seat on Blue Origin’s first human flight to space with Jeff Bezos and his brother Mark.

It was definitely an exciting weekend. This is the beginning of a new era – the dawn of commercial space travel. And it all begins next month. The auction took place on Saturday, and the flight is scheduled for July 20.

We don’t yet know who the winning bidder is. Blue Origin hasn’t announced it yet. I wish I could say it’s me, as I’d love to take my subscribers on that journey. But $28 million for a relatively short trip is pretty far out there.

Obviously, there were some egos at play. After all, there is only one seat available for the ride – and only one “first” time.

But the excitement doesn’t end there.

There’s a well-known rivalry between Jeff Bezos and Richard Branson. Both have been racing to get their respective businesses, Blue Origin and Virgin Galactic, to commercial operations as soon as possible.

And with all the hype around Bezos’s July 20 launch, Virgin Galactic is pulling out all the stops in an effort to get Branson into space before Bezos on the VSS Unity SpaceShipTwo spacecraft. The target is the July 4 weekend.

It’s pure speculation, but it is possible. Based on the last successful flight conducted by Virgin Galactic, another one is within reach by early July.

We’ll know how serious Virgin Galactic is if the company files its commercial reusable spacecraft operator’s license with the Federal Aviation Administration (FAA). Yes, there is such a thing. And it is required to enable a flight with Branson into space.

Neither flight is without risk.

Both Bezos and Branson clearly understand the dangers involved. Perhaps this is why Bezos formally relinquished his executive role at Amazon in advance of his flight. The timing isn’t a coincidence…

Either way, it sure is exciting to watch. This is history in the making, and we’ll hope for safe flights for both of them.

Honeywell, which got its start manufacturing thermostats 115 years ago, is now forming a deal that will bring quantum computers to market as early as this year.

Regular readers of The Bleeding Edge may remember we spoke about Honeywell – the large conglomerate that provides technology and services to the industrial, aerospace, energy, and commercial building sectors – in June of last year. That’s when it claimed to have the world’s most powerful quantum computer.

At the time, Honeywell was rather light on details about its quantum computer, H0. It based this claim on a metric called quantum volume.

The metric was received with some skepticism by the rest of the industry, which has been focused on the number of fault-tolerant qubits, or the time it takes to solve a complex problem. This is how players like Google, Rigetti, and D-Wave have been measuring performance.

It’s not unusual for weaker players in high tech to create a new metric that somehow demonstrates that they have the best solution. It tends to be more marketing than substance.

This potentially makes the two businesses a great match, as there is virtually no crossover.

Additionally, Honeywell is a $166 billion conglomerate. Any revenue generated from its quantum computing endeavor is just a drop in the bucket on its financial statement. It really wouldn’t move the needle on Honeywell’s share price.

Spinning the business out has potentially more upside. Assuming there is substance, it’s far better to let the business run and incentivize the team to be successful.

The details of the merger show Honeywell injecting about $300 million of cash into the new entity. This gives it a 54% stake in the newly formed company, which will be staffed by 350 employees.

And there are already talks of this new merger going public. That’s exciting since it’ll make this one of the few publicly traded pure plays on quantum computing.

Additionally, the new business is targeting $1 billion in annual revenue in the next two to four years. That would be realistic if the technology is almost ready for commercial sales.

And with a plan to roll out its first products by the end of this year, the newly formed company might just have a shot at it.

In the event that there’s more substance here than has been announced, this could really light a fire under the rest of the quantum computing industry to accelerate further commercialization.

This printed rocket is headed to space…

The Terran R is the latest rocket to enter the space race.

It’s a rocket built by Relativity Space, a company building autonomous rockets and launch services for satellites. Its unique selling point is that its rockets use 100x fewer parts, so they can go from raw material to flight in 60 days. And they’re reusable.

And now its latest rocket can launch a 20,000-kilogram (kg) payload into low earth orbit (LEO).

This is a 16x upgrade in payload size over its existing rocket, Terran 1, which can deliver a 1,250 kg max payload.

Here’s how that compares to rockets from Musk and Bezos:

As you can see, Relativity Space is clearly in the mix in providing payload services to space.

What I find fascinating here is this rocket feels and even looks like a next-generation SpaceX rocket.

Here’s the design of this beautiful rocket: 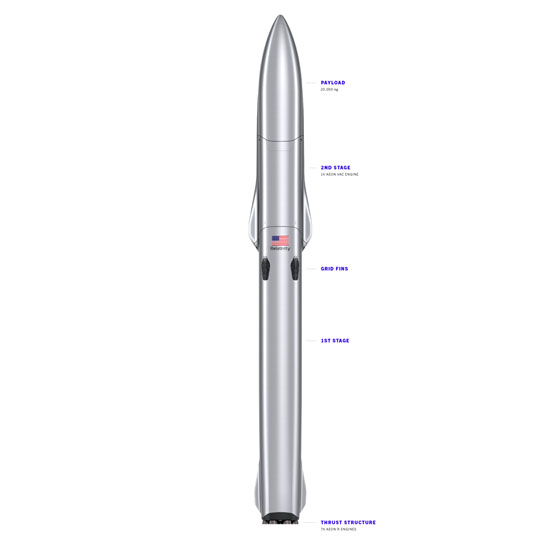 It is extremely aerodynamic with a smooth surface all around. There are even grid fins on the rocket that look similar to SpaceX’s design. They are just placed in a different location on the booster.

At 216 feet tall by 16 feet wide, this rocket is very impressive… And we’ll now see if the Relativity Space team can deliver.

Right now, Relativity Space is planning to launch the Terran R in 2024 in Cape Canaveral. But even before that, the company is planning to send up its small payload Terran 1 later this year. The company is making solid progress as a new entrant into the field.

And the announcement of Terran R wasn’t a coincidence. It was made in conjunction with Relativity’s most recent Series E venture capital round, which raised $650 million. This brings the most recent valuation of Relativity Space to $4.2 billion.

This is exactly how SpaceX got its start. Ever increasing funding rounds will allow Relativity to gain the level of financing necessary to build rockets and launch payloads into orbit. Relativity’s last round was back in November, where it raised $500 million at a $2.3 billion valuation.

All this progress for a company that was founded in 2015 with a who’s-who list of investors. Impressive! I wouldn’t be surprised a bit to see the next raise at $1 billion or more within the next 12 months.

A company focusing on the “buy now, pay later” trend might become the largest fintech initial public offering (IPO) of all time.

Swedish company Klarna allows users to order products online or in-person without having to pay for everything upfront. Klarna does this by deferring immediate payment and then scheduling smaller payments over time.

You may have noticed this feature popping up more and more lately when checking out at retailer websites like Macy’s, Nike, Sephora, or Bloomingdale’s and its selection of more than 250,000 retail partners worldwide.

It’s an attractive deal, as Klarna can offer zero interest rates or fees to customers if they qualify and pay on time. It does this by charging the retailer a fee. The logic behind it is that Klarna can generate more sales for the retailer through this offer.

This type of deal between Klarna and the retailer makes sense, as the company may never have gotten the order in the first place if the customer had to pay the full amount upfront. That makes it a win-win. Both businesses get what they want.

And customers like that Klarna only performs a “soft” credit check, which means it doesn’t affect their credit score or show up to other lenders.

And Klarna’s latest funding round indicates this space is witnessing incredible growth.

This growth is translating to transaction volume. In the first quarter of 2021, Klarna had $18.1 billion in transactions, which is nearly double its $9.9 billion figure from a year ago.

These figures are why some of the world’s biggest investors are getting involved in its latest funding round. SoftBank’s Vision Fund led the round, which generated $639 million in capital. It now places the company at a post-money valuation of $45.6 billion.

Other notable backers of Klarna include Ant Group, Sequoia Capital, SilverLake, and others.

This makes the “buy now, pay later” company one of the highest-valued fintech companies in Europe – and in the world, for that matter. And these backers expect further growth ahead.

The odd part here is Klarna has not been profitable over the last two years. This is likely a combination of it growing at an incredible rate and writing off delinquent customers.

But this did not deter major venture capitalists from jumping in. They likely see these two issues as problems that can be solved over time.

As Klarna improves its risk analytics and credit assessments, it will likely see fewer defaults. And the expansion of the company will lead to more customers (and sales) worldwide.

So this is just one more development in the budding fintech trend we’ve been covering in these pages. If Klarna does continue to succeed, its payment model may become the new normal for retail shoppers.

I expect Klarna to go public soon. And with the current level of interest, this company could rocket higher when it IPOs.

So we’ll have to wait and see if Klarna becomes an interesting investment opportunity… Or simply the latest of the grossly overvalued and overhyped IPOs to hit the markets.