Van’s note: In today’s weekend edition of The Bleeding Edge, we’re bringing another brand-new essay from Outlier Investor editor Jason Bodner. And you can look forward to hearing from Jason every Saturday going forward.

Regular readers will remember Jason introduced an idea called “stealth tech” a couple weeks back, with a unique look at the financials space.

Now, Jason takes a look at another “stealth tech” sector… One that both he and Jeff Brown are highly bullish on for 2021 and beyond…

The last scene of The Empire Strikes Back flickered in the theater. My dad and I watched Luke Skywalker say “ouch” as his fingers got pricked by a robot.

Only they couldn’t be his fingers… because he just lost his hand to Darth Vader’s lightsaber. This was a bionic hand, meant to replace the one he lost.

I hadn’t seen anything like that before. I mean, robotically enhanced humans?! Star Wars was science-fiction, but could it really happen one day?

It got my mind going. I wondered: what would life be like when I was Luke’s age? Or even older? Would people really need parts of their body replaced with robotic ones?

Before we get into that, let’s back up just for a moment…

A few weeks back, I introduced to you this idea of “stealth tech.” These are companies that might look boring on the surface… But, behind the curtain, it’s clear they’re deeply entrenched in the world of technology.

And, because of their disguise, they’re not looked at like some of today’s high-flying tech stocks. At least, not yet. But Big Money might give us a useful clue as to which companies are wolves in sheep’s clothing.

What’s most exciting is when we can follow that Big Money into these stealth-tech companies. They can reveal future tech trends as potential industry game-changers.

At the time, I explained how Big Money was gobbling up boring old financials firms. Only, secretly, they were stealth-tech investments. For example, buying a mortgage stock was actually an investment into cloud architecture, networking equipment, and data analysis. Why? Because the innovative mortgage business that company does relies on the latest technology.

When cutting edge tech underpins and drives a business, it doesn’t really matter what they sell or do… it’s stealth tech.

This week, I thought about stealth-tech standouts in health. When I did, I realized I watched this play out my entire life in a very personal way…

My dad woke up in a hospital July 20, 1969. The day sticks out because it’s the day men landed on the moon. It’s also the day he found out he had Type-1 Diabetes.

His pancreas failed to make the insulin needed to regulate his blood sugar. At the time, all that was available was a basic understanding of the disease. He’d need to modify his diet and inject himself with insulin at least four times a day.

For years he’d prick his fingers, just like Luke Skywalker getting his new bionic hand fitted. Only when he did it, it was to test his blood sugars – sometimes 10 times a day. It got to the point he didn’t even need needles anymore to draw blood.

That all changed recently. Dad was always lucky to have access to the latest medical breakthroughs for diabetes. He got his first insulin pump sometime in the 1980s. This meant no more injections. It was cutting edge at the time.

Then, about a year ago, I noticed something new on his stomach. It looked like a patch, but raised from his skin. I asked him what it was.

He was so excited and told me: “Jason, it’s amazing! They came up with a new way to monitor blood sugar. It’s always on and constantly reading my blood with a tiny needle. I don’t even know it’s there.”

He said: “Wait, you want to see the best part?”

He grinned ear-to-ear as he took out his iPhone and opened an app. On it, was a minute-by-minute graph of his blood sugar and a bunch of analytics.

He said: “My sugars are so even now. No more huge spikes or big troughs that make me moody, or worse, in diabetic shock! And I’m a step closer to a ‘closed-loop’ system.”

He explained his insulin pump helped regulate his insulin. But it didn’t “talk” to the new blood monitor patch – at least not yet. But when it did, it would effectively be an artificial pancreas that he literally wears on the outside of his body.

Well, that’s happening now with Tandem (TNDM), the company that manufactures the pump. They created a communication protocol so the blood monitor can talk to the Tandem pump. Then it really is an externally worn artificial pancreas – utterly groundbreaking.

The moment I first saw his new blood monitor – I realized my dad was just like Luke Skywalker. Just like the scene that blew me away sitting next to him in 1980. Where Luke needed a bionic hand, my dad needed a bionic pancreas.

These medical marvels are only made possible through the best technological advances. And they happen today at an exponential pace. That’s why many healthcare and biotech stocks are more examples of stealth tech investments.

DexCom Inc. (DXCM) manufactures the nifty blood monitor patch my dad has. He told me about the stock for years, saying, “Jason, just watch, it’ll be huge.”

I knew he was right. And right he was… since my dad first got excited about the blood monitor in 2016, DXCM skyrocketed more than 300%.

But when I checked it on my Outlier Investor system, my jaw dropped again.

As a quick refresher, I spent over a decade and hundreds of thousands of dollars to develop a system that can spot Big Money investor activity early on. These are the investors that devote their entire business having an edge over other investors – with massive amounts of human resources, access to industry insiders, and a deep bankroll.

Everyday people like us can’t compete. That’s why I built a system to detect when these big investors buy the best quality stocks – even as they try to be quiet about it. It’s a way to “level the playing field,” as Jeff Brown puts it.

And sure enough, my data showed Big Money buying DXCM stock back in 2013. On June 11, 2013, DXCM showed up on my top 20 report: my research company’s weekly report showing me the 20 best potential outliers. If it’s on the top 20 report, odds are it’s a future outlier.

Look what happened… it was a bumpy ride, but the stock is up 1,547% since it first appeared on my list. 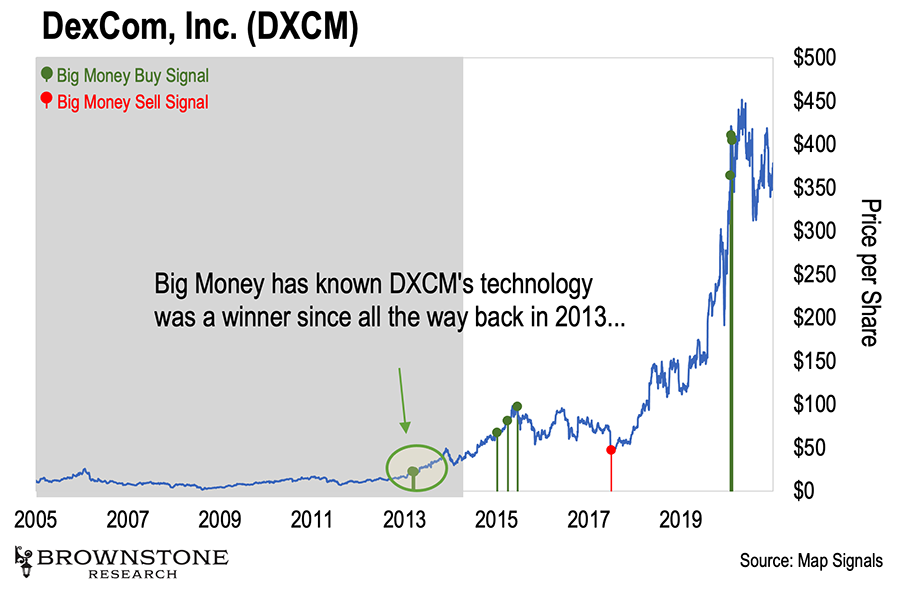 Now, I’m not recommending you rush out and buy DXCM today. I’m just trying to show you that Big Money can essentially see the future. They can find investment stories that may not be mainstream for years to come – like a bionic pancreas connected to an iPhone app.

Realizing that almost everything is technology, we can find future trends just by watching what Big Money buys in real-time. That’s my specialty.

And since 2021 started, 14 biotech, healthcare services, and healthcare equipment companies have appeared on my top 20 report: many of them more than once. This is stealthy buying of biotech, and even stealthier buying of technology.

To get broad exposure to biotech, one could buy an ETF like the iShares Nasdaq Biotechnology ETF (IBB). That wouldn’t be a bad play.

But I prefer to focus my investments on outliers – the handful of stocks that account for all the gains over the last 100 years. I’d rather own that small pocket of stealth-tech medical outliers than the whole biotech market through an ETF. History says holding a few outliers makes for monster gains.

Sci-Fi Is Here, but My System Saw It Coming

To me, today’s most exciting theme is stealth tech. The tech companies that don’t look like tech companies. Like DexCom – which may seem to just make medical devices targeted for diabetics. But it’s really an innovative tech firm enhancing humans with artificial organs.

Bionic limbs and organs aren’t just a sci-fi fantasy. They are right here – right now. I see it with my own two eyes all the time.

But Big Money saw this eight years ago and rode a massive 1,550% gain while no one else thought to look (except dad)!

Only my system analyzes every stock every day. It tries to find the best ones with growing sales, earnings, and amazing prospects being scooped by Big Money. It’s where we’ll likely find our next sci-fi technology become a reality.

As a kid I used to fixate on whether I’d have robotic limbs. I didn’t have the answer.

But today my burning question when I wake up is: What’s the next stealth-tech outlier?

Now I know that Big Money always has the answer.

The tactic we use there is just what I told you today. We identify the highest-quality stocks in the market with significant Big Money interest, buy those stocks, and wait for the gains to roll in. It’s really that simple.

Even better… the Big Money encourages me to take a deeper dive on the companies my system flags. And when we do, we often find tech trends that are years away from becoming mainstream – with multi-bagger profit potential.

To learn more about how my system works, and why Jeff Brown invited me to join Brownstone Research when he saw it, just click here.