This quarter – Q3 – saw 94 IPOs raise $27 billion. That’s the highest deal count for a third quarter in the last 20 years. It’s even more impressive because third quarters tend to be tough as they have the two slowest months of the year for public markets, July and August. 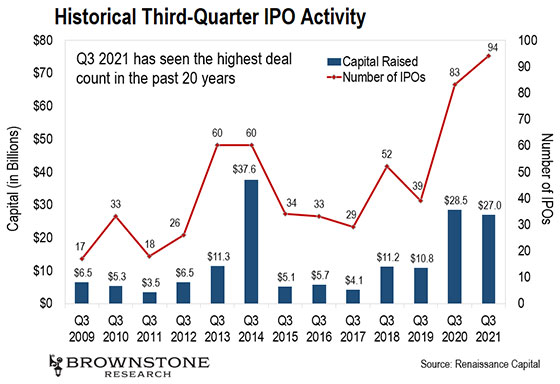 Better yet, these results came on the back of 101 IPOs in the first quarter and 118 in the second. We can expect to see a very strong fourth quarter as well – in both deal count and amount raised. We are in for a stunning full year for 2021.

And all of this happened amidst the lunacy of the pandemic and the haze and awkwardness of Zoom calls. There has been so much demand for new issuances, so much capital, and such underlying economic strength pre-pandemic… nothing could stop the strength in the markets this year.

Next year might be a different story, but we’ll talk more about that in the fourth quarter. For now, we’ll continue to take advantage of this exciting market and stack the deck in our favor.

And tomorrow, we’ll have a look at where all these IPOs are coming from.

The NFL just struck a 5G deal with Verizon…

Per the deal, Verizon will provide “5G Multi-View” to NFL stadiums across the country. This is a feature that will allow fans in the stands to also watch the game on their phone from seven different live camera angles.

The idea is that fans will have an ideal view of the game no matter where their seats are located. It puts the viewing experience in the hands of the fans. This allows them to choose whatever angle they want to view the action from, instead of a producer making that choice for them.

This is a perfect example of an advanced application that is only possible with 5G technology.

The two killer features of 5G are super-fast speeds and extremely low latency. In other words, there are no noticeable delays in the connection. It’s about as real-time as you can get.

These features make it possible to deliver seven live video streams to 60,000–70,000 people in the stadium at the same time. This simply would not be possible on 4G. Anyone who has tried to use their 4G phone at a large event can probably attest to that. Try streaming Netflix or watching YouTube in an environment like that.

At times, it can even be hard to get a 4G connection with that many people in the same vicinity. It results in a massive traffic jam over the wireless network. It just doesn’t have the throughput.

Fans of these teams may have already experienced the service for themselves. And Verizon is set to roll out 5G Multi-View to the remaining NFL stadiums in the coming months.

So this is a great example of how 5G technology will enable applications and services that were not possible with previous generations of wireless technology.

And this is just the tip of the iceberg…

5G is going to reshape the world right in front of our eyes. And something Apple has been working on behind the scenes is about to drive the technology forward even faster.

In fact, my research suggests that Apple’s new launch is about to trigger a $12.3 trillion opportunity. This is the kind of industry-changing event that has only happened twice in the past two decades.

I hosted a live briefing last week to fill readers in on what Apple is up to – and why it matters to us as tech investors. For those who missed it, there’s still time to view a replay of the event right here.

We’ll keep it up for a short time, but please don’t delay. Some time-sensitive investments require action right now.

UPS just made a clever move to play “catch up”…

Shipping company United Parcel Service (UPS) just made a clever acquisition that will help to solve its ongoing delivery problems.

As we know, UPS has been severely overburdened ever since the onset of the COVID-19 pandemic last year. Consumers have come to love the convenience of online shopping, and UPS’s delivery load has exploded as a result.

But this has led to a rash of late deliveries.

My packages often arrive two or three days later than expected. I’m sure many readers have experienced similar delays. It’s all because there are too many packages and not enough drivers to handle them.

So deliveries are getting pushed out. And UPS ends up prioritizing only the overnight or two-day deliveries where they are charging more for their delivery service.

To solve this problem, UPS just acquired gig delivery company Roadie. This is an application that connects gig economy workers with retail shoppers. Here’s how it works…

Certain retail stores including Home Depot contract out deliveries to independent drivers on the Roadie platform. When an online order comes in, these retail stores fulfill the order and pay a gig worker to make the delivery, often on the same day. And thanks to its success, Roadie has grown its contractor base to 200,000 drivers.

This is a classic “acqui-hire” with a modern twist. After all, Roadie doesn’t have employees per se. It’s a gig worker platform that matches drivers and deliveries.

UPS acquired Roadie specifically to bring its 200,000 drivers into the fold. UPS can leverage this network for package delivery. And it will likely be a great recruiting ground for UPS to attract full time drivers. Smart.

This will help UPS address the biggest challenge it has right now. It needs to hire more than 100,000 drivers for its business. It’s so desperate it has built an accelerated driver hiring process that enables new employees to get a job in just 30 minutes. And UPS will pay $15–22 per hour.

The Roadie acquisition is a creative approach to solving a very hard problem. We’re in a fascinating economic environment right now.

We have millions of open job positions, yet a material part of the able workforce is unwilling to work. This results in rising pay and more flexibility.

Roadie drivers can choose to remain flexible and work as they desire on the platform or decide that they want to join UPS full time. Either way, we should see an improvement in UPS’s deliveries over the next few months.

Yet another major development with CRISPR genetic editing technology…

A new study published in the Science journal has blown open the doors for CRISPR genetic editing technology. And the author is someone many readers will be familiar with – Feng Zhang.

As a reminder, CRISPR is like software programming for DNA. It allows us to “edit” genetic mutations that cause many diseases.

And Feng Zhang is one of the original inventors of CRISPR. He is also one of the founders of Editas Medicine (EDIT). We have closely followed his work in my premium research services, and we hold EDIT in both the Exponential Tech Investor and the Early Stage Trader portfolios.

Respectively, we are currently up 226% and 139% on EDIT in those two services.

Well, Zhang and his team just discovered an entirely new realm of enzymes that can be used for CRISPR genetic editing therapies. They call this new class of enzymes IscB. They are thought to be the “ancestors” of the Cas9 enzyme commonly used in first-generation CRISPR therapies.

What’s so exciting about these IscB enzymes is that they are much smaller than their Cas9 counterparts. And that means they can fit inside smaller delivery systems such as viral vectors or lipid nanoparticles.

The significance here is that these delivery systems are much better about “sneaking” the enzymes to where they need to go in the body. That helps avoid the body’s natural immune system, which is designed to attack any foreign objects detected – even therapies intended to help.

For this reason, certain disease targets have been out of reach for the early CRISPR Cas9 therapies. The enzymes were too big to “sneak in.” IscB puts those diseases back on the drawing board for potential treatments.

And get this – Zhang’s team discovered about a million unique enzymes in the IscB class. Each can be used for different genetic editing therapies.

So we have expanded our CRISPR toolkit basically by about a million times. IscB enzymes open the door to all kinds of new CRISPR therapies – each designed to cure diseases that have been untreatable up to this point.

And there’s another interesting dynamic at play here.

The scientists determined that these IscB enzymes are also present in many other animals and plants. That means we can apply these CRISPR techniques using this newly discovered class of enzymes to them as well. This could lead to some interesting applications down the road.

As a result, we are going to see a wave of new companies formed specifically to develop CRISPR therapies around these IscB enzymes. That’s something I’m going to be tracking very closely.

We have already profited handsomely from the pioneering work done by our first-generation CRISPR companies. And we can certainly expect massive investment gains to come from this new class of IscB companies as well.

Stay tuned for that…