When markets get volatile, investors often write in, biting their nails about a potential market crash. Where can we safely store our money to avoid the worst pain?

And with the recent volatility we’ve been seeing, this topic has surged once more. Between Evergrande’s troubles in China… updates from the Fed about interest rates and “tapering”… and worries about the Delta variant of COVID-19, investors are understandably worried about the prospect of another crash.

So today, I’d like to tackle that question. The thing is… I bet you won’t like my answer. It will likely differ from most other tips or news articles you’ll see.

I’ve learned extraordinarily valuable lessons from having lived through several of the worst crashes in recent history… For several, I had a front-row seat.

And through those experiences, I’ve found the best way to weather any storm… and win.

Learning From the Past

I’m Jason Bodner, editor of Outlier Investor. In my research service, I show readers how to target the top stocks being bought up by “Big Money” players – institutional buyers, venture capitalists, hedge funds, and the like. We get in early and ride the wave of their buying power as it pushes up the stock price.

I track this action through a process of careful analysis and research – including my proprietary algorithms.

And I always keep a close eye on unusual activity in the markets… including any potential downturns.

As I mentioned, I’ve lived through several. I started my career on Wall Street just 10 weeks before 9/11. Then I watched helplessly as Enron and WorldCom collapsed along with the global stock market.

Many people thought we would never recover from such disasters. Others simply panicked and sold. But I watched the markets grow to giddy new highs. It seemed nothing could bring it down.

Then… greed and leverage in the housing market did just that.

The Great Financial Crisis unfolded before my eyes in 2008–2009. Clients of mine were in business one day and insolvent the next. Millions of Americans watched their 401ks meltdown, including me.

Plenty of other scares happened too. 2011 brought the Taper Tantrum. There were geopolitical events like Crimea, the Argentinian default, and China fears. Health scares were right there with Avian Flu, MERS, SARS, Ebola, Zika, and – most recently – COVID-19.

Some were corrections. Some were crashes. All were painful – some more than others.

But all crashes, future and past – including Black Monday in 1987, the pop of the tech bubble at the turn of the century, and the mother-of-all crashes in 1929 – have one thing in common.

They all come wickedly and then they leave.

And they go on to new highs.

In all the crashes I’ve lived through, all of my money came back because I didn’t sell.

Many people look at certain assets for market protection. But somehow most of them have a way of deceiving everyone…

As for stocks, though, crashes have always paved the way for new highs. A 100-year chart of stocks shows the ultimate resiliency of publicly traded companies. 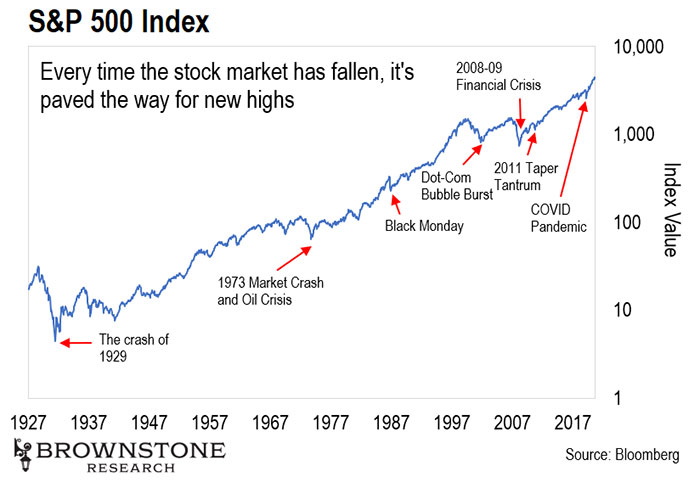 And U.S. stocks are about as patriotic as I can imagine.

They make it through the hard times: the wars, disease, disasters, and terrorist attacks. Stocks are businesses run by people. And American businesses ultimately have American resolve: They not only survive but thrive.

So when I answer the question “How do I protect my money in a crash?” the answer readers may not like is this:

The best defense is a great offense.

Practicing preparation, patience, and a cool head is the single best way to get through a crash. But it’s all part of a bigger plan.

Here’s what I, personally, do…

Often, I find trying to avoid short-term pain is a short-term thought process. No one (including me) wants to see their assets dwindle on paper short term. But virtually, the only guarantee in the game of investing is that setbacks will occur.

Whether or not they are painful is actually all in your head.

Loosely translated, it means when everyone is high-fiving after looking at their brokerage statements or Coinbase accounts, perhaps it’s time to lighten some risk then. Stockpile some cash by adding to what you’re saving along the way.

Then, when the “apocalypse” comes, you are well-armed. When everyone is in despair and fear is sky-high… that’s when you’ll want to be shopping. The “apocalypses” so far have always passed. And if the next one doesn’t, we have bigger fish to fry than worrying about our bank accounts.

That exact strategy has allowed me to double my money on my purchase of “boring” stocks like Home Depot during the March lows of the pandemic.

I couldn’t have bought without cash or the right mindset. That means I don’t fear the inevitable – I prepare for it.

More About the Mindset

Chasing hedges in offsetting assets sounds great in practice, but history has proven to me, at least, that there’s a better option.

You may think I’m nuts for never selling.

But Warren Buffett also said, “Our ideal holding time is forever.” Stocks he bought 30 years ago now potentially pay quarterly dividends that are more money than his initial investment. He understood patience, calm, and the magic of compounding.

So what’s my answer when you ask my opinion on what the best investment types are in a market crash?

I focus all my efforts on two asset classes: cash and stocks.

You can’t have one without the other. And they work remarkably well during a crash, provided you know what to do when it happens.

It’s less about the asset and more about the mindset.

P.S. If you’d like to share your thoughts about this topic – or any other – send in your comments right here.

And if you’d like to learn more about profiting with my Outlier Investor service, then simply go right here for the full story.