Good news again this week from the U.S. Labor Department.

Initial jobless claims fell by another 99,000 to 1.31 million in the week ending July 4. And continuing jobless claims also fell to 18.1 million – the experts were forecasting 18.8. 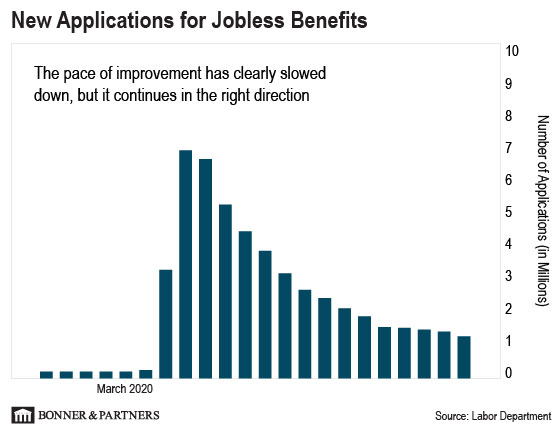 Week after week, economists continue to miss the mark with their negative forecasts. The pace of improvement has clearly slowed down. But it continues in the right direction.

This is expected. After all, the global economy still has a long way to go before returning to normal.

For example, yesterday, United Airlines announced that about half of its U.S. workforce could be furloughed starting October 1 due to the continued lack of demand for air travel.

October 1 is essentially when the requirements of the U.S. CARES Act for the Paycheck Protection Program (PPP) end. Companies are not required to keep employees on the payroll past that date.

Industries like the airlines and hotel chains are going to suffer through the end of the year. The same goes for “tourism cities” like Las Vegas.

I’ve been traveling a lot these past few months. And I can say from personal experience, it isn’t pleasant.

I’m currently self-quarantined for another two weeks after my last trip. As absurd as I know these measures are, I’m still a team player.

Yet these big headlines from companies like United do not mean that the unemployment situation will get worse. They might make for good fodder in the media – more “evidence” of the pending apocalypse – but we know that the reality is very different.

St. Louis Federal Reserve President James Bullard, one of the few economists I’ll listen to, stated yesterday that he expects the unemployment rate to plummet to 8%, maybe even 7%, by the end of the year.

I certainly share Bullard’s optimism. The data backs it up.

This successful athletic apparel retailer became popular through its line of yoga-centric products and has now become a flagpole in the athleisure movement. At least in part, we have Lululemon to blame for people wearing fitness apparel when they have no intention of exercising.

And Lululemon just made a big move into the health technology space. The company acquired an interesting health tech company called Mirror for $500 million.

This is a great acquisition.

The product is literally a stylish mirror that doubles as a screen. The device is over four feet tall, and it projects real fitness trainers on the screen. Mirror offers prerecorded workouts as well as weekly live classes and personal one-on-one training.

The Mirror unit comes with a camera hidden behind the screen. That allows it to monitor users’ movement. And it allows users to communicate directly with their personal trainer. Mirror can also monitor users’ heartbeats and estimate calories burned during the workouts. Here’s a visual:

In this sense, the product is similar to the popular Peloton bike, except users can do everything from yoga to meditation, weightlifting, dance cardio, and boxing. It’s an impressive lineup of workouts. Mirror boasts a library of thousands of classes available on demand.

It costs about $1,500 to buy the unit, which can be financed monthly over 36 months, and access to classes costs $39 per month. This “subscription model” has been wildly successful for technology companies in recent years.

At first glance, Lululemon may seem like an odd acquirer of this health tech company. But Lululemon is a lifestyle brand. No doubt it will demonstrate Mirror’s product in its retail stores.

Plus, Lululemon invested in Mirror’s Series B venture capital round back in October 2019. Obviously, it liked what it saw from the inside.

Before we dismiss this story, investors should know that health tech is a massive business.

Peloton is now a $16 billion company on pace to do $1.7 billion in revenue this year. Given its diverse workout offerings, Mirror has the potential to do even better. That makes this $500 million price tag look like a steal.

And in light of the COVID-19 pandemic, people will be working from home far more than they ever have before. Get this, Peloton showed a 94% spike in subscriptions as the pandemic shut down gyms.

And even after the dust settles, many large and midsize companies will have a greater percentage of their employees working remotely.

Mirror is a perfect product for this shift in the workplace. The convenience of an at-home fitness product paired with Mirror’s social elements will continue to resonate with consumers. I expect this product to do very well and the acquisition to pay off for Lululemon.

The TikTok story has a dark side…

We talked about social media platform TikTok last month. At the time, it had just become the fastest social media app to reach one billion users.

As a reminder, TikTok hosts short self-produced videos of people doing funny, skilled, or stupid things. It is most popular with teenagers and young adults.

But there is a dark side to the story.

TikTok is owned by Chinese company ByteDance. We mentioned last month that ByteDance was fined for violating child privacy laws in the United States. That’s why I said I would not be comfortable with my children using it.

It turns out that TikTok is even worse than I thought…

A researcher reverse engineered TikTok and determined exactly what information was being sent back to ByteDance.

The app collects everything about a user’s phone. It documents the phone’s hardware specs and every app that’s been downloaded. It pings the phone’s GPS location roughly every 30 seconds. That means TikTok tracks exactly where all its users are at all times.

TikTok also knows which Wi-Fi networks its users connect to. It documents the address of the router as well as every other device connected to each network.

And if that wasn’t scary enough, TikTok has written its software code to allow it to potentially download software to Android phones and then run that software without the user’s knowledge or consent. The software could be anything, like malware or surveillance software. That’s not just unethical… That’s illegal.

And where does the information go after it has been collected? Back to China.

For those in the know, this level of pervasiveness is far worse than anything Google or Facebook do. And regular readers know I’m not very fond of either of those companies.

So TikTok is generating attention in the industry. India has banned it along with 58 other China-based apps. Indian officials went so far as to say that these apps were a direct threat to national security and defense.

As many readers have likely seen in the headlines, the U.S. is now considering a ban on TikTok also.

Parents and grandparents need to know about this. Are we comfortable having every aspect of our children and grandchildren’s activity sent back to a company with ties to the Chinese government?

My recommendation is to make sure that TikTok is not installed on any device in your household. And if parents permit social media for their kids, stick with Instagram and/or Snapchat for the younger generations. At least we know that they’ll adhere to child privacy laws.

A form of AI can revive dead actors…

We will wrap up today with a quirky topic…

Disney just put out interesting research on the use of a form of artificial intelligence (AI) called neural networks for the production of high-resolution video effects. This tech will have a dramatic impact on Hollywood and the movie industry.

Disney created an AI algorithm that analyzes a video of one person and photos of another person… and then “swaps” the faces.

This is basically a “white hat” use case for deepfakes, which are plaguing social media right now.

As a reminder, deepfakes are altered media content. They are fake videos or fake speeches where AI puts a different face or voice onto the speaker. It can make people appear to say or do things they didn’t say or do.

Up to this point, we have talked about the nefarious uses for deepfakes. Here we have Disney producing a positive application of the technology.

One thing this could do is prolong the career of popular actors. Think of people like Tom Cruise or Julia Roberts – they are no longer spring chickens.

With this tech, they could play the role of younger characters in movies even as they age, and the AI will simply swap in a younger rendition of their face from pictures.

And just in case we think that’s too farfetched, something similar has already happened. Carrie Fisher appeared in the latest Star Wars movie using visual effects even though she passed away in 2016.

Now, that movie did not use this neural network technology, so Carrie Fisher’s character is a little off. Viewers can tell something’s not quite right. That won’t be a problem with this new technology.

We can expect Hollywood will adopt this technology quickly. Neural networks aren’t just the domain of Disney’s research labs. The technology is widely available and already used for numerous applications.

P.S. Don’t forget to save this date: July 15 at 8 p.m. ET – next Wednesday. That’s when we will host my Timed Stocks Accelerated event.

There, we are going to talk about a little-known group of stocks that come with a “timer” attached to them. Once that timer hits zero, the stock price can rocket hundreds of percent in days or even hours.

It all comes down to a government process that impacts a select group of what I call “timed stocks.”

Should a government process have such a profound impact on publicly traded stocks?

I don’t know. But I developed a system for leveraging this process into monster gains in this little corner of the market. And I should mention, these “timers” are often seven months or less. It’s truly a recipe for big, fast gains.

And best of all, everyday investors are in the ideal position to take advantage of these types of stocks. They are too small for the institutions to get into… until after their timers hit zero and the stock price explodes.

I know this sounds sensational, but I assure you the opportunity is real. As I mentioned yesterday, some of my readers made 432% in just 41 days from one of these timed stocks. And we are set to book another triple-digit gain in the coming days – after holding for just seven months.

I’m prepared to share all the details about this opportunity with you next week. I will go over how these timed stocks work, and I will even reveal when my next timed stock is set to explode higher. Simply go right here to register for the event.