Not long ago, air travel was the ultimate luxury. The idea of flying to Paris in a single day, where before would take weeks on a ship… It was the stuff of dreams.

But nowadays, it’s become the Greyhound bus of the sky. When people once dressed in their best clothes for a flight, today flip-flops and sweatpants are the norm. The airline business has become boring… Even utilitarian.

But back in the 1950s, flying was the pinnacle of technological innovation. While today we might think of airlines as a boring industrials stock, they were once the Apple of their day. Aerospace, aviation, and defense were to the 1950s… What hot tech is to the 21st century.

For how ubiquitous air travel has become in the past 70 years, most airline stocks haven’t made people money. On the contrary, investors have historically lost money on airlines stocks. Over the last 20 years, the ARCA Airlines Index (XAL) returned -33%.

But right now, there’s a “next generation” of airline stocks spurring an exciting investment opportunity. Thanks to recent volatility, the sector is on sale. And below, I’ll show you exactly what this sector is, and how you can get involved…

Every Sector Has Its Outliers

In my weekly Bleeding Edge dispatches, I’ve been showing you how my Big Money system works.

It’s simple… I cast a huge net over 5,500 stocks. I isolate the ones with the best fundamentals – growing sales, earnings, and high profit margins.

Then, I filter down even more to spot the ones being bought by Big Money investors – the major institutions of Wall Street. This is where we find future stock market outliers… The tiny 4% of stocks that outperformed T-bills over the last 100 years.

The thing is, outliers can reveal themselves not only in the stock market, but in sectors too – like airlines.

Recall that if you bought the entire airlines industry in 2000, then you’re down -33%.

But if you instead bought an outlier airline, such as Alaska Airlines (ALK), you’d be up nearly 1,000%. Better yet, if you used Big Money buying as a cue from 2010, you’d be up 7x in half the time it took you to be down –33% for the whole industry.

And that’s including COVID… ALK has erased the losses it suffered from the start of the pandemic – one of few airlines to do so.

Check out the chart below (backtested data in gray)… 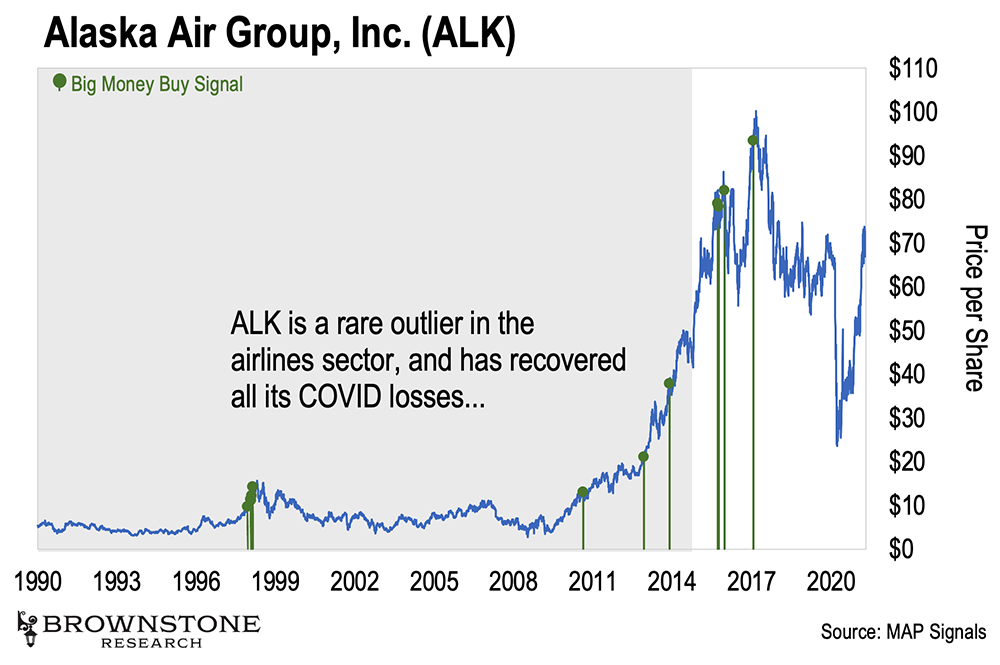 But when you look at the fundamentals, it’s not really surprising. Headed into COVID, ALK was a much stronger business than most other airlines…

Compare that to the average rates of 15 other airlines at the time: Three-year earnings growth of -13%, three-year sales growth of 5%, and a 5.6% profit margin.

These are the kinds of stats you should look for whenever you’re doing fundamental research. In my experience, they paint the clearest picture of a potential market outlier.

Of course, now that the airline business is mature and saturated, it may seem like there’s little opportunity to find stocks like this…

But I’m here to tell you, we’re about to enter a second aerospace golden age. The opportunity is here and now. And it lies far beyond where our eyes can see…

Look Past the Sky

Since about the same time in the 1950s, space exploration has been rolling in tandem with the airline industry. But where airlines were commercialized and sold to the public, space was reserved for the government and military. Because of this, the general public most often views them as industrials stocks.

It’s been that way for decades… Until now.

Just as unassuming financials and healthcare stocks can become “stealth tech” titans of tomorrow, many industrials stocks are, too – particularly this new niche of aerospace.

It may seem that investing in space travel has only recently been made available to the public. But as we’ve learned with stealth tech, you have to dig a little to find what you’re looking for… And once you do, you learn that for years, publicly traded defense giants like Lockheed Martin, Northrup Grumman, and General Dynamics have been forging ahead in space exploration.

And in recent years, consumer space travel is eating up headlines… With the world’s top business leaders going all-in.

Elon Musk is constantly touting his SpaceX and his reusable rockets and capsules. Richard Branson sells space trips on Virgin Galactic. Jeff Bezos has Blue Origin, which is just starting to test its rocket designs.

All offer the promise of cheaper, faster, more reliable, and reusable space travel. And the best part is, they all envision space travel for the common man.

To me, this sounds a lot like what it must have been like when whispers of common air travel grew louder in the 1940s.

We’re at the dawn of a new era of human travel… One to arguably rival the impact of commercial flight.

But these handful of companies aren’t the only ones attacking the space frontier. Some “boring” industrials companies are not only doing it now… But they’ve been at it for years. It’s another example of stealth tech…

And while the consumer space travel business is just getting started today, with a tiny market size of about only $750 million, it’s projected to grow easily 3x by as soon as 2026.

It sounds unbelievable… But I believe that just a few years from now, we may all get the same view that just seven astronauts aboard the International Space Station get today. We’ll be able to look down at the earth, and truly consider the vastness of space…

The New Golden Age of Aviation Is Coming Fast

Now, what’s the best way to get exposure to this trend?

For broad exposure to this trend, you could consider the SPDR S&P Aerospace & Defense ETF (XAR). It holds some of the industry giants we discussed today, like Northrup Grumman, Lockheed Martin, and General Dynamics – all of whom are innovating in the space travel space.

Right now, the boring aerospace, aviation, and defense sectors are lagging big tech. But they might just be sleeping space giants…

I believe the leap to space travel for the masses will be even bigger than the seismic flight revolution before it. And the good news is… We’re still early.

The space travel revolution means fortunes will be made. The industry is a multi-trillion-dollar one on the cusp of exploding. Getting positioned now should reap huge benefits in the future.

You’ll probably do fine by sticking to these ETFs in the coming years. But if you really want the best chance of making money from the new space race, then you need to invest in the outliers… The tiny percentage of stocks that outperform all others – like ALK.

And that’s what my new investment advisory Outlier Investor is all about… Finding the best stocks being bought by Big Money – in any industry – and riding them to massive gains.

Recently, your editor Jeff Brown invited me to explain my system top to bottom. And during the presentation, I showed him how my system has led to 1,000%-plus returns for my subscribers… Along with several other multi-bagger gains.

To see what it’s all about, and learn how it can help turbocharge your portfolio, just click here.