The CHIPS and Science Act – known primarily as the “CHIPS Act” – is now the law of the land. President Biden signed the bill this past Tuesday.

The legislation sets aside $52.7 billion to promote the domestic semiconductor manufacturing industry.

Of that money, $39 billion is earmarked to incentivize manufacturing, and $13.2 billion will support research and development (R&D) and workforce development.

Ultimately, it will set the stage for a multidecade trend in advanced semiconductor manufacturing. And that will have implications for the semiconductor industry, the American economy, and us as investors.

Today’s essay will be a little longer than usual. But this is a nuanced conversation, and it deserves a more comprehensive understanding.

We can think of semiconductors as the “brains” of modern electronics… And they are vital to our modern economy.

Everything from our cars to our smartphones, from household appliances to advanced military weapons… all of this relies on semiconductors to operate.

The first functional transistor – the most basic and fundamental component of semiconductors – was invented in the 1940s by Bell Labs.

The developments and advancements in semiconductor technology are literally the reason why Silicon Valley is called “silicon” valley. The industry and investments gave us companies like Intel (INTC) and Fairchild Semiconductor and all of its offspring.

But for all of America’s dominance in semiconductor design and innovation, it may surprise us to know that the United States has been losing market share in semiconductor fabrication (manufacturing) for years… 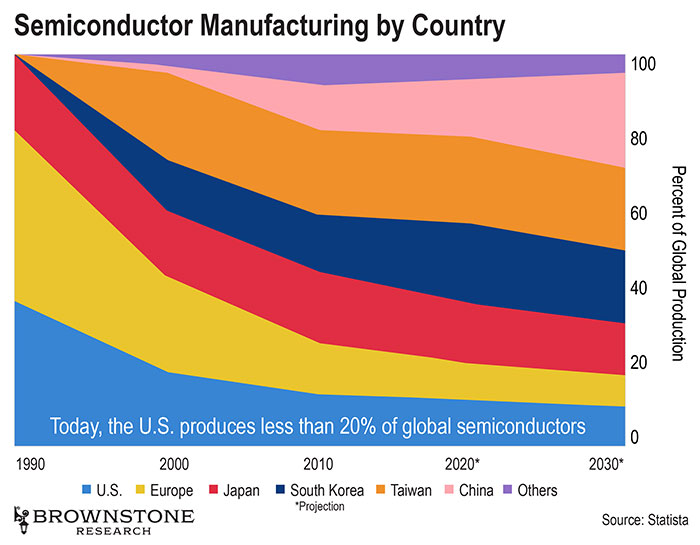 As recently as 1990, the United States produced close to 40% of the world’s semiconductors. But as we can see, that has dramatically changed over the last three decades.

How did this happen?

The world spent the last three decades focused on globalization. It built global supply chains… based primarily on the location with the lowest cost of production.

As a result, manufacturing became centralized in many industries, in an effort to drive down prices with low-cost labor and sell them with healthy gross margins.

The world experienced an unprecedented period of growth, improvement in quality of life, and access to goods and services at lower prices, which ultimately brought more than a billion people out of poverty.

And the world became more interconnected and interdependent than ever before.

Yet during the last several years, society began to recognize both the practical and ideological issues with this global manufacturing architecture.

Egregious violations of intellectual property theft have also been an issue for the last two decades, and have come to a head just in the last several years.

And aside from these obvious issues, there has been an even more severe problem.

The consequence of centralizing advanced manufacturing overseas is that it made the global economy interconnected and complex.

When the world is functioning normally and all related parties are “good actors,” nobody notices this vulnerability. But after the lockdowns of 2020, the world learned a painful lesson.

Seemingly overnight, certain kinds of semiconductors became scarce. And they weren’t the kinds that went into our smartphones.

A combination of both a rapid shift in consumer demand caused by the pandemic, and the inherent capacity constraints in any manufacturing base, caught the industry off guard.

For example, next-generation video game consoles like Xbox Series X and PlayStation 5 were launched in November 2020… talk about incredible timing.

In the spring of 2021, tens of thousands of unfinished Ford Super Duty trucks were parked indefinitely at the Kentucky Speedway in Sparta, KY… 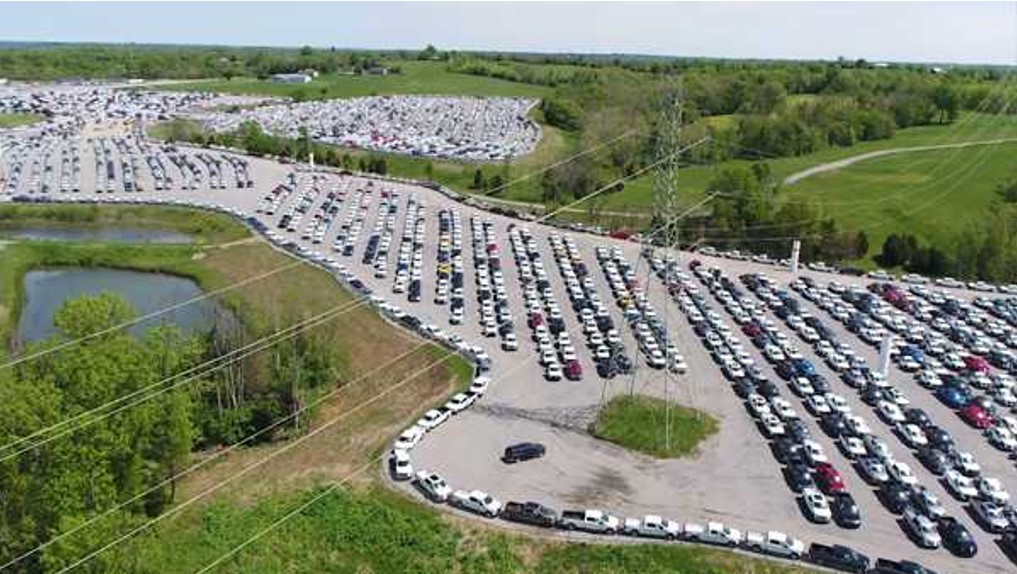 All of them needed tiny semiconductors that the manufacturer couldn’t acquire in time for manufacturing.

The result is that even today, many used cars are selling at higher prices than new cars. And game consoles are often sold on online marketplaces like eBay for multiples of the retail price.

And for a time last year, new home appliances were either delayed by months or simply unavailable. In fact, the lead times for these kinds of products can still be measured in weeks – if not months.

All these events seem disconnected. But they all have one thing in common: a shortage in semiconductors.

And these aren’t the most advanced semiconductors like the ones that run the latest iPhone or our laptops, but instead are the kinds of common, mature semiconductors necessary for just about any electronics product.

And while semiconductor availability has consequences for the consumer economy, there are also national security implications to consider.

All modern military defense systems rely on semiconductors to operate. The Center for Strategic International Studies summed up the connection between semiconductors and military capabilities in June:

The erosion of U.S. capabilities in microelectronics is a direct threat to the United States’ ability to defend itself and its allies.

And there is reason to believe that the supply of semiconductors could get worse before it gets better.

Keep an Eye on Taiwan

I would argue that Taiwan Semiconductor Manufacturing Company (TSMC) is the most important company in the world. Yet very few people know about it.

TSMC is important because it is the world’s largest semiconductor fabrication (fab) company. TSMC accounts for more than half of the global foundry market share: 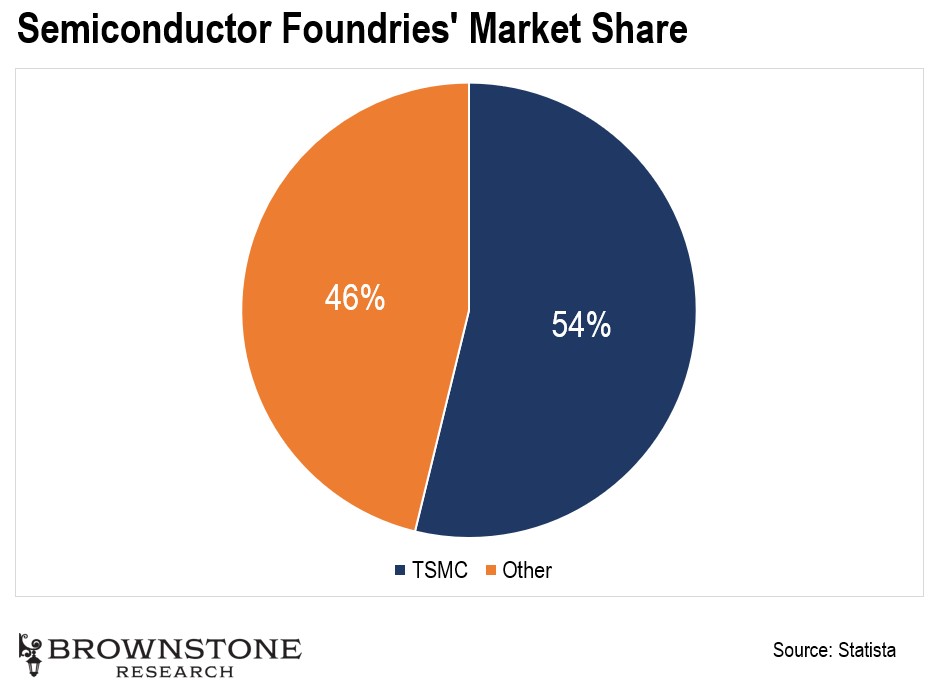 That may prove to be a critical vulnerability.

The Chinese government was furious over Nancy Pelosi’s recent visit to Taiwan. It was a nonsensical visit that provided no benefit to the U.S. and introduced nothing but risk.

In the days leading up to the telegraphed visit, China threatened military action… And it has already delivered.

China made it very public that it was shipping massive amounts of materiel to China’s coastline that faces Taiwan. And within 48 hours of Pelosi’s visit, China engaged in military actions/drills around all sides of Taiwan.

It fired 11 short-range missiles around all corners of Taiwan. And Chinese warships, fighter jets, and drones maneuvered near the island as well.

China effectively surrounded the island and clearly demonstrated its ability to subsume Taiwan in a moment’s notice.

Many fear a military invasion of Taiwan could be imminent. But even if that never happens, the truth is, China has been influencing and infiltrating Taiwan for decades.

I’ve been to Taiwan more than 100 times during my career as a technology executive.

And the truth is that China is brilliant at playing the long game. China’s control over Taiwan won’t require military action – the reality is that China and its “operatives” are already there.

The world has finally learned that economic independence and resilient supply chains are a matter of national security.

Put even more simply, manufacturing for high technology is coming back to America – and to Europe, for that matter. Countries all over the world will be looking to bring their manufacturing base back within their borders, or – at a minimum – into countries that are believed to be steadfast allies.

That’s what the CHIPS Act is about. It’s a way to jumpstart this trend that I’ve called “The Great Recalibration.”

Samsung is building a $17 billion fab in Texas…

TSMC is constructing a plant in Arizona for another $12 billion…

ON Semiconductor and GlobalFoundries are expanding in New York…

And Micron is scouting out Texas as an option for a major factory.

This is just the beginning. We’re going to see these kinds of announcements continue as the industry responds.

And with the CHIPS Act providing economic incentives to build, this recalibration can now happen even faster than before.

As a final point, this revitalization of American manufacturing will have secondary effects.

Factory automation is powered by recent advancements in artificial intelligence, machine learning, computer vision, and, of course, robotics. These are the “secrets” to human labor augmentation and driving higher levels of efficiency and productivity.

And that still means more jobs. We’ll need to build the factories, maintain them, calibrate and train the robots, and continue to develop new and improved products and services.

And as the transportation industry continues its migration toward electric vehicles, the amount of semiconductor content in each vehicle increases significantly.

That’s great for the industry and also great for consumers.

As EVs employ technology like autonomous driving software, not only will our cars drive themselves, logistics and delivery services will be able to “work” in a fully autonomous mode that will deliver even more efficiencies, lower costs, and greater conveniences for consumers.

I say it often, but we really do have so much to look forward to.

We’re going to see the world around us take a new shape in the coming years as these changes to manufacturing, supply chains, and tech innovation take place.

Editor’s Note: Tomorrow, we’ll share one more piece of “unlocked” premium content on private investing… Tune in to hear what’s been happening among the private investment markets during the economic downturn this year…