Longtime readers know I’ve been a private investor for years now. And I’ve invested in over 300 deals… with incredible results. Private investments are how I’ve ensured my family will be provided for… and are simply the most powerful way to grow our wealth.

That’s especially important in today’s market. Stocks, bonds, cryptos, even gold… none of these investments have performed well this year. And the continuing economic uncertainty means we need to look outside our usual investment strategies.

That’s what I’ll show investors with my Private Deal Room.

I’ll explain why private investments are so transformative… and I’ll even share the name of the next big private deal I’ve been keeping my eye on. This company is on the cusp of its next raise… and it could be one of the most profitable investments I’ve ever recommended.

So, if you haven’t done so already, please go right here to RSVP for tomorrow night.

Even if we’re unaccredited investors… even if we only have a few hundred dollars to invest… we can still add this unique asset class to our portfolios. It’s open to everyone. So please, tune in tomorrow at 8 p.m. ET for all the details…

The first brain-computer interface trial in the U.S…

It was just a matter of time… The first brain computer interface (BCI) human clinical trial in the U.S. was approved by the Food and Drug Administration (FDA) and is now officially underway.

As a reminder, BCI is technology that implants tiny electrodes in the brain, allowing a human brain to effectively be connected to a computer. This enables an individual to control a computer with just their thoughts.

Naturally, the first application for this kind of technology is medical. Stroke victims, paraplegics, amputees, and patients suffering from neurodegenerative diseases could all benefit from this tech.

And that’s what the first BCI trial in the U.S. is all about.

Brooklyn-based startup Synchron beat Elon Musk’s Neuralink to the punch. It received approval from the U.S. FDA to do human trials with its BCI last August.

And Synchron just implanted a BCI into its first U.S. patient – an individual suffering from amyotrophic lateral sclerosis (ALS), also known as Lou Gehrig’s disease. ALS is a devastating neurodegenerative disease that impacts nerve cells in the brain and spinal cord, resulting in loss of muscle control.

I should point out that this isn’t Synchron’s first implant. The startup already has four patients testing the BCI technology in Australia. And it expects to enroll nine more patients in the U.S. trial.

What I like about Synchron’s approach is that it is relatively less invasive – It doesn’t require brain surgery. Instead, Synchron’s stentrode device can be implanted in the brain through a small incision in the neck. 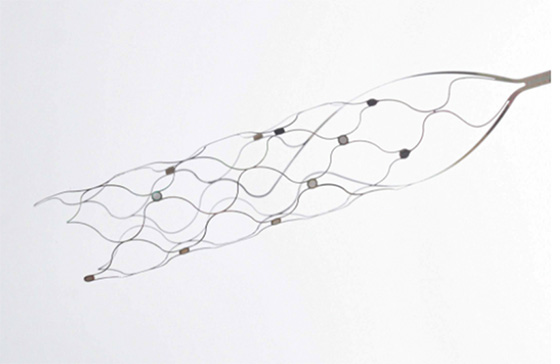 This operates much in the same way as a stent. When inserted, the device is compressed… and once at the desired location near the motor cortex, it expands so that the electrodes get closer to the neurons in the brain. Then it can recognize the different patterns that the neurons fire as the patient thinks.

These patterns are sent to another small device that’s inserted just under the skin on the patient’s chest, which is connected to the stentrode. And that device transmits the signals wirelessly to a computer.

I know this is pretty wild… Certainly the realm of science fiction.

But so far, the BCI works quite well. It allows patients to send text messages to friends and family… with just their thoughts. And it allows them to control a computer’s cursor to navigate the web and even make online purchases. This is performed simply by thinking about what commands to give the computer.

So this is an incredible development. And it’s a sign of much bigger things to come.

Now that Synchron has its clinical trial running in the U.S., we are likely to see Neuralink get FDA approval to follow suit.

Neuralink’s approach is more invasive – it does require brain surgery. But it’s also more ambitious in scope. It can get electrodes even closer to neurons in the brain, and that should enable even greater functionality.

So the race is on. We have two impressive companies, with two different approaches, and each has respective breakthroughs with BCI technology. And while patients in need of this technology to communicate are the first market, in time, we shouldn’t be surprised when we see BCI technology used as an “upgrade” to our daily lives.

I don’t think I’ve ever seen a large block of related patents issued at the same time as this. And we can glean some strong insight into Apple’s AR strategy from this move.

First of all, Apple clearly submitted these patents as a group. This was intentionally done by Apple, in order for this body of intellectual property (IP) to be granted patents around the same time.

And that means Apple has been working hard to protect its approach to AR in a systematic way. It’s looking to carve out a body of IP, rather than just a key patent.

Most companies issue a few key foundational patents at first, then they build on those over time. Apple took the time to build a comprehensive patent portfolio right away. Clearly, the company wants to have a large moat in place ahead of its upcoming AR product launch.

If we look at the patents themselves, most of them are focused on how to measure, capture, and digitize objects in the real world… and how these objects can interact with augmentation through Apple’s AR software. There’s a lot about 3D-sensing and depth measurement technology in here as well.

So this strengthens my belief that Apple will launch the developer version of its AR eyewear this fall, most likely around the time of its major new product conference – which usually happens in September. This will get the product out to the developer community so they can start creating apps and games for it.

If I’m correct about this, Apple almost surely will launch the mass-market version of its AR product next year. And I think that will be a pivotal moment for the industry.

As I have said before, AR eyewear will eventually replace the smartphone. This is the next mass-market user interface for computing systems. The tech will be adopted widely once the glasses can do everything a smartphone can do for us, except it will be hands-free. No more looking down at the screen or punching buttons.

And that day is coming fast. All eyes will be on Apple’s big announcement two months from now.

A frightening application for artificial intelligence…

We’ll wrap up today with a textbook example of how artificial intelligence (AI) should not be used. Fair warning – this is scary stuff.

A team of scientists in Switzerland was working with AI for the purposes of drug discovery. That’s the Convergence trend that we have talked so much about in The Bleeding Edge.

And it makes perfect sense. AI can be used to search for new molecular compounds, predict how proteins fold, and determine how various compounds or drugs would interact with each other within the human body. This has the potential to speed up therapeutic development and dramatically improve efficacy.

However, this team in Switzerland, as a thought experiment, turned the AI towards neurotoxin research. They wanted to know if AI drug discovery technology – which looks for helpful chemical compounds – could potentially be misused.

So they turned the AI toward identifying new neurotoxins that could be deadly if ingested or inhaled… And the results are frightening.

In less than six hours, running on a normal computer in the lab, the AI-generated 40,000 molecules that could be deadly enough to kill humans. Here’s an image of the model:

The LD50 dataset here is all known neurotoxins. The pink spots represent all the neurotoxins that the AI discovered. And the black line represents the baseline neurotoxin used in the study. It’s called VX, and it’s so lethal that just a few salt-sized grains could kill a human. We wouldn’t even know that we inhaled it until it was too late.

So everything to the right of that black line is more deadly than VX… and look at how many of the AI’s neurotoxins fit the bill.

And here’s the worst part – the cat’s out of the bag now. The LD50 dataset exists. And the AI algorithms used in this study are open source. So anyone with a scientific background could easily replicate this study and produce similar results.

Obviously, this is exactly what we don’t want to see when it comes to AI research.

I’ve said many times before that one of the greatest challenges we face will be around how to ensure that AI is used for good and not for ill.

We’re living in a world right now where governmental agencies and massive non-governmental organizations are involved in dangerous developments. And many nation states are using technology to affect their desired political outcomes, irrespective of the damage caused to the affected human population.

If nefarious actors get their hands on this neurotoxin research, it could make the COVID-19 pandemic that we’ve been forced to suffer through for the last two-plus years look like a walk in the park.

So I really hope the industry steps up to police the irresponsible and dangerous use of AI. If it doesn’t, the results could be cataclysmic.