At a small conference held at the Green Bank Observatory in West Virginia in November 1961, one of the most famous equations in science was revealed:

N = number of civilizations with which humans could communicate

fP = fraction of stars that have planets

fi = fraction of planets with life where life develops intelligence

L = mean length of time that civilizations can communicate

It was an incredible period in time when the exploration of space suddenly became important. For the United States, it became a matter of national security. It was that year when the Apollo program launched, with the goal of landing the first humans on the moon, a feat that still hasn’t been repeated more than 50 years later.

The question back then is just as important as it is today: are we alone?

The Drake equation is unique is that there is no single answer. There is no way to solve it. We can’t possibly know with specificity the value of each variable. In that way, it is a probabilistic way to estimate the number of civilizations in the Milky Way Galaxy that “we” might be able to communicate with at any given time.

Back in 1961, the worst of the naysayers might make variable assumptions that result in N equaling 1. Which is to say they believe that there is only “us,” only Earth, as a singular civilization in the entire galaxy.

But things have changed dramatically since 1961. In the last 20 years, thousands of exoplanets have already been discovered. And we now know that there are more than 100 billion galaxies in the universe – and potentially more than a trillion. That means there are literally trillions of exoplanets in the universe. How many are capable of supporting life? The implications are so mind-boggling and hard to comprehend.

One thing is for certain, though. Given what we now know about our universe, N does not equal 1. It’s a number that is much, much larger. Frank Drake, whom the equation was named after, believed that N equaled 10,000. If true, that would mean there’d be 10,000 civilizations we could theoretically communicate with in our own Milky Way Galaxy.

It’s hard to believe, I know, but when we consider that the Milky Way alone contains hundreds of billions of stars and stretches more than 100,000 light years across (a single light year is 5.8 trillion miles), 10,000 civilizations is likely too conservative.

Frank Drake was a pioneer in the search for extraterrestrial intelligence. He was a giant in his field. And earlier this month, we lost him at an age of 92.

It’s a shame he won’t be here when it happens. The discovery of intelligent extraterrestrial life will be one of the most incredible, and likely humbling, experiences that will ever happen. It feels like we’re getting close. The James Webb Telescope is advancing the fields of astronomy, astrophysics, and astrobiology faster than was imagined. The value of “N” is likely increasing with each month that passes.

It may all end very badly, or it may be quite the opposite, ushering in a new golden age for the planet. Either way, I hope I’m still around to see it. The search for extraterrestrial intelligence has never seen as much interest as it does today. Not only do we have the technology to make the discovery, we also have the money to make it happen.

Remarkably, the search for extraterrestrial intelligence is almost entirely funded through private contributions from people who share the same dream that Drake had – to prove that we are not alone. And I’m happy to say that I am one of those people.

Do I get points with that?

It was bound to happen. One of the Earthbound hotel chains had to jump at the opportunity.

Voyager Space Holdings just struck a deal with the Hilton hotel chain to design living facilities with a private space station called Starlab. This is certainly a first.

We’ve talked about the rush to develop private space stations for quite a bit recently.

Several companies are working to develop their own space stations. But Voyager Space Holdings is the first to partner with an existing hotel company. This is telling.

Clearly, Hilton sees a path towards commercial space travel and extended stays in space. I just wonder if we will get Hilton Honors points for these stays. Given the price tag of getting to, and staying in space, it must be a ton of points.

Either way, this is a big milestone.

Voyager Space Holdings and its operating company Nanoracks expect to have Starlab operational in low-Earth orbit by 2027. That puts it a few years behind companies like Axiom Space, which plans to launch its first module in 2024.

Nanoracks was one of three companies to win funding from NASA for building a private space station… along with Northrup Grumman and Blue Origin. Was also recently had a look at a new entrant – Vast – which has a goal of a station that employs artificial gravity.

That makes five legitimate companies racing to get their stations into low-Earth orbit in advance of the decommissioning of the International Space Station (ISS) roughly around 2030. Just having one alternative like Axiom would have been exciting, but five!

The fact that Hilton is now on board indicates how far along these projects are towards making these new stations a reality. I suspect others will follow. These projects won’t just be for government agencies; they are being designed to usher in a new era of space commerce, as well as space tourism.

And given the level of interest already shown in sub-orbital flights like Blue Origin and Virgin Galactic, as well as the progress SpaceX has made with its own private orbital space flights, this is a market just waiting to happen.

Another breakthrough for deploying AI in healthcare…

Interesting research out of Harvard and Stanford is set to unleash artificial intelligence (AI) upon medical imaging. This has major implications for the quality of healthcare going forward…

Yesterday, we talked about how one of the biggest problems for deploying AI in the medical sphere is how there aren’t any large datasets available to train the AI with.

Well, another big problem is that radiologist experts have needed to annotate medical images in order for an AI to learn what to look for. This is tedious, time-consuming work. And most experts simply don’t have the time or incentive to perform this work. It’s no small task either. An AI performs best when it has access to hundreds of thousands of data points, not hundreds. Therewithin lies the problem.

The work coming out of Harvard and Stanford appears to be the solution. The team provided an AI with a dataset of medical images that were not annotated. And it paired those images with the associated clinical reports.

They then used a form of AI called natural language processing (NLP) to “read” and understand the clinical reports so they could be associated with the images.

In this way, they were able to train the AI to read medical images without needing annotations from a medical expert. Doing so eliminates the need for a massive undertaking of annotating images that likely wouldn’t even be possible.

What’s exciting here is that this approach will accelerate the adoption and implementation of AI as applied to medical imaging. And as we have discussed before, AIs will greatly enhance radiologists’ ability to diagnose disease from X-rays and MRIs.

And I can see this going one step further…

We can use this same approach to train an AI in the field of genomics. Companies like Human Longevity have extensive databases of sequenced DNA with associated clinical reports.

We could feed all this data to an AI and have it look for relationships that are consistent across the genomic data. That could provide us with even greater insight into the world of human genomics. And in turn, that could accelerate our efforts to cure all human disease of genetic origins.

We’ll wrap up today with a fantastic AR implementation from a company called MicroOLED. This is something that foreshadows smartphones becoming obsolete…

MicroOLED developed lightweight eyewear that serves as a heads-up display (HUD) for users. This isn’t a full augmented reality (AR) offering. But it does employ clever lens technology to display pertinent information in the wearer’s field of vision.

What’s more, MicroOLED designed its eyewear to pair with the Apple Watch. This creates something of a distributed computing model.

By that, I mean the eyewear leverages the computing resources in the Apple Watch. Certain components don’t need to go into the glasses, which allows them to be sleek and lightweight. 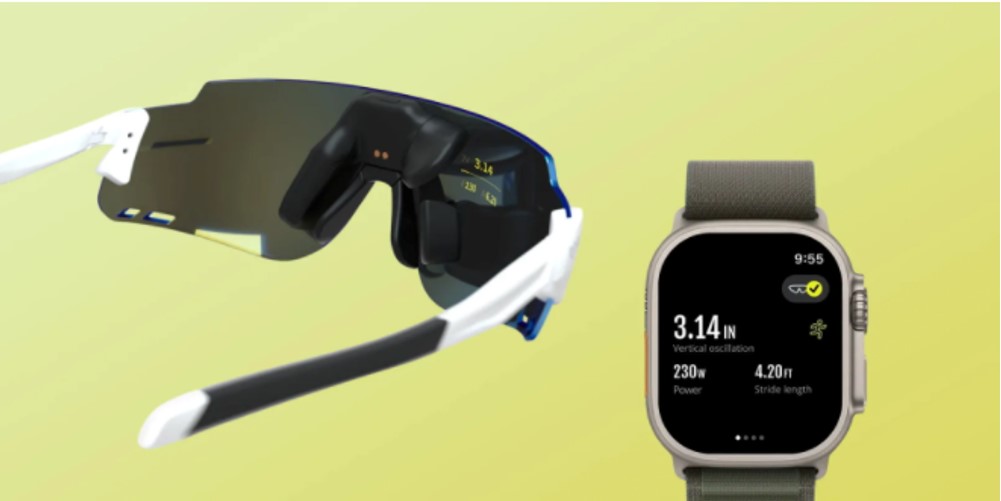 As we can see, these look like a regular pair of sports sunglasses. They aren’t bulky like the AR headset designs we’ve seen so far.

The first iteration of this product was designed specifically for athletes. The glasses sync with the Apple Watch to present the wearer’s vitals and performance information in their field of vision while they are exercising.

So if we think about joggers, cyclists, and rowers – they can constantly gauge their key statistics as they perform without ever needing to look down at their wrist. It’s all right there in their field of view.

This is a simple thing. And it’s powerful.

In fact, it’s easy to envision all kinds of other applications for this technology.

The first that comes to mind is navigation. These glasses could sync with a navigation app to provide us with turn-by-turn directions as we drive. We would see everything right in the lenses as we drive. No more having to look down at the infotainment screen in the car, or even worse, at a smartphone for directions.

Of course, it would be simple for these glasses to show us our emails and text messages as well. We could stay on top of communications completely hands-free.

There are all kinds of games that could build on this functionality as well. The possibilities are endless.

HUD eyewear like this, paired with a wirelessly connected watch like the Apple Watch, make it possible to leave the smartphone at home. This is an interesting intermediate step towards no longer needing a smartphone as a user interface for computing and communications.

And as semiconductors and electronic components continue to shrink in size, eventually all of the computing power, memory, and batteries will be able to fit into a pair of glasses so that even an intelligent watch won’t be necessary.

This is a clear step in the right direction. In fact, Apple may very well take a similar approach pairing its forthcoming AR glasses with either an iPhone or an Apple Watch. Hopefully we’ll learn more before the end of this year with consumer models arriving next year.