I have two great insights and a warning for you today. Our first two stories are incredible. In fact, I did a few fist pumps when I got word of the first one.

As for the warning… It’s even direr than yesterday’s.

The beginning of the end of disease…

We haven’t talked about genome sequencing in a while… But there has just been a major breakthrough.

Early-stage company Veritas Genetics just announced that it has dropped the price for whole genome sequencing from $999 to $599. This is big.

Whole genome sequencing means the sequencing of an entire human genome. Put more simply, this is like mapping out the entire DNA of an individual… all three billion base pairs of human DNA. By any measure, this is an extraordinary feat.

Whole genome sequencing is much more comprehensive than genotyping, which is a form of partial sequencing done by companies like 23andMe and Ancestry.com. Genotyping just looks at a small segment of DNA to determine things like ancestry.

Whole genome sequencing gives us tremendous insight into a person’s health. And it helps identify genetic mutations that cause disease. When those mutations are known, targeted treatments like CRISPR (a revolutionary genetic editing technology) can be used to treat them… and cure the disease for good.

At $599, we are getting to price points where insurance companies can cover genetic sequencing for patients. Price points that are in the hundreds of dollars become economical for insurance companies. After all, tens of thousands can be spent trying therapies to treat symptoms. With sequencing, we can immediately understand the cause and deliver a onetime treatment.

This will open up sequencing to the entire population… not just the few who paid $999 or more for it. This will do two things…

First, this is the age of personalized medicine. It will allow doctors to identify therapies customized for each patient. There will be no more wasting time with one-size-fits-all treatments that may not work and may cause bad side effects.

Second, it will give scientists more data that they can use to connect genetic mutations to human conditions. They will figure out which mutations cause which diseases. Ultimately, that will lead to cures for all human diseases caused by these specific mutations.

So this price drop is an industry maker. Whole genome sequencing will become the norm.

And the price is going even lower. Think about this…

In other words, the cost of sequencing is falling far faster than Moore’s Law. 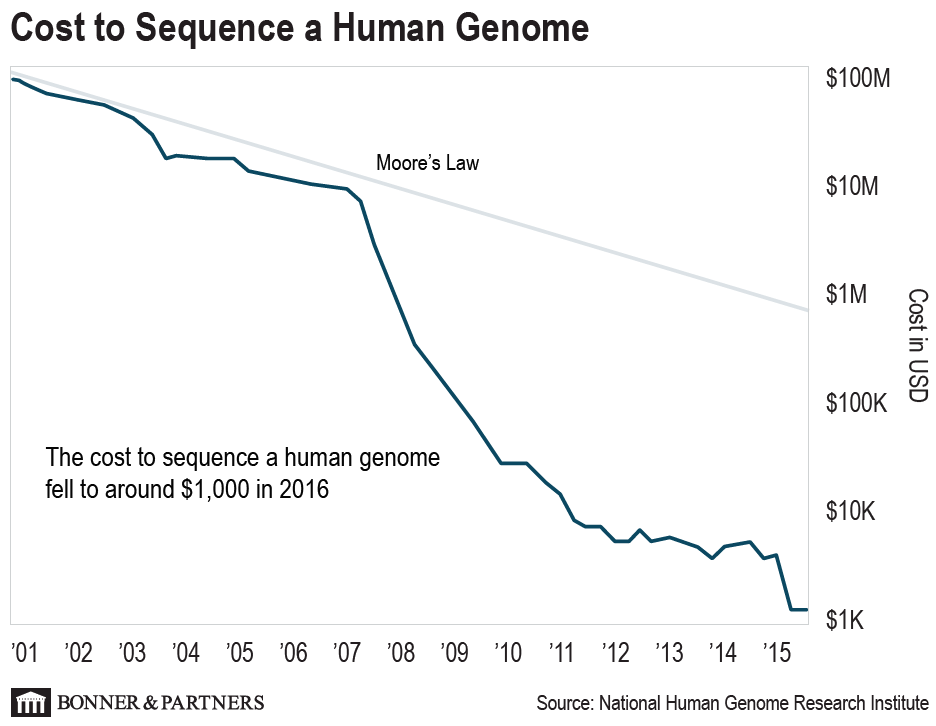 This is why I expect the price to drop down to $100 within the next two years. At that point, all insurance companies will cover sequencing… And the end of disease will be near.

By the way, there are many early-stage companies like Veritas Genetics doing amazing work in the field of genetics and genomics. Because these are small start-ups, most investors don’t have access to them.

But I have spent the last five years working on a system that makes investing in early-stage companies… and massive gains… available to all investors… not just high-net-worth individuals.

If you are interested, I’m hosting a free investor seminar on July 24 at 8 p.m. ET with all the details. You’ll certainly want to be there. Get all the details and save your spot right here.

Later this month, a SpaceX cargo mission will deliver a 3D printer to the International Space Station. The printer is called BFF, which stands for BioFabrication Facility.

But BFF isn’t just any 3D printer. It uses human cells as source material to print human tissue. This is the first step toward printing functional human organs.

This is important for a spacefaring civilization. On Earth, most organ donors are car accident or (more likely) motorcycle accident victims. That’s where hospitals receive most transplants for those who need them.

Obviously, that won’t be the case in space. We need another source… And 3D printing organs in space is a great solution.

But in space with zero gravity, tissues will stay stable. And that will allow them to harden to create healthy organs. It appears zero G may be the key to 3D-printed organs.

If we think about this logically, 3D printing organs or human tissue in space makes perfect sense. Given the limited population in space and the limited number of fatal accidents, 3D printing is likely the only option.

But there is a much larger possibility at hand…

Because zero gravity allows the 3D printed organs to “mature” and become more stable, we could potentially produce replacement organs in space and send them back to Earth for transplants. An entirely new business can be created by manufacturing in space.

Given the dramatic drop in costs to launch payloads into space, we are seeing the birth of new business opportunities in space. 3D organ and tissue manufacturing, asteroid mining, small cube satellites used for data collection, satellite internet services, and commercial space travel are all being heavily invested in by the venture capital community.

An example of how technology should not be used…

And while I remain an optimist on how technology will continue to be a force for good in this world… there will always be bad “forces” that use technology in the wrong way.

On the border between China and Kyrgyzstan, the Chinese border police are forcefully taking visitors’ phones when they enter the country… downloading foreigners’ personal information… and installing secret surveillance software. This software tracks the visitors while they are in China… and even after they leave.

They also intercept text messages… go through emails… and analyze call activity – all without due process or even suspicion of a crime. It’s an appalling and highly dystopian use of technology. And sadly, right now, nothing is being done about it.

It is critical for society, in all countries, to resist this kind of abuse of technology. Ignoring individual rights and using forceful and pervasive surveillance measures will never end well in any country.

I’m a technologist – I believe technology has consistently proven to be the greatest tool we have to solve the world’s greatest challenges. But when used by bad actors, technology can be a powerful tool for oppression, abuse, and crime. And it’s up to the good actors – and society as a whole – to aggressively police the use of technology to ensure that it is used responsibly…

More on this topic tomorrow, as unfortunately, it is not an isolated incident…