The weekend brought some fantastic news. The Centers for Disease Control and Prevention (CDC) approved the Johnson & Johnson (J&J) COVID-19 vaccine for emergency use.

I was surprised to see some projecting that approval wasn’t a certainty. It was obvious that it would happen. The clinical trial results determined 66.1% effectiveness against developing a moderate to severe COVID-19 infection. Interestingly, the results from a multi-country study showed the vaccine was more effective in the U.S. at about 72%.

Aside from the effectiveness, the J&J vaccine doesn’t require such stringent cold chain storage and distribution as the Pfizer/BioNTech and Moderna vaccines.  And the best part is that it only requires a single shot. There is no need to return for a follow-up shot, after which some patients have experienced serious side effects.

But one of the dirty secrets in the pharmaceutical industry is the practice of “managing” the cohort of subjects in clinical trials.

That’s why the clinical trials haven’t seen any mortalities linked directly to the vaccines to date.

Yet as of last Friday, 966 deaths have been reported after the patients received the two vaccines in the U.S. And that’s in addition to 749 life-threatening events, 2,280 hospitalizations, and more than 4,000 emergency room visits reported. This is precisely the kind of information that I would want to have if I or my family were considering receiving the vaccine.

Sadly, the CDC simply mentions that a small number of cases have reported adverse events. That must be a matter of perspective because those numbers don’t seem small to me.

To avoid any misunderstanding, the COVID-19 vaccines have proven to be safe and effective for most people. They are a remarkable accomplishment for the biotechnology industry, which has already catalyzed the next generation of mRNA therapies.

My point is simply that we, the people, should be provided information openly so that we can make an informed decision about our health and the health of those we care for.

Tomorrow, I’m going to dig in a bit further about the interesting timing of the collapse in new cases of COVID-19.

After that, I’m going to share an incredible insight that took me weeks to uncover…  It’s the real catalyst for the plummet in new cases and COVID-19 mortalities.

It is all great news, and I hope you’ll enjoy it. Stay tuned.

Patents are always a great source of insight into product strategies for any technology or biotechnology company. They give us a view, when pieced together, about the future and what it might look like. And a new filing from Apple caught my eye.

It depicts a haptics-enabled finger sleeve that can control augmented reality (AR) and virtual reality (VR) devices. This looks similar to the finger device patent we discussed a year ago in February 2020. And now we can see how the design is developing… 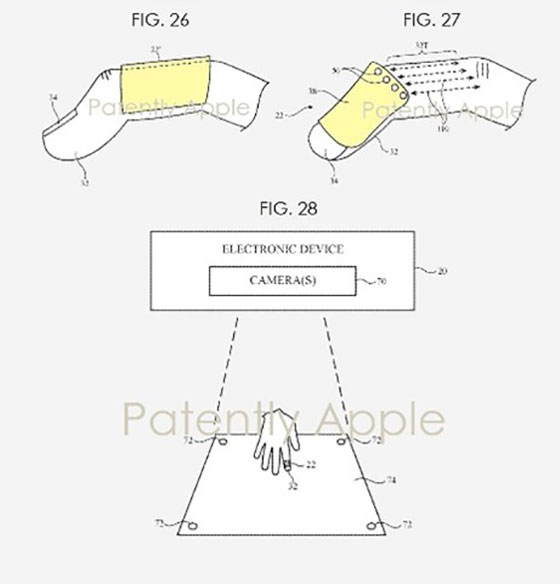 Haptics is a technology that simulates touch through strategic vibrations. At the simplest level, our phones vibrating when we receive a call is a form of haptics technology.

But this finger sleeve will employ more advanced haptics technology. Users will feel specific vibration patterns based on their actions. And in this case, it is a way for us to interact with a computing system.

For example, making certain motions with our finger will cause certain actions to happen on the AR/VR headset. And we’ll feel different vibration patterns on our fingers based on which actions are taken.

Most companies working on haptics technology have employed gloves. Wearing gloves will certainly allow for a range of different vibration patterns, but it also impacts the user’s ability to feel normal objects. And the user would look a bit awkward wearing them throughout the day.

The finger sleeve is a less intrusive approach.

If we think about mass-market consumer devices, they integrate into our daily lives. We can use the technology while doing other things as well. That’s not the same if we are wearing gloves. But it is absolutely seamless if all we’re wearing is a finger sleeve.

I know this sounds quirky, but wearing a well-designed version of the sleeve would be like having high-tech jewelry. It denotes a certain cultural status. And these sleeves would be highly functional as we use augmented reality throughout the day.

I envision consumers walking around with slim and sleek AR glasses and cool finger sleeves in a variety of colors and designs.

We can think back to when Apple launched its first iPods and its white headsets. They were all the rage. Then we moved on to AirPods, which have already evolved and improved. And the Apple Watch is now the best-selling watch in the entire industry. It’s also a status symbol for the “cool” and tech savvy.

Maybe Apple will call its new product the Apple “Touch.”

And I have to say that this makes me even more excited for Apple’s upcoming AR/VR product releases.

The latest news is that we will see a high-end product launch – probably a VR headset – in 2022. But I am still holding out hope that we could see at least a developer’s version launch in the fall of this year.

After all, we know from the contract manufacturing community that Apple started producing prototypes last year. That means Apple is close to locking in the design for the final product.

This is definitely a development I’ll be watching closely in the coming months.

Square is becoming a major player in the digital asset space…

Square just released its quarterly earnings report, and the numbers were quite impressive. And what jumped out at me most were the numbers related to the Cash App.

The Cash App was designed to be an alternative to a traditional bank account. Consumers can receive their paychecks directly through the app and then use it to spend their money however they see fit. And this includes the ability to do peer-to-peer payments with other Cash App users.

A few years back, Square added the ability to buy and sell bitcoin through the Cash App. At the time, this was just a bonus feature. It wasn’t something many consumers used.

In fact, consumers only bought $166.5 million worth of bitcoin from Square in 2018. That represented only 5% of the company’s net revenue for the year.

But that’s all changed. 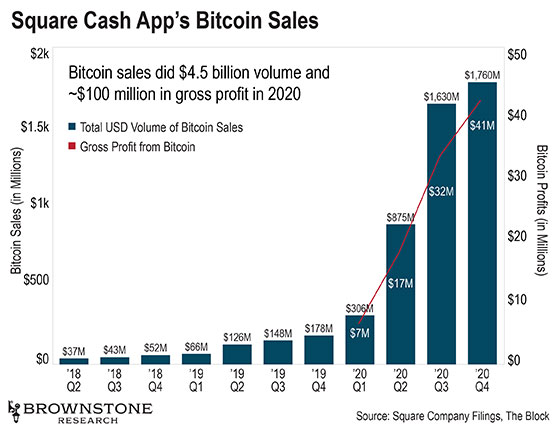 We saw an absolute explosion in bitcoin purchases through the Cash App last year. A wave of buying started in the first quarter and persisted throughout the entire year. Square ultimately sold $4.57 billion worth of bitcoin in 2020. This accounted for 48% of Square’s net revenue for the year. Amazing.

What’s striking about this is we are talking almost exclusively about normal retail investors here. Hardcore and regular cryptocurrency traders use the established exchanges like Coinbase, Gemini, and Binance to do their trading. They aren’t using the Cash App.

To me, this is almost like hearing about a stock tip in the barbershop. Retail investors typically come in at the end of a speculative rush, and heavy levels of retail investment often mark the top.

So I’m cautious on bitcoin right here in the short term. I suspect the digital asset has gone too far, too fast. It likely needs some time to cool off.

That said, Square just bought an additional $170 million worth of bitcoin for its Treasury. This boosts its bitcoin exposure from 1% to 5% of total assets. This is a sign of things to come.

If we think out 5–10 years into the future, I expect corporations will hold a meaningful portion of their Treasury reserves in digital assets.

This is something that only started to happen two quarters ago. These are still early days. We are at the beginning of a decade-long trend here.

So while I’m cautious on bitcoin in the near term, I remain long-term bullish.

As it stands, we are up 386% on our bitcoin holdings in my premium research service, The Near Future Report. And I think much bigger gains will come over time.

I got a chuckle from JPMorgan’s big announcement over the weekend.

The megabank announced that it successfully tested blockchain technology that enabled satellites orbiting the Earth to make payments with each other.

JPMorgan proclaimed that this was a big deal because there’s nothing more decentralized than two satellites in space conducting payments with one another.

This is a complete joke. It’s nothing more than a publicity stunt.

Satellites are designed to capture images and data from orbit and beam this information back down to Earth for analysis. We can then gain insights and make decisions based on this analysis.

There is no point for two satellites to exchange information with each other in space. If two different parties each own a satellite and have information that they would like to transact with, that transaction is going to happen here on Earth.

So JPMorgan is trying to make this out to be something spectacular when it’s not.

And let’s not forget that JPMorgan publicly called bitcoin a fraud just a few years ago. CEO Jamie Dimon even said that he would fire any employees caught trading the digital asset.

Why is the firm trying so hard now to paint itself as an expert in blockchain?

Well, banking executives have long tried to position their firms as technology companies. That’s because tech stocks receive a higher valuation in the markets than bank stocks.

One of the most critical red flags to watch out for when analyzing companies and investment opportunities is the marketing fluff pieces. Don’t let JPMorgan’s stunt fool you.

This company has a shoddy history in the industry. For years it tried to develop its own distributed ledger called Quorum, but it ended up dumping it to ConsenSys last year. Even the bank’s much-publicized JPM coin, which was designed as a U.S. dollar stablecoin, hasn’t gone anywhere.

The important developments in blockchain come from the innovative technology companies and teams that have been building this industry for the last 10 years. And the next 10 years are going to be even more fun.

And if you want to learn more about where I see real value in blockchain – and why I believe real change is coming to our financial system – go right here to see the presentation I recently put together on this topic.

P.S. For those who missed it, don’t forget to check out the replay of the presentation I gave alongside expert financial analyst Jason Bodner last week. We called it the Outlier Investment Summit.

I’ve followed Jason’s research for three years now, and it is fantastic. He and I both deeply understand the “games” being played on Wall Street.  And he shares my mission to level the playing field for normal investors.

In fact, Jason and I use many of the same techniques to determine the difference between a great investment opportunity and an average one. And Jason’s particular area of expertise is in finding the stocks that the Wall Street insiders are about to pour billions into, regardless of sector. That’s what leads to outsized investment gains.

And the best news of all is that Jason and his team have joined us here at Brownstone Research. His data-driven system will be yet another fantastic tool in our investment tool belt going forward.

So for readers who missed it last week, I highly recommend you tune in to the replay of our Outlier Investment Summit. We go over all the details of Jason’s system, and we show how readers of The Bleeding Edge can get immediate access to his research.

Just go right here for all the details.