It’s a natural question for anyone who missed making an investment in companies like Amazon, Tesla, NVIDIA, or Advanced Micro Devices (AMD). More recently, this question has popped up frequently with regards to blockchain technology and cryptocurrencies.

After watching the meteoric rise of digital assets like Bitcoin and Ethereum over the last few years, it’s normal to think that it will never happen again or that we’re too late. But it’s still early, and I’d like to show you why in a simple chart. 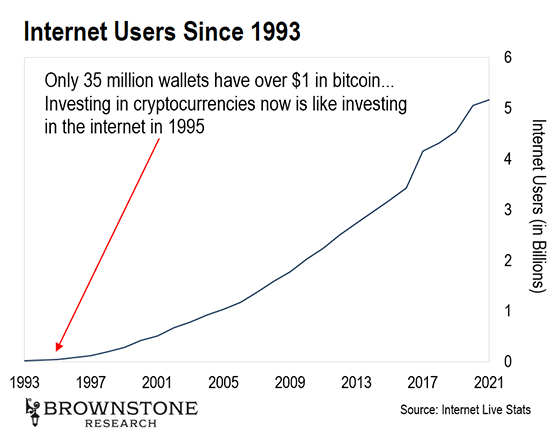 A year later in 1994, Netscape released its web browser. And by 1995, eBay, Yahoo, and Amazon all launched. And the rest is history…

Blockchain technology is the underlying technology for what is often referred to as Web 3.0. Whatever we call it, it is the next generation of the internet, financial services, gaming, social media, and art and collectibles all rolled into one.

And by looking at this one simple chart, we can easily see how early we still are. The number of bitcoin wallets that hold more than $1 worth of bitcoin is only 35 million. This is an excellent proxy for the number of active bitcoin users. It’s like being back in 1995 in the world of Web 2.0. It’s wild to think about it that way. It’s like the internet was 26 years ago.

That’s why it’s still early. And that’s why the world of digital assets and Web 3.0 has its biggest gains ahead. It is absolutely not too late. We have at least a decade of excitement ahead of us with digital assets.

And this time, it will be different. It won’t take 25 years to get to five billion users. The rate of technology adoption is happening at a speed we’ve never seen before.

I believe that we’ll get there in less than 10 years – a fraction of the time that it took for the internet. And it might even happen in just five years.

It’s not too late…

And as the market for cryptos and other assets takes off, there will be even more chances for early investors to jump in on this trend. If you’re interested in knowing more about the best investment opportunities in blockchain right now, you can find out more here. 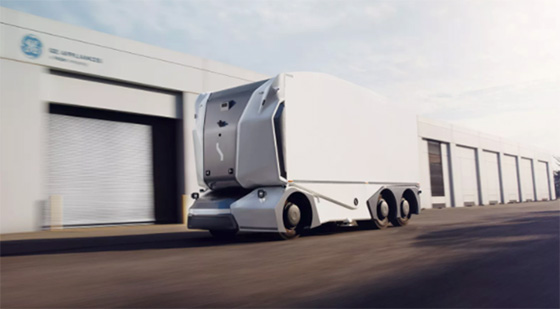 Notice anything strange about this truck? There’s no cab. It’s just like a pod with cargo space attached to it. It may look odd, but this design makes perfect sense.

Almost all the other autonomous trucking companies out there have attempted to retrofit normal semi-trailers with self-driving technology. Einride went a different route. It produced a completely new cab-less design.

Of course, this makes it impossible to have a safety driver in the truck in case something goes wrong. But Einride addressed that issue in a clever way. The company has a command center where humans can monitor and control the trucks if they need to. 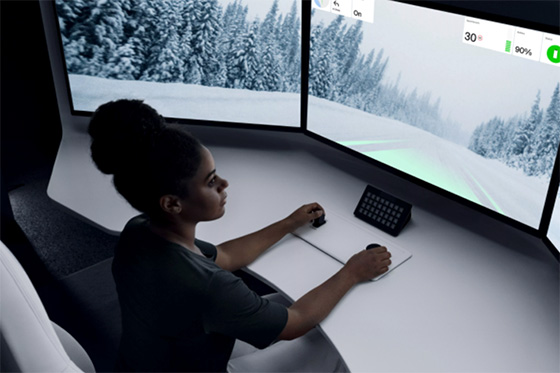 This is a dynamic we have talked about before. Here we have humans overseeing and, when necessary, interacting with autonomous technology.

The people operating out of Einride’s command center can see what the self-driving truck “sees” in real time. And they can step in and control the truck whenever there is a tricky situation like a traffic jam or construction site.

And here’s the kicker – one truck operator could oversee 10–20 trucks at the same time. That’s a labor force multiplier. That’s powerful. Especially when we think about the labor shortages and supply crunches we are seeing right now.

Much of the ongoing supply chain problem can be traced back to America’s ports.

When the system is working properly, ships deliver goods to the docks, where workers will transport them to trucks for delivery. But right now, there aren’t enough dock workers to keep up.

As a result, goods aren’t getting to the trucks in a timely fashion. And since most port truckers are paid by the load, not by the hour, they don’t want to take on any dock deliveries. Doing so would cut their loads down to just one per day, which would reduce their income substantially.

Einride’s autonomous truck is a fantastic solution to this problem.

Instead of one person driving one truck, the experienced truckers could control a fleet of autonomous trucks from the command center. Under those circumstances, truckers wouldn’t lose money by taking on deliveries from the ports.

We’re going to see rapid adoption of autonomous trucking technology deployed at ports, logistics hubs, and for point-to-point delivery from one distribution hub to another. (To profit from the current supply chain crunch, go right here for more details.)

And that’s great news for companies like Einride. We’ll keep a close eye on this space going forward.

More evidence that the digital assets industry is maturing…

One of the biggest shortfalls in the digital asset industry has been a lack of customer support. The entire industry has been built on speed, with the focus on fundamental infrastructure. And that’s fine for tech-savvy users capable of managing their own trades with nothing but a wiki to go on.

But the industry absolutely needs to provide better customer support if we want to reach widespread retail adoption. And as we can see from the chart I showed at the beginning of today’s Bleeding Edge, there is a long way to go.

Consumers who aren’t comfortable with the technology aren’t going to use digital assets unless they know there is support when they need it, and their assets are safe and insured.

Coinbase One is the first step in that direction. It’s a strong signal that we are moving past the early adopter phase in the digital assets space. Broad retail adoption is coming.

This is an exciting development. With the added telephone support and insurance protection, a Coinbase account now looks a lot more like the standard brokerage from the customer’s perspective. That’s critical.

So this is very bullish for digital assets, cryptocurrencies, and the blockchain industry as a whole.

And it’s just the latest reason I want to make sure my followers don’t miss out on this trend. If anyone hasn’t yet explored this space, please go right here to learn more.

Miso Robotics just announced its second-generation robot for the fast-food industry. The robot is called Flippy 2. And it is a major improvement upon the original Flippy.

We first talked about Flippy and Miso Robotics back in October of last year. At the time, Flippy was capable of flipping burgers on the grill and then transferring them to buns at a different workstation.

It was interesting… but Flippy still required a lot of human help. Somebody had to position the robot in the right place for it to perform its functions. That’s too much of a limiting function for fast-food restaurants to invest. It just didn’t result in much of an efficiency gain.

And that’s where Flippy 2 comes in…

Flippy 2 is loaded with artificial intelligence (AI) and computer vision (CV) so that it is fully automated. The robot can position itself correctly with no human intervention necessary.

And Flippy 2 can work the grill and the fry station simultaneously without any oversight. Once the food is ready, Flippy 2 will transfer it to a preparation station where humans can dress it up and get it out to customers.

What’s more, Flippy 2 is much smaller than the original. It takes up about 56% less aisle space than Flippy 1, which makes it far less cumbersome in the kitchen. That’s important for ensuring that fast-food kitchens can be retrofitted with the technology.

And Miso Robotics has partnered with White Castle to unleash Flippy 2 upon the world. The robot will make its debut in White Castle’s Chicago 42 location. From there, White Castle plans to install the robot in up to 10 more locations next year.

Given the labor shortages that have hit the fast-food industry hard this year, I wouldn’t be surprised to see other restaurants step up and install robots like Flippy 2 as well. There’s no doubt we will see a quick proliferation of robotics in the restaurant industry going forward.

In fact, the pandemic and the ongoing labor shortages have easily pulled the adoption of AI and robotics forward by five years or so. That’s something I’ll talk more about in the 2022 prediction series I’ll be sharing in the coming weeks.

And, of course, this opens the door to all kinds of fantastic opportunities.