Things have been looking up over the last few months.

In most places, restrictions are being lifted, life is awkwardly returning to normal, and most have accepted that we’re going to have to live with it. And in some places, like Florida, things have been normal for a long time.

Contrary to what we were told was going to happen due to Florida’s lack of pandemic restrictions, it has fared remarkably well with its focus on early treatment. And its economy has absolutely thrived. And over the weekend, the state reported the lowest daily COVID-19 cases per capita in the country.

From a global perspective, almost eight billion doses of vaccine have been given. That’s more doses than there are people on the planet. There is a glut of vaccines. They’re just not evenly distributed around the planet.

Yet rather than celebrate and open up, public health officials and the mainstream media were pounding the drums with fear and panic over yet another variant of COVID-19 – dubbed Omicron.

The World Health Organization (WHO) somewhat humorously skipped over two letters in the Greek alphabet to name variant B.1.1.529. Next up was Nu, but it’s pronounced in the same way that “new” is pronounced.

That would have certainly caused confusion a few months down the road when the next mutation occurs, and a “new variant” is named… not the “Nu variant.” That would have been funny.

After Nu comes Xi, which just has to make us chuckle. After all, Xi is the surname of the General Secretary of the Chinese Communist Party who is also the President of the People’s Republic of China.

It’s no matter then that Xi is pronounced something like “gazeye” in Greek, or that Xi in Chinese is pronounced “shi.” The optics would have been too bad for the WHO to have done so.

So Omicron was next up in the Greek alphabet. Sounds ominous.

The U.K. has already banned flights from South Africa, where the variant was discovered, along with flights from five other neighboring countries. The U.S. has gone even further, banning flights from eight countries in the southern part of the African continent.

As of a few hours ago, 11 cases of Omicron have been identified in the U.K., and two cases have also emerged in Australia.

What makes the emergence of these new COVID-19 cases so embarrassing for public health officials is that they were all discovered in individuals who were fully vaccinated. It should be painfully obvious now that the vaccines do absolutely nothing at all to stop the spread.

But the public health officials and politicians simply won’t be honest with us. They just keep digging a deeper hole. And there is clearly a lot more that they know that they aren’t sharing with us, and I don’t think it is good news.

Days ago, a group of professors and scientists from prestigious universities like Brown, Harvard, UCLA, and Yale grouped together and filed a lawsuit under the Freedom of Information Act to gain access to all of the data around the Pfizer COVID-19 vaccine trials.

One would like to think that this information would already be available for scientists to review… but it’s not. And the U.S. Food and Drug Administration’s (FDA) response to the request for the information is that it will be made available in 55 years. That’s not a typo.

Pfizer and Moderna quickly jumped into the fray, offering up new booster shots to counteract Omicron. Moderna’s president was even happy to instill fear in all by saying, “It was all the mutations we didn’t want to see in one variant” when referring to Omicron.

It’s no surprise they want to instill fear and panic. After all, the pandemic has been great for certain pharmaceutical companies. Oxfam International reported earlier this year that nine billionaires have been minted at these biopharma companies for vaccines that don’t stop us from contracting COVID-19.

And yet with all this fear about Omicron, none of the media is asking one simple question. Is it a dangerous variant? To me, this would seem to be the most important thing for us to understand.

Here’s what Dr. Angelique Coetzee, the chair of the South African Medical Association, had to say:

What we are seeing clinically in South Africa – and remember I’m at the epicenter of this where I’m practicing – is extremely mild. For us [these are] mild cases. We haven’t admitted anyone. I’ve spoken to other colleagues of mine and they give the same picture.

There it is straight from the horse’s mouth. And it’s obviously not the cause for the fear and panic that the press, our public health officials, and the biopharma industry would like to instill in us.

This ridiculous cycle has to stop.

Sandbox – one of the prominent metaverses leading the pack right now – just raised $93 million in its Series B funding round. The company’s valuation was not disclosed, but it’s almost certainly north of $1 billion now. That would make it a unicorn.

And this shows us how fast the metaverse trend is moving…

As a reminder, the metaverse refers to a virtual world in which people can meet and interact with one another. But there won’t be just one. There will be many different metaverses to choose from – each with its own themes and characteristics.

And Sandbox’s approach is quite interesting. It is an Ethereum-based platform that allows players to buy and develop their own land. This shapes the world within the metaverse.

Players do this by creating in-game objects in the form of non-fungible tokens (NFTs). These objects are then placed within the metaverse in order to build out different areas. 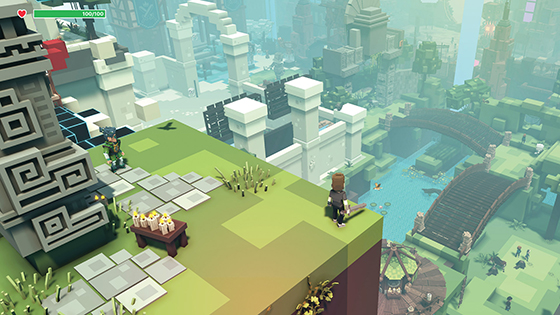 Here we can see that buildings, bridges, and other objects make up this particular area within Sandbox. These items are each NFTs that a player used to build out this part of the metaverse.

Of course, each parcel of land must be purchased with Sandbox’s digital token SAND. And the value of SAND has skyrocketed 770% since the end of October. As I write, one SAND is worth $6.67. That’s up from about 75 cents several weeks ago.

And here’s how I know that Sandbox is likely a unicorn – the company holds about 22% of the outstanding token supply. Given that SAND’s market cap is about $6 billion currently, that means Sandbox’s holdings are worth about $1.3 billion. That’s quite a feat, considering nobody had heard of this project a year ago.

And given the massive Series B raise, we can expect Sandbox to expand quickly from here.

This is definitely a metaverse that we’ll be tracking closely, and for some, it might even be one that we’ll play a part in.

Another metaverse funding round caught my eye. Upland just raised $18 million in its Series A1 funding round. That values the company at $300 million.

Upland is an interesting contrast to Sandbox. While Sandbox is geared toward letting players create their own worlds, Upland seeks to recreate the existing world inside its metaverse. Here’s how…

The geography within Upland, including the cities and even street addresses, will mimic that of Earth. That means players can buy land (in the form of NFTs) in areas that are familiar to us.

Right now, there are 13 cities up and running in Upland. And interestingly, the cost of land in Upland mirrors the price differentials we see in real life.

For example, a parcel of land a few blocks away from Central Park in New York City may cost $5,000, but a piece of land in a smaller town can be purchased for $100 or so. That’s proportional to what we would expect in the real world.

And here’s the hook – players determine what to do with their land once they purchase it. In other words, they choose what buildings and businesses are built at each address. So the physical address and geographic location will match up with the real world, but the structures at that address could be drastically different.

In this way, players are free to reimagine the real world within Upland’s metaverse. That’s an interesting concept. And it seems to be catching on…

As I write, there have been more than $2 million worth of digital real estate sales within Upland. That’s across over 100,000 new digital landowners.

Upland will add new cities to the metaverse using the capital it just raised in its Series A1 round.

This is another exciting metaverse project to keep an eye on. And this is a great example of how there will be many different metaverses with their own designs, economies, and social dynamics.

We’ll wrap up today with an update on the GPT-3 saga. It seems Microsoft now controls who gets access to the technology…

To bring new readers up to speed, GPT-3 is fantastic artificial intelligence (AI) technology created by OpenAI. Specifically, GPT-3 is a natural language processor capable of understanding our words and generating output.

At its simplest level, GPT-3 can complete our sentences as we type. Many of us who use Office 360 have experienced this feature.

In addition, the AI can write short stories and technical manuals based on user input. And it can even create code on command. It’s an incredible piece of technology that got Silicon Valley humming.

Microsoft just announced that it is launching a new Azure OpenAI Service to provide access to GPT-3 on an invitation-only basis.

According to Microsoft, only people with an “acceptable” use case will be granted access to GPT-3. Approvals will be determined on a case-by-case basis, and Microsoft said that it will continue to monitor usage to ensure that it is deemed appropriate.

What we are looking at here is basically a sublicensing business. Microsoft got the exclusive license from OpenAI, and now it is turning around to sublicense the technology to others.

But my question is this – should we really trust Microsoft to be GPT-3’s gatekeeper? After all, should large corporations have the agency to determine which use cases are appropriate and which aren’t?

And, of course, the real kicker is that Microsoft is limiting this new service to customers who use Microsoft’s Azure Cloud Services.

As we have discussed before, Azure has been a laggard in the cloud services industry. It has a reputation for not being very flexible and agile, which is why Azure revenues have trailed so far behind Amazon Web Services (AWS) and Google Cloud.

So Microsoft is using GPT-3 to boost its Azure business. That’s understandable, but it presents some additional concerns…

Remember, Microsoft’s record on the security front has not been good.

After all, the Microsoft Exchange server was hacked last year. That turned out to be one of the biggest nation-state hacks of all time. And it exposed an unimaginable number of private and public sector networks.

Then this past July, Microsoft’s LinkedIn platform suffered another massive data breach that compromised the data of roughly 92% of its users.

So I don’t think the industry is going to be very receptive to Microsoft calling the shots around GPT-3. I’m curious to see if there will be some pushback in the months to come.