One of the questions that I get a lot when asked about 5G technology and the future of transportation is, “Doesn’t 5G enable self-driving cars? Won’t 5G be necessary for autonomous driving technology to work?”

The answer is no, but there is actually a lot of nuance to the answer…

The misperception that self-driving cars need 5G comes from a simple misunderstanding.

Many believe that the car has to connect back to some kind of centralized computer in the cloud to receive instructions on what to do when it is driving. That’s not the case. In fact, if it were the case, we’d be in pretty big trouble.

The reality is that advanced forms of self-driving technology are able to “think.”

What Tesla is now demonstrating with its latest version of artificial intelligence (AI), embodied in its Full Self Driving (FSD) software, is a perfect example.

Using neural networks – a form of AI – Tesla’s FSD software can ingest all the data coming from its cameras and sensors in real time and infer the correct action to take in a split second… Faster, in fact, than human reaction times. No 5G is required. The AI is capable of operating independently in the field at the edge of the network.

And Waymo’s version of self-driving technology – which I experienced for myself in Phoenix very recently – also does not use 5G. Waymo’s approach is far more preprogrammed than Tesla’s.

Its deployment is geofenced in a specific area and has predefined pickup spots depending on where you are hailing a ride from. It’s far less impressive from my perspective compared to what Tesla is doing, but it’s still exciting nonetheless.

That said, while not required, 5G technology is being built into new Tesla models. After all, faster, near-zero latency wireless technology is always better.

And Tesla can use those wireless connections to upgrade software over the wireless networks. It also collects real-world data when its cars are in self-driving mode and sends that information back to headquarters.

The data is used to train and improve the performance of the self-driving technology. The AI is capable of learning and improving as it gains more and more experience around the world… just like us humans.

Where 5G will come in very handy, and arguably become a necessity, is in the deployment of fleets of autonomous vehicles.

With near-zero latency and the high bandwidths that 5G enables, teams that manage fleets will occasionally need to “beam in” to help out in a sticky situation. They will have real-time video and audio of a situation, access to all of the sensor data, communication with the passenger, and the ability to determine the best way forward.

This capability will also be useful in the context of managing fleets of self-driving trucks used for the distribution of products. Semitrailers are already capable of driving themselves on highways, but I envision the need for professional drivers to support the docking and undocking at loading bays in distribution facilities.

Beaming into the truck at those start and finish points using 5G technology will enable real-time control over the vehicle with a multi-angle view of the truck – just as if you were sitting in the front seat looking at the rearview mirror and the two side mirrors.

Just imagine a room full of truck drivers in a central command center sitting at desks with a wheel in hand and a panel of LCD screens. That is literally what several companies in the space are working on today.

If this kind of technology sounds interesting, you might enjoy watching my briefing, which includes footage of me testing out one of Waymo’s self-driving cars in Phoenix. Seeing is believing, and I think you’ll be surprised.

Tonight, the replay of my confidential briefing goes offline. If you haven’t yet learned about Apple’s big plans and how this ties into 5G and autonomous driving – and how these megatrends will lead to a $12.3 trillion profit opportunity – then please make sure to watch right away.

The fastest unicorn in history…

We have to start today with something absolutely unheard of in the private markets.

A company called Pacaso just went from zero at launch to a $1 billion valuation in five months. This is the fastest company in history to achieve unicorn status. And its latest funding round this month puts the company at $1.5 billion.

With this unbelievable rise to unicorn status, we might think that Pacaso is working on a bleeding-edge form of artificial intelligence. Or maybe it’s a hot social media startup that went viral. But it’s not.

However, Pacaso is doing something very interesting. It is facilitating the sale of fractional shares in premium vacation homes.

A Pacaso House for Sale 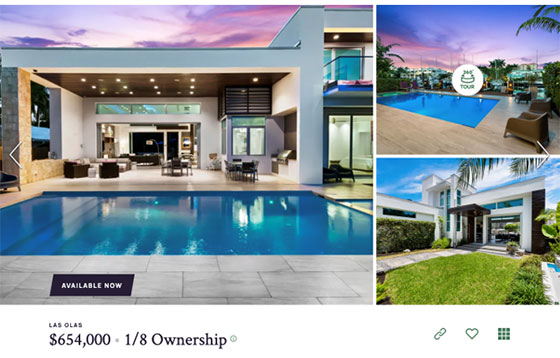 Here is a beautiful home Pacaso has listed in Fort Lauderdale, FL.

The home is valued at $4.5 million. That’s out of range for most people. But Pacaso is offering 1/8th ownership for $654,000. Suddenly, that becomes affordable to a wider range of consumers.

So Pacaso is solving a difficult problem for consumers that are aspiring to own a second home in a fantastic place.

Many people love the idea of owning a luxury vacation home. But for most of us, it’s just not affordable or practical. Pacaso changes that.

Pacaso goes out and raises debt to acquire luxury homes in hot vacation markets. Fort Lauderdale and Miami… Breckenridge, CO… Park City, UT… Palm Springs, CA… and similar areas are among the top choices. And because interest rates are so low, this is a low-risk proposition for the company.

Then Pacaso sets up a limited liability company (LLC) to own each property, and it breaks that ownership up into fractions. When Pacaso sells fractional ownership, the buyer becomes a co-owner of the LLC. For the home above, buyers would each own 1/8th of the LLC.

From there, Pacaso uses the funds received to pay off the debt it took on to buy the property.

The company then generates additional revenue by providing property management services. It takes care of all maintenance, cleaning, and upkeep. To cover these costs, each owner shares an equal amount of the expenses each month.

And in return, Pacaso provides a platform that allows each owner to make reservations just like they would at a hotel. Naturally, each owner is allotted time proportional to their ownership interest. In the example above, each owner would be granted 6.5 weeks each year. That’s 1/8th of the year.

So Pacaso is eliminating the complexities around buying, owning, and maintaining a vacation home. Consumers simply come up with the financing to buy their ownership stake, and they share in monthly expenses. Pacaso handles everything else.

And of course, this has all been enabled by technology. Pacaso simplified the entire process using tech all the way down to the scheduling, which is done using a smartphone application.

It’s perhaps not surprising that Pacaso was founded by two ex-Zillow executives. These guys know a lot about applying technology to the real estate markets.

I suspect Pacaso is on to something. This is the next generation of time-share properties, and it is far superior. This could become a major trend for second homes.

And given how well Zillow has been doing with its own home buying and selling, Pacaso is worth keeping an eye on. And who knows, maybe a few Bleeding Edge subscribers will take fractional ownership in a new second home…

Walmart is stepping up its game…

Walmart just made a big announcement. This year, the company plans to roll out autonomous deliveries in Miami, FL; Austin, TX; and Washington, D.C.

To do this, Walmart is partnering with Ford and self-driving startup Argo AI. We talked about this pair back in July. At the time, the two companies announced a partnership with Lyft to launch an autonomous ride-hailing service in Miami and Austin.

Here’s a look at the cars Walmart used in its testing: 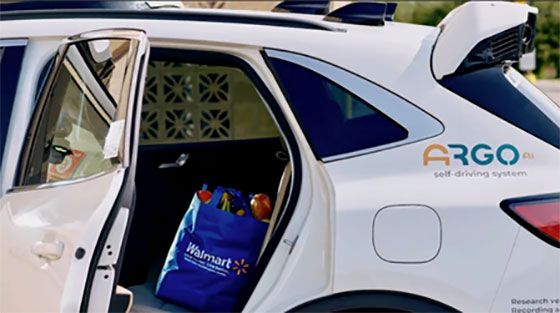 When fully deployed, consumers place an online order with Walmart, and employees load up the bags in a car fitted with Argo’s self-driving tech. Then the car drives itself to your home to make the delivery. All we’ll have to do is step outside, open the door or trunk, and grab our things.

And it’s all going live in the next three months…

Walmart is ramping up its delivery capabilities here in a very cost-effective way. Obviously, the driver is the most expensive part of the delivery process. Without a driver in the front seat, Walmart can keep its e-commerce prices ultra-competitive.

What’s more, this is a solution to the ongoing labor shortage that’s hit shipping and logistics companies especially hard. We talked about UPS’s plan to combat its massive labor shortage earlier this week.

(This is one piece of the larger “tech shock” situation going on right now… If you want to learn more about this, please go here to watch my recent presentation.)

And to me, it’s clear that this is all an attempt to keep pace with Amazon.

One of the biggest advantages Amazon has in e-commerce is its own extensive logistics network. That was especially true during the pandemic when online shopping took off.

Amazon has also been experimenting with its own self-driving car services in partnership with Zoox. No doubt Walmart took note of that. This is its response.

So we are witnessing what’s become a heavyweight, head-to-head competition between Walmart and Amazon. Both companies are taking different approaches. And it all works for the benefit of consumers.

I’m very excited to see how Walmart’s autonomous delivery service does at launch. And we can be sure that the retail giant will roll this out to more cities as we move into 2022.

Self-driving cars are spreading across China…

In another major development in the autonomous driving space, Baidu just provided an update on its Apollo Go robotaxi service. Baidu plans to deploy 200 robotaxis in Shanghai. And it will deploy 500 robotaxis across 30 additional cities in China.

As a reminder, Baidu is China’s version of Google. And it mirrors much of Google’s strategy consistently. We can see that with its robotaxi launch.

Much like Google’s Waymo, Baidu will launch its cars with Level 4 autonomy. That means they will have a safety driver in the front seat just in case something goes wrong.

Plus, the cars will operate within a geofenced area. There will be predetermined stations where the self-driving cars pick up and drop off passengers.

This gives us some insight into Baidu’s AI development. It’s clearly not as advanced as Tesla, which is now rolling out version 10 of its Full Self-Driving (FSD) package to drivers.

This gives Tesla’s AI the ability to navigate complex roads in real time. The routes do not need to be preprogrammed, and there don’t need to be any predetermined pick-up and drop-off points.

That said, this is still a great service that Baidu is launching. This kind of service is like a very affordable form of public transportation. It’s a great alternative to taking a crowded bus or train.

And the scale of Baidu’s launch is quite ambitious. Deploying 700 robotaxis in a short period of time is no small feat. The advantage of doing so in so many cities, however, is that it will accelerate its data collection efforts.

And as we know, more data is necessary to improve the performance of an AI. That’s really what Baidu is up to with this latest announcement.

So this is another example of how self-driving cars are coming on much faster than the experts predicted. This is a trend that we will continue to follow closely here at Brownstone Research.