To understand the impact of the U.S. government’s current monetary policy on the private markets, we only need to look at one chart.

The U.S. venture capital industry has been on a steady uptrend over the last 10 years, rising from $31.9 billion invested in 2010 to $164.3 billion last year. That’s more than a 5x increase over the span of a decade.

Those numbers alone are remarkable… Even more so considering that 2020 was the year of the pandemic and economic lockdowns. And investment levels still managed to surpass the previous record of 2018.

Where is it all coming from?

Ironically, it wasn’t from venture capitalists. Sovereign wealth funds, hedge funds, pension funds, hedge funds, and even mutual funds have been driving the spike in investment levels. Institutional funds like these participated in 42% of all venture financing in the second quarter.

And the nuance is that this institutional capital accounted for more than 75% of all funds invested. Incredible! The VCs are getting crowded out of their own business. And they are having to compete to allocate capital more than ever before.

This is an incredible market to be raising capital in. When a central bank like the Federal Reserve is printing trillions of dollars of stimulus, and interest rates are being kept artificially low resulting in 10-year treasury yields materially lower than U.S. GDP growth, this is exactly what happens.

Institutional money is forced to deploy capital into assets capable of generating returns far above bonds, inflation, and a broad market index. And there is no better place than early stage technology and biotechnology.

In a market where so much private capital is chasing low-quality deals, that would be a recipe for disaster. But right now, that isn’t the case at all.

We’re in a market where I’ve never seen so many high-quality companies, promising technologies, and disruptive ideas that will create unbelievable value for society and bring extraordinary wealth to investors.

All this capital is simply accelerating technological advancement. It can’t be stopped, and apparently neither can the government’s irresponsible fiscal policy.

As investors, our best defense is to have a strong offense and make sure that we are investing in ways that will benefit from these unique market dynamics.

When the money train starts to slow down, we’ll know when to step to the side and avoid the wreck.

This company could be the future of cross-border payments…

Our first story today is about the blockchain project Stellar and its potential deal to acquire the money transfer business MoneyGram.

Stellar’s platform already helps people and companies move value around the world. And the proposed deal would improve its usage by combining its blockchain technology with MoneyGram’s remittance services.

It is a pretty significant event for several reasons. First, the fact that a blockchain company is taking over an 81-year-old traditional money transfer company is somewhat unprecedented. Naturally, we would expect it to be the other way around.

Another reason is MoneyGram’s relationship with Ripple.

Readers may remember we spoke about MoneyGram a couple of years ago when Ripple acquired a $30 million stake in the company. The two aimed to use Ripple’s cross-border transfer tech to decrease the cost of international money transfers from around $30 to just a few pennies.

The partnership was promising until about seven months ago… That’s when the Securities and Exchange Commission (SEC) filed a lawsuit against Ripple.

The SEC accused Ripple of selling unregistered securities. And now Ripple is going toe to toe with regulators in a historic ruling for the blockchain industry. So far, it appears to be faring well in the battle.

Yet while Ripple is fighting the lawsuit and even the government on behalf of the blockchain industry, its partnership with MoneyGram came to a screeching halt. This was unfortunate, but it didn’t come as a surprise under the circumstances. The two announced their partnership was ending in March of this year.

Now Stellar is sliding in to steal some of its business. But there is some interesting nuance here…

Ripple and Stellar have a bit of a backstory already. The cofounder of Ripple is Jed McCaleb, who left the company in 2013. When he left, he essentially took Ripple’s blockchain technology with him and used it to build Stellar a year later. And now he’s made a play for MoneyGram.

It’s a bold move and one that is likely to make Stellar a major force in the industry.

This news is promising. As a reminder, in the early days of Stellar, the payment processor Stripe invested $3 million in its seed funding round. If the two form a partnership on the heels of the MoneyGram deal, we would witness widespread blockchain usage in the payments industry.

MoneyGram has more than two billion accounts around the world. Stripe has 1.98 million websites using its technology.

The potential for these entities to facilitate easier cross-border transactions is very exciting.

This is a fascinating development for Stellar. And with more than $2 billion worth of XLM in its treasury and plenty of cash on hand, it can certainly get the deal done on the more than $900 million company.

A computer that can stick to your hand…

The flexible technology acts like a low-powered computer that can be applied to substrates like plastic, paper, and metal foil. It would be like putting a small computer in a tiny sticker.

They are 9 millimeter (mm) by 7.8 mm chips with a thickness of less than 30 micrometers, or roughly that of a human hair. 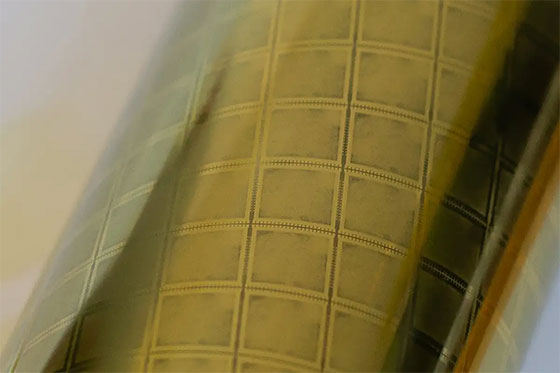 ARM’s semiconductor is a proof of concept rather than a commercially available product right now. Yet the flexible semiconductors can open up a host of new use cases in our everyday lives.

One industry where they could see a lot of use is in health care. Doctors could use these flexible semis to measure the health vitals of their patients. That would reduce the need for bulky monitors around your hospital bed.

They could also be used to add sensors that measure temperature and humidity in a variety of objects. And because they are so small and inexpensive, they are disposable.

Making them disposable and low cost opens up use cases like detecting the ripeness of fruit on a farm, or using them throughout the supply chain to track if food spoils in transit.

There is a lot of potential here that will definitely be explored in the coming years.

And while the potential use cases are fascinating, the leap in development is even more impressive.

Yet this is not just a 50% or 100% improvement. It is a 12x improvement in terms of its complexity compared to the previous chips under development. It’s an exponential leap in growth in just the last year or two.

And while this technology is not commercially available yet, we can expect it to be in the next two years.

Readers might remember when we spoke about NVIDIA announcing its plan to acquire ARM for $40 billion.

NVIDIA is the most valuable semiconductor company in the world, generating $16.7 billion in revenue annually. That makes it a great match for putting this tech in the hands of users.

And this provides even greater confidence in NVIDIA’s long-term strength. Subscribers of The Near Future Report have held the company for 459% gains since it was recommended in 2019, and we’ll look forward to even bigger gains going forward.

The success of Jeff Bezos’ 11-minute flight into space aboard his Blue Origin rocket is the latest proof that the demand for space travel is immense.

As we covered in The Bleeding Edge two weeks ago, Bezos, his brother, astronaut Wally Funk, and Oliver Daemen – Blue Origin’s first commercial flight traveler – traveled above the Kármán line, which marks the boundary between Earth’s atmosphere and outer space.

When the flight touched down in the desert of Texas, you could see the euphoria of the newest space travelers.

Here’s a clip of them exiting the capsule of Blue Origin’s New Shepard rocket shortly after they landed.

The flight went perfectly. And with the world watching this historic flight, Blue Origin opened for business. The reservations piled in as the live stream aired around the world.

During the post-flight press conference, we found out that Blue Origin had already sold $100 million in tickets for space travel.

And if we do some back-of-the-envelope math, we can see just how much demand there is.

If we assume each seat went for $250,000, that means 400 people have signed up. Each Blue Origin flight can seat six customers. This means Blue Origin has filled up approximately 66 flights above the Kármán line.

With one to two launches per month, this comes out to nearly four years of flights already booked. This signals multiple years of demand showing up in only a few days.

And it’s not just Blue Origin…

Virgin Galactic’s reservation list already has 600 names willing to pay $250,000 per ticket. And that flight does not even go above the Kármán line.

This is an incredible indication of the level of excitement around commercial space travel. The entire industry was validated in the span of two weeks in July. And this will certainly fuel further investment into the industry.

It also tells us people are growing comfortable enough with these two methods of transportation. They feel safe enough to sign up for a trip like this.

Seeing both the founder of Virgin Galactic, Richard Branson, and Jeff Bezos – along with his brother – willing to go up on both of these historic flights was a major vote of confidence for would-be travelers.

The response by willing flyers on the heels of these two launches is very encouraging for future space flight. And it is a sign that commercial space travel will continue to grow as an industry…

P.S. The replay of my Outlier Investments Summit that aired last Wednesday will remain up just a couple more days. So if you haven’t yet learned about the “glitch” I’ve found in the stock market… please don’t wait too long.

You can go right here to catch the replay… and learn the name and ticker of the top “glitch” stock that’s recently hit my radar.