The floodgates have opened.

And we need look no further than the current market for initial public offerings (IPOs). 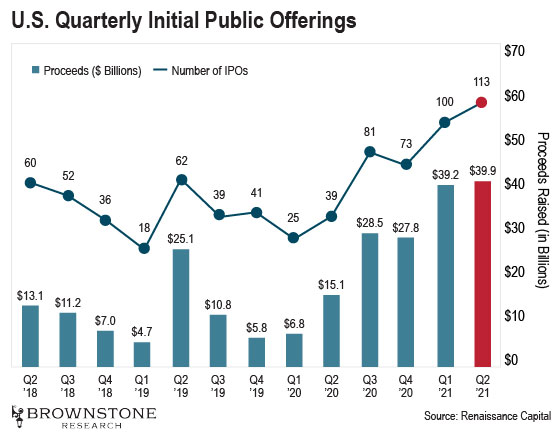 At 113 IPOs this quarter, we’re now in the most active quarter for IPOs since the 2000 tech bubble. And yet we are not in a bubble at all… At least not yet.

More than a decade of venture capital and private equity firms keeping thousands of high-growth companies to themselves caused this market distortion. Eventually, limited partners expect to have an exit. And that’s what we are seeing now.

With record-low interest rates, unprecedented levels of dry powder (capital looking for a home), and an energized retail investor base, we have the perfect mix for an incredible IPO market.

In fact, the last two quarters were groundbreaking. Combined, $79.1 billion has been raised across 213 IPOs. And we still have a few more days before we close out the quarter.

2020 was an unparalleled year for capital raised in IPOs, and 2021 has already exceeded last year. And there are some very large IPOs lining up for the second half of the year.

Bleeding Edge subscribers won’t be surprised to hear which sectors have been the most active in the IPO market. Tech and biotech/medtech dominated the IPO landscape. These two sectors made up 78% of all IPOs in the second quarter.

And that’s exactly where we’re going to stay focused. This is where we’ll see the highest growth and find the most attractive investment returns.

This trend still has a lot of life left in it given the number of private companies lining up to go public, combined with the record level of venture capital investment that I’m seeing right now.

We have a lot to look forward to.

Readers might remember the last time we wrote about ByteDance. Its TikTok app – which allows users to share short, self-produced videos – is very popular with teenagers and young adults. In fact, it became the fastest social media app to reach one billion users.

Since then, its numbers have exploded in terms of revenue and user growth. And even though it is still a private company, we got a glimpse at its growth metrics.

Its revenue, which is primarily driven by ad sales, grew 111% from the previous year, reaching $34.3 billion. Its gross profit nearly kept pace with 93% growth, reaching $19 billion.

This is in part because of the platform’s reach. In its recent report to its employees, ByteDance mentioned it has 1.9 billion monthly active users (MAU).

For reference, Facebook has 2.85 billion MAU, and Twitter has over 350 million MAU. This puts ByteDance between these two social media titans.

The TikTok app has a global reach, and it has yet to show signs of slowing down.

However, the incredible part here is the security threat TikTok poses to its own users.

Bleeding Edge readers might remember when we wrote how the TikTok application acts like malware. It collects data from users’ phones and sends it back to China.

That’s why the U.S. has tried in the past to ban the application from online stores. And while many might dismiss this as a U.S.–China issue, it’s not just the U.S. that is saying it’s a threat. The company has even been called out in its home country.

The Chinese government added TikTok to a list of applications that participate in excessive collection of personal data from users.

In fact, the application pings a phone’s GPS roughly every 30 seconds. TikTok has clearly gone even further than Google and Facebook in terms of data collection in order to sell to ad agencies.

The interesting part here, though, is that users don’t seem to care. The company has continued its explosive growth despite these privacy concerns.

Its growth figures have put ByteDance’s valuation on par with some of the most successful high-growth tech companies.

And similar to the U.S., companies in China are staying private for longer. This allows venture capitalists and private capital to capture almost every bit of value from these companies before making them available to retail investors.

To keep ByteDance’s growth in perspective…

In December 2020, the company was rumored to be valued at $180 billion. And it is now valued near $400 billion. If ByteDance doubles its figures from here, it will be valued similar to Facebook.

Social media applications like TikTok are witnessing massive growth and valuations even as the pandemic ends.

And it isn’t just happening to ByteDance. That leads me to our next topic…

Another unicorn has been born… It’s a social media app called IRL. IRL stands for “in real life.” And it focuses on group chat and coordinating group events.

Readers might remember another audio-based social media app we talked about before – Clubhouse. During the pandemic, it saw immense growth and now has a valuation pegged at $4 billion.

That’s why this new app is so interesting. IRL improves on Clubhouse by focusing on the group chat experience that younger generations prefer.

And IRL combines it with “event discovery.” In other words, it helps users find out about virtual or in-person concerts, parties, e-sports tournaments, and more.

There is a cultural shift taking place in social media, as many younger people view Facebook, Instagram, and Twitter as apps for “older” generations. Hard to believe.

When younger generations are outside of school, their free time is spent in groups. They place a higher value on these group chats versus one-on-one communication.

We see this with popular gaming apps. Users come and go throughout the day, and they hang out with their friends.

And while the IRL application is only used by 12 million MAU and generates no revenue, it’s raising significant capital from investors.

Earlier this month, IRL raised $170 million in its Series C round, which puts the company at a $1 billion valuation. This follows the Series B raise just nine months prior, when the company raised $16 million.

And investors are placing a premium on technology targeting this social media approach. It’s why SoftBank jumped into this deal.

SoftBank bought into the Series D round in October of 2018, when ByteDance was valued at $75 billion. It is now worth $360 billion, certainly one of its best investments. I suspect returns on IRL will be more impressive.

These new social mediums are experiencing major growth in a narrow timeframe. IRL could quickly become the next Clubhouse or TikTok since it appeals to the younger generation in ways that Facebook, Twitter, and Instagram currently don’t. Another upstart in the space that I’m keeping a close eye on right now is Muze.

It acquired DeepMap, a six-year-old mapping company started by the former tech executives of Google, Baidu, and Apple. Baidu is China’s version of Google.

DeepMap set out to create a tech platform where car sensors could accurately map areas and streets down to a centimeter. To accomplish its goal, the team used a method that relies on a network of cars and their sensors to continuously update maps. The more cars on the network, the more current its global maps are.

This contrasts the way Google Maps operates. Google’s mission was to map the entire planet. And it did much of this by literally driving every street on the planet. Thanks to this, we can basically “teleport” ourselves anywhere in the world with its street view functionality.

The problem is these maps might not get updated for years. That makes it nearly impossible to navigate roads autonomously using data solely from Google Maps.

In order for cars to reach Level 5 – full autonomy – they will need to be able to react to real world conditions, which are always changing. The goal is for maps to be updated in real time.

This is precisely what DeepMap enables through data collection using the sensors on autonomous vehicles. And it is why NVIDIA’s purchase is so interesting.

While the specifics of the deal are not public, we do know DeepMap was last valued at $450 million in 2018, and it has raised over $90 million since it began. My guess is that NVIDIA probably paid around $1 billion for the company.

But despite NVIDIA probably paying a large sum, this looks like a great move.

NVIDIA’s strategy toward autonomous driving is unique. Early on, the company made strategic moves not just in hardware development (semiconductors), but also in software investments. NVIDIA could have stuck to semiconductors.

But it developed its own autonomous driving AI platform. This is essentially a full-stack approach to self-driving technology that it can sell/license to automotive manufacturers.

NVIDIA is now taking the next step and acquiring one of the best companies in the space to bolt it into its software offering. DeepMap’s technology will actually enable NVIDIA to improve the performance of its own autonomous driving AI and ultimately compete with Tesla and Waymo.

With DeepMap on its side, automotive customers won’t need to license software from a company like Argo AI or Aurora to enable self-driving cars.

And it makes NVIDIA’s growing line of products for the auto sector very competitive.

Witnessing moves like this convinces me that NVIDIA will be one of the strongest companies in the space. And with its strong cash flow, it can make strategic moves like this with limited impact to its financial strength.

NVIDIA will continue to be one of the strongest players in the autonomous tech space and one of the best ways to gain exposure to this explosive trend.

P.S. If you still haven’t caught the replay of Silicon Valley “Unlocked,” then please go right here soon! This video, which shows investors how to profit from “Penny IPOs,” won’t stay up much longer.